Estimating the parameters of probabilistic models of language such as maxent models and probabilistic neural models is computationally difficult since it involves evaluating partition functions by summing over an entire vocabulary, which may be millions of word types in size. Two closely related strategies---noise contrastive estimation (Mnih and Teh, 2012; Mnih and Kavukcuoglu, 2013; Vaswani et al., 2013) and negative sampling (Mikolov et al., 2012; Goldberg and Levy, 2014)---have emerged as popular solutions to this computational problem, but some confusion remains as to which is more appropriate and when. This document explicates their relationships to each other and to other estimation techniques. The analysis shows that, although they are superficially similar, NCE is a general parameter estimation technique that is asymptotically unbiased, while negative sampling is best understood as a family of binary classification models that are useful for learning word representations but not as a general-purpose estimator. 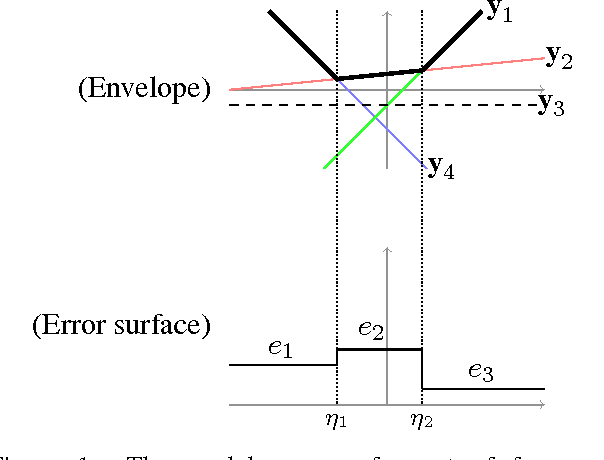 We describe the line search used in the minimum error rate training algorithm MERT as the "inside score" of a weighted proof forest under a semiring defined in terms of well-understood operations from computational geometry. This conception leads to a straightforward complexity analysis of the dynamic programming MERT algorithms of Macherey et al. (2008) and Kumar et al. (2009) and practical approaches to implementation. 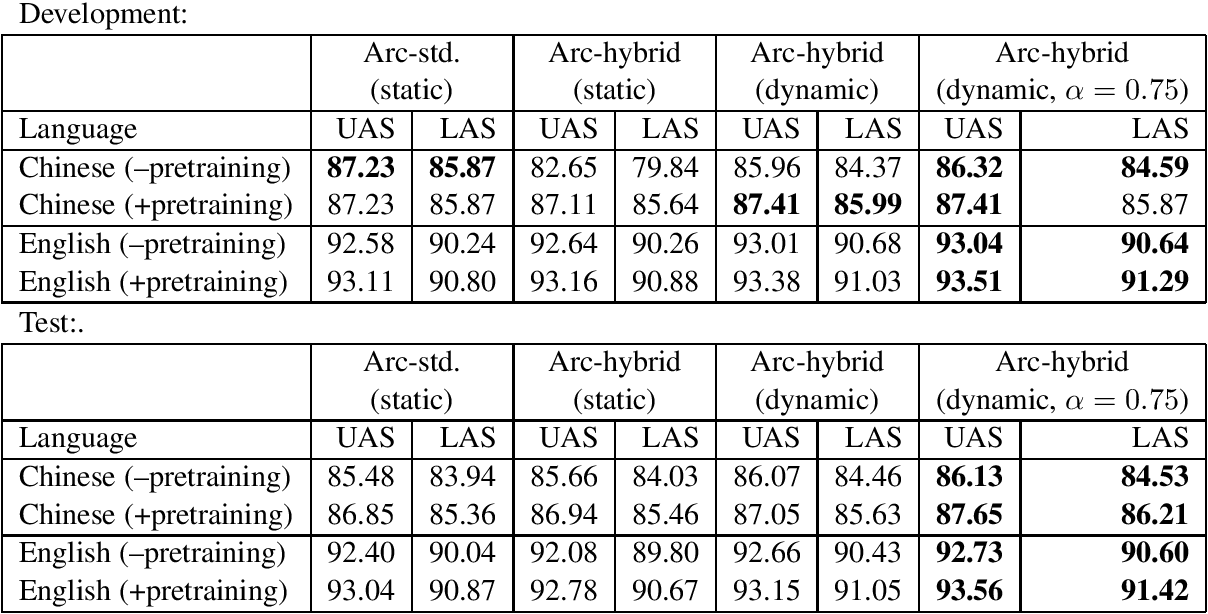 We adapt the greedy Stack-LSTM dependency parser of Dyer et al. (2015) to support a training-with-exploration procedure using dynamic oracles(Goldberg and Nivre, 2013) instead of cross-entropy minimization. This form of training, which accounts for model predictions at training time rather than assuming an error-free action history, improves parsing accuracies for both English and Chinese, obtaining very strong results for both languages. We discuss some modifications needed in order to get training with exploration to work well for a probabilistic neural-network. 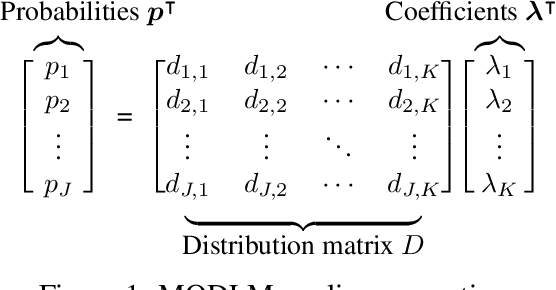 Language models (LMs) are statistical models that calculate probabilities over sequences of words or other discrete symbols. Currently two major paradigms for language modeling exist: count-based n-gram models, which have advantages of scalability and test-time speed, and neural LMs, which often achieve superior modeling performance. We demonstrate how both varieties of models can be unified in a single modeling framework that defines a set of probability distributions over the vocabulary of words, and then dynamically calculates mixture weights over these distributions. This formulation allows us to create novel hybrid models that combine the desirable features of count-based and neural LMs, and experiments demonstrate the advantages of these approaches.

Learning to Represent Words in Context with Multilingual Supervision

We present a neural network architecture based on bidirectional LSTMs to compute representations of words in the sentential contexts. These context-sensitive word representations are suitable for, e.g., distinguishing different word senses and other context-modulated variations in meaning. To learn the parameters of our model, we use cross-lingual supervision, hypothesizing that a good representation of a word in context will be one that is sufficient for selecting the correct translation into a second language. We evaluate the quality of our representations as features in three downstream tasks: prediction of semantic supersenses (which assign nouns and verbs into a few dozen semantic classes), low resource machine translation, and a lexical substitution task, and obtain state-of-the-art results on all of these. 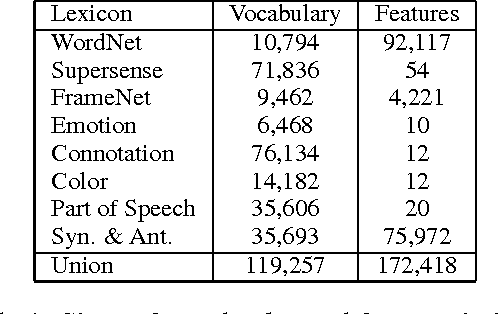 Data-driven representation learning for words is a technique of central importance in NLP. While indisputably useful as a source of features in downstream tasks, such vectors tend to consist of uninterpretable components whose relationship to the categories of traditional lexical semantic theories is tenuous at best. We present a method for constructing interpretable word vectors from hand-crafted linguistic resources like WordNet, FrameNet etc. These vectors are binary (i.e, contain only 0 and 1) and are 99.9% sparse. We analyze their performance on state-of-the-art evaluation methods for distributional models of word vectors and find they are competitive to standard distributional approaches.

A Critical Analysis of Biased Parsers in Unsupervised Parsing 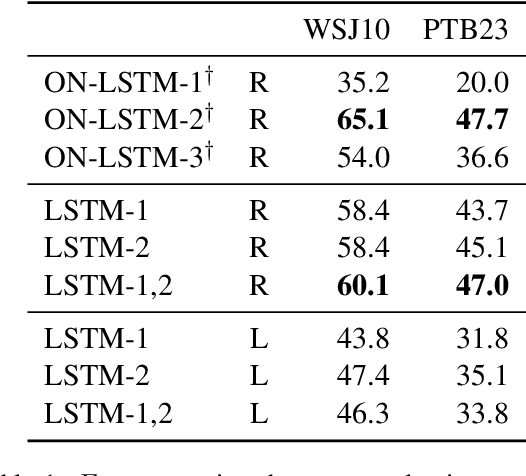 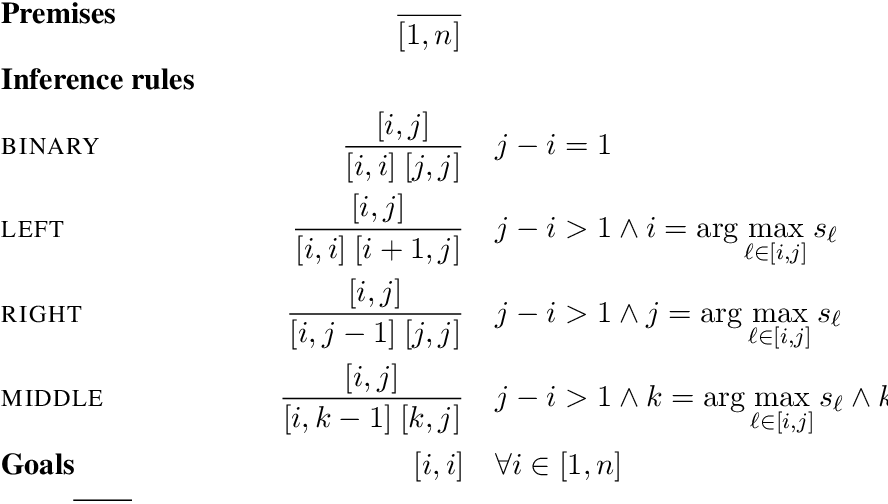 A series of recent papers has used a parsing algorithm due to Shen et al. (2018) to recover phrase-structure trees based on proxies for "syntactic depth." These proxy depths are obtained from the representations learned by recurrent language models augmented with mechanisms that encourage the (unsupervised) discovery of hierarchical structure latent in natural language sentences. Using the same parser, we show that proxies derived from a conventional LSTM language model produce trees comparably well to the specialized architectures used in previous work. However, we also provide a detailed analysis of the parsing algorithm, showing (1) that it is incomplete---that is, it can recover only a fraction of possible trees---and (2) that it has a marked bias for right-branching structures which results in inflated performance in right-branching languages like English. Our analysis shows that evaluating with biased parsing algorithms can inflate the apparent structural competence of language models. 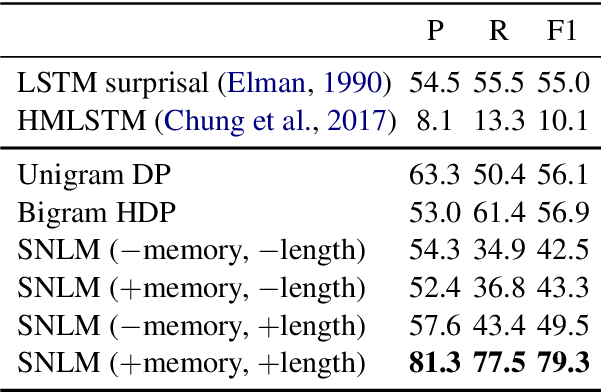 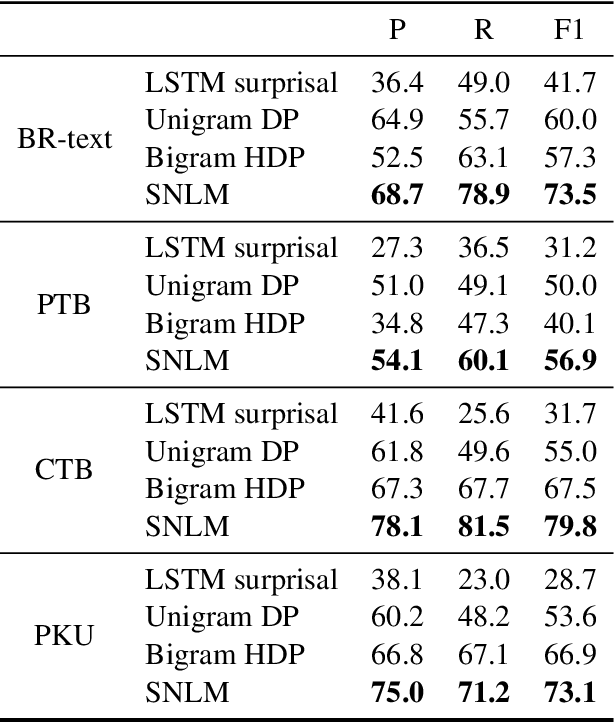 We propose a segmental neural language model that combines the representational power of neural networks and the structure learning mechanism of Bayesian nonparametrics, and show that it learns to discover semantically meaningful units (e.g., morphemes and words) from unsegmented character sequences. The model generates text as a sequence of segments, where each segment is generated either character-by-character from a sequence model or as a single draw from a lexical memory that stores multi-character units. Its parameters are fit to maximize the marginal likelihood of the training data, summing over all segmentations of the input, and its hyperparameters are likewise set to optimize held-out marginal likelihood. To prevent the model from overusing the lexical memory, which leads to poor generalization and bad segmentation, we introduce a differentiable regularizer that penalizes based on the expected length of each segment. To our knowledge, this is the first demonstration of neural networks that have predictive distributions better than LSTM language models and also infer a segmentation into word-like units that are competitive with the best existing word discovery models. 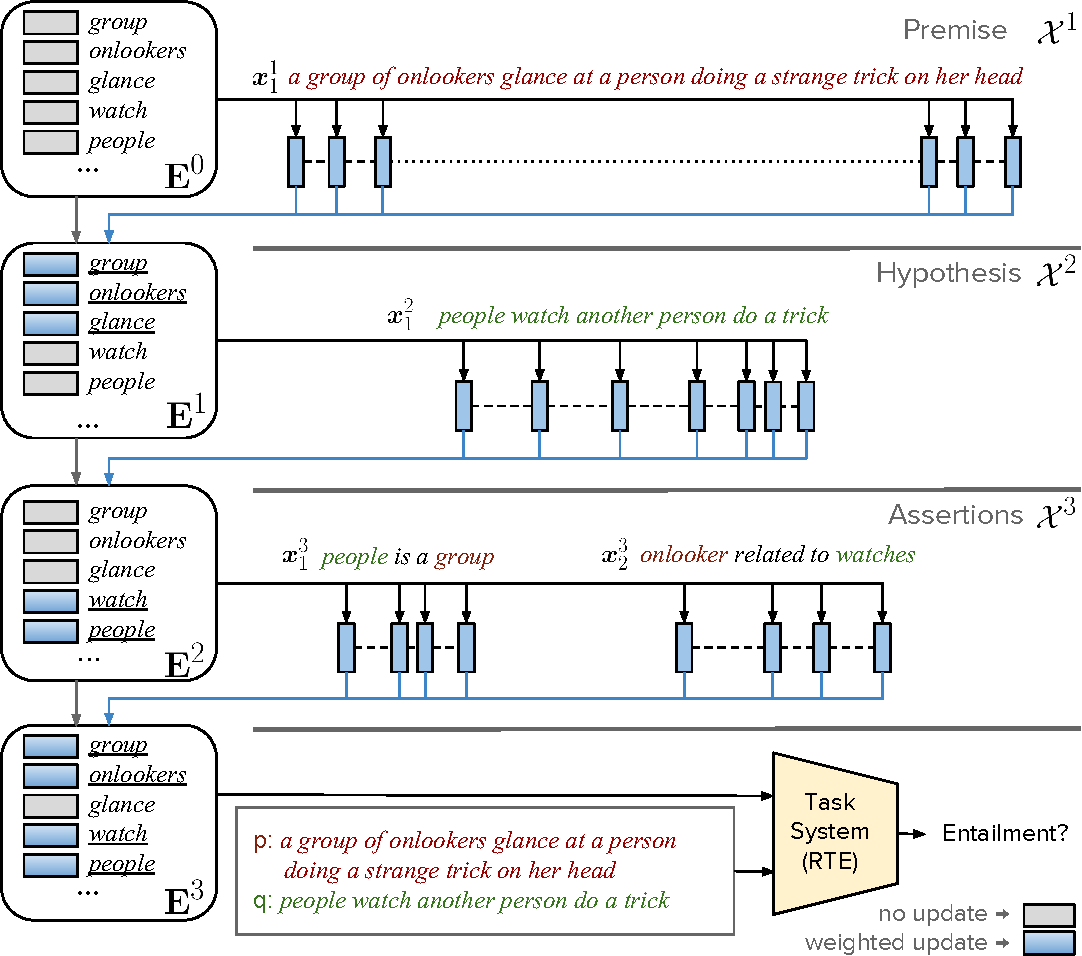 Common-sense and background knowledge is required to understand natural language, but in most neural natural language understanding (NLU) systems, this knowledge must be acquired from training corpora during learning, and then it is static at test time. We introduce a new architecture for the dynamic integration of explicit background knowledge in NLU models. A general-purpose reading module reads background knowledge in the form of free-text statements (together with task-specific text inputs) and yields refined word representations to a task-specific NLU architecture that reprocesses the task inputs with these representations. Experiments on document question answering (DQA) and recognizing textual entailment (RTE) demonstrate the effectiveness and flexibility of the approach. Analysis shows that our model learns to exploit knowledge in a semantically appropriate way. 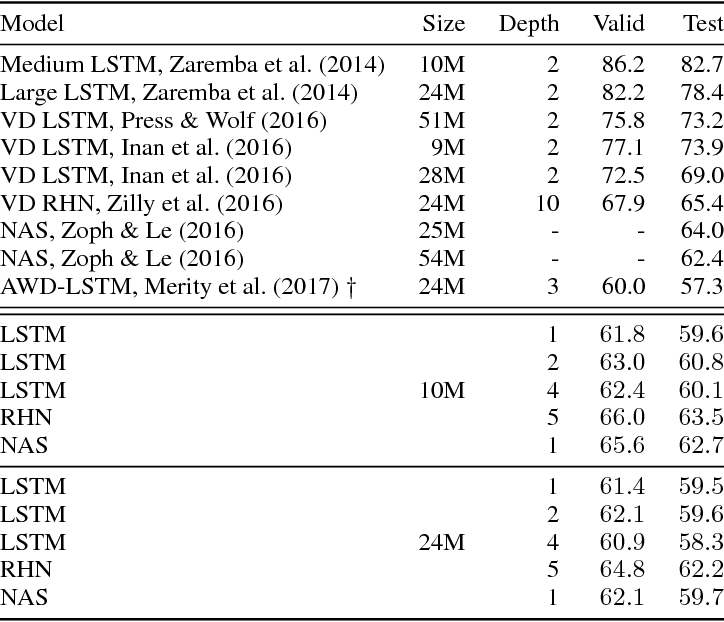 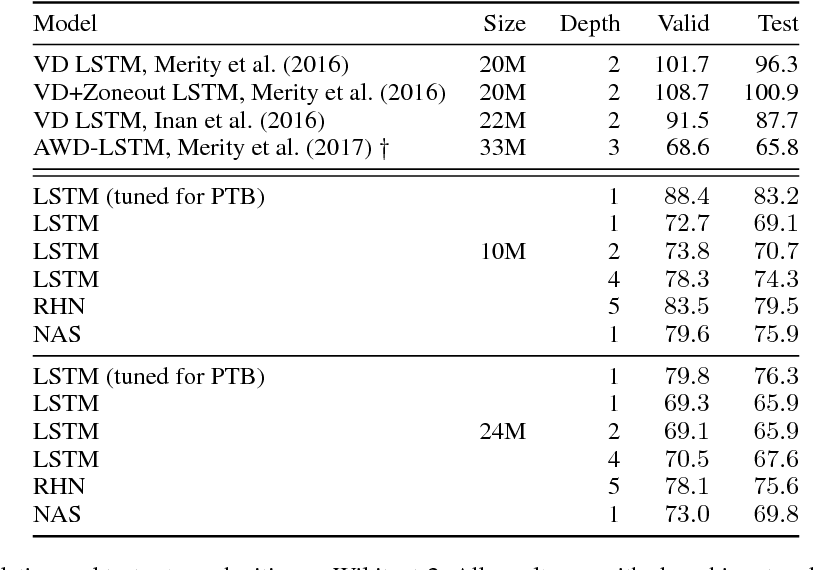 Ongoing innovations in recurrent neural network architectures have provided a steady influx of apparently state-of-the-art results on language modelling benchmarks. However, these have been evaluated using differing code bases and limited computational resources, which represent uncontrolled sources of experimental variation. We reevaluate several popular architectures and regularisation methods with large-scale automatic black-box hyperparameter tuning and arrive at the somewhat surprising conclusion that standard LSTM architectures, when properly regularised, outperform more recent models. We establish a new state of the art on the Penn Treebank and Wikitext-2 corpora, as well as strong baselines on the Hutter Prize dataset. 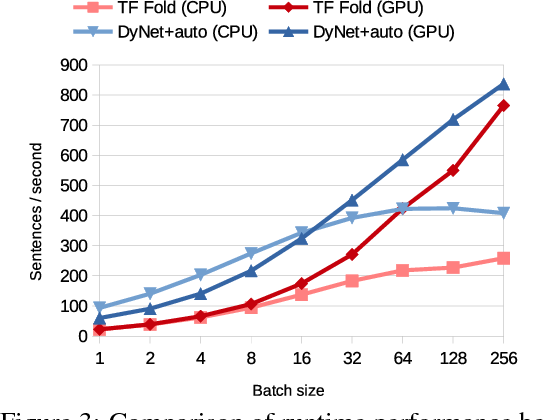 Dynamic neural network toolkits such as PyTorch, DyNet, and Chainer offer more flexibility for implementing models that cope with data of varying dimensions and structure, relative to toolkits that operate on statically declared computations (e.g., TensorFlow, CNTK, and Theano). However, existing toolkits - both static and dynamic - require that the developer organize the computations into the batches necessary for exploiting high-performance algorithms and hardware. This batching task is generally difficult, but it becomes a major hurdle as architectures become complex. In this paper, we present an algorithm, and its implementation in the DyNet toolkit, for automatically batching operations. Developers simply write minibatch computations as aggregations of single instance computations, and the batching algorithm seamlessly executes them, on the fly, using computationally efficient batched operations. On a variety of tasks, we obtain throughput similar to that obtained with manual batches, as well as comparable speedups over single-instance learning on architectures that are impractical to batch manually. 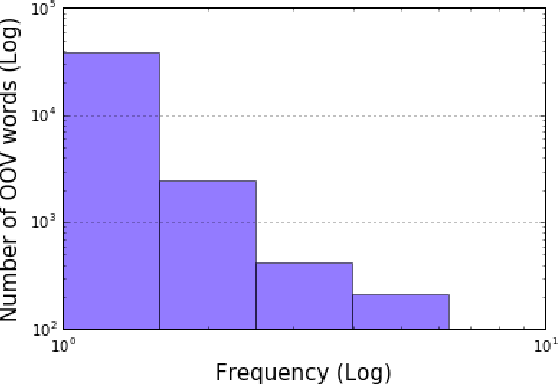 Fixed-vocabulary language models fail to account for one of the most characteristic statistical facts of natural language: the frequent creation and reuse of new word types. Although character-level language models offer a partial solution in that they can create word types not attested in the training corpus, they do not capture the "bursty" distribution of such words. In this paper, we augment a hierarchical LSTM language model that generates sequences of word tokens character by character with a caching mechanism that learns to reuse previously generated words. To validate our model we construct a new open-vocabulary language modeling corpus (the Multilingual Wikipedia Corpus, MWC) from comparable Wikipedia articles in 7 typologically diverse languages and demonstrate the effectiveness of our model across this range of languages. 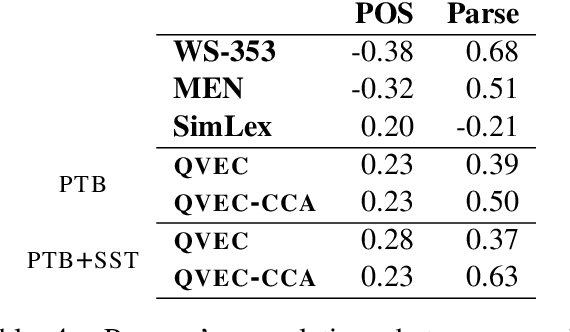 We introduce QVEC-CCA--an intrinsic evaluation metric for word vector representations based on correlations of learned vectors with features extracted from linguistic resources. We show that QVEC-CCA scores are an effective proxy for a range of extrinsic semantic and syntactic tasks. We also show that the proposed evaluation obtains higher and more consistent correlations with downstream tasks, compared to existing approaches to intrinsic evaluation of word vectors that are based on word similarity. 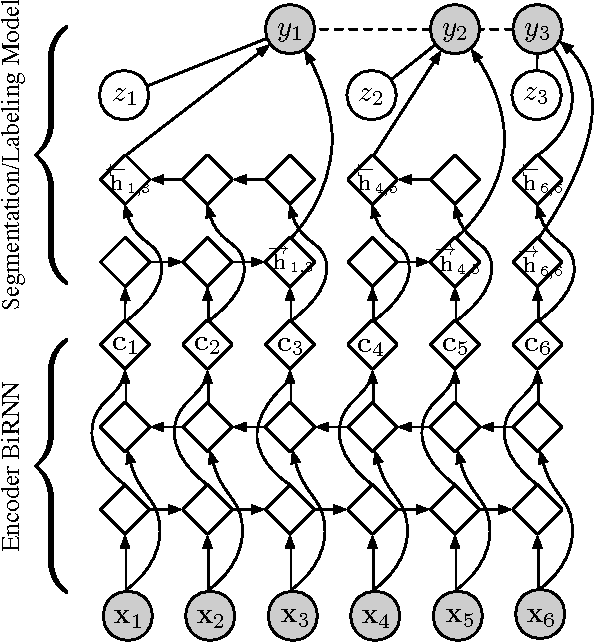 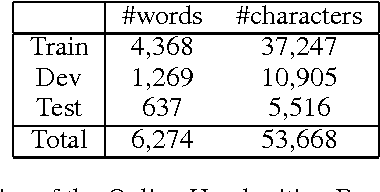 We introduce segmental recurrent neural networks (SRNNs) which define, given an input sequence, a joint probability distribution over segmentations of the input and labelings of the segments. Representations of the input segments (i.e., contiguous subsequences of the input) are computed by encoding their constituent tokens using bidirectional recurrent neural nets, and these "segment embeddings" are used to define compatibility scores with output labels. These local compatibility scores are integrated using a global semi-Markov conditional random field. Both fully supervised training -- in which segment boundaries and labels are observed -- as well as partially supervised training -- in which segment boundaries are latent -- are straightforward. Experiments on handwriting recognition and joint Chinese word segmentation/POS tagging show that, compared to models that do not explicitly represent segments such as BIO tagging schemes and connectionist temporal classification (CTC), SRNNs obtain substantially higher accuracies.

We present extensions to a continuous-state dependency parsing method that makes it applicable to morphologically rich languages. Starting with a high-performance transition-based parser that uses long short-term memory (LSTM) recurrent neural networks to learn representations of the parser state, we replace lookup-based word representations with representations constructed from the orthographic representations of the words, also using LSTMs. This allows statistical sharing across word forms that are similar on the surface. Experiments for morphologically rich languages show that the parsing model benefits from incorporating the character-based encodings of words.

We introduce a framework for unsupervised learning of structured predictors with overlapping, global features. Each input's latent representation is predicted conditional on the observable data using a feature-rich conditional random field. Then a reconstruction of the input is (re)generated, conditional on the latent structure, using models for which maximum likelihood estimation has a closed-form. Our autoencoder formulation enables efficient learning without making unrealistic independence assumptions or restricting the kinds of features that can be used. We illustrate insightful connections to traditional autoencoders, posterior regularization and multi-view learning. We show competitive results with instantiations of the model for two canonical NLP tasks: part-of-speech induction and bitext word alignment, and show that training our model can be substantially more efficient than comparable feature-rich baselines. 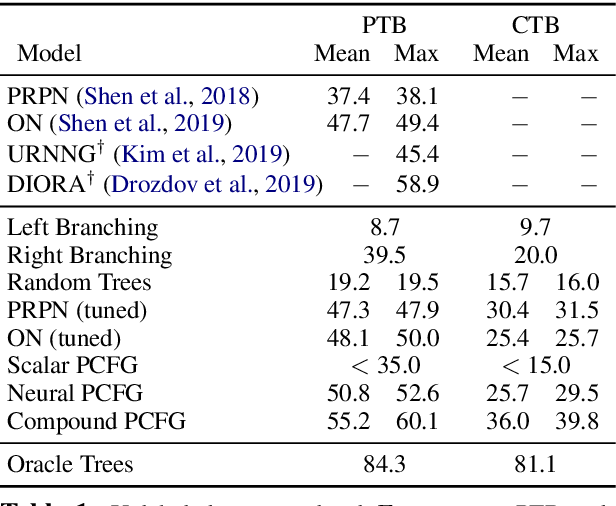 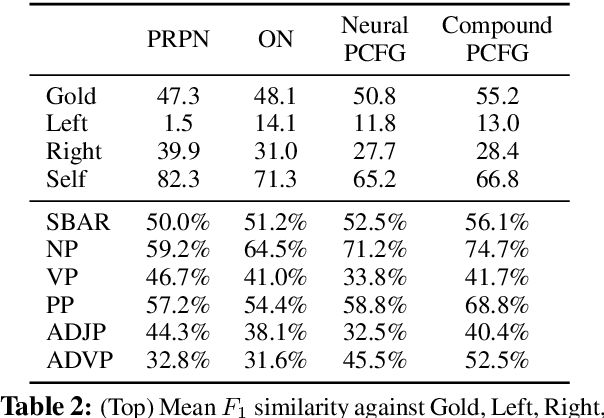 We study a formalization of the grammar induction problem that models sentences as being generated by a compound probabilistic context-free grammar. In contrast to traditional formulations which learn a single stochastic grammar, our context-free rule probabilities are modulated by a per-sentence continuous latent variable, which induces marginal dependencies beyond the traditional context-free assumptions. Inference in this grammar is performed by collapsed variational inference, in which an amortized variational posterior is placed on the continuous variable, and the latent trees are marginalized with dynamic programming. Experiments on English and Chinese show the effectiveness of our approach compared to recent state-of-the-art methods for grammar induction.