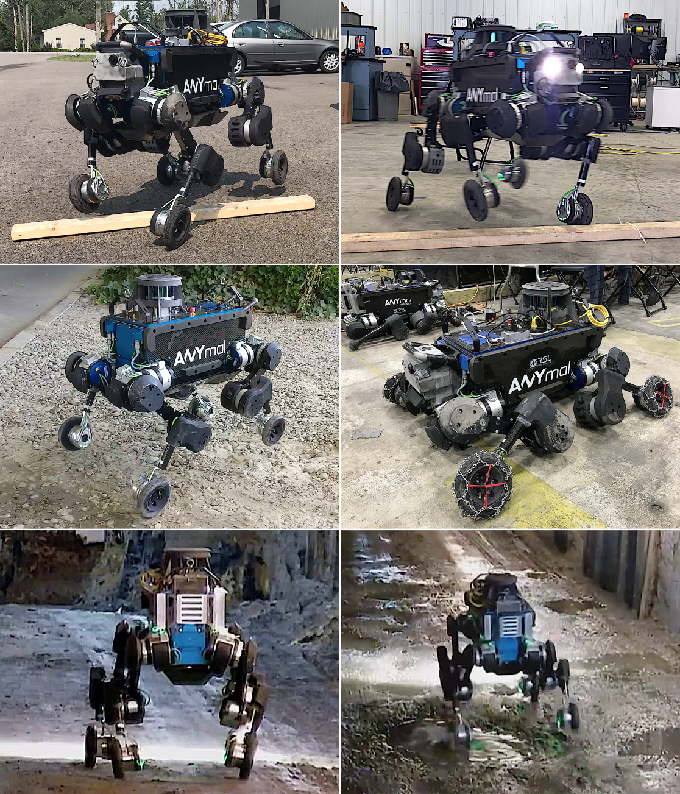 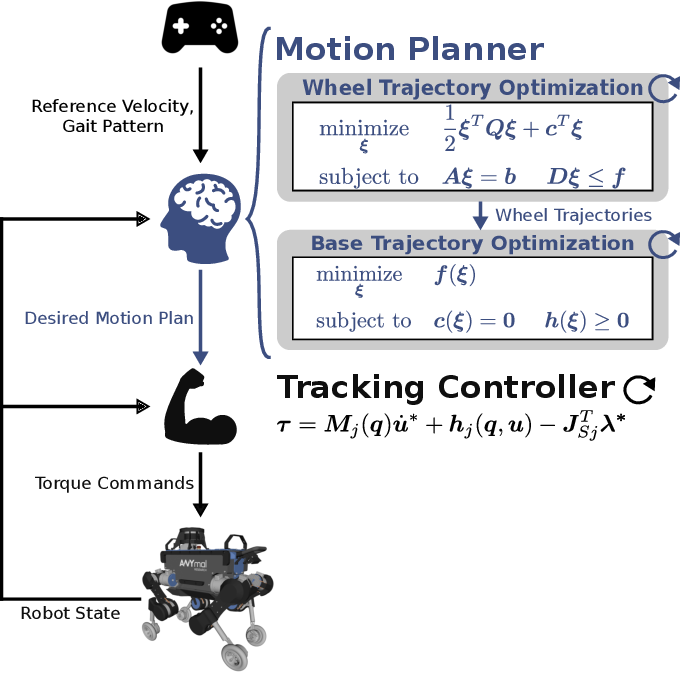 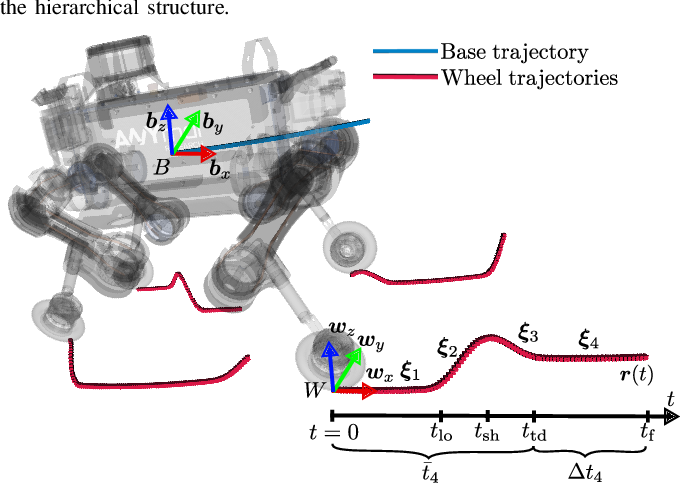 Wheeled-legged robots have the potential for highly agile and versatile locomotion. The combination of legs and wheels might be a solution for any real-world application requiring rapid, and long-distance mobility skills on challenging terrain. In this paper, we present an online trajectory optimization framework for wheeled quadrupedal robots capable of executing hybrid walking-driving locomotion strategies. By breaking down the optimization problem into a wheel and base trajectory planning, locomotion planning for high dimensional wheeled-legged robots becomes more tractable, can be solved in real-time on-board in a model predictive control fashion, and becomes robust against unpredicted disturbances. The reference motions are tracked by a hierarchical whole-body controller that sends torque commands to the robot. Our approach is verified on a quadrupedal robot that is fully torque-controlled, including the non-steerable wheels attached to its legs. The robot performs hybrid locomotion with different gait sequences on flat and rough terrain. In addition, we validated the robotic platform at the Defense Advanced Research Projects Agency (DARPA) Subterranean Challenge, where the robot rapidly maps, navigates, and explores dynamic underground environments. 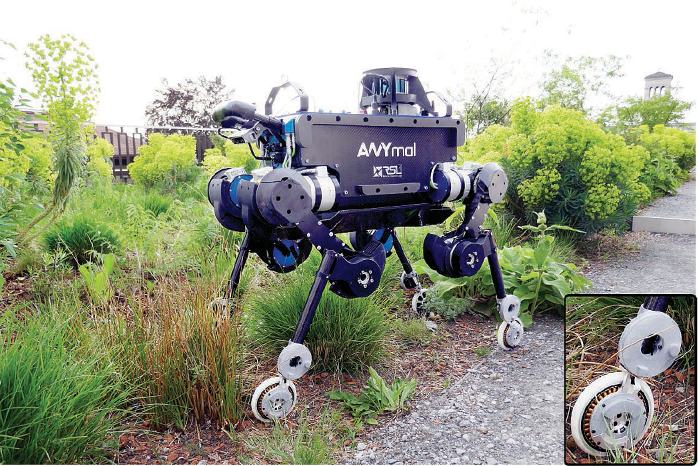 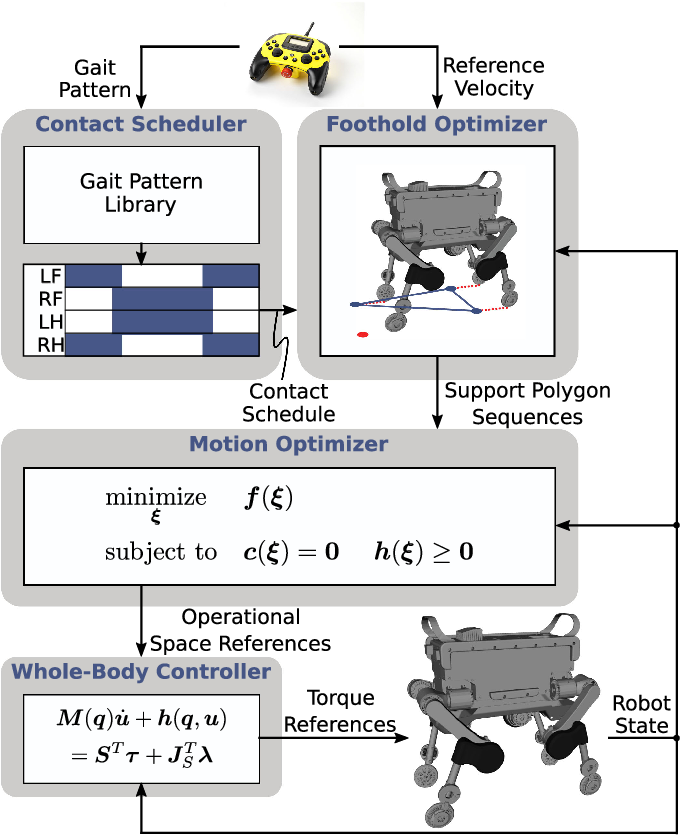 We show dynamic locomotion strategies for wheeled quadrupedal robots, which combine the advantages of both walking and driving. The developed optimization framework tightly integrates the additional degrees of freedom introduced by the wheels. Our approach relies on a zero-moment point based motion optimization which continuously updates reference trajectories. The reference motions are tracked by a hierarchical whole-body controller which computes optimal generalized accelerations and contact forces by solving a sequence of prioritized tasks including the nonholonomic rolling constraints. Our approach has been tested on ANYmal, a quadrupedal robot that is fully torque-controlled including the non-steerable wheels attached to its legs. We conducted experiments on flat and inclined terrains as well as over steps, whereby we show that integrating the wheels into the motion control and planning framework results in intuitive motion trajectories, which enable more robust and dynamic locomotion compared to other wheeled-legged robots. Moreover, with a speed of 4 m/s and a reduction of the cost of transport by 83 % we prove the superiority of wheeled-legged robots compared to their legged counterparts.

A Primer on the Differential Calculus of 3D Orientations 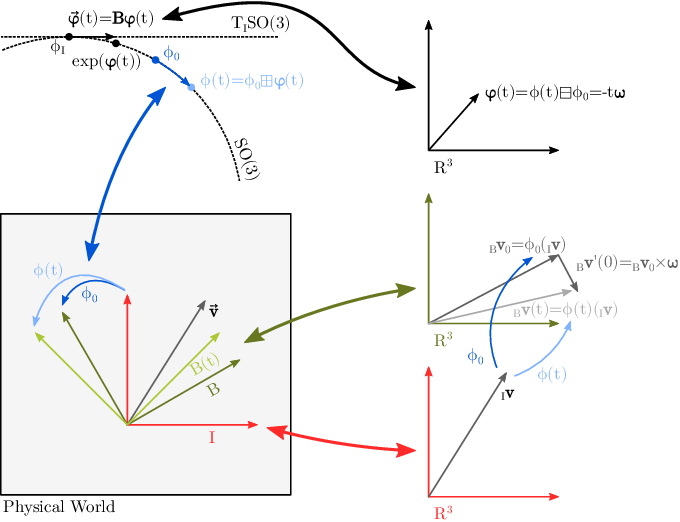 The proper handling of 3D orientations is a central element in many optimization problems in engineering. Unfortunately many researchers and engineers struggle with the formulation of such problems and often fall back to suboptimal solutions. The existence of many different conventions further complicates this issue, especially when interfacing multiple differing implementations. This document discusses an alternative approach which makes use of a more abstract notion of 3D orientations. The relative orientation between two coordinate systems is primarily identified by the coordinate mapping it induces. This is combined with the standard exponential map in order to introduce representation-independent and minimal differentials, which are very convenient in optimization based methods.