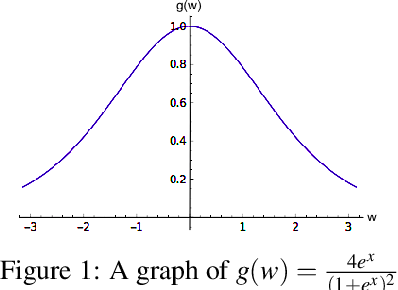 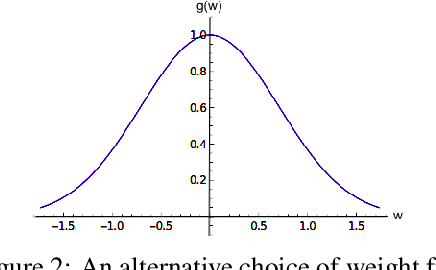 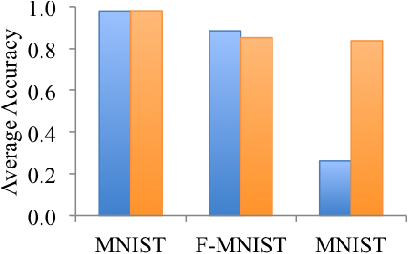 In recent years, deep neural networks have found success in replicating human-level cognitive skills, yet they suffer from several major obstacles. One significant limitation is the inability to learn new tasks without forgetting previously learned tasks, a shortcoming known as catastrophic forgetting. In this research, we propose a simple method to overcome catastrophic forgetting and enable continual learning in neural networks. We draw inspiration from principles in neurology and physics to develop the concept of weight friction. Weight friction operates by a modification to the update rule in the gradient descent optimization method. It converges at a rate comparable to that of the stochastic gradient descent algorithm and can operate over multiple task domains. It performs comparably to current methods while offering improvements in computation and memory efficiency. 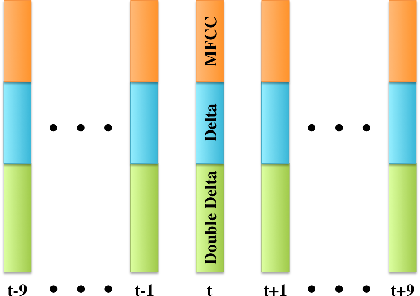 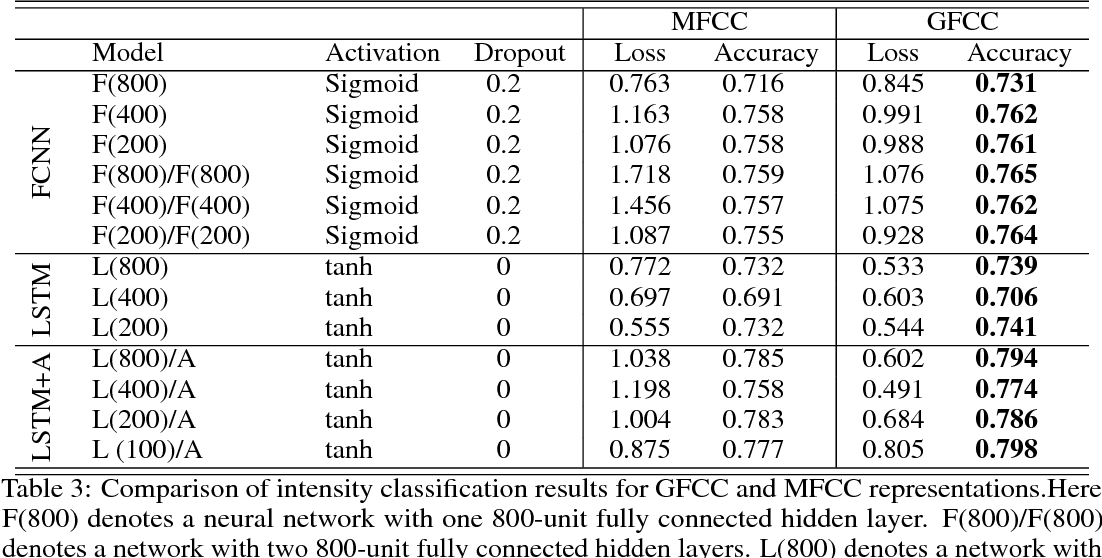 Current approaches to speech emotion recognition focus on speech features that can capture the emotional content of a speech signal. Mel Frequency Cepstral Coefficients (MFCCs) are one of the most commonly used representations for audio speech recognition and classification. This paper proposes Gammatone Frequency Cepstral Coefficients (GFCCs) as a potentially better representation of speech signals for emotion recognition. The effectiveness of MFCC and GFCC representations are compared and evaluated over emotion and intensity classification tasks with fully connected and recurrent neural network architectures. The results provide evidence that GFCCs outperform MFCCs in speech emotion recognition. 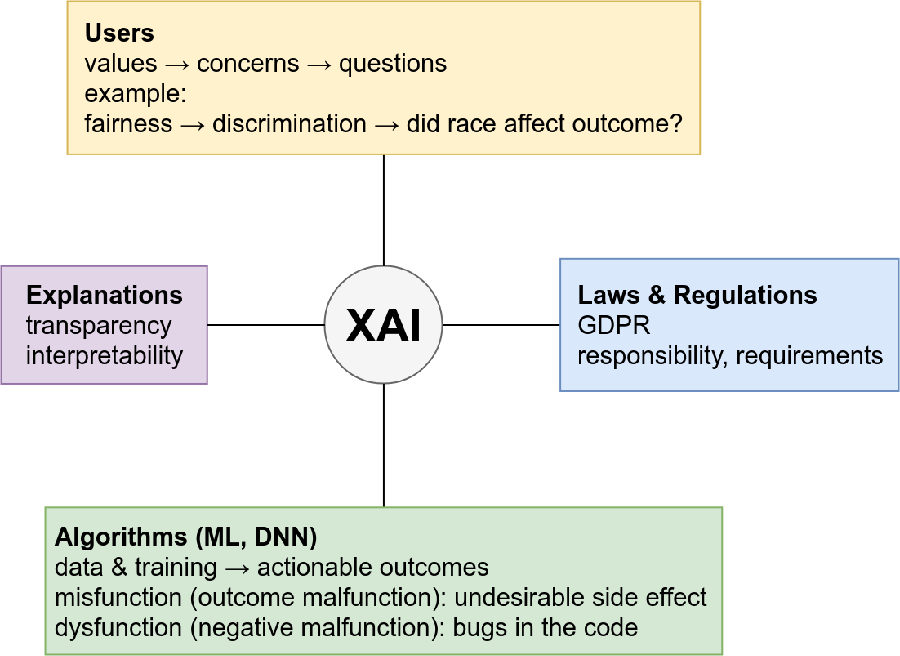 Issues regarding explainable AI involve four components: users, laws & regulations, explanations and algorithms. Together these components provide a context in which explanation methods can be evaluated regarding their adequacy. The goal of this chapter is to bridge the gap between expert users and lay users. Different kinds of users are identified and their concerns revealed, relevant statements from the General Data Protection Regulation are analyzed in the context of Deep Neural Networks (DNNs), a taxonomy for the classification of existing explanation methods is introduced, and finally, the various classes of explanation methods are analyzed to verify if user concerns are justified. Overall, it is clear that (visual) explanations can be given about various aspects of the influence of the input on the output. However, it is noted that explanation methods or interfaces for lay users are missing and we speculate which criteria these methods / interfaces should satisfy. Finally it is noted that two important concerns are difficult to address with explanation methods: the concern about bias in datasets that leads to biased DNNs, as well as the suspicion about unfair outcomes.


* 14 pages, 1 figure, This article will appear as a chapter in Explainable and Interpretable Models in Computer Vision and Machine Learning Springer series on Challenges in Machine Learning

We discuss the development of novel deep learning algorithms to enable real-time regression analysis for time series data. We showcase the application of this new method with a timely case study, and then discuss the applicability of this approach to tackle similar challenges across science domains. 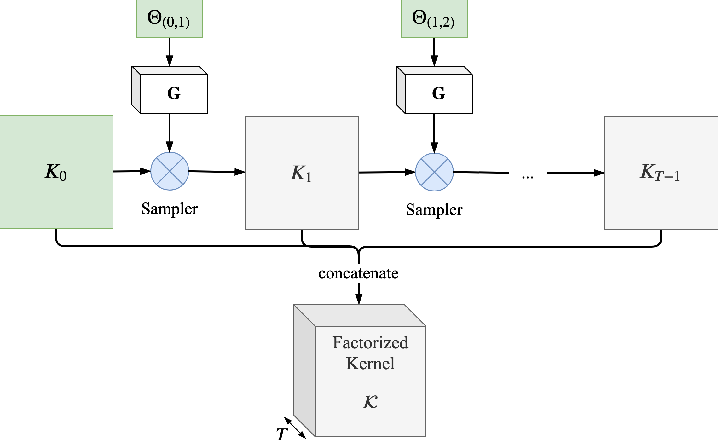 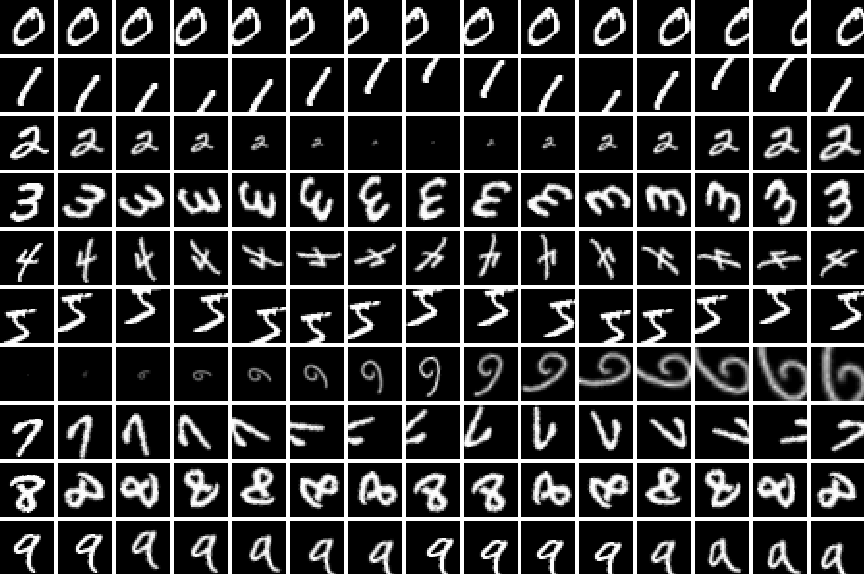 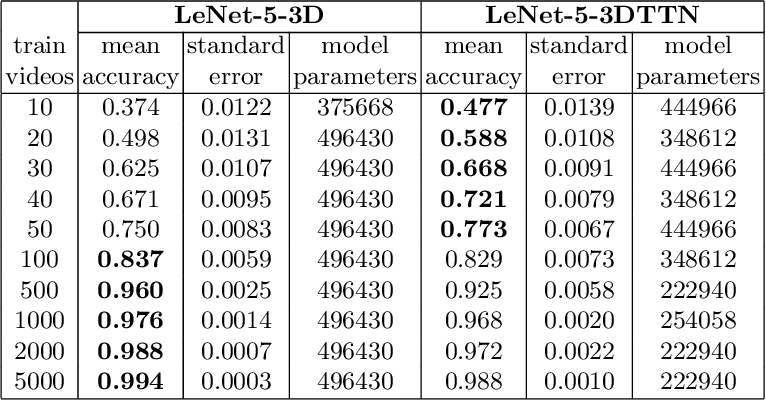 3D convolutional neural networks are difficult to train because they are parameter-expensive and data-hungry. To solve these problems we propose a simple technique for learning 3D convolutional kernels efficiently requiring less training data. We achieve this by factorizing the 3D kernel along the temporal dimension, reducing the number of parameters and making training from data more efficient. Additionally we introduce a novel dataset called Video-MNIST to demonstrate the performance of our method. Our method significantly outperforms the conventional 3D convolution in the low data regime (1 to 5 videos per class). Finally, our model achieves competitive results in the high data regime (>10 videos per class) using up to 45% fewer parameters. 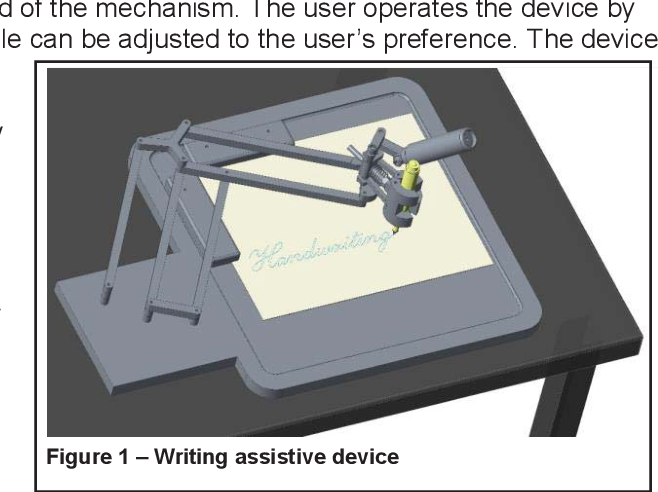 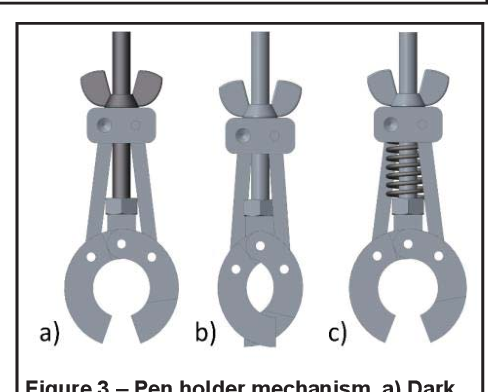 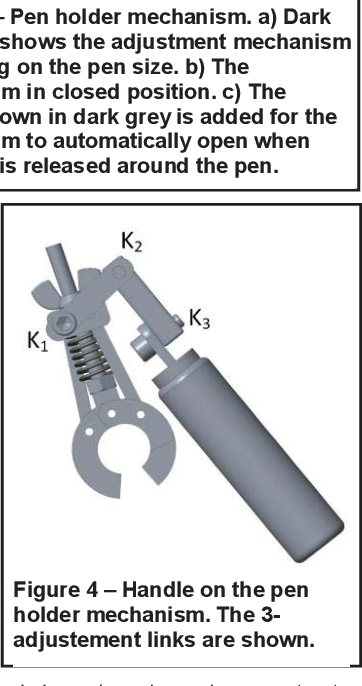 This paper presents the development of a new passive assistive handwriting device, which aims to stabilize the motion of people living with movement disorders. Many people living with conditions such as cerebral palsy, stroke, muscular dystrophy or dystonia experience upper limbs impairments (muscle spasticity, unselective motor control, muscle weakness or tremors) and are unable to write or draw on their own. The proposed device is designed to be fixed on a table. A pen is attached to the device using a pen holder, which maintains the pen in a fixed orientation. The user interacts with the device using a handle while mechanical dampers and inertia contribute to the stabilization of the user's movements. The overall mechanical design of the device is first presented, followed by the design of the pen holder mechanism. 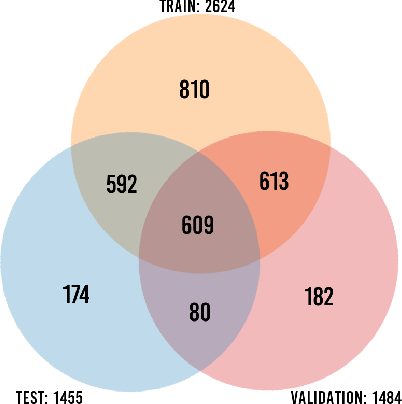 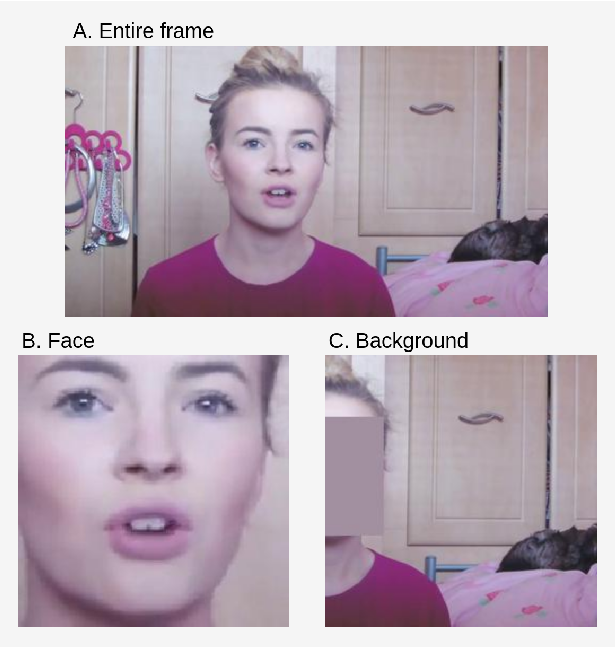 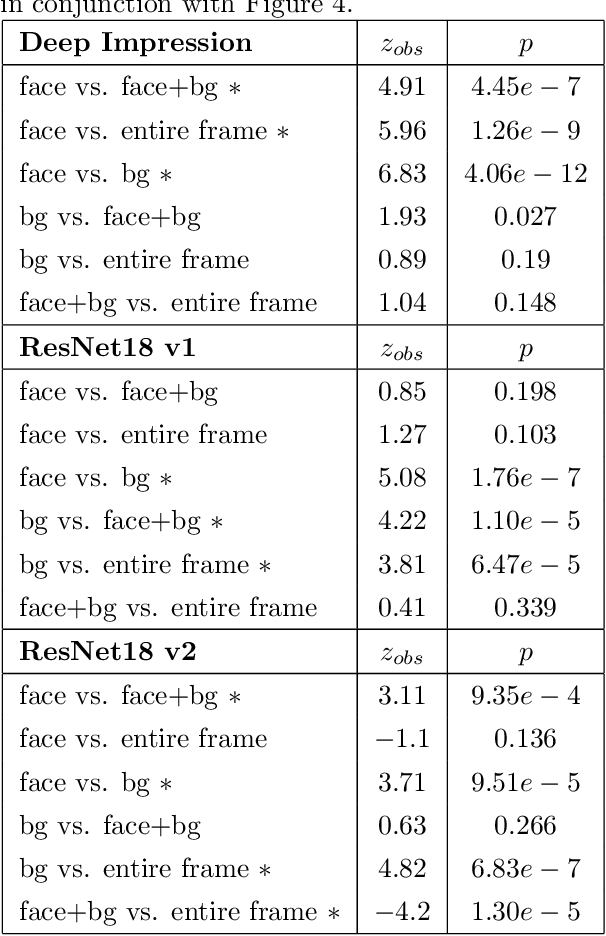 Perceived personality traits attributed to an individual do not have to correspond to their actual personality traits and may be determined in part by the context in which one encounters a person. These apparent traits determine, to a large extent, how other people will behave towards them. Deep neural networks are increasingly being used to perform automated personality attribution (e.g., job interviews). It is important that we understand the driving factors behind the predictions, in humans and in deep neural networks. This paper explicitly studies the effect of the image background on apparent personality prediction while addressing two important confounds present in existing literature; overlapping data splits and including facial information in the background. Surprisingly, we found no evidence that background information improves model predictions for apparent personality traits. In fact, when background is explicitly added to the input, a decrease in performance was measured across all models. 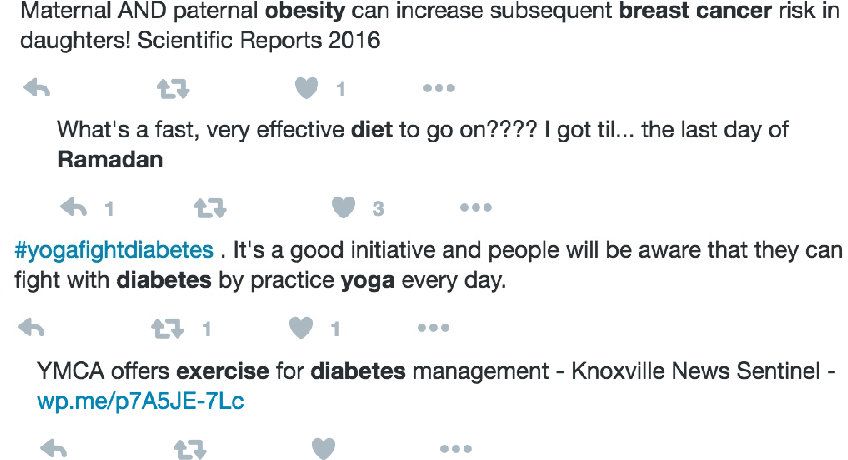 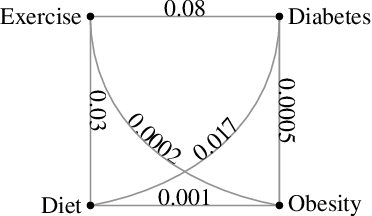 Social media provide a platform for users to express their opinions and share information. Understanding public health opinions on social media, such as Twitter, offers a unique approach to characterizing common health issues such as diabetes, diet, exercise, and obesity (DDEO), however, collecting and analyzing a large scale conversational public health data set is a challenging research task. The goal of this research is to analyze the characteristics of the general public's opinions in regard to diabetes, diet, exercise and obesity (DDEO) as expressed on Twitter. A multi-component semantic and linguistic framework was developed to collect Twitter data, discover topics of interest about DDEO, and analyze the topics. From the extracted 4.5 million tweets, 8% of tweets discussed diabetes, 23.7% diet, 16.6% exercise, and 51.7% obesity. The strongest correlation among the topics was determined between exercise and obesity. Other notable correlations were: diabetes and obesity, and diet and obesity DDEO terms were also identified as subtopics of each of the DDEO topics. The frequent subtopics discussed along with Diabetes, excluding the DDEO terms themselves, were blood pressure, heart attack, yoga, and Alzheimer. The non-DDEO subtopics for Diet included vegetarian, pregnancy, celebrities, weight loss, religious, and mental health, while subtopics for Exercise included computer games, brain, fitness, and daily plan. Non-DDEO subtopics for Obesity included Alzheimer, cancer, and children. With 2.67 billion social media users in 2016, publicly available data such as Twitter posts can be utilized to support clinical providers, public health experts, and social scientists in better understanding common public opinions in regard to diabetes, diet, exercise, and obesity. 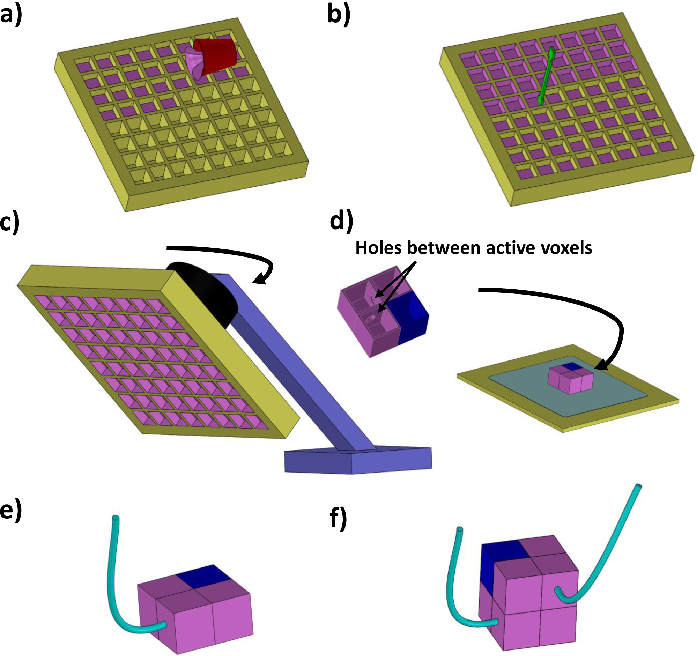 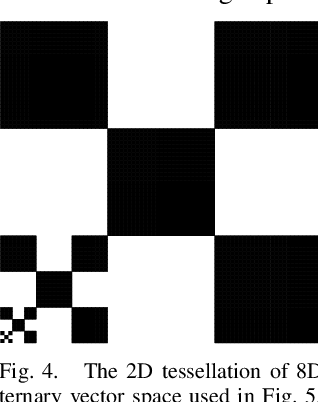 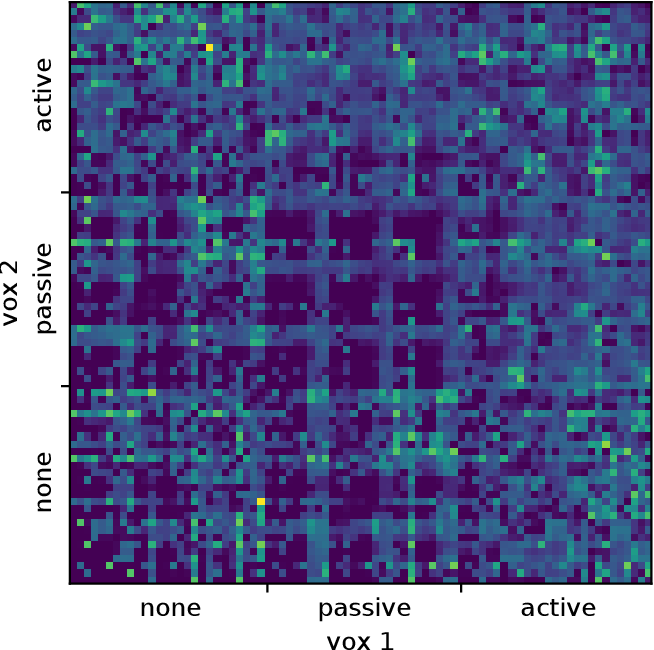 The manual design of soft robots and their controllers is notoriously challenging, but it could be augmented---or, in some cases, entirely replaced---by automated design tools. Machine learning algorithms can automatically propose, test, and refine designs in simulation, and the most promising ones can then be manufactured in reality (sim2real). However, it is currently not known how to guarantee that behavior generated in simulation can be preserved when deployed in reality. Although many previous studies have devised training protocols that facilitate sim2real transfer of control polices, little to no work has investigated the simulation-reality gap as a function of morphology. This is due in part to an overall lack of tools capable of systematically designing and rapidly manufacturing robots. Here we introduce a low cost, open source, and modular soft robot design and construction kit, and use it to simulate, fabricate, and measure the simulation-reality gap of minimally complex yet soft, locomoting machines. We prove the scalability of this approach by transferring an order of magnitude more robot designs from simulation to reality than any other method. The kit and its instructions can be found here: https://github.com/skriegman/sim2real4designs 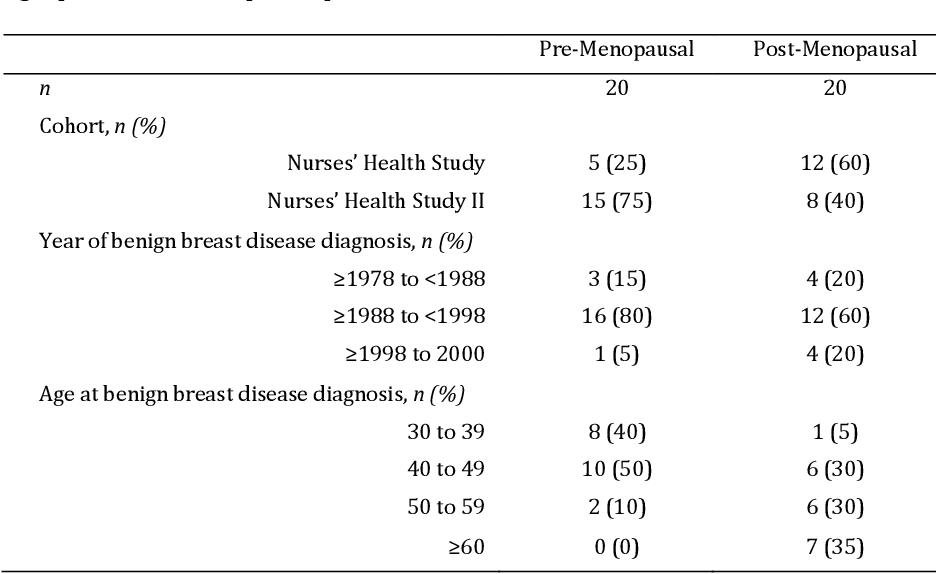 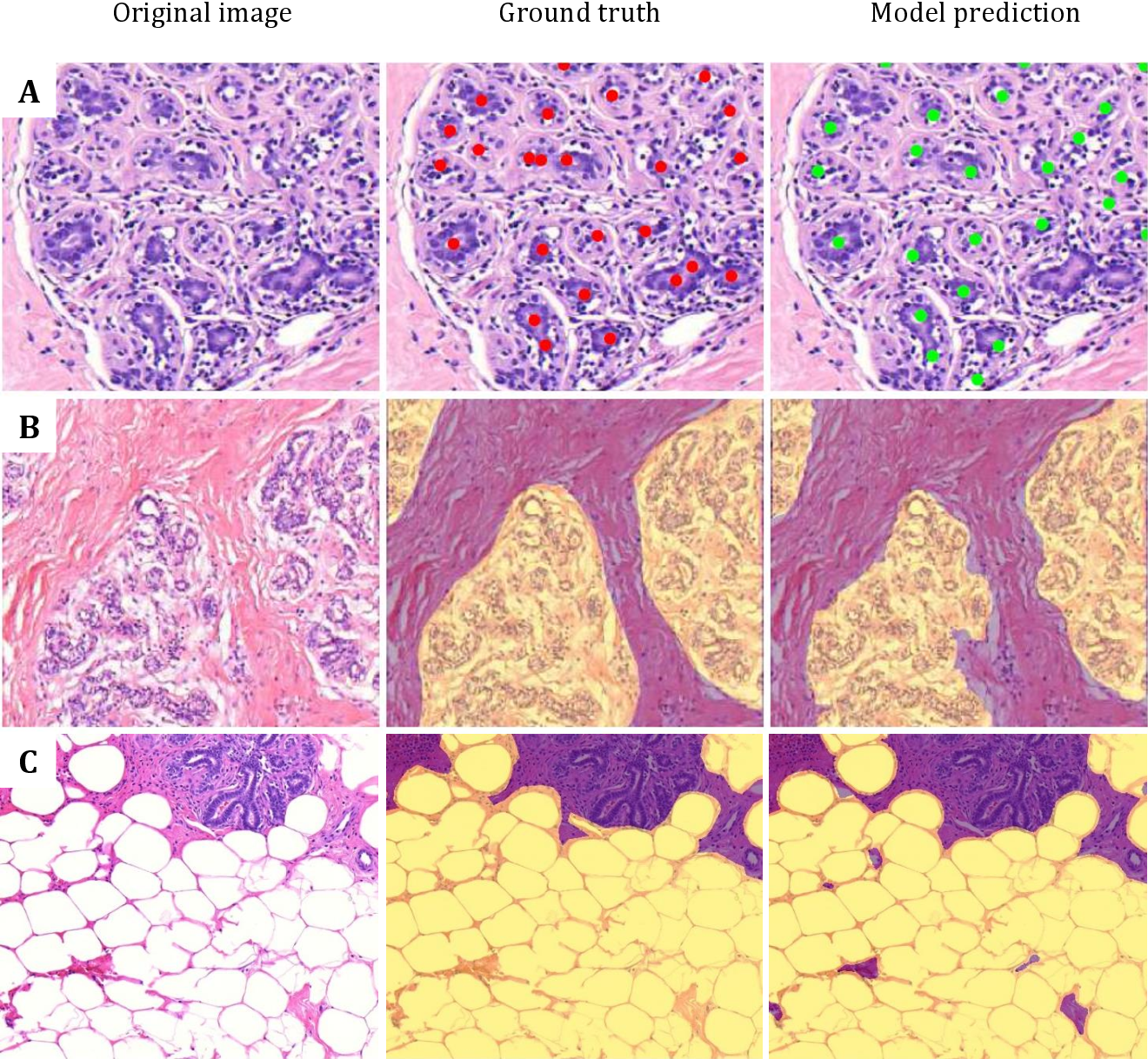 Terminal ductal lobular unit (TDLU) involution is the regression of milk-producing structures in the breast. Women with less TDLU involution are more likely to develop breast cancer. A major bottleneck in studying TDLU involution in large cohort studies is the need for labor-intensive manual assessment of TDLUs. We developed a computational pathology solution to automatically capture TDLU involution measures. Whole slide images (WSIs) of benign breast biopsies were obtained from the Nurses' Health Study (NHS). A first set of 92 WSIs was annotated for TDLUs, acini and adipose tissue to train deep convolutional neural network (CNN) models for detection of acini, and segmentation of TDLUs and adipose tissue. These networks were integrated into a single computational method to capture TDLU involution measures including number of TDLUs per tissue area, median TDLU span and median number of acini per TDLU. We validated our method on 40 additional WSIs by comparing with manually acquired measures. Our CNN models detected acini with an F1 score of 0.73$\pm$0.09, and segmented TDLUs and adipose tissue with Dice scores of 0.86$\pm$0.11 and 0.86$\pm$0.04, respectively. The inter-observer ICC scores for manual assessments on 40 WSIs of number of TDLUs per tissue area, median TDLU span, and median acini count per TDLU were 0.71, 95% CI [0.51, 0.83], 0.81, 95% CI [0.67, 0.90], and 0.73, 95% CI [0.54, 0.85], respectively. Intra-observer reliability was evaluated on 10/40 WSIs with ICC scores of >0.8. Inter-observer ICC scores between automated results and the mean of the two observers were: 0.80, 95% CI [0.63, 0.90] for number of TDLUs per tissue area, 0.57, 95% CI [0.19, 0.77] for median TDLU span, and 0.80, 95% CI [0.62, 0.89] for median acini count per TDLU. TDLU involution measures evaluated by manual and automated assessment were inversely associated with age and menopausal status. 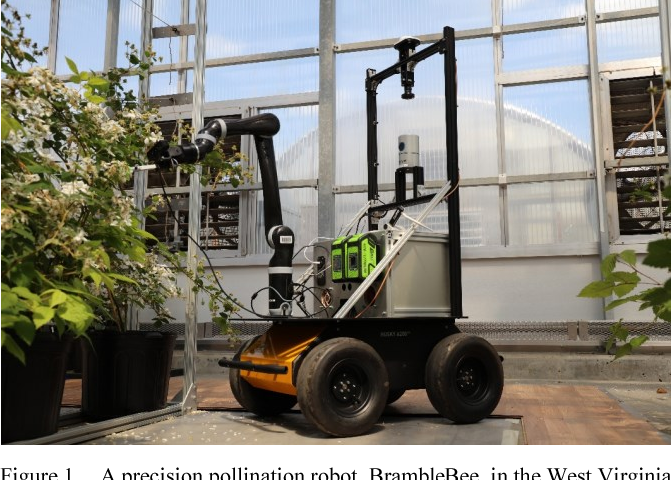 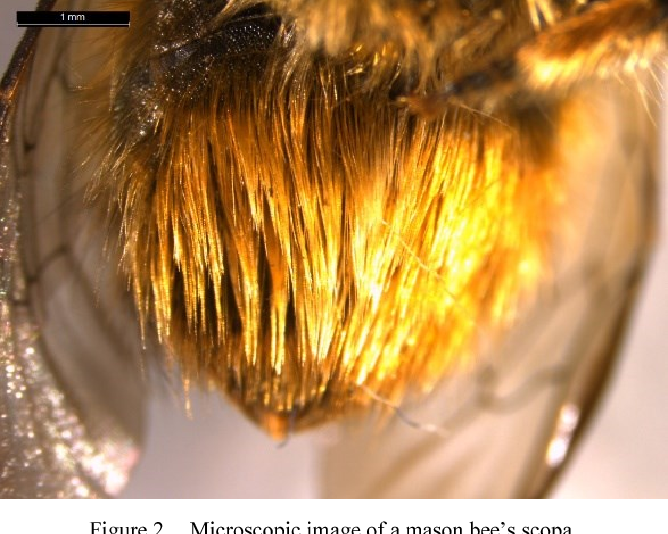 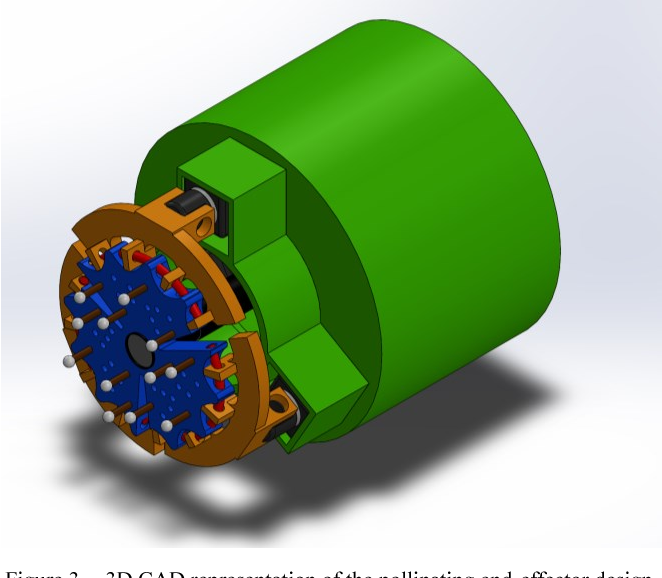 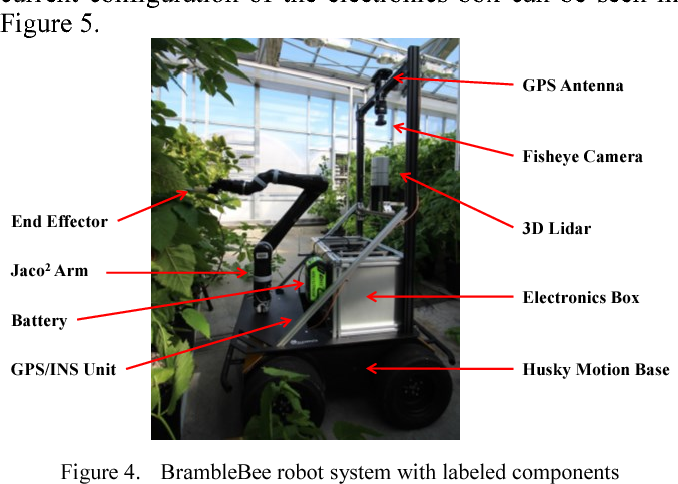 Precision robotic pollination systems can not only fill the gap of declining natural pollinators, but can also surpass them in efficiency and uniformity, helping to feed the fast-growing human population on Earth. This paper presents the design and ongoing development of an autonomous robot named "BrambleBee", which aims at pollinating bramble plants in a greenhouse environment. Partially inspired by the ecology and behavior of bees, BrambleBee employs state-of-the-art localization and mapping, visual perception, path planning, motion control, and manipulation techniques to create an efficient and robust autonomous pollination system.

Deep Learning for Multi-Messenger Astrophysics: A Gateway for Discovery in the Big Data Era


* 15 pages, no figures. White paper based on the "Deep Learning for Multi-Messenger Astrophysics: Real-time Discovery at Scale" workshop, hosted at NCSA, October 17-19, 2018 http://www.ncsa.illinois.edu/Conferences/DeepLearningLSST/ 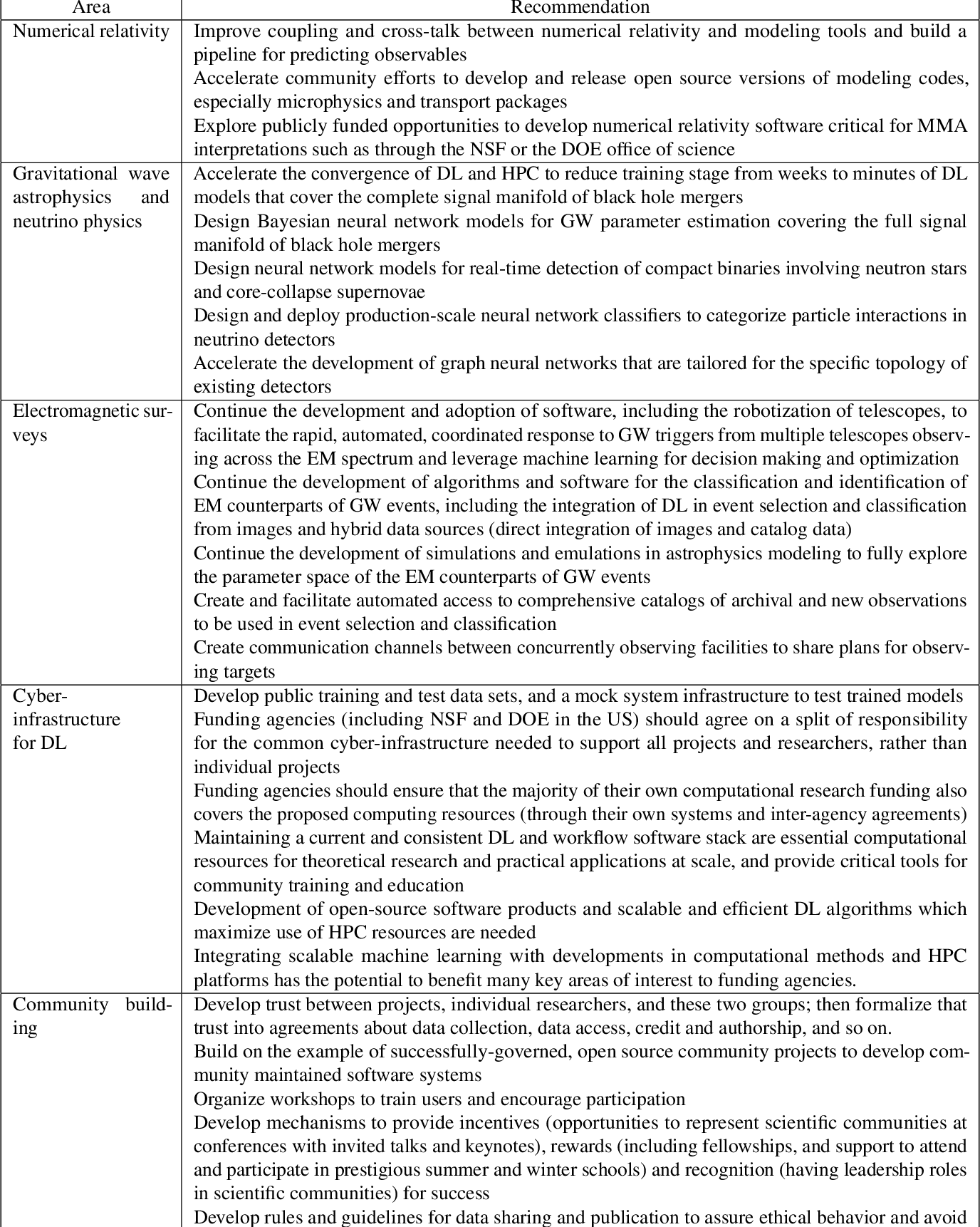 Multi-messenger astrophysics is a fast-growing, interdisciplinary field that combines data, which vary in volume and speed of data processing, from many different instruments that probe the Universe using different cosmic messengers: electromagnetic waves, cosmic rays, gravitational waves and neutrinos. In this Expert Recommendation, we review the key challenges of real-time observations of gravitational wave sources and their electromagnetic and astroparticle counterparts, and make a number of recommendations to maximize their potential for scientific discovery. These recommendations refer to the design of scalable and computationally efficient machine learning algorithms; the cyber-infrastructure to numerically simulate astrophysical sources, and to process and interpret multi-messenger astrophysics data; the management of gravitational wave detections to trigger real-time alerts for electromagnetic and astroparticle follow-ups; a vision to harness future developments of machine learning and cyber-infrastructure resources to cope with the big-data requirements; and the need to build a community of experts to realize the goals of multi-messenger astrophysics.