Confiding in and Listening to Virtual Agents: The Effect of Personality 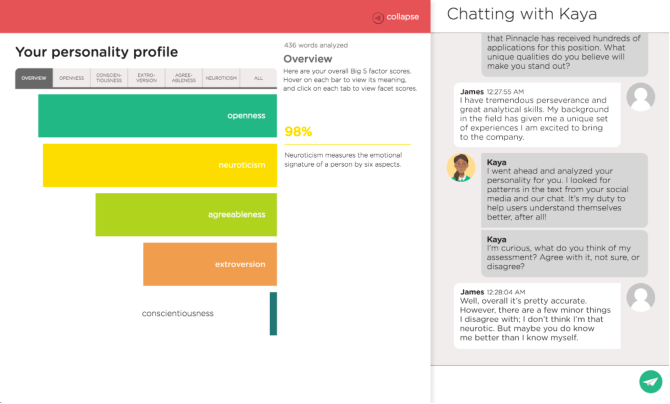 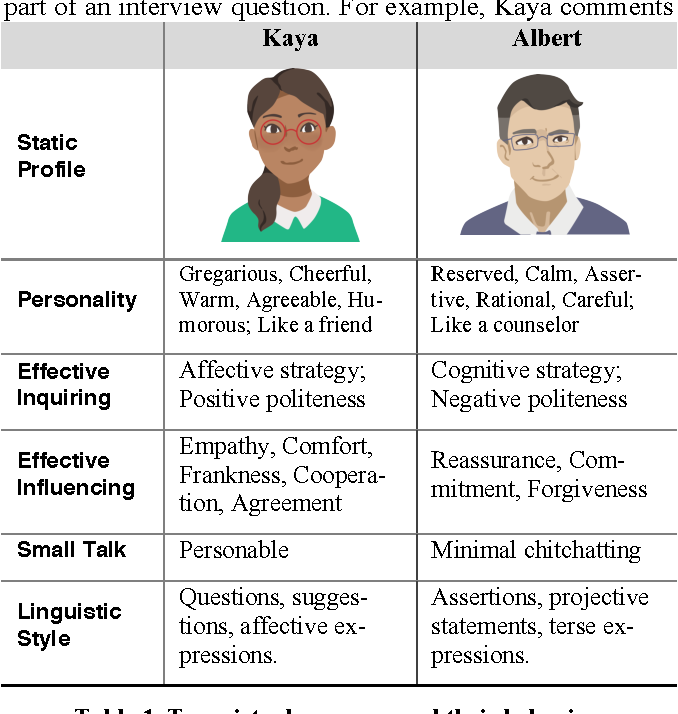 Tell Me About Yourself: Using an AI-Powered Chatbot to Conduct Conversational Surveys 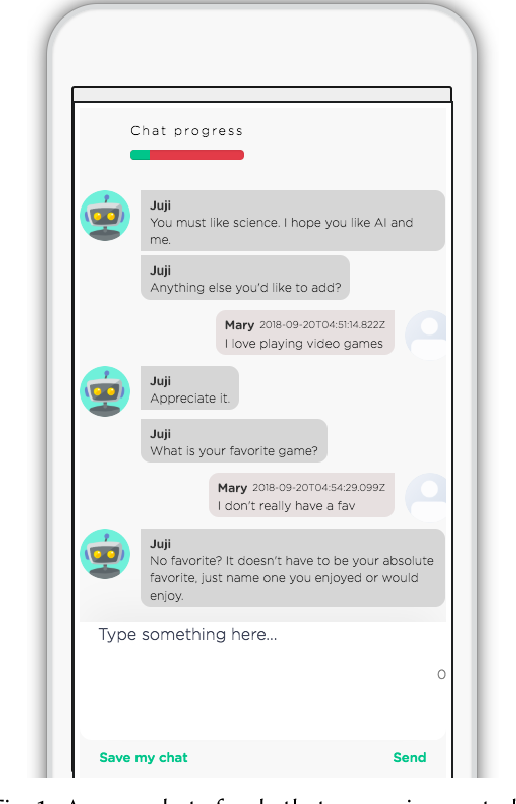 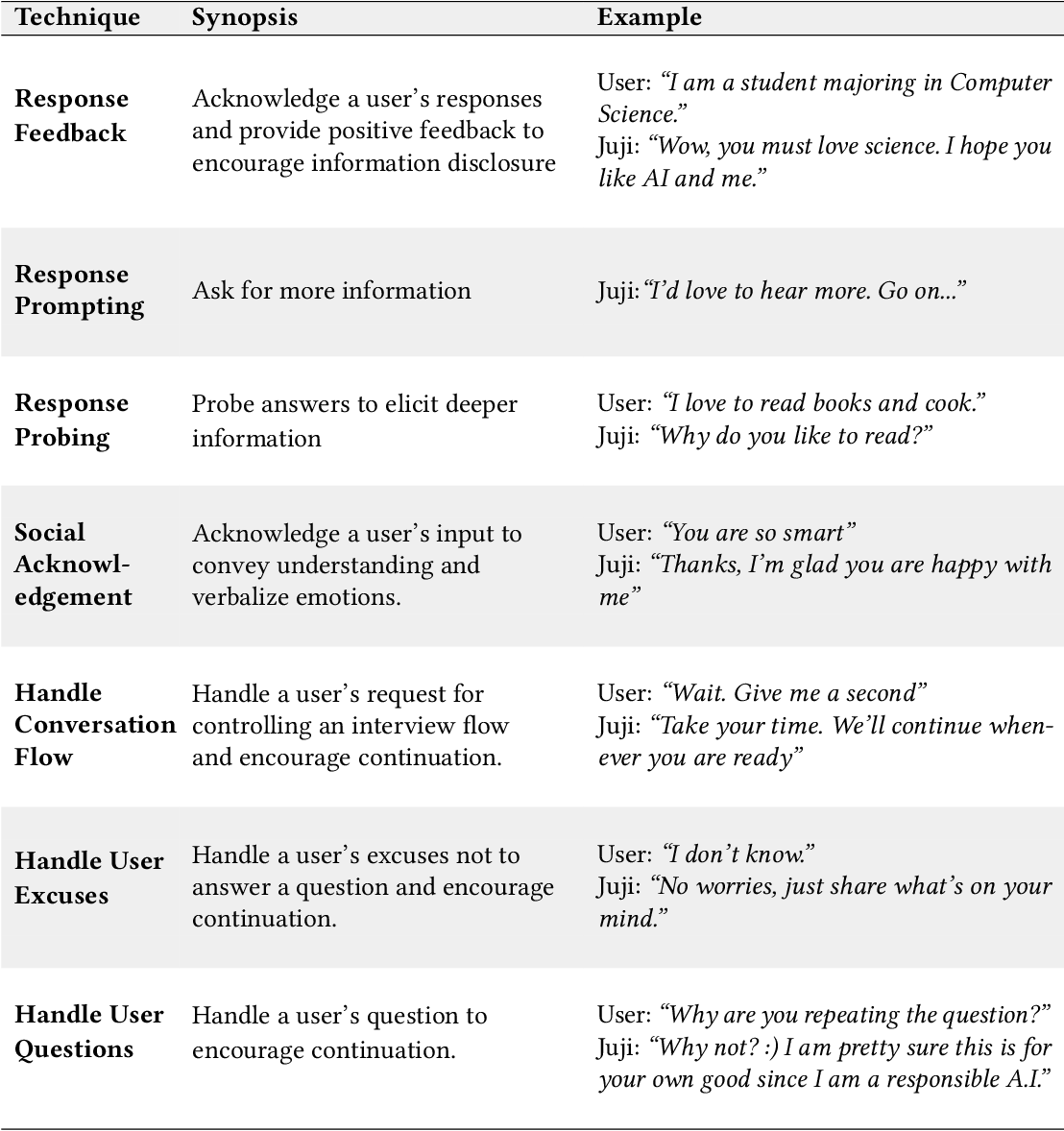 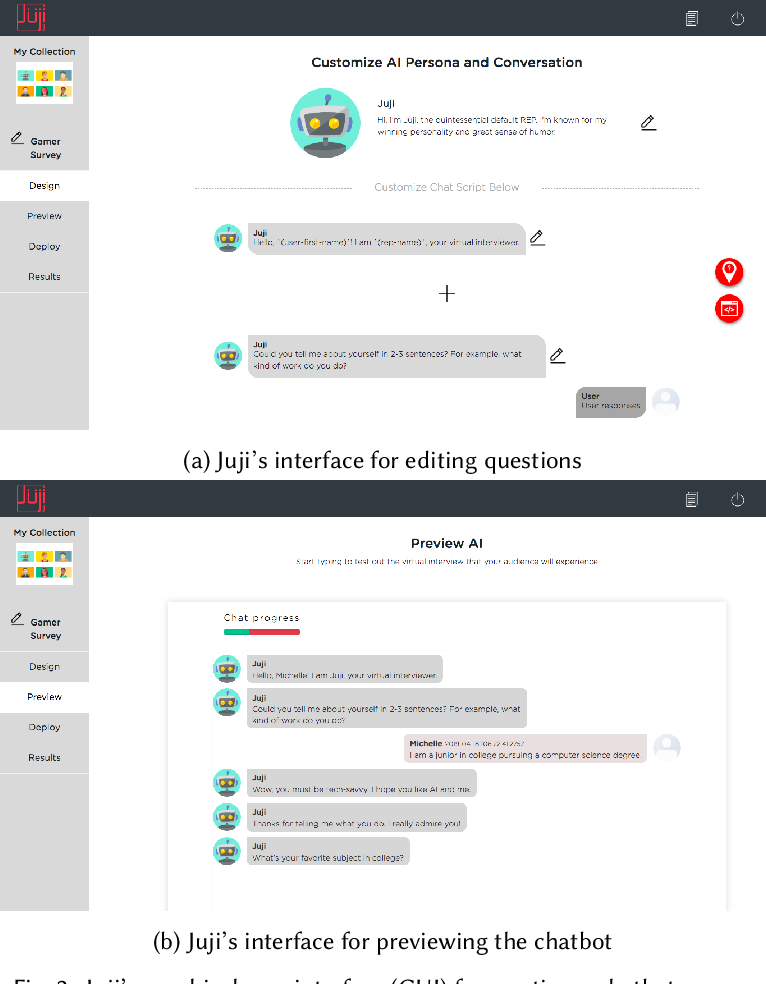 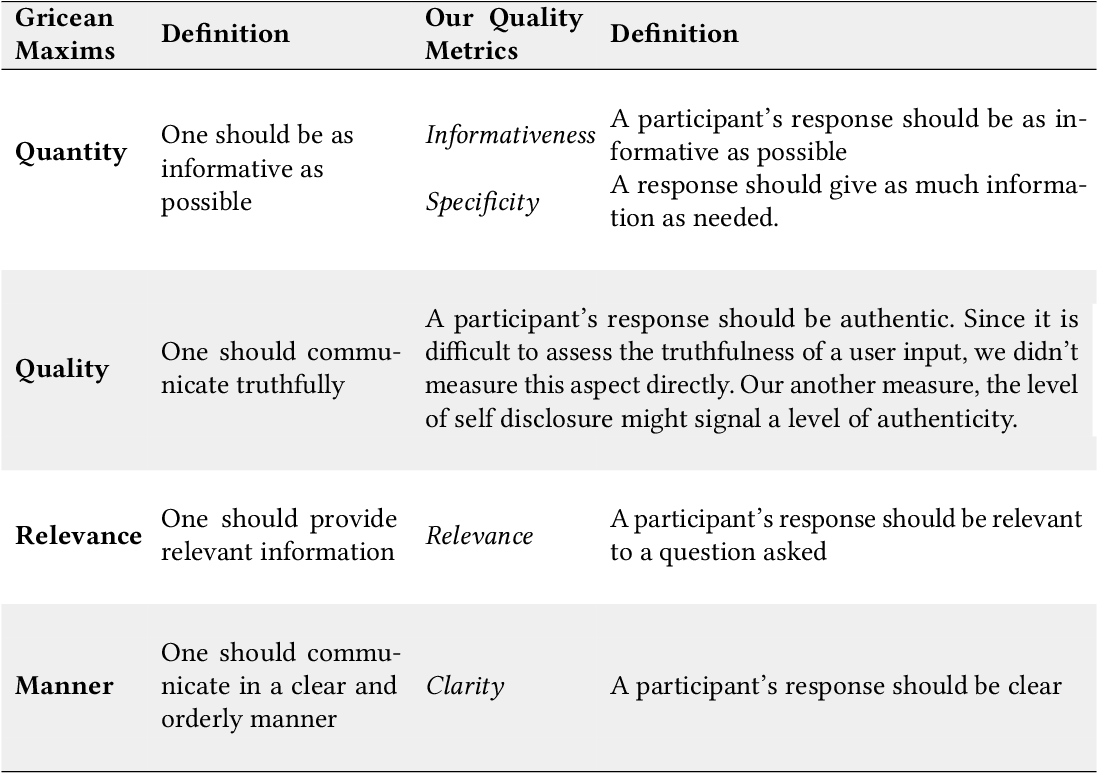 The rise of increasingly more powerful chatbots offers a new way to collect information through conversational surveys, where a chatbot asks open-ended questions, interprets a user's free-text responses, and probes answers when needed. To investigate the effectiveness and limitations of such a chatbot in conducting surveys, we conducted a field study involving about 600 participants. In this study, half of the participants took a typical online survey on Qualtrics and the other half interacted with an AI-powered chatbot to complete a conversational survey. Our detailed analysis of over 5200 free-text responses revealed that the chatbot drove a significantly higher level of participant engagement and elicited significantly better quality responses in terms of relevance, depth, and readability. Based on our results, we discuss design implications for creating AI-powered chatbots to conduct effective surveys and beyond. 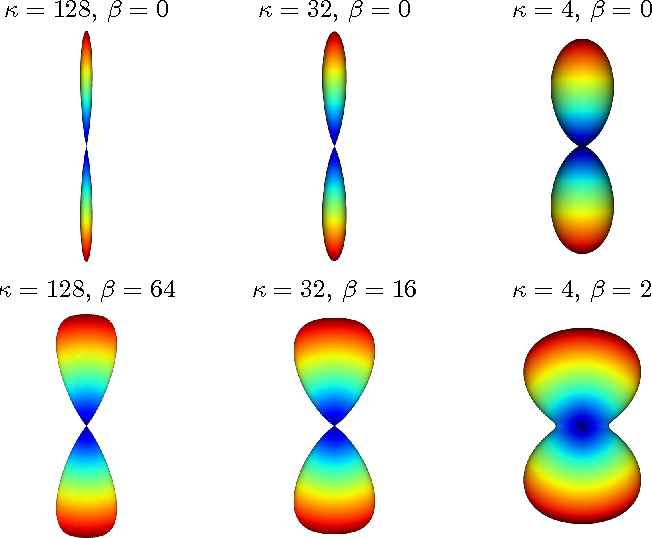 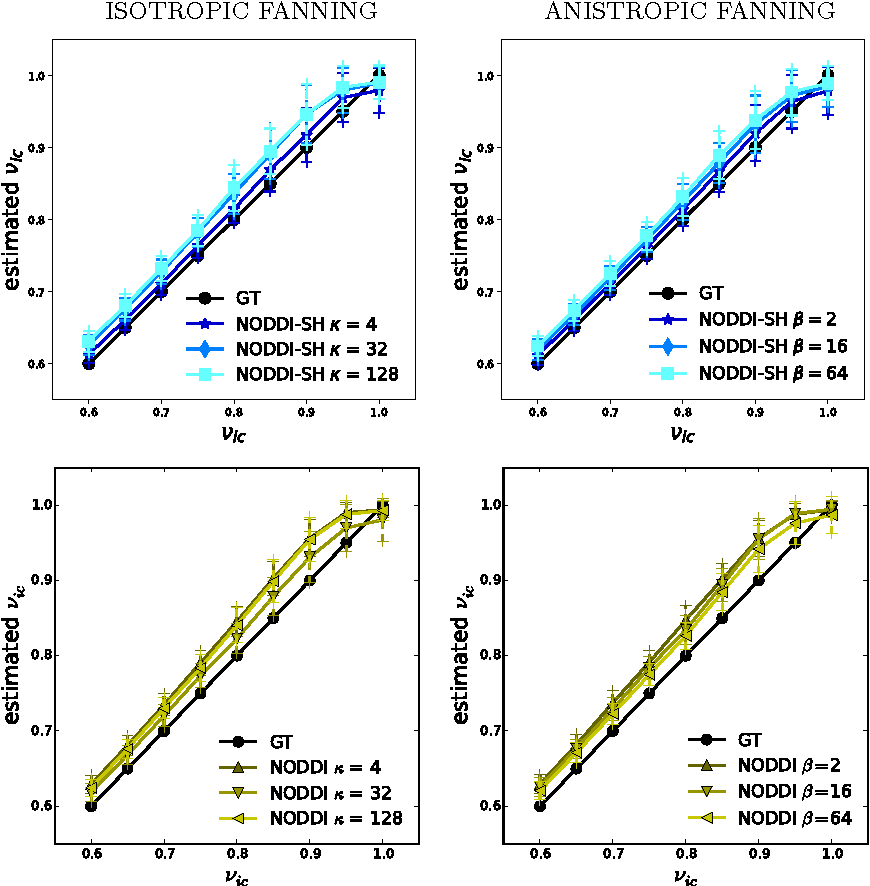 Diffusion Magnetic Resonance Imaging (DMRI) is the only non-invasive imaging technique which is able to detect the principal directions of water diffusion as well as neurites density in the human brain. Exploiting the ability of Spherical Harmonics (SH) to model spherical functions, we propose a new reconstruction model for DMRI data which is able to estimate both the fiber Orientation Distribution Function (fODF) and the relative volume fractions of the neurites in each voxel, which is robust to multiple fiber crossings. We consider a Neurite Orientation Dispersion and Density Imaging (NODDI) inspired single fiber diffusion signal to be derived from three compartments: intracellular, extracellular, and cerebrospinal fluid. The model, called NODDI-SH, is derived by convolving the single fiber response with the fODF in each voxel. NODDI-SH embeds the calculation of the fODF and the neurite density in a unified mathematical model providing efficient, robust and accurate results. Results were validated on simulated data and tested on \textit{in-vivo} data of human brain, and compared to and Constrained Spherical Deconvolution (CSD) for benchmarking. Results revealed competitive performance in all respects and inherent adaptivity to local microstructure, while sensibly reducing the computational cost. We also investigated NODDI-SH performance when only a limited number of samples are available for the fitting, demonstrating that 60 samples are enough to obtain reliable results. The fast computational time and the low number of signal samples required, make NODDI-SH feasible for clinical application. 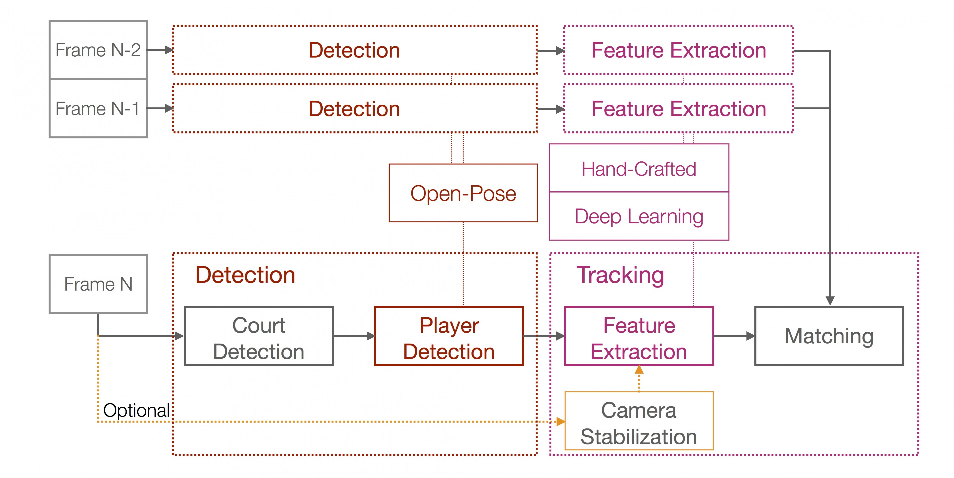 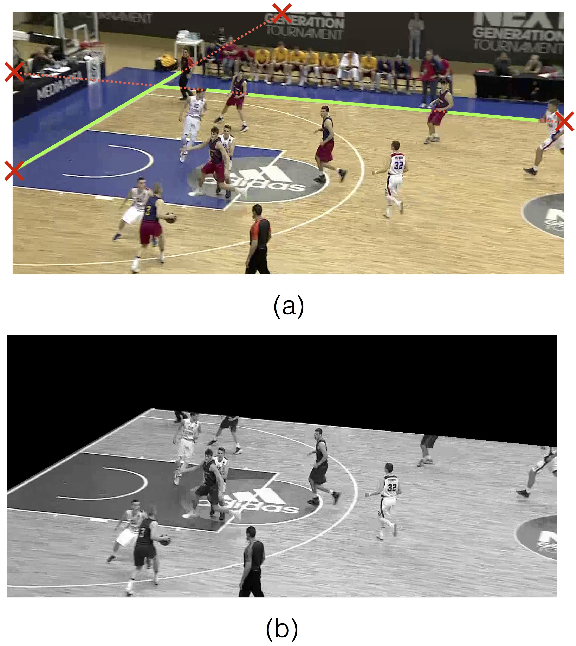 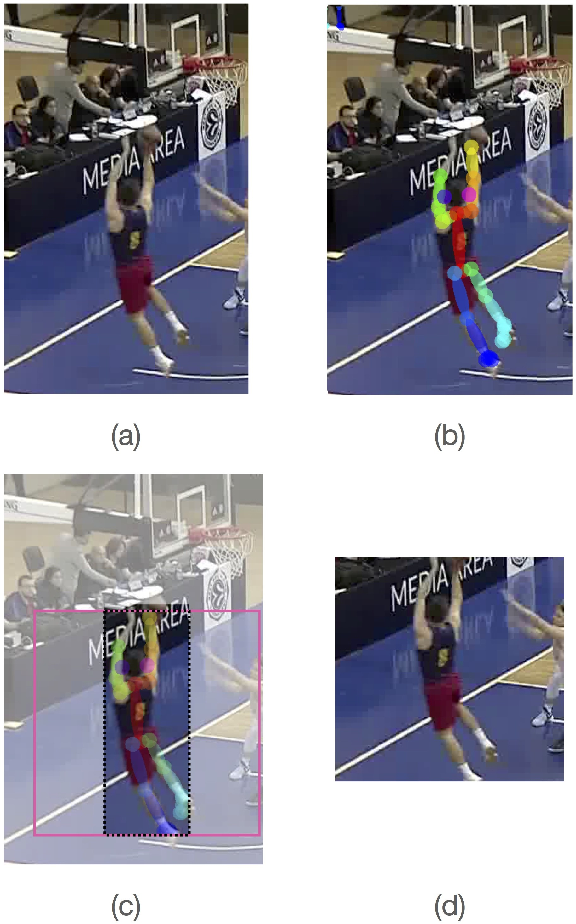 Tracking sports players is a widely challenging scenario, specially in single-feed videos recorded in tight courts, where cluttering and occlusions cannot be avoided. This paper presents an analysis of several geometric and semantic visual features to detect and track basketball players. An ablation study is carried out and then used to remark that a robust tracker can be built with Deep Learning features, without the need of extracting contextual ones, such as proximity or color similarity, nor applying camera stabilization techniques. The presented tracker consists of: (1) a detection step, which uses a pretrained deep learning model to estimate the players pose, followed by (2) a tracking step, which leverages pose and semantic information from the output of a convolutional layer in a VGG network. Its performance is analyzed in terms of MOTA over a basketball dataset with more than 10k instances.

Deep learning has brought an unprecedented progress in computer vision and significant advances have been made in predicting subjective properties inherent to visual data (e.g., memorability, aesthetic quality, evoked emotions, etc.). Recently, some research works have even proposed deep learning approaches to modify images such as to appropriately alter these properties. Following this research line, this paper introduces a novel deep learning framework for synthesizing images in order to enhance a predefined perceptual attribute. Our approach takes as input a natural image and exploits recent models for deep style transfer and generative adversarial networks to change its style in order to modify a specific high-level attribute. Differently from previous works focusing on enhancing a specific property of a visual content, we propose a general framework and demonstrate its effectiveness in two use cases, i.e. increasing image memorability and generating scary pictures. We evaluate the proposed approach on publicly available benchmarks, demonstrating its advantages over state of the art methods. 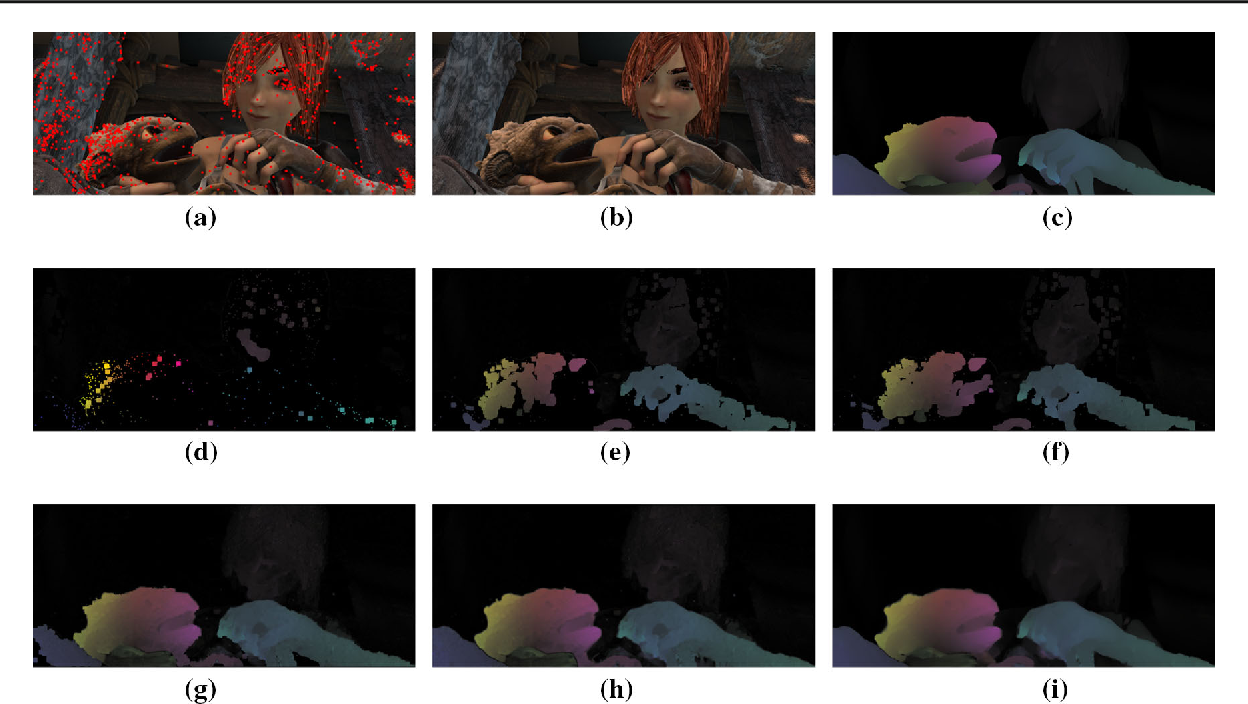 We propose a large displacement optical flow method that introduces a new strategy to compute a good local minimum of any optical flow energy functional. The method requires a given set of discrete matches, which can be extremely sparse, and an energy functional which locally guides the interpolation from those matches. In particular, the matches are used to guide a structured coordinate-descent of the energy functional around these keypoints. It results in a two-step minimization method at the finest scale which is very robust to the inevitable outliers of the sparse matcher and able to capture large displacements of small objects. Its benefits over other variational methods that also rely on a set of sparse matches are its robustness against very few matches, high levels of noise and outliers. We validate our proposal using several optical flow variational models. The results consistently outperform the coarse-to-fine approaches and achieve good qualitative and quantitative performance on the standard optical flow benchmarks. 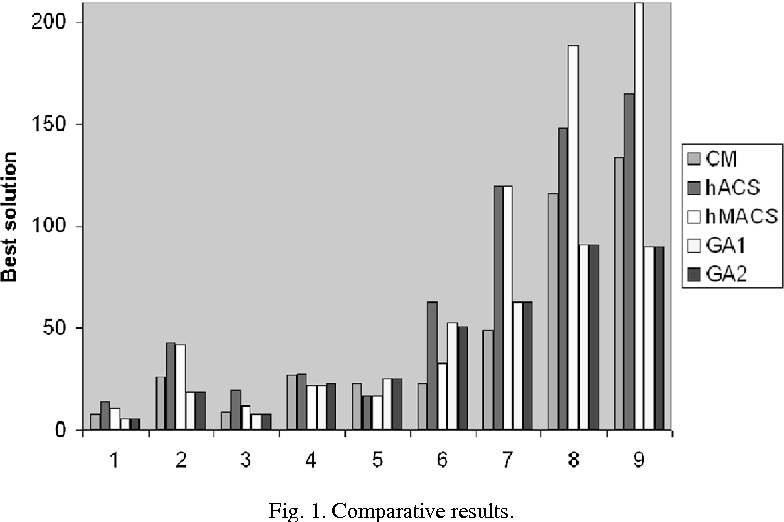 The Matrix Bandwidth Minimization Problem (MBMP) seeks for a simultaneous reordering of the rows and the columns of a square matrix such that the nonzero entries are collected within a band of small width close to the main diagonal. The MBMP is a NP-complete problem, with applications in many scientific domains, linear systems, artificial intelligence, and real-life situations in industry, logistics, information recovery. The complex problems are hard to solve, that is why any attempt to improve their solutions is beneficent. Genetic algorithms and ant-based systems are Soft Computing methods used in this paper in order to solve some MBMP instances. Our approach is based on a learning agent-based model involving a local search procedure. The algorithm is compared with the classical Cuthill-McKee algorithm, and with a hybrid genetic algorithm, using several instances from Matrix Market collection. Computational experiments confirm a good performance of the proposed algorithms for the considered set of MBMP instances. On Soft Computing basis, we also propose a new theoretical Reinforcement Learning model for solving the MBMP problem. 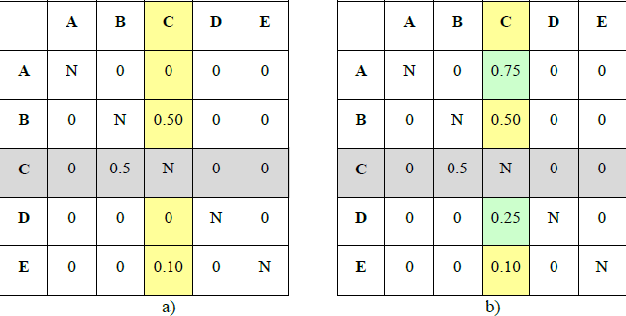 The goal of Machine Learning to automatically learn from data, extract knowledge and to make decisions without any human intervention. Such automatic (aML) approaches show impressive success. Recent results even demonstrate intriguingly that deep learning applied for automatic classification of skin lesions is on par with the performance of dermatologists, yet outperforms the average. As human perception is inherently limited, such approaches can discover patterns, e.g. that two objects are similar, in arbitrarily high-dimensional spaces what no human is able to do. Humans can deal only with limited amounts of data, whilst big data is beneficial for aML; however, in health informatics, we are often confronted with a small number of data sets, where aML suffer of insufficient training samples and many problems are computationally hard. Here, interactive machine learning (iML) may be of help, where a human-in-the-loop contributes to reduce the complexity of NP-hard problems. A further motivation for iML is that standard black-box approaches lack transparency, hence do not foster trust and acceptance of ML among end-users. Rising legal and privacy aspects, e.g. with the new European General Data Protection Regulations, make black-box approaches difficult to use, because they often are not able to explain why a decision has been made. In this paper, we present some experiments to demonstrate the effectiveness of the human-in-the-loop approach, particularly in opening the black-box to a glass-box and thus enabling a human directly to interact with an learning algorithm. We selected the Ant Colony Optimization framework, and applied it on the Traveling Salesman Problem, which is a good example, due to its relevance for health informatics, e.g. for the study of protein folding. From studies of how humans extract so much from so little data, fundamental ML-research also may benefit.

How to Make an Image More Memorable? A Deep Style Transfer Approach

Recent works have shown that it is possible to automatically predict intrinsic image properties like memorability. In this paper, we take a step forward addressing the question: "Can we make an image more memorable?". Methods for automatically increasing image memorability would have an impact in many application fields like education, gaming or advertising. Our work is inspired by the popular editing-by-applying-filters paradigm adopted in photo editing applications, like Instagram and Prisma. In this context, the problem of increasing image memorability maps to that of retrieving "memorabilizing" filters or style "seeds". Still, users generally have to go through most of the available filters before finding the desired solution, thus turning the editing process into a resource and time consuming task. In this work, we show that it is possible to automatically retrieve the best style seeds for a given image, thus remarkably reducing the number of human attempts needed to find a good match. Our approach leverages from recent advances in the field of image synthesis and adopts a deep architecture for generating a memorable picture from a given input image and a style seed. Importantly, to automatically select the best style a novel learning-based solution, also relying on deep models, is proposed. Our experimental evaluation, conducted on publicly available benchmarks, demonstrates the effectiveness of the proposed approach for generating memorable images through automatic style seed selection

A Benchmark for Endoluminal Scene Segmentation of Colonoscopy Images 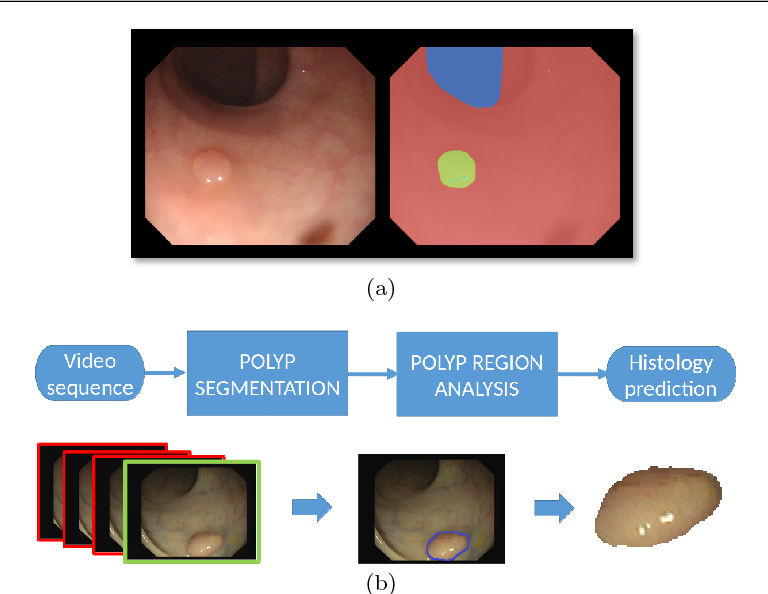 Colorectal cancer (CRC) is the third cause of cancer death worldwide. Currently, the standard approach to reduce CRC-related mortality is to perform regular screening in search for polyps and colonoscopy is the screening tool of choice. The main limitations of this screening procedure are polyp miss-rate and inability to perform visual assessment of polyp malignancy. These drawbacks can be reduced by designing Decision Support Systems (DSS) aiming to help clinicians in the different stages of the procedure by providing endoluminal scene segmentation. Thus, in this paper, we introduce an extended benchmark of colonoscopy image, with the hope of establishing a new strong benchmark for colonoscopy image analysis research. We provide new baselines on this dataset by training standard fully convolutional networks (FCN) for semantic segmentation and significantly outperforming, without any further post-processing, prior results in endoluminal scene segmentation.

Her2 Challenge Contest: A Detailed Assessment of Automated Her2 Scoring Algorithms in Whole Slide Images of Breast Cancer Tissues 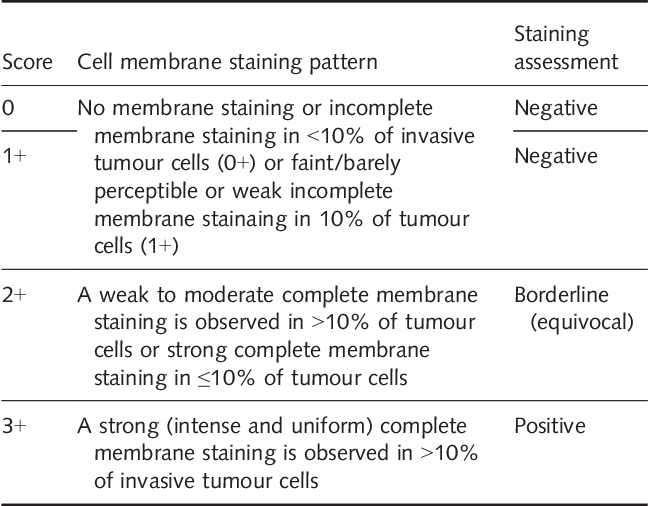 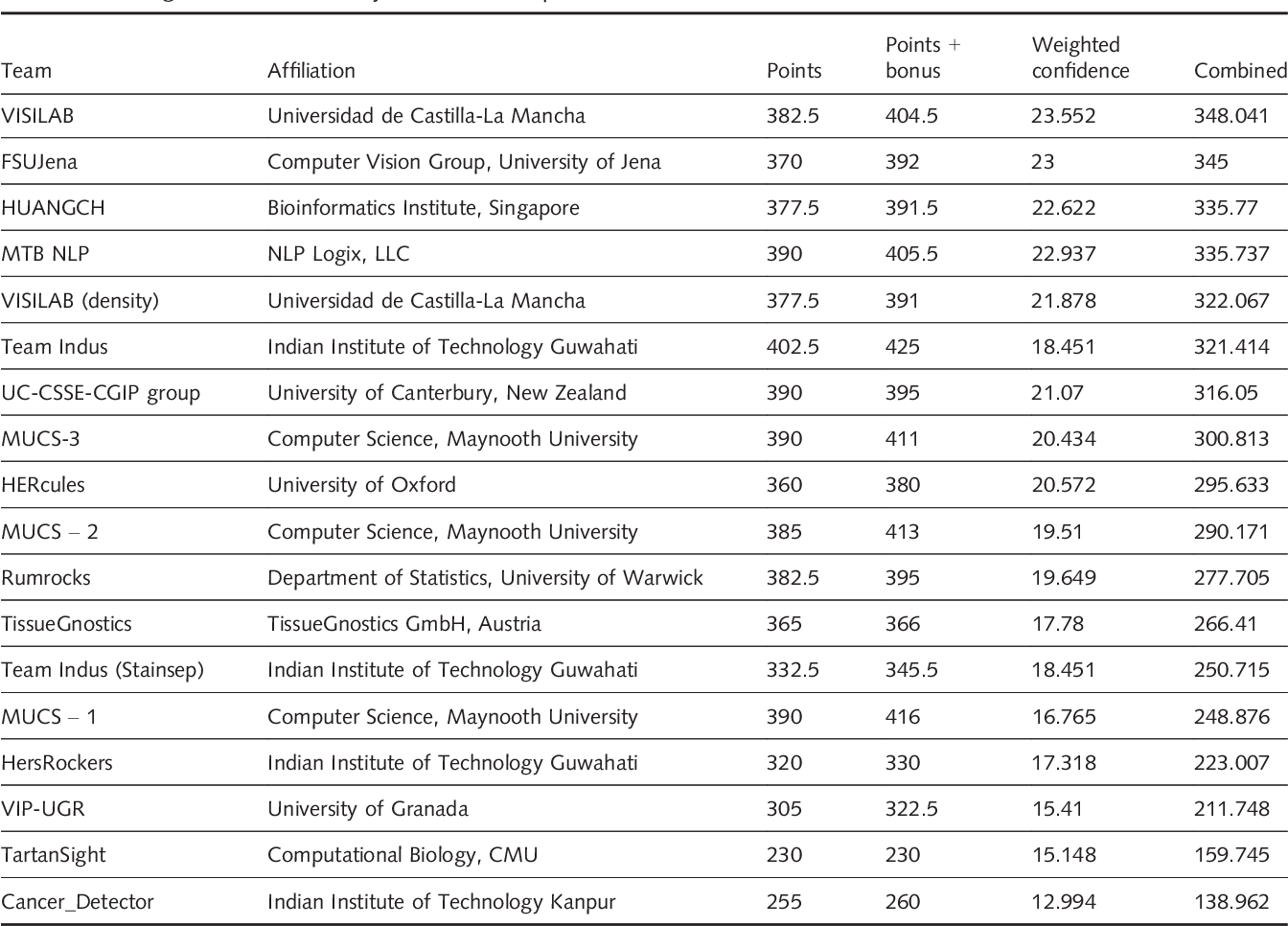 Evaluating expression of the Human epidermal growth factor receptor 2 (Her2) by visual examination of immunohistochemistry (IHC) on invasive breast cancer (BCa) is a key part of the diagnostic assessment of BCa due to its recognised importance as a predictive and prognostic marker in clinical practice. However, visual scoring of Her2 is subjective and consequently prone to inter-observer variability. Given the prognostic and therapeutic implications of Her2 scoring, a more objective method is required. In this paper, we report on a recent automated Her2 scoring contest, held in conjunction with the annual PathSoc meeting held in Nottingham in June 2016, aimed at systematically comparing and advancing the state-of-the-art Artificial Intelligence (AI) based automated methods for Her2 scoring. The contest dataset comprised of digitised whole slide images (WSI) of sections from 86 cases of invasive breast carcinoma stained with both Haematoxylin & Eosin (H&E) and IHC for Her2. The contesting algorithms automatically predicted scores of the IHC slides for an unseen subset of the dataset and the predicted scores were compared with the 'ground truth' (a consensus score from at least two experts). We also report on a simple Man vs Machine contest for the scoring of Her2 and show that the automated methods could beat the pathology experts on this contest dataset. This paper presents a benchmark for comparing the performance of automated algorithms for scoring of Her2. It also demonstrates the enormous potential of automated algorithms in assisting the pathologist with objective IHC scoring.