Belief merging is an important but difficult problem in Artificial Intelligence, especially when sources of information are pervaded with uncertainty. Many merging operators have been proposed to deal with this problem in possibilistic logic, a weighted logic which is powerful for handling inconsistency and deal- ing with uncertainty. They often result in a possibilistic knowledge base which is a set of weighted formulas. Although possibilistic logic is inconsistency tolerant, it suers from the well-known "drowning effect". Therefore, we may still want to obtain a consistent possi- bilistic knowledge base as the result of merg- ing. In such a case, we argue that it is not always necessary to keep weighted informa- tion after merging. In this paper, we define a merging operator that maps a set of pos- sibilistic knowledge bases and a formula rep- resenting the integrity constraints to a clas- sical knowledge base by using lexicographic ordering. We show that it satisfies nine pos- tulates that generalize basic postulates for propositional merging given in [11]. These postulates capture the principle of minimal change in some sense. We then provide an algorithm for generating the resulting knowl- edge base of our merging operator. Finally, we discuss the compatibility of our merging operator with propositional merging and es- tablish the advantage of our merging opera- tor over existing semantic merging operators in the propositional case. 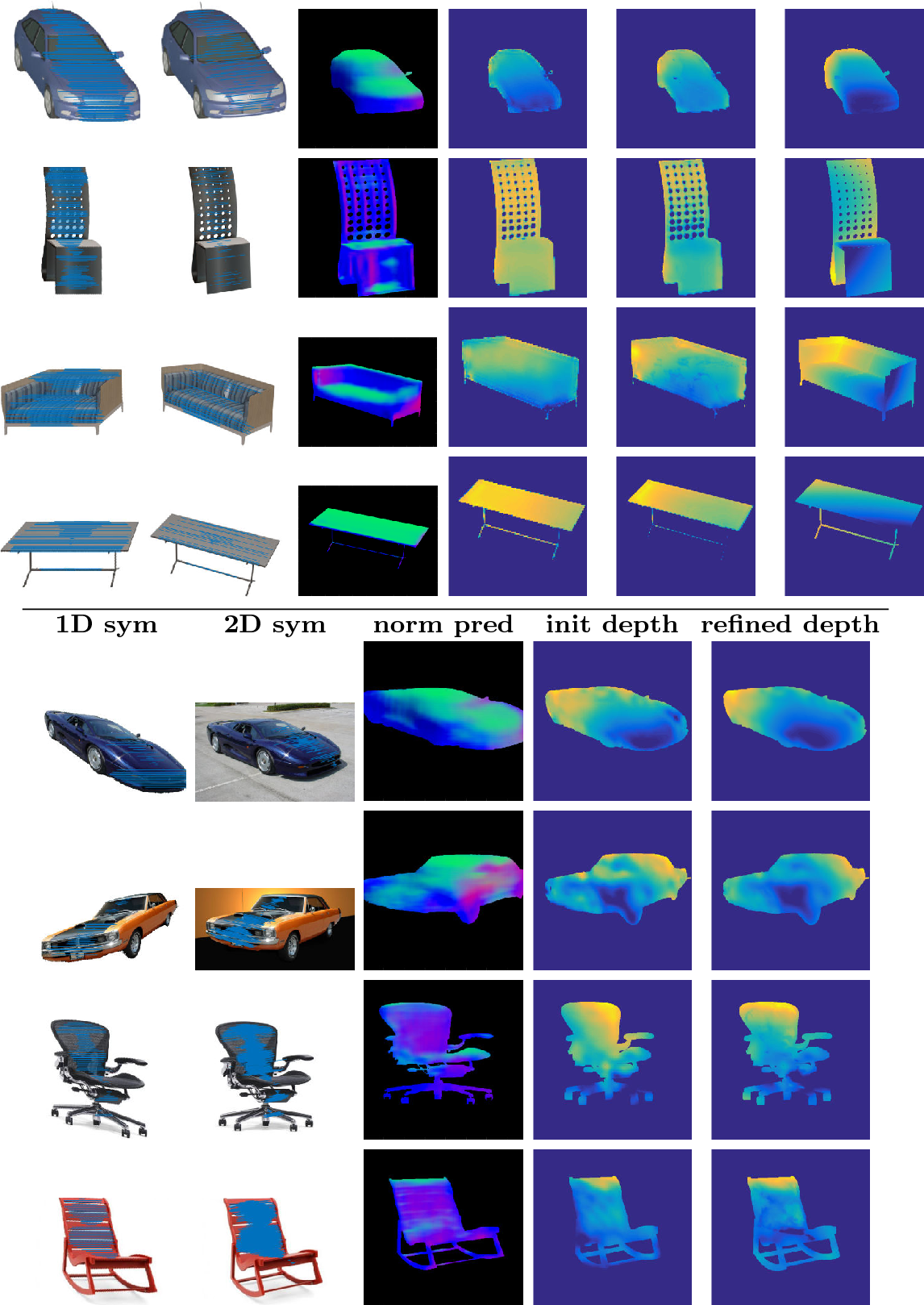 Due to the abundance of 2D product images from the Internet, developing efficient and scalable algorithms to recover the missing depth information is central to many applications. Recent works have addressed the single-view depth estimation problem by utilizing convolutional neural networks. In this paper, we show that exploring symmetry information, which is ubiquitous in man made objects, can significantly boost the quality of such depth predictions. Specifically, we propose a new convolutional neural network architecture to first estimate dense symmetric correspondences in a product image and then propose an optimization which utilizes this information explicitly to significantly improve the quality of single-view depth estimations. We have evaluated our approach extensively, and experimental results show that this approach outperforms state-of-the-art depth estimation techniques. 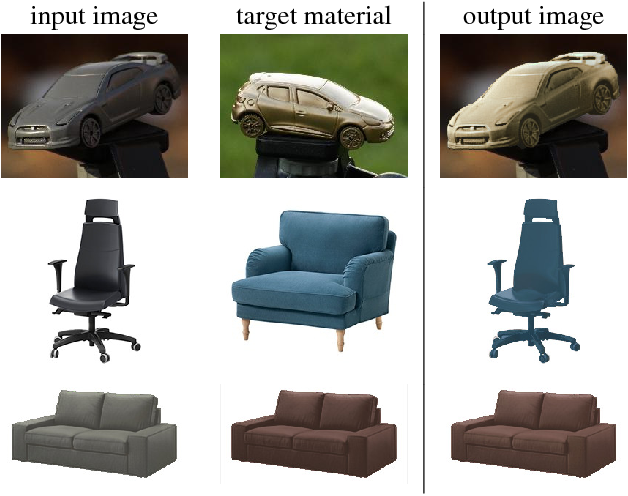 The ability to edit materials of objects in images is desirable by many content creators. However, this is an extremely challenging task as it requires to disentangle intrinsic physical properties of an image. We propose an end-to-end network architecture that replicates the forward image formation process to accomplish this task. Specifically, given a single image, the network first predicts intrinsic properties, i.e. shape, illumination, and material, which are then provided to a rendering layer. This layer performs in-network image synthesis, thereby enabling the network to understand the physics behind the image formation process. The proposed rendering layer is fully differentiable, supports both diffuse and specular materials, and thus can be applicable in a variety of problem settings. We demonstrate a rich set of visually plausible material editing examples and provide an extensive comparative study. 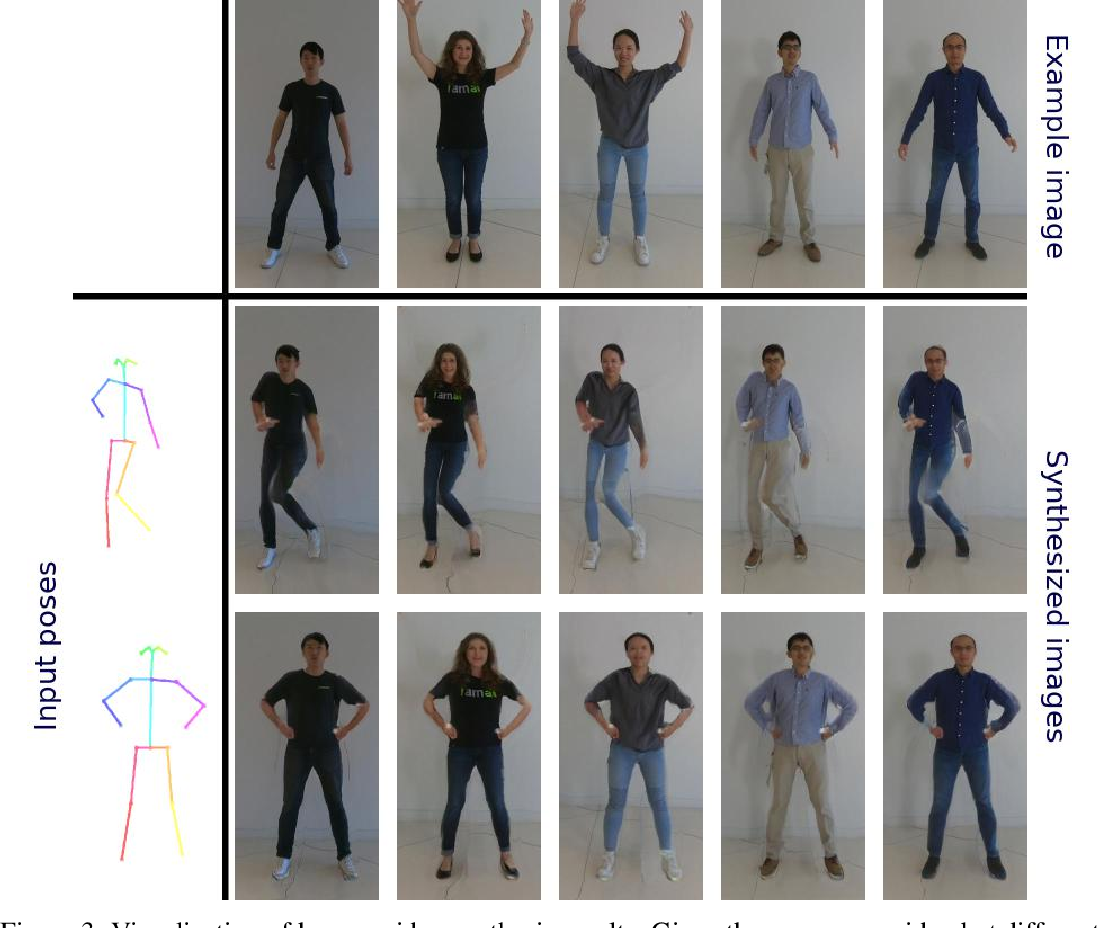 Video-to-video synthesis (vid2vid) aims at converting an input semantic video, such as videos of human poses or segmentation masks, to an output photorealistic video. While the state-of-the-art of vid2vid has advanced significantly, existing approaches share two major limitations. First, they are data-hungry. Numerous images of a target human subject or a scene are required for training. Second, a learned model has limited generalization capability. A pose-to-human vid2vid model can only synthesize poses of the single person in the training set. It does not generalize to other humans that are not in the training set. To address the limitations, we propose a few-shot vid2vid framework, which learns to synthesize videos of previously unseen subjects or scenes by leveraging few example images of the target at test time. Our model achieves this few-shot generalization capability via a novel network weight generation module utilizing an attention mechanism. We conduct extensive experimental validations with comparisons to strong baselines using several large-scale video datasets including human-dancing videos, talking-head videos, and street-scene videos. The experimental results verify the effectiveness of the proposed framework in addressing the two limitations of existing vid2vid approaches.

Neural Inverse Rendering of an Indoor Scene from a Single Image 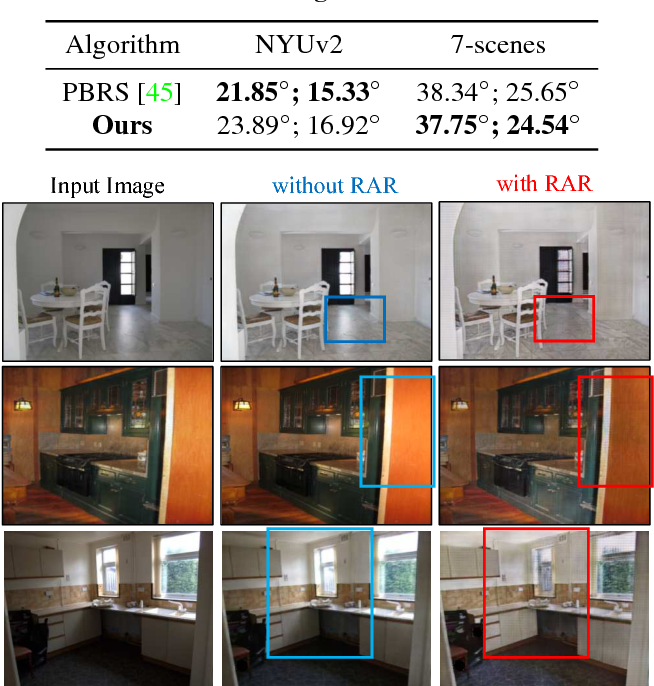 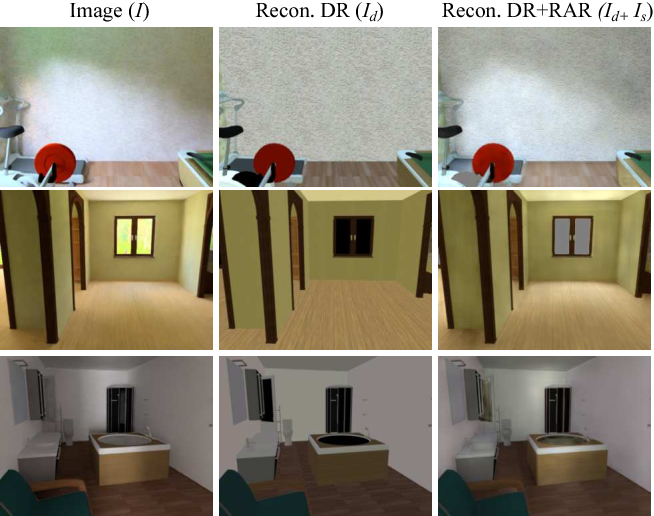 Inverse rendering aims to estimate physical scene attributes (e.g., reflectance, geometry, and lighting) from image(s). As a long-standing, highly ill-posed problem, inverse rendering has been studied primarily for single 3D objects or with methods that solve for only one of the scene attributes. To our knowledge, we are the first to propose a holistic approach for inverse rendering of an indoor scene from a single image with CNNs, which jointly estimates reflectance (albedo and gloss), surface normals and illumination. To address the lack of labeled real-world images, we create a large-scale synthetic dataset, named SUNCG-PBR, with physically-based rendering, which is a significant improvement over prior datasets. For fine-tuning on real images, we perform self-supervised learning using the reconstruction loss, which re-synthesizes the input images from the estimated components. To enable self-supervised learning on real data, our key contribution is the Residual Appearance Renderer (RAR), which can be trained to synthesize complex appearance effects (e.g., inter-reflection, cast shadows, near-field illumination, and realistic shading), which would be neglected otherwise. Experimental results show that our approach outperforms state-of-the-art methods, especially on real images. 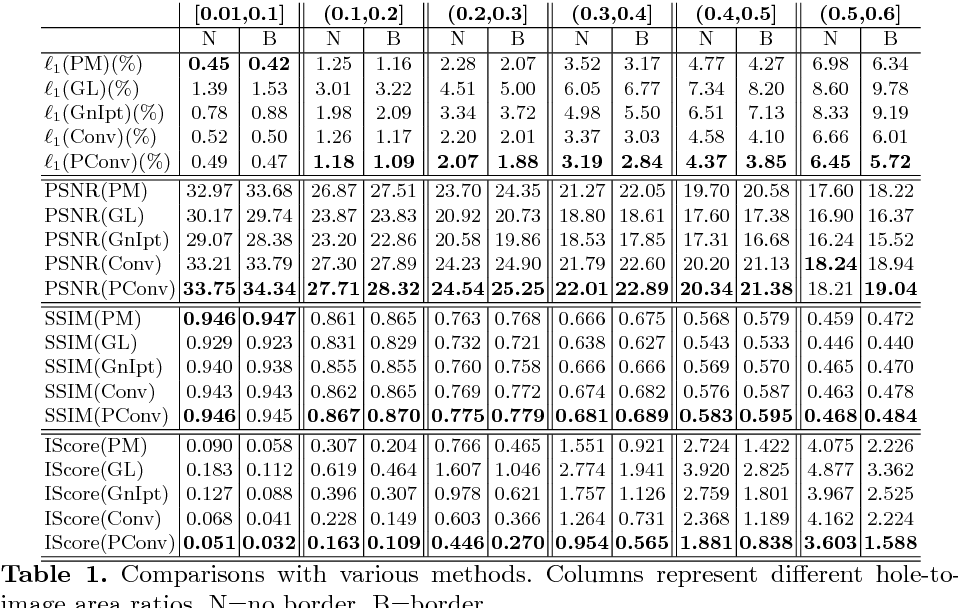 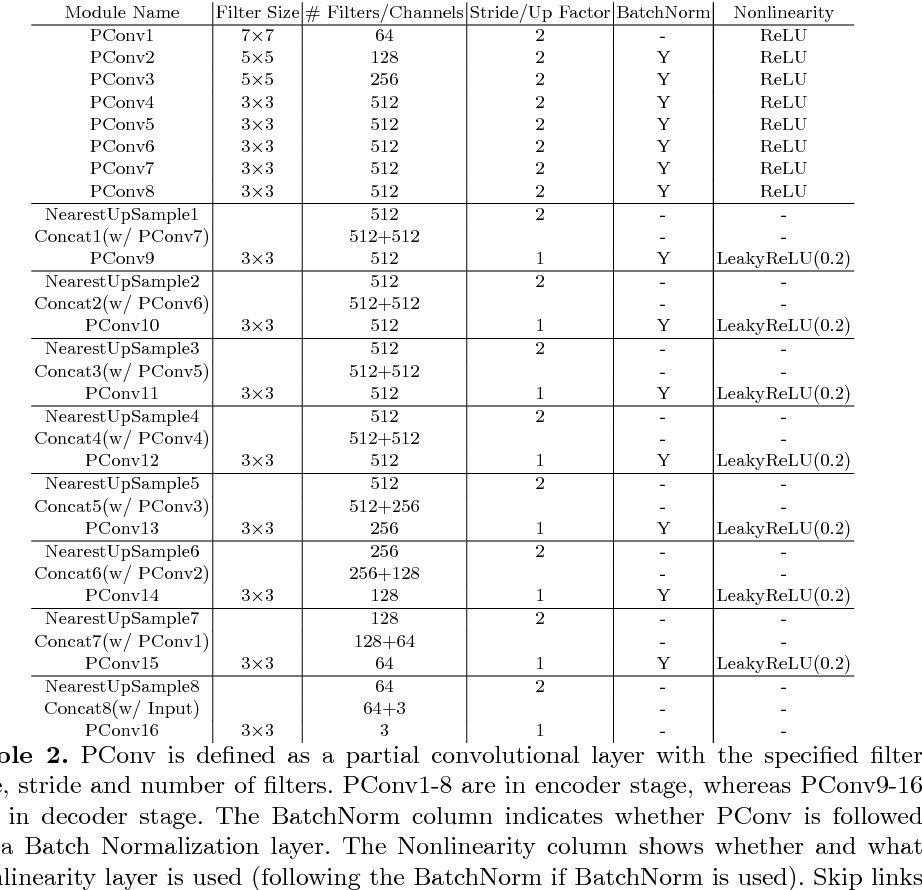 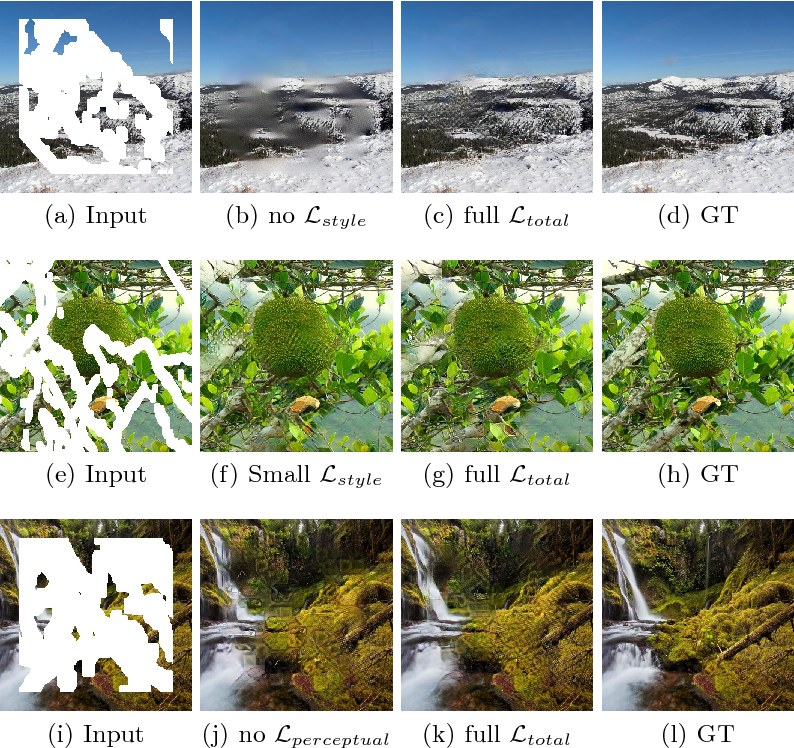 Existing deep learning based image inpainting methods use a standard convolutional network over the corrupted image, using convolutional filter responses conditioned on both valid pixels as well as the substitute values in the masked holes (typically the mean value). This often leads to artifacts such as color discrepancy and blurriness. Post-processing is usually used to reduce such artifacts, but are expensive and may fail. We propose the use of partial convolutions, where the convolution is masked and renormalized to be conditioned on only valid pixels. We further include a mechanism to automatically generate an updated mask for the next layer as part of the forward pass. Our model outperforms other methods for irregular masks. We show qualitative and quantitative comparisons with other methods to validate our approach.

Learning effective feature interactions is crucial for click-through rate (CTR) prediction tasks in recommender systems. In most of the existing deep learning models, feature interactions are either manually designed or simply enumerated. However, enumerating all feature interactions brings large memory and computation cost. Even worse, useless interactions may introduce unnecessary noise and complicate the training process. In this work, we propose a two-stage algorithm called Automatic Feature Interaction Selection (AutoFIS). AutoFIS can automatically identify all the important feature interactions for factorization models with just the computational cost equivalent to training the target model to convergence. In the \emph{search stage}, instead of searching over a discrete set of candidate feature interactions, we relax the choices to be continuous by introducing the architecture parameters. By implementing a regularized optimizer over the architecture parameters, the model can automatically identify and remove the redundant feature interactions during the training process of the model. In the \emph{re-train stage}, we keep the architecture parameters serving as an attention unit to further boost the performance. Offline experiments on three large-scale datasets (two public benchmarks, one private) demonstrate that the proposed AutoFIS can significantly improve various FM based models. AutoFIS has been deployed onto the training platform of Huawei App Store recommendation service, where a 10-day online A/B test demonstrated that AutoFIS improved the DeepFM model by 20.3\% and 20.1\% in terms of CTR and CVR respectively. 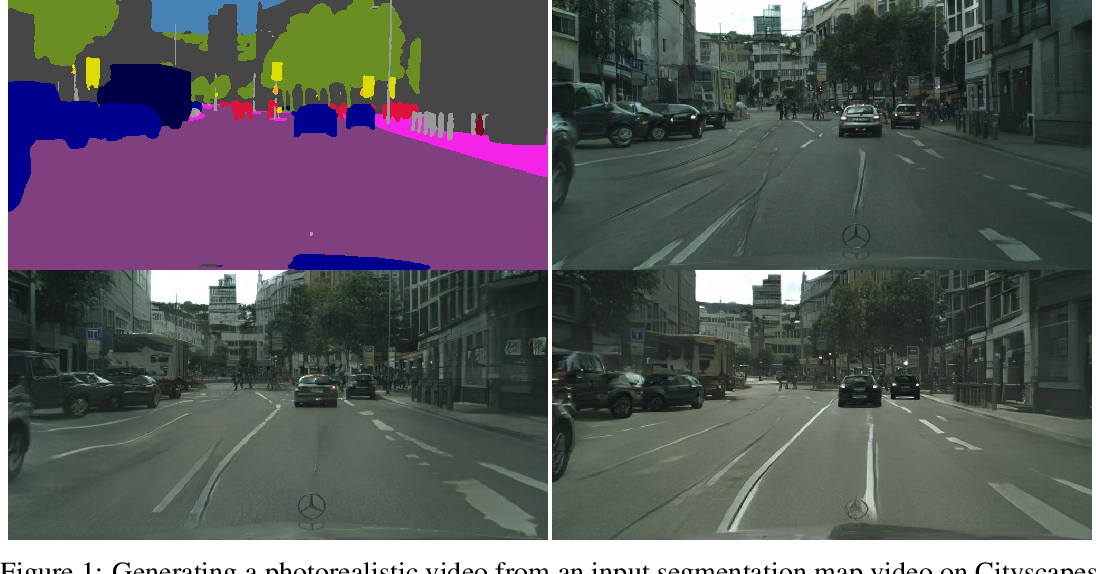 We study the problem of video-to-video synthesis, whose goal is to learn a mapping function from an input source video (e.g., a sequence of semantic segmentation masks) to an output photorealistic video that precisely depicts the content of the source video. While its image counterpart, the image-to-image synthesis problem, is a popular topic, the video-to-video synthesis problem is less explored in the literature. Without understanding temporal dynamics, directly applying existing image synthesis approaches to an input video often results in temporally incoherent videos of low visual quality. In this paper, we propose a novel video-to-video synthesis approach under the generative adversarial learning framework. Through carefully-designed generator and discriminator architectures, coupled with a spatio-temporal adversarial objective, we achieve high-resolution, photorealistic, temporally coherent video results on a diverse set of input formats including segmentation masks, sketches, and poses. Experiments on multiple benchmarks show the advantage of our method compared to strong baselines. In particular, our model is capable of synthesizing 2K resolution videos of street scenes up to 30 seconds long, which significantly advances the state-of-the-art of video synthesis. Finally, we apply our approach to future video prediction, outperforming several state-of-the-art competing systems.


* Code, models, and more results are available at https://github.com/NVIDIA/vid2vid

We present an approach for high-resolution video frame prediction by conditioning on both past frames and past optical flows. Previous approaches rely on resampling past frames, guided by a learned future optical flow, or on direct generation of pixels. Resampling based on flow is insufficient because it cannot deal with disocclusions. Generative models currently lead to blurry results. Recent approaches synthesis a pixel by convolving input patches with a predicted kernel. However, their memory requirement increases with kernel size. Here, we spatially-displaced convolution (SDC) module for video frame prediction. We learn a motion vector and a kernel for each pixel and synthesize a pixel by applying the kernel at a displaced location in the source image, defined by the predicted motion vector. Our approach inherits the merits of both vector-based and kernel-based approaches, while ameliorating their respective disadvantages. We train our model on 428K unlabelled 1080p video game frames. Our approach produces state-of-the-art results, achieving an SSIM score of 0.904 on high-definition YouTube-8M videos, 0.918 on Caltech Pedestrian videos. Our model handles large motion effectively and synthesizes crisp frames with consistent motion. 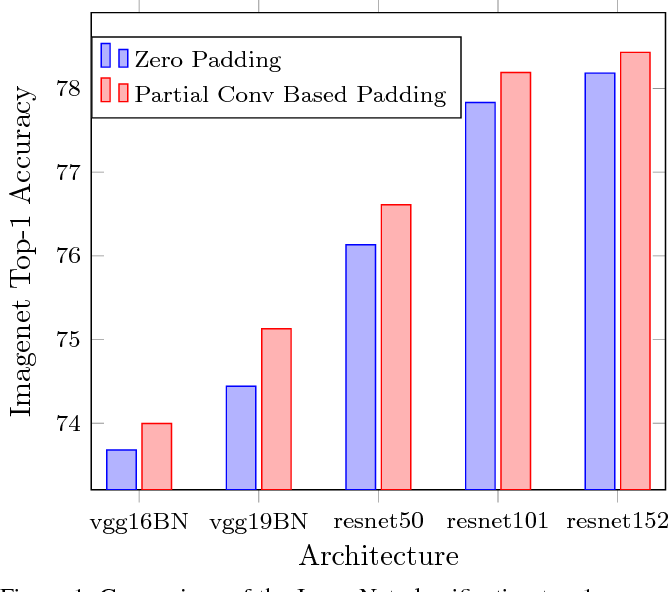 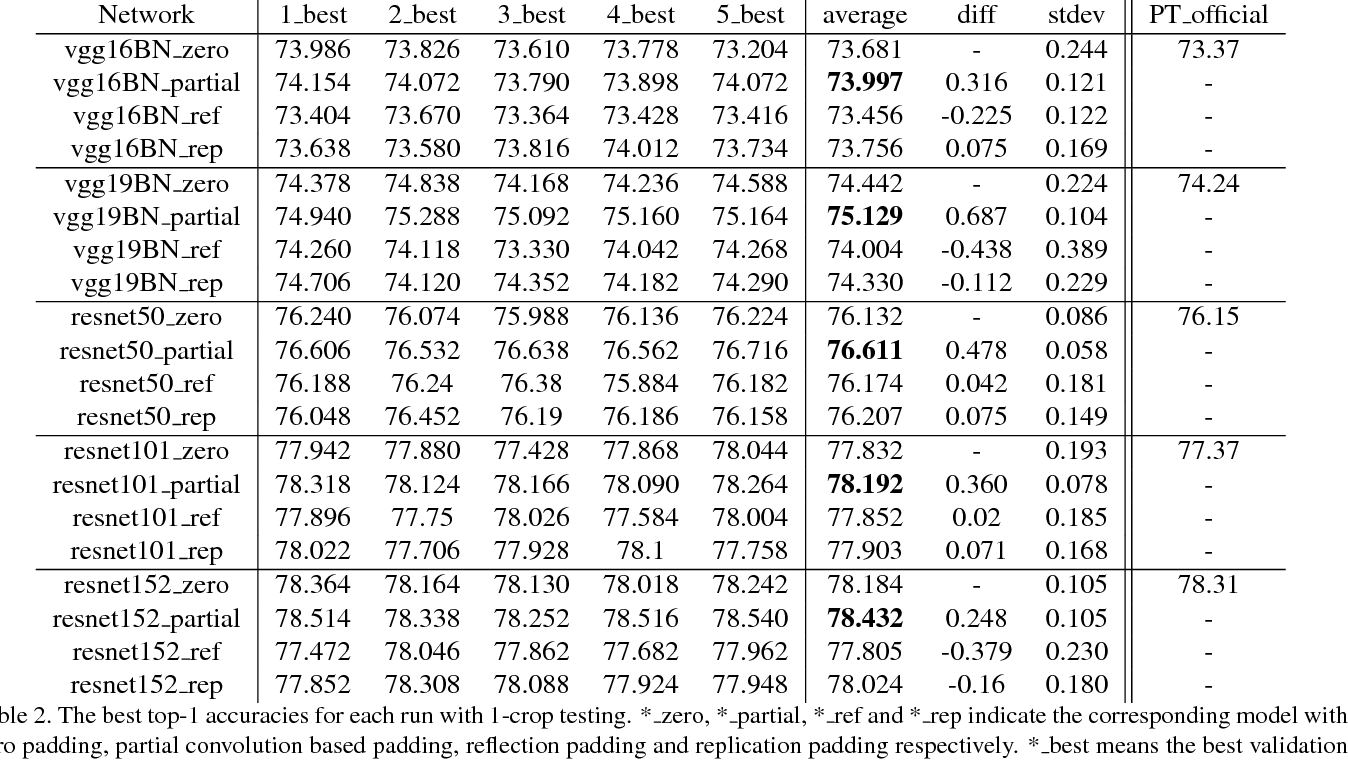 In this paper, we present a simple yet effective padding scheme that can be used as a drop-in module for existing convolutional neural networks. We call it partial convolution based padding, with the intuition that the padded region can be treated as holes and the original input as non-holes. Specifically, during the convolution operation, the convolution results are re-weighted near image borders based on the ratios between the padded area and the convolution sliding window area. Extensive experiments with various deep network models on ImageNet classification and semantic segmentation demonstrate that the proposed padding scheme consistently outperforms standard zero padding with better accuracy.


* 11 pages; code is available at https://github.com/NVIDIA/partialconv 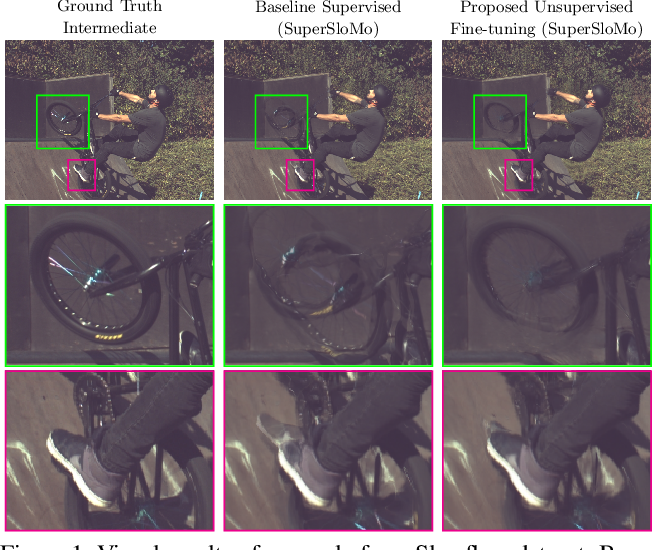 Learning to synthesize high frame rate videos via interpolation requires large quantities of high frame rate training videos, which, however, are scarce, especially at high resolutions. Here, we propose unsupervised techniques to synthesize high frame rate videos directly from low frame rate videos using cycle consistency. For a triplet of consecutive frames, we optimize models to minimize the discrepancy between the center frame and its cycle reconstruction, obtained by interpolating back from interpolated intermediate frames. This simple unsupervised constraint alone achieves results comparable with supervision using the ground truth intermediate frames. We further introduce a pseudo supervised loss term that enforces the interpolated frames to be consistent with predictions of a pre-trained interpolation model. The pseudo supervised loss term, used together with cycle consistency, can effectively adapt a pre-trained model to a new target domain. With no additional data and in a completely unsupervised fashion, our techniques significantly improve pre-trained models on new target domains, increasing PSNR values from 32.84dB to 33.05dB on the Slowflow and from 31.82dB to 32.53dB on the Sintel evaluation datasets.

Knowledge graph models world knowledge as concepts, entities, and the relationships between them, which has been widely used in many real-world tasks. CCKS 2019 held an evaluation track with 6 tasks and attracted more than 1,600 teams. In this paper, we give an overview of the knowledge graph evaluation tract at CCKS 2019. By reviewing the task definition, successful methods, useful resources, good strategies and research challenges associated with each task in CCKS 2019, this paper can provide a helpful reference for developing knowledge graph applications and conducting future knowledge graph researches.