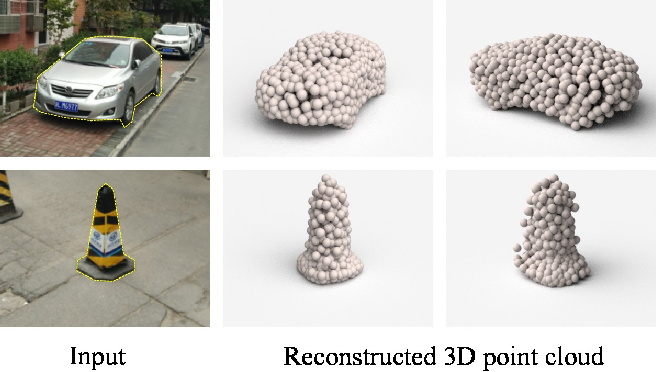 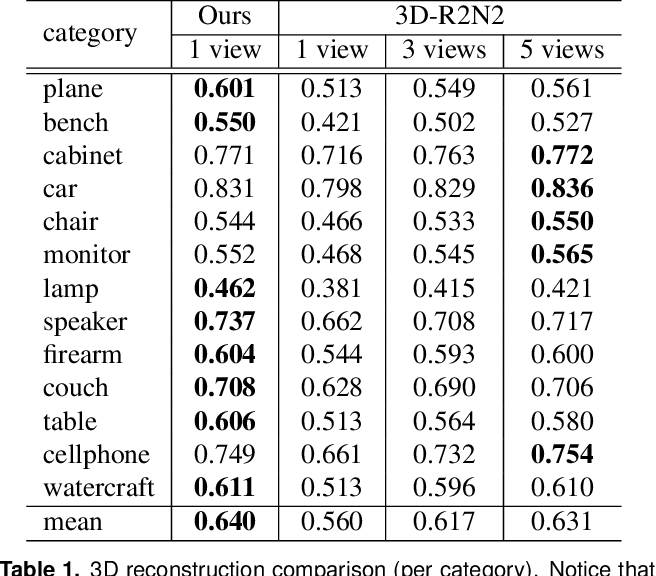 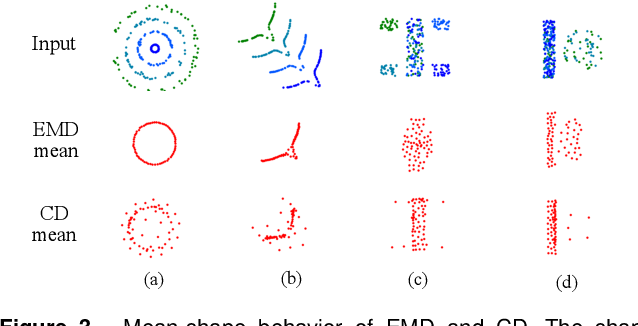 Generation of 3D data by deep neural network has been attracting increasing attention in the research community. The majority of extant works resort to regular representations such as volumetric grids or collection of images; however, these representations obscure the natural invariance of 3D shapes under geometric transformations and also suffer from a number of other issues. In this paper we address the problem of 3D reconstruction from a single image, generating a straight-forward form of output -- point cloud coordinates. Along with this problem arises a unique and interesting issue, that the groundtruth shape for an input image may be ambiguous. Driven by this unorthodox output form and the inherent ambiguity in groundtruth, we design architecture, loss function and learning paradigm that are novel and effective. Our final solution is a conditional shape sampler, capable of predicting multiple plausible 3D point clouds from an input image. In experiments not only can our system outperform state-of-the-art methods on single image based 3d reconstruction benchmarks; but it also shows a strong performance for 3d shape completion and promising ability in making multiple plausible predictions. 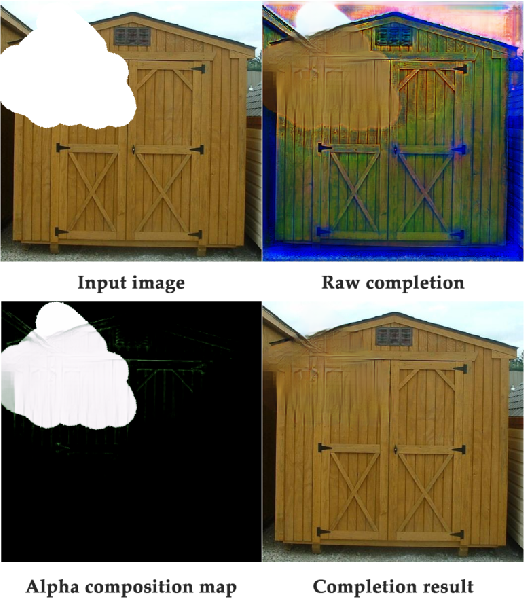 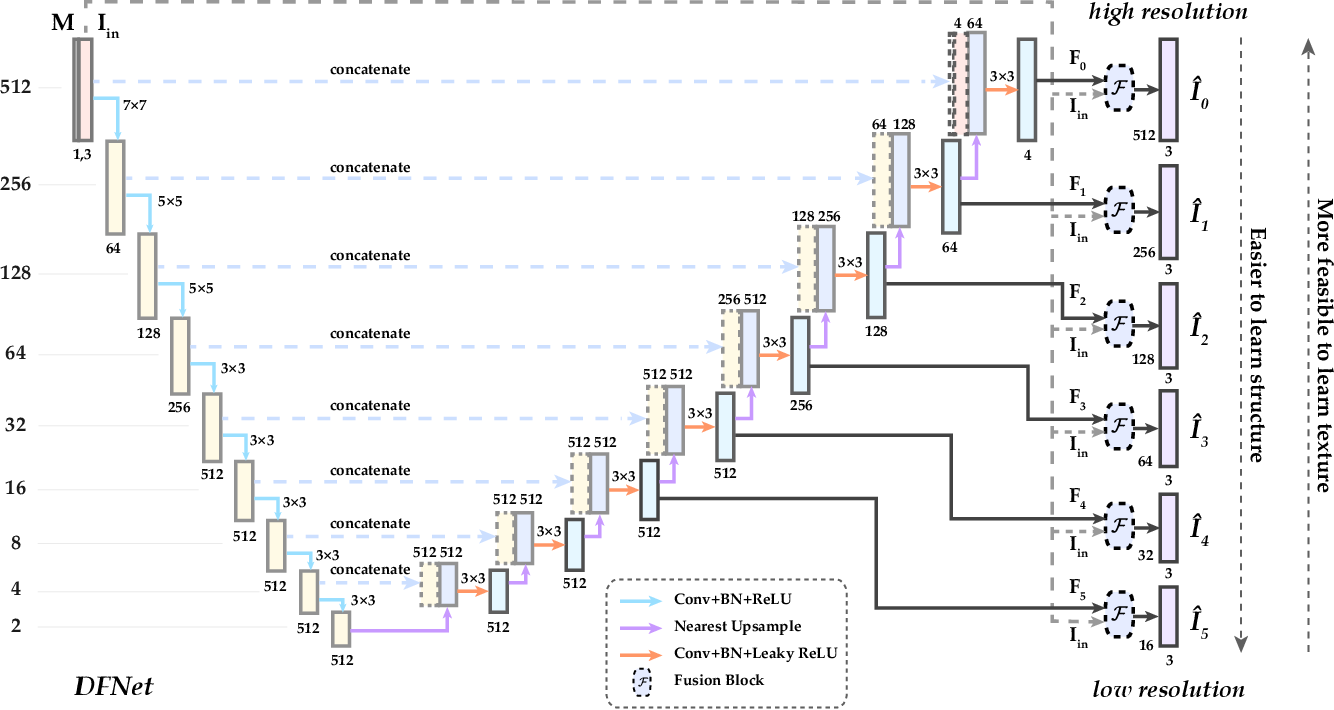 Deep image completion usually fails to harmonically blend the restored image into existing content, especially in the boundary area. This paper handles with this problem from a new perspective of creating a smooth transition and proposes a concise Deep Fusion Network (DFNet). Firstly, a fusion block is introduced to generate a flexible alpha composition map for combining known and unknown regions. The fusion block not only provides a smooth fusion between restored and existing content, but also provides an attention map to make network focus more on the unknown pixels. In this way, it builds a bridge for structural and texture information, so that information can be naturally propagated from known region into completion. Furthermore, fusion blocks are embedded into several decoder layers of the network. Accompanied by the adjustable loss constraints on each layer, more accurate structure information are achieved. We qualitatively and quantitatively compare our method with other state-of-the-art methods on Places2 and CelebA datasets. The results show the superior performance of DFNet, especially in the aspects of harmonious texture transition, texture detail and semantic structural consistency. Our source code will be avaiable at: \url{https://github.com/hughplay/DFNet} 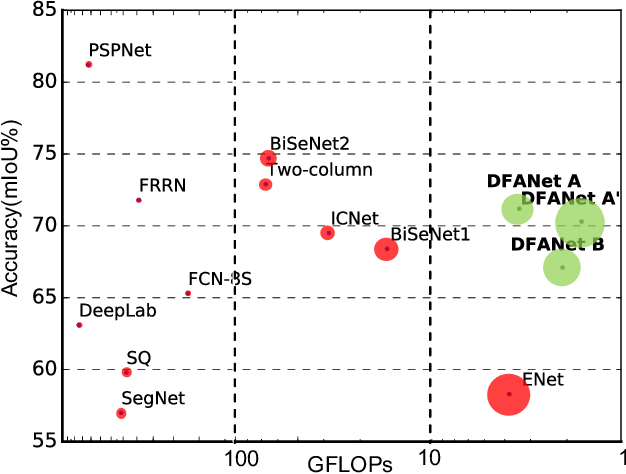 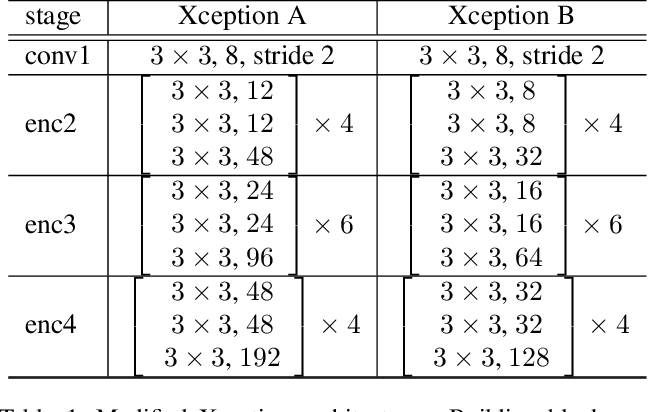 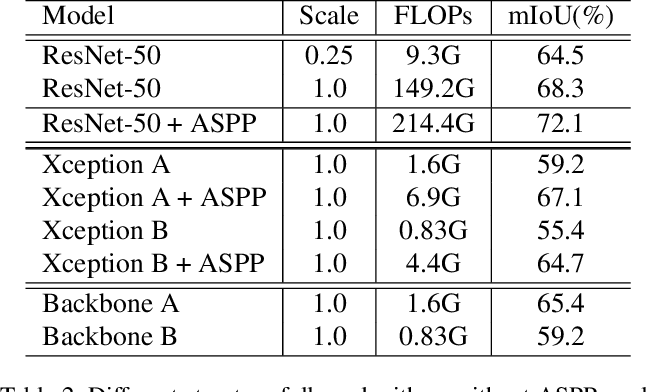 This paper introduces an extremely efficient CNN architecture named DFANet for semantic segmentation under resource constraints. Our proposed network starts from a single lightweight backbone and aggregates discriminative features through sub-network and sub-stage cascade respectively. Based on the multi-scale feature propagation, DFANet substantially reduces the number of parameters, but still obtains sufficient receptive field and enhances the model learning ability, which strikes a balance between the speed and segmentation performance. Experiments on Cityscapes and CamVid datasets demonstrate the superior performance of DFANet with 8$\times$ less FLOPs and 2$\times$ faster than the existing state-of-the-art real-time semantic segmentation methods while providing comparable accuracy. Specifically, it achieves 70.3\% Mean IOU on the Cityscapes test dataset with only 1.7 GFLOPs and a speed of 160 FPS on one NVIDIA Titan X card, and 71.3\% Mean IOU with 3.4 GFLOPs while inferring on a higher resolution image. 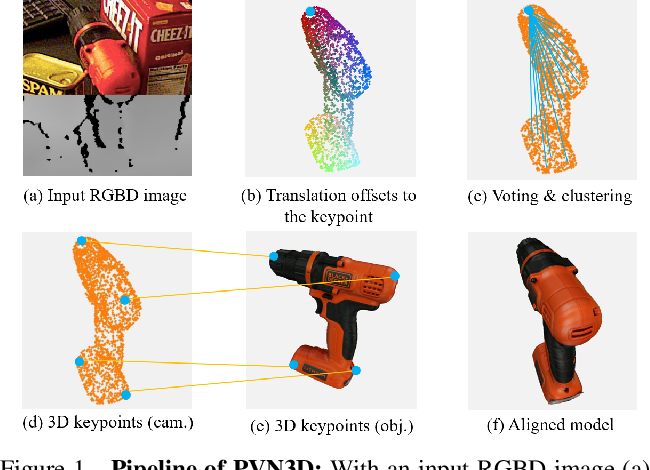 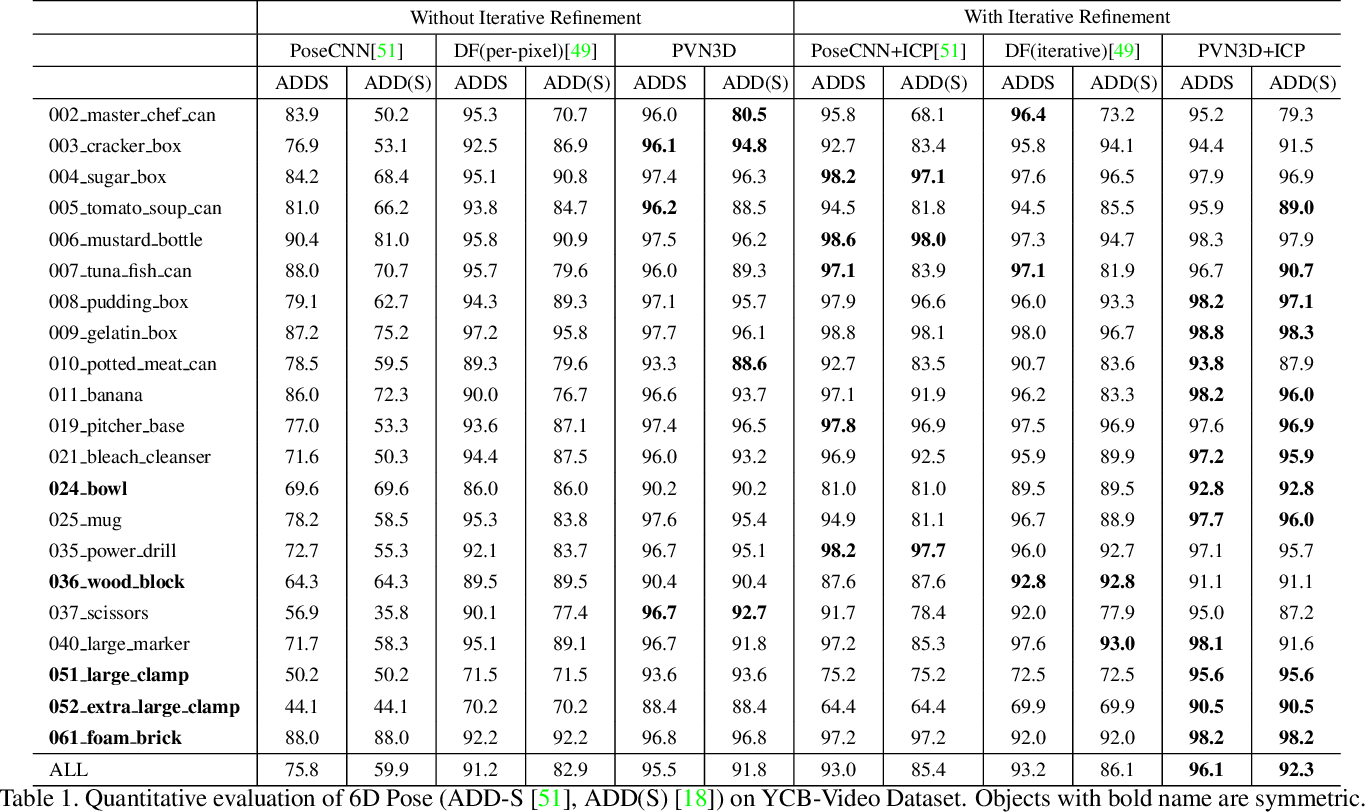 In this work, we present a novel data-driven method for robust 6DoF object pose estimation from a single RGBD image. Unlike previous methods that directly regressing pose parameters, we tackle this challenging task with a keypoint-based approach. Specifically, we propose a deep Hough voting network to detect 3D keypoints of objects and then estimate the 6D pose parameters within a least-squares fitting manner. Our method is a natural extension of 2D-keypoint approaches that successfully work on RGB based 6DoF estimation. It allows us to fully utilize the geometric constraint of rigid objects with the extra depth information and is easy for a network to learn and optimize. Extensive experiments were conducted to demonstrate the effectiveness of 3D-keypoint detection in the 6D pose estimation task. Experimental results also show our method outperforms the state-of-the-art methods by large margins on several benchmarks. 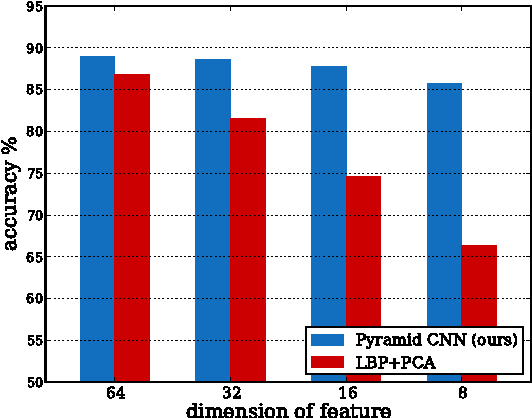 Face representation is a crucial step of face recognition systems. An optimal face representation should be discriminative, robust, compact, and very easy-to-implement. While numerous hand-crafted and learning-based representations have been proposed, considerable room for improvement is still present. In this paper, we present a very easy-to-implement deep learning framework for face representation. Our method bases on a new structure of deep network (called Pyramid CNN). The proposed Pyramid CNN adopts a greedy-filter-and-down-sample operation, which enables the training procedure to be very fast and computation-efficient. In addition, the structure of Pyramid CNN can naturally incorporate feature sharing across multi-scale face representations, increasing the discriminative ability of resulting representation. Our basic network is capable of achieving high recognition accuracy ($85.8\%$ on LFW benchmark) with only 8 dimension representation. When extended to feature-sharing Pyramid CNN, our system achieves the state-of-the-art performance ($97.3\%$) on LFW benchmark. We also introduce a new benchmark of realistic face images on social network and validate our proposed representation has a good ability of generalization.

Most previous image matting methods require a roughly-specificed trimap as input, and estimate fractional alpha values for all pixels that are in the unknown region of the trimap. In this paper, we argue that directly estimating the alpha matte from a coarse trimap is a major limitation of previous methods, as this practice tries to address two difficult and inherently different problems at the same time: identifying true blending pixels inside the trimap region, and estimate accurate alpha values for them. We propose AdaMatting, a new end-to-end matting framework that disentangles this problem into two sub-tasks: trimap adaptation and alpha estimation. Trimap adaptation is a pixel-wise classification problem that infers the global structure of the input image by identifying definite foreground, background, and semi-transparent image regions. Alpha estimation is a regression problem that calculates the opacity value of each blended pixel. Our method separately handles these two sub-tasks within a single deep convolutional neural network (CNN). Extensive experiments show that AdaMatting has additional structure awareness and trimap fault-tolerance. Our method achieves the state-of-the-art performance on Adobe Composition-1k dataset both qualitatively and quantitatively. It is also the current best-performing method on the alphamatting.com online evaluation for all commonly-used metrics. 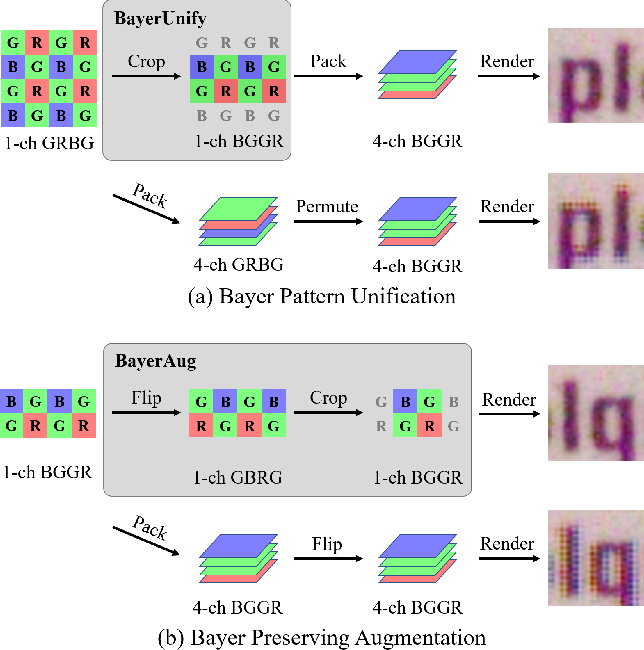 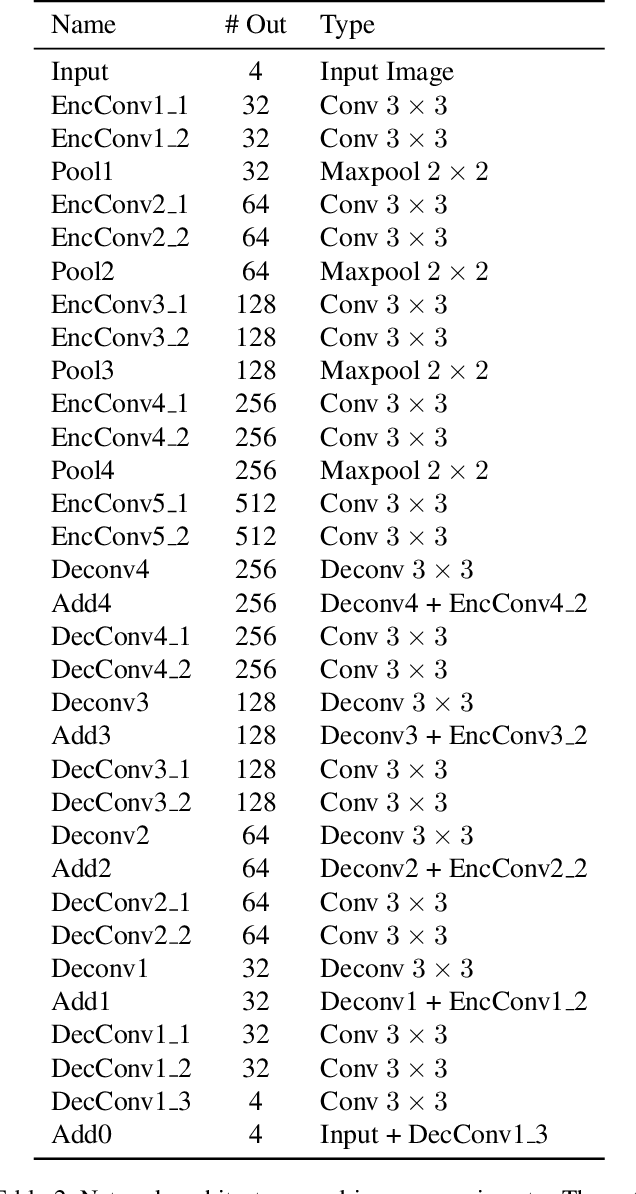 In this paper, we present new data pre-processing and augmentation techniques for DNN-based raw image denoising. Compared with traditional RGB image denoising, performing this task on direct camera sensor readings presents new challenges such as how to effectively handle various Bayer patterns from different data sources, and subsequently how to perform valid data augmentation with raw images. To address the first problem, we propose a Bayer pattern unification (BayerUnify) method to unify different Bayer patterns. This allows us to fully utilize a heterogeneous dataset to train a single denoising model instead of training one model for each pattern. Furthermore, while it is essential to augment the dataset to improve model generalization and performance, we discovered that it is error-prone to modify raw images by adapting augmentation methods designed for RGB images. Towards this end, we present a Bayer preserving augmentation (BayerAug) method as an effective approach for raw image augmentation. Combining these data processing technqiues with a modified U-Net, our method achieves a PSNR of 52.11 and a SSIM of 0.9969 in NTIRE 2019 Real Image Denoising Challenge, demonstrating the state-of-the-art performance.