We introduce TrustVI, a fast second-order algorithm for black-box variational inference based on trust-region optimization and the reparameterization trick. At each iteration, TrustVI proposes and assesses a step based on minibatches of draws from the variational distribution. The algorithm provably converges to a stationary point. We implemented TrustVI in the Stan framework and compared it to two alternatives: Automatic Differentiation Variational Inference (ADVI) and Hessian-free Stochastic Gradient Variational Inference (HFSGVI). The former is based on stochastic first-order optimization. The latter uses second-order information, but lacks convergence guarantees. TrustVI typically converged at least one order of magnitude faster than ADVI, demonstrating the value of stochastic second-order information. TrustVI often found substantially better variational distributions than HFSGVI, demonstrating that our convergence theory can matter in practice.

Parameterizing the approximate posterior of a generative model with neural networks has become a common theme in recent machine learning research. While providing appealing flexibility, this approach makes it difficult to impose or assess structural constraints such as conditional independence. We propose a framework for learning representations that relies on Auto-Encoding Variational Bayes and whose search space is constrained via kernel-based measures of independence. In particular, our method employs the $d$-variable Hilbert-Schmidt Independence Criterion (dHSIC) to enforce independence between the latent representations and arbitrary nuisance factors. We show how to apply this method to a range of problems, including the problems of learning invariant representations and the learning of interpretable representations. We also present a full-fledged application to single-cell RNA sequencing (scRNA-seq). In this setting the biological signal is mixed in complex ways with sequencing errors and sampling effects. We show that our method out-performs the state-of-the-art in this domain. 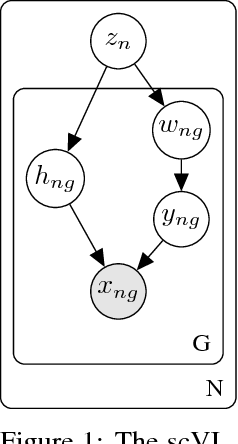 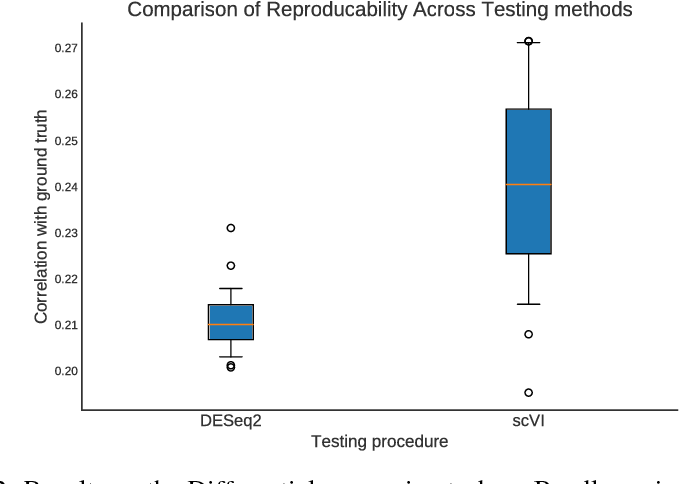 We propose a probabilistic model for interpreting gene expression levels that are observed through single-cell RNA sequencing. In the model, each cell has a low-dimensional latent representation. Additional latent variables account for technical effects that may erroneously set some observations of gene expression levels to zero. Conditional distributions are specified by neural networks, giving the proposed model enough flexibility to fit the data well. We use variational inference and stochastic optimization to approximate the posterior distribution. The inference procedure scales to over one million cells, whereas competing algorithms do not. Even for smaller datasets, for several tasks, the proposed procedure outperforms state-of-the-art methods like ZIFA and ZINB-WaVE. We also extend our framework to account for batch effects and other confounding factors, and propose a Bayesian hypothesis test for differential expression that outperforms DESeq2. 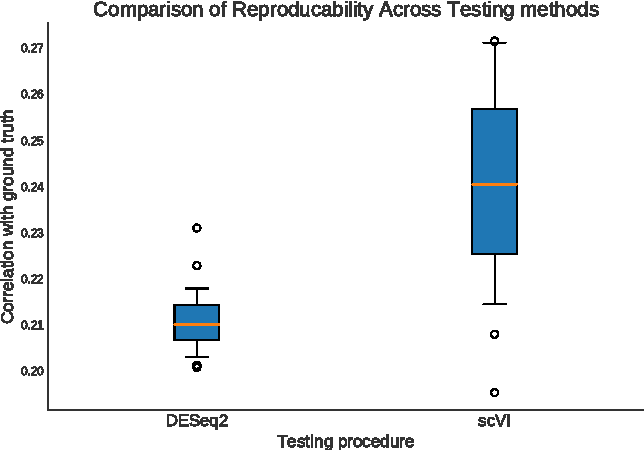 We propose a probabilistic model for interpreting gene expression levels that are observed through single-cell RNA sequencing. In the model, each cell has a low-dimensional latent representation. Additional latent variables account for technical effects that may erroneously set some observations of gene expression levels to zero. Conditional distributions are specified by neural networks, giving the proposed model enough flexibility to fit the data well. We use variational inference and stochastic optimization to approximate the posterior distribution. The inference procedure scales to over one million cells, whereas competing algorithms do not. Even for smaller datasets, for several tasks, the proposed procedure outperforms state-of-the-art methods like ZIFA and ZINB-WaVE. We also extend our framework to take into account batch effects and other confounding factors and propose a natural Bayesian hypothesis framework for differential expression that outperforms tradition DESeq2. 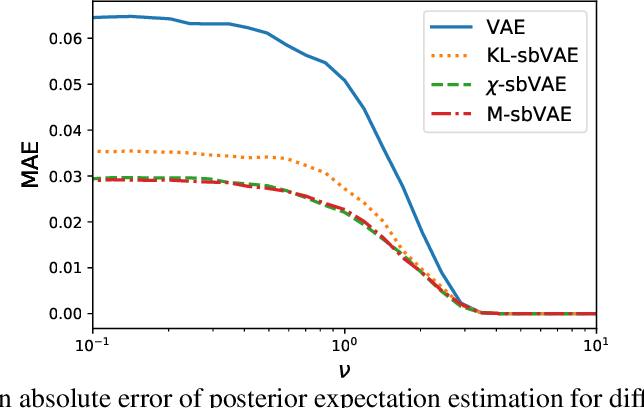 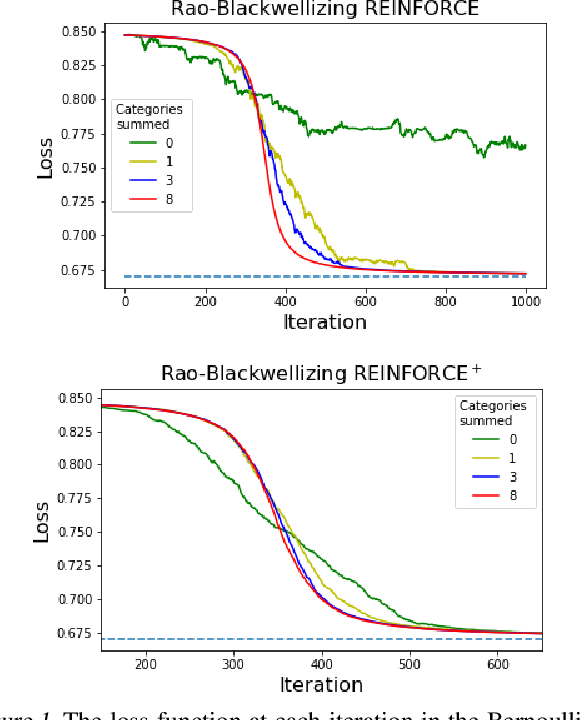 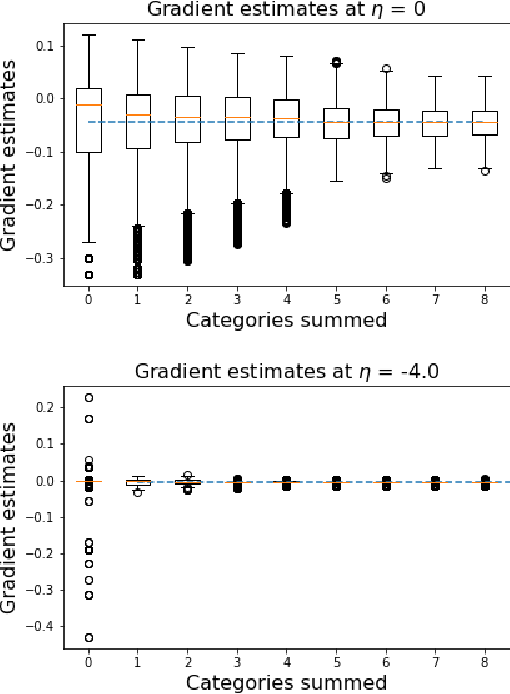 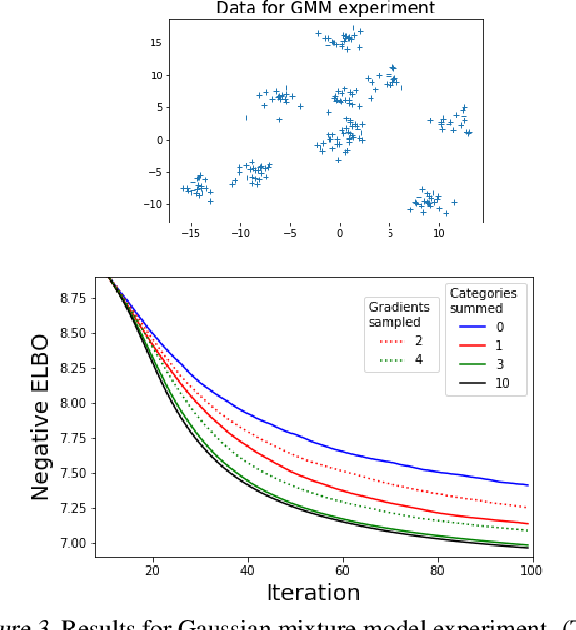 We wish to compute the gradient of an expectation over a finite or countably infinite sample space having $K \leq \infty$ categories. When $K$ is indeed infinite, or finite but very large, the relevant summation is intractable. Accordingly, various stochastic gradient estimators have been proposed. In this paper, we describe a technique that can be applied to reduce the variance of any such estimator, without changing its bias---in particular, unbiasedness is retained. We show that our technique is an instance of Rao-Blackwellization, and we demonstrate the improvement it yields in empirical studies on both synthetic and real-world data. 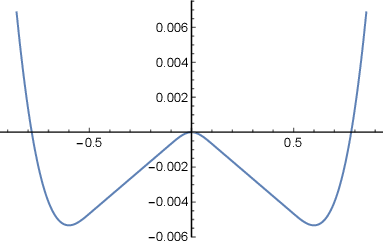 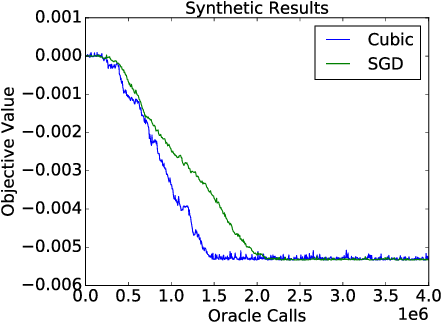 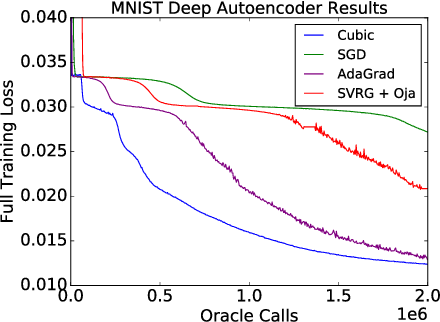 This paper proposes a stochastic variant of a classic algorithm---the cubic-regularized Newton method [Nesterov and Polyak 2006]. The proposed algorithm efficiently escapes saddle points and finds approximate local minima for general smooth, nonconvex functions in only $\mathcal{\tilde{O}}(\epsilon^{-3.5})$ stochastic gradient and stochastic Hessian-vector product evaluations. The latter can be computed as efficiently as stochastic gradients. This improves upon the $\mathcal{\tilde{O}}(\epsilon^{-4})$ rate of stochastic gradient descent. Our rate matches the best-known result for finding local minima without requiring any delicate acceleration or variance-reduction techniques.

A Deep Generative Model for Semi-Supervised Classification with Noisy Labels 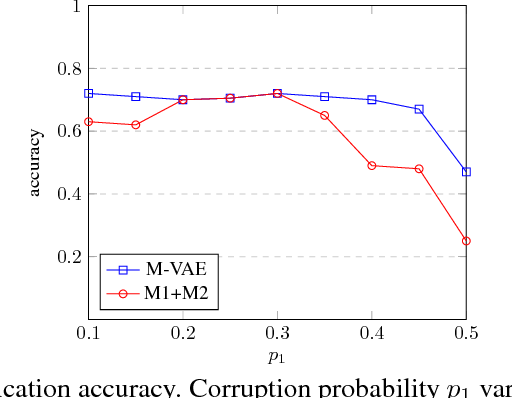 Class labels are often imperfectly observed, due to mistakes and to genuine ambiguity among classes. We propose a new semi-supervised deep generative model that explicitly models noisy labels, called the Mislabeled VAE (M-VAE). The M-VAE can perform better than existing deep generative models which do not account for label noise. Additionally, the derivation of M-VAE gives new theoretical insights into the popular M1+M2 semi-supervised model. 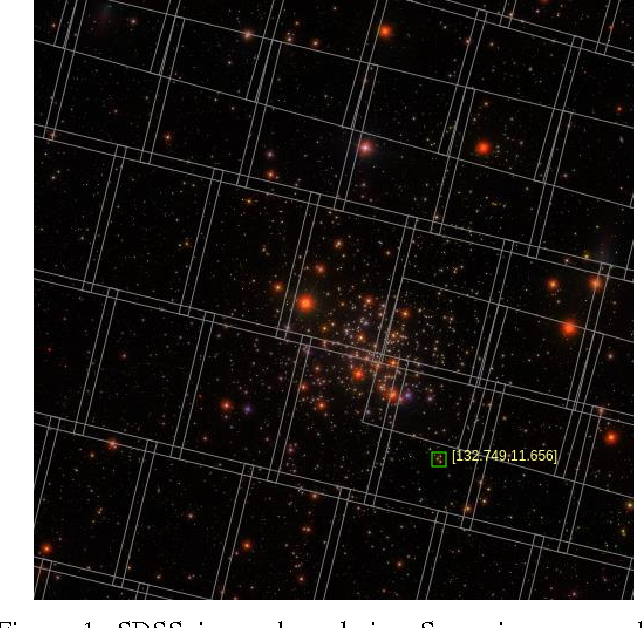 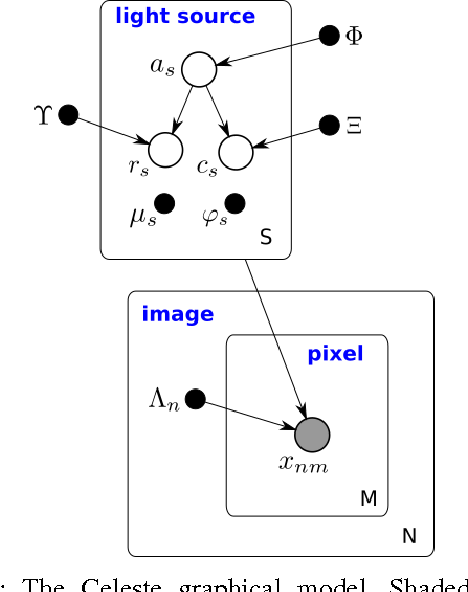 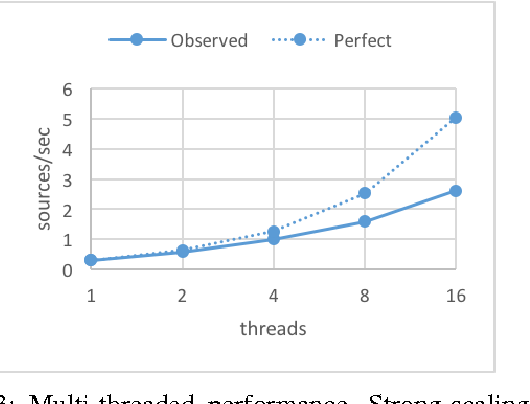 Celeste is a procedure for inferring astronomical catalogs that attains state-of-the-art scientific results. To date, Celeste has been scaled to at most hundreds of megabytes of astronomical images: Bayesian posterior inference is notoriously demanding computationally. In this paper, we report on a scalable, parallel version of Celeste, suitable for learning catalogs from modern large-scale astronomical datasets. Our algorithmic innovations include a fast numerical optimization routine for Bayesian posterior inference and a statistically efficient scheme for decomposing astronomical optimization problems into subproblems. Our scalable implementation is written entirely in Julia, a new high-level dynamic programming language designed for scientific and numerical computing. We use Julia's high-level constructs for shared and distributed memory parallelism, and demonstrate effective load balancing and efficient scaling on up to 8192 Xeon cores on the NERSC Cori supercomputer. 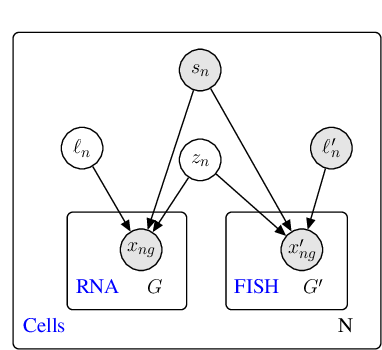 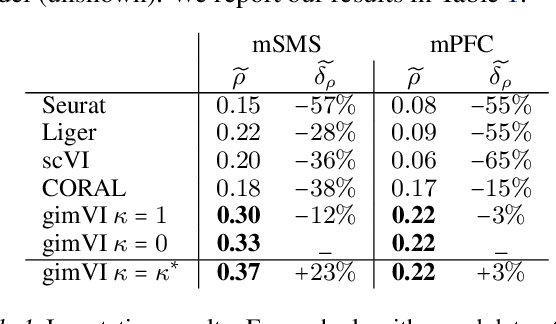 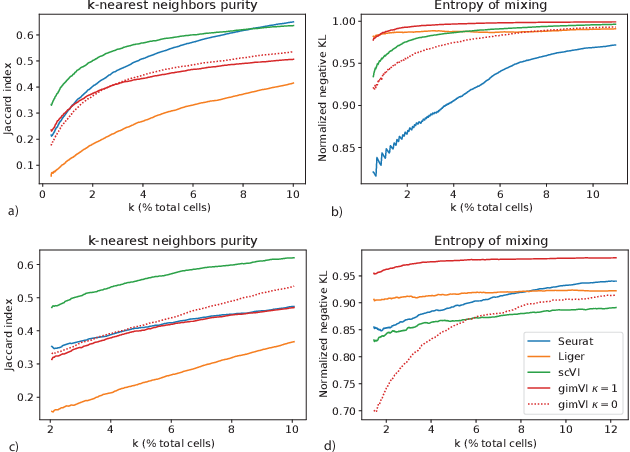 Spatial studies of transcriptome provide biologists with gene expression maps of heterogeneous and complex tissues. However, most experimental protocols for spatial transcriptomics suffer from the need to select beforehand a small fraction of genes to be quantified over the entire transcriptome. Standard single-cell RNA sequencing (scRNA-seq) is more prevalent, easier to implement and can in principle capture any gene but cannot recover the spatial location of the cells. In this manuscript, we focus on the problem of imputation of missing genes in spatial transcriptomic data based on (unpaired) standard scRNA-seq data from the same biological tissue. Building upon domain adaptation work, we propose gimVI, a deep generative model for the integration of spatial transcriptomic data and scRNA-seq data that can be used to impute missing genes. After describing our generative model and an inference procedure for it, we compare gimVI to alternative methods from computational biology or domain adaptation on real datasets and outperform Seurat Anchors, Liger and CORAL to impute held-out genes.


* submitted to the 2019 ICML Workshop on Computational Biology 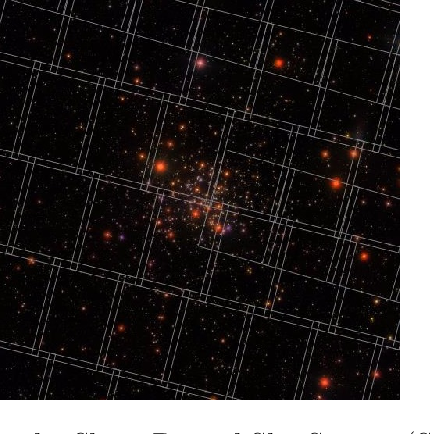 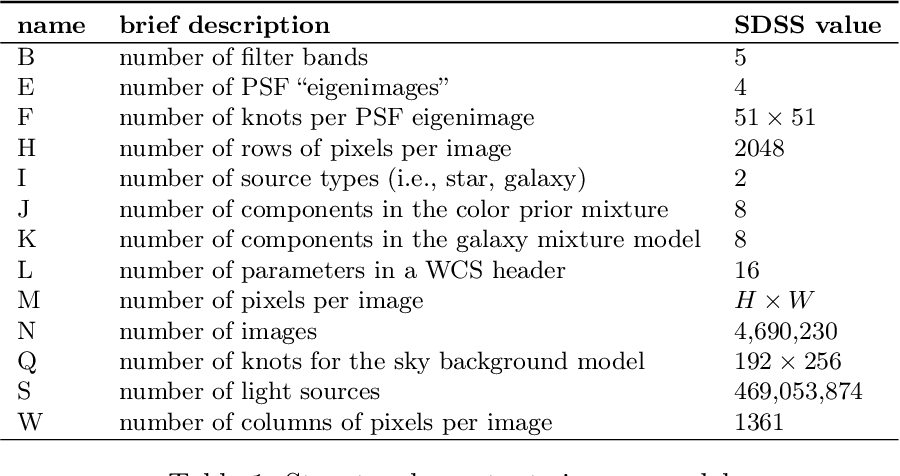 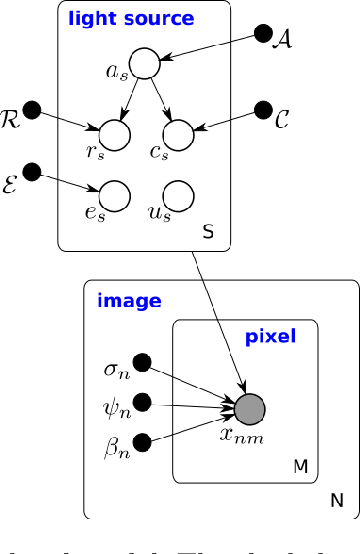 We present a new, fully generative model for constructing astronomical catalogs from optical telescope image sets. Each pixel intensity is treated as a Poisson random variable with a rate parameter that depends on the latent properties of stars and galaxies. These latent properties are themselves random, with prior distributions fitted by empirical Bayes. We compare two procedures for posterior inference. One procedure is based on Markov chain Monte Carlo (MCMC) while the other is based on variational inference (VI). We demonstrate that the MCMC procedure excels at quantifying uncertainty while the VI procedure is 1000x faster. For the error metric we consider, both procedures outperform the current state-of-the-art method for measuring the colors, shapes, and morphologies of stars and galaxies. On a supercomputer, the VI procedure efficiently uses 665,000 CPU cores (1.3 million hardware threads) to construct an astronomical catalog from 50 terabytes of images

Celeste: Variational inference for a generative model of astronomical images

We present a new, fully generative model of optical telescope image sets, along with a variational procedure for inference. Each pixel intensity is treated as a Poisson random variable, with a rate parameter dependent on latent properties of stars and galaxies. Key latent properties are themselves random, with scientific prior distributions constructed from large ancillary data sets. We check our approach on synthetic images. We also run it on images from a major sky survey, where it exceeds the performance of the current state-of-the-art method for locating celestial bodies and measuring their colors.