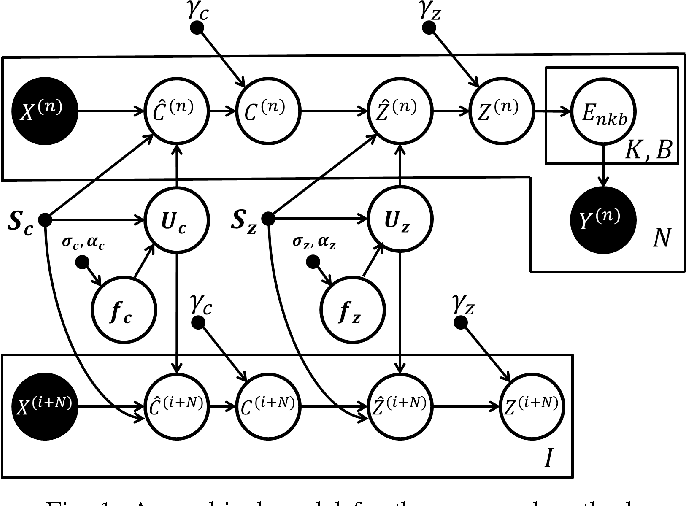 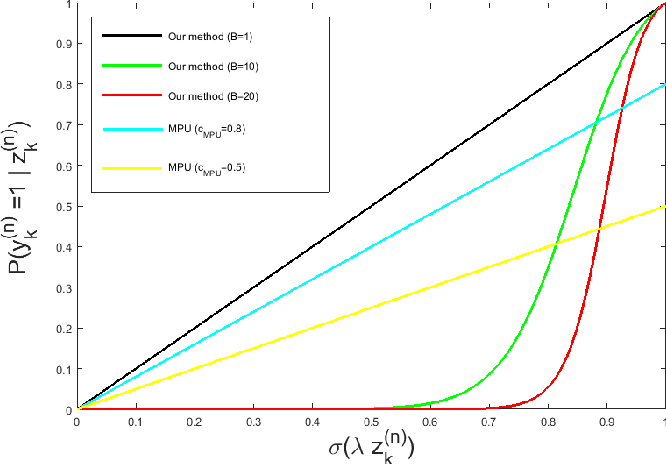 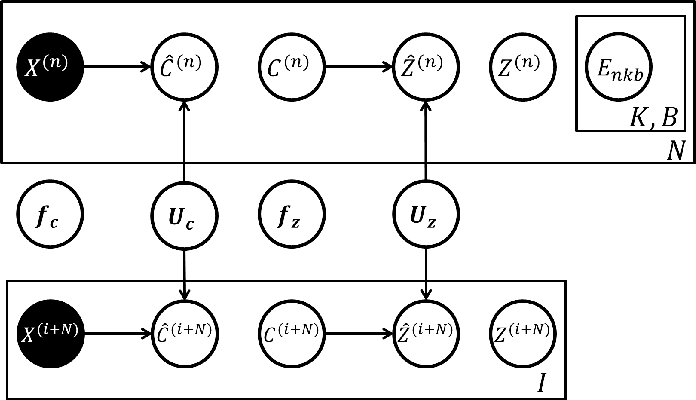 Multi-label classification has received considerable interest in recent years. Multi-label classifiers have to address many problems including: handling large-scale datasets with many instances and a large set of labels, compensating missing label assignments in the training set, considering correlations between labels, as well as exploiting unlabeled data to improve prediction performance. To tackle datasets with a large set of labels, embedding-based methods have been proposed which seek to represent the label assignments in a low-dimensional space. Many state-of-the-art embedding-based methods use a linear dimensionality reduction to represent the label assignments in a low-dimensional space. However, by doing so, these methods actually neglect the tail labels - labels that are infrequently assigned to instances. We propose an embedding-based method that non-linearly embeds the label vectors using an stochastic approach, thereby predicting the tail labels more accurately. Moreover, the proposed method have excellent mechanisms for handling missing labels, dealing with large-scale datasets, as well as exploiting unlabeled data. With the best of our knowledge, our proposed method is the first multi-label classifier that simultaneously addresses all of the mentioned challenges. Experiments on real-world datasets show that our method outperforms stateof-the-art multi-label classifiers by a large margin, in terms of prediction performance, as well as training time.

In some of object recognition problems, labeled data may not be available for all categories. Zero-shot learning utilizes auxiliary information (also called signatures) describing each category in order to find a classifier that can recognize samples from categories with no labeled instance. In this paper, we propose a novel semi-supervised zero-shot learning method that works on an embedding space corresponding to abstract deep visual features. We seek a linear transformation on signatures to map them onto the visual features, such that the mapped signatures of the seen classes are close to labeled samples of the corresponding classes and unlabeled data are also close to the mapped signatures of one of the unseen classes. We use the idea that the rich deep visual features provide a representation space in which samples of each class are usually condensed in a cluster. The effectiveness of the proposed method is demonstrated through extensive experiments on four public benchmarks improving the state-of-the-art prediction accuracy on three of them.

Although GAN-based methods have received many achievements in the last few years, they have not been such successful in generating discrete data. The most important challenge of these methods is the difficulty of passing the gradient from the discriminator to the generator when the generator outputs are discrete. Despite several attempts done to alleviate this problem, none of the existing GAN-based methods has improved the performance of text generation (using measures that evaluate both the quality and the diversity of generated samples) compared to a generative RNN that is simply trained by the maximum likelihood approach. In this paper, we propose a new framework for generating discrete data by an adversarial approach in which we do not need to pass the gradient to the generator. In the proposed method, the update of either the generator or the discriminator can be accomplished straightforwardly. Moreover, we leverage the discreteness of data to explicitly model the data distribution and ensure the normalization of the generated distribution and consequently the convergence properties of the proposed method. Experimental results generally show the superiority of the proposed DGSAN method compared to the other GAN-based approaches for generating discrete sequential data. 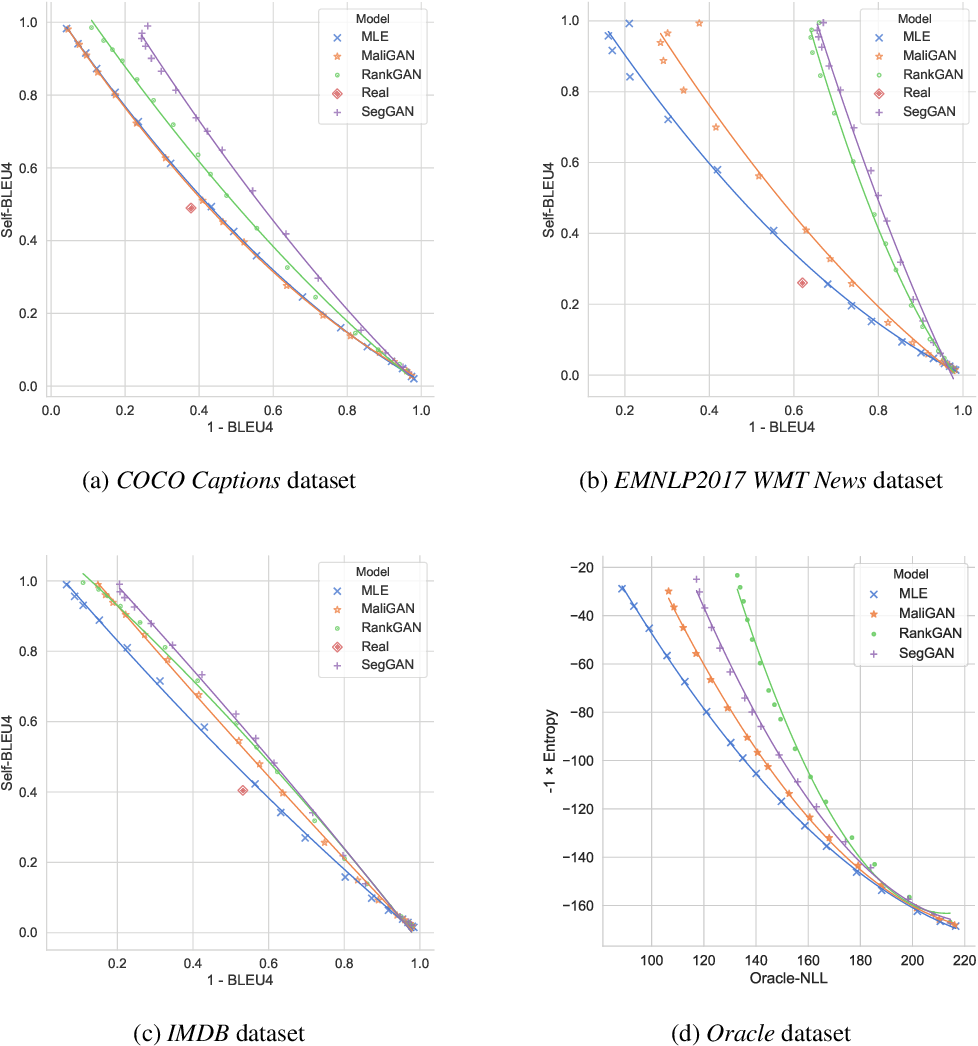 Text generation is an important Natural Language Processing task with various applications. Although several metrics have already been introduced to evaluate the text generation methods, each of them has its own shortcomings. The most widely used metrics such as BLEU only consider the quality of generated sentences and neglect their diversity. For example, repeatedly generation of only one high quality sentence would result in a high BLEU score. On the other hand, the more recent metric introduced to evaluate the diversity of generated texts known as Self-BLEU ignores the quality of generated texts. In this paper, we propose metrics to evaluate both the quality and diversity simultaneously by approximating the distance of the learned generative model and the real data distribution. For this purpose, we first introduce a metric that approximates this distance using n-gram based measures. Then, a feature-based measure which is based on a recent highly deep model trained on a large text corpus called BERT is introduced. Finally, for oracle training mode in which the generator's density can also be calculated, we propose to use the distance measures between the corresponding explicit distributions. Eventually, the most popular and recent text generation models are evaluated using both the existing and the proposed metrics and the preferences of the proposed metrics are determined.

Background: Lung cancer was known as primary cancers and the survival rate of cancer is about 15%. Early detection of lung cancer is the leading factor in survival rate. All symptoms (features) of lung cancer do not appear until the cancer spreads to other areas. It needs an accurate early detection of lung cancer, for increasing the survival rate. For accurate detection, it need characterizes efficient features and delete redundancy features among all features. Feature selection is the problem of selecting informative features among all features. Materials and Methods: Lung cancer database consist of 32 patient records with 57 features. This database collected by Hong and Youngand indexed in the University of California Irvine repository. Experimental contents include the extracted from the clinical data and X-ray data, etc. The data described 3 types of pathological lung cancers and all features are taking an integer value 0-3. In our study, new method is proposed for identify efficient features of lung cancer. It is based on Hyper-Heuristic. Results: We obtained an accuracy of 80.63% using reduced 11 feature set. The proposed method compare to the accuracy of 5 machine learning feature selections. The accuracy of these 5 methods are 60.94, 57.81, 68.75, 60.94 and 68.75. Conclusions: The proposed method has better performance with the highest level of accuracy. Therefore, the proposed model is recommended for identifying an efficient symptom of Disease. These finding are very important in health research, particularly in allocation of medical resources for patients who predicted as high-risks

By Emerging huge databases and the need to efficient learning algorithms on these datasets, new problems have appeared and some methods have been proposed to solve these problems by selecting efficient features. Feature selection is a problem of finding efficient features among all features in which the final feature set can improve accuracy and reduce complexity. One way to solve this problem is to evaluate all possible feature subsets. However, evaluating all possible feature subsets is an exhaustive search and thus it has high computational complexity. Until now many heuristic algorithms have been studied for solving this problem. Hyper-heuristic is a new heuristic approach which can search the solution space effectively by applying local searches appropriately. Each local search is a neighborhood searching algorithm. Since each region of the solution space can have its own characteristics, it should be chosen an appropriate local search and apply it to current solution. This task is tackled to a supervisor. The supervisor chooses a local search based on the functional history of local searches. By doing this task, it can trade of between exploitation and exploration. Since the existing heuristic cannot trade of between exploration and exploitation appropriately, the solution space has not been searched appropriately in these methods and thus they have low convergence rate. For the first time, in this paper use a hyper-heuristic approach to find an efficient feature subset. In the proposed method, genetic algorithm is used as a supervisor and 16 heuristic algorithms are used as local searches. Empirical study of the proposed method on several commonly used data sets from UCI data sets indicates that it outperforms recent existing methods in the literature for feature selection. 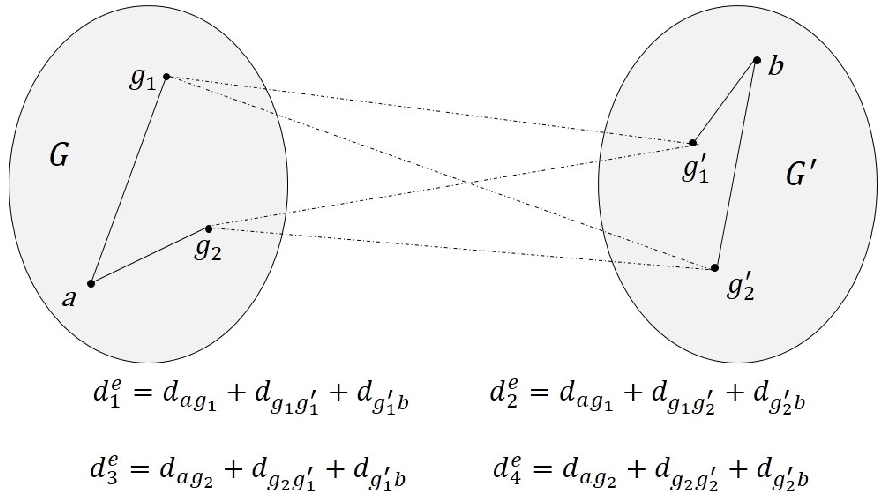 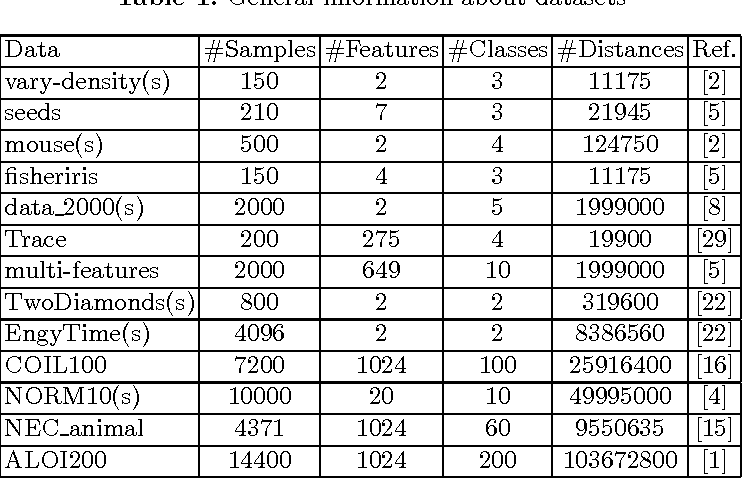 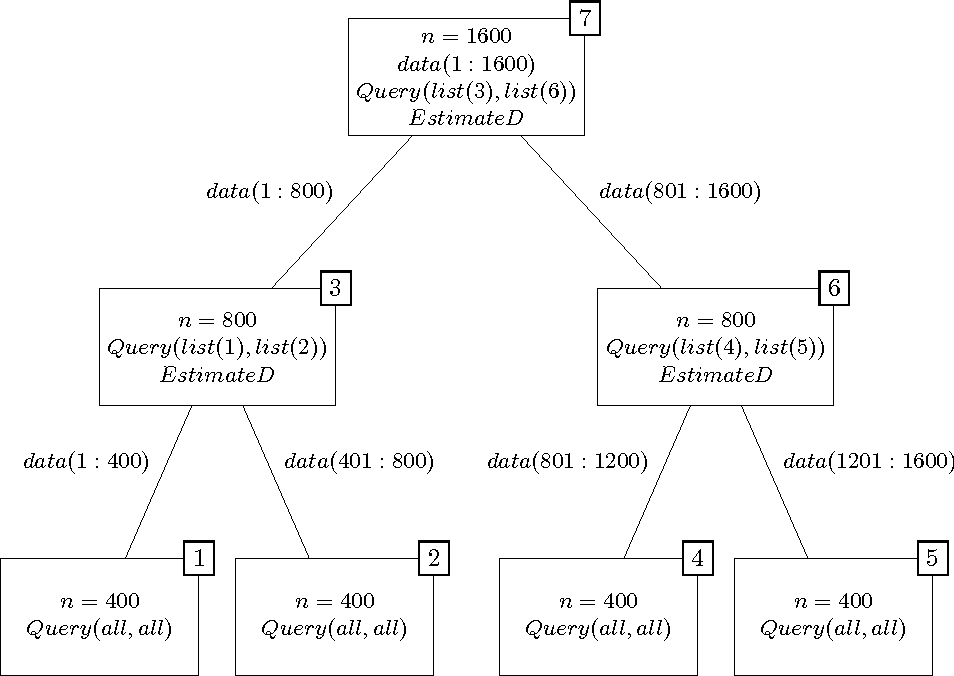 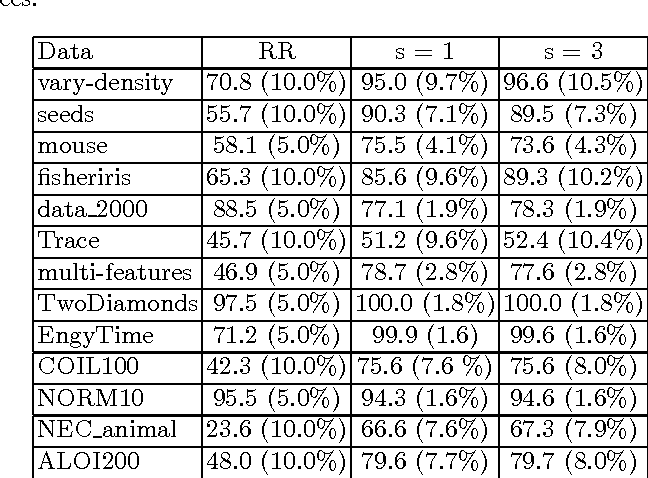 k-medoids algorithm is a partitional, centroid-based clustering algorithm which uses pairwise distances of data points and tries to directly decompose the dataset with $n$ points into a set of $k$ disjoint clusters. However, k-medoids itself requires all distances between data points that are not so easy to get in many applications. In this paper, we introduce a new method which requires only a small proportion of the whole set of distances and makes an effort to estimate an upper-bound for unknown distances using the inquired ones. This algorithm makes use of the triangle inequality to calculate an upper-bound estimation of the unknown distances. Our method is built upon a recursive approach to cluster objects and to choose some points actively from each bunch of data and acquire the distances between these prominent points from oracle. Experimental results show that the proposed method using only a small subset of the distances can find proper clustering on many real-world and synthetic datasets. 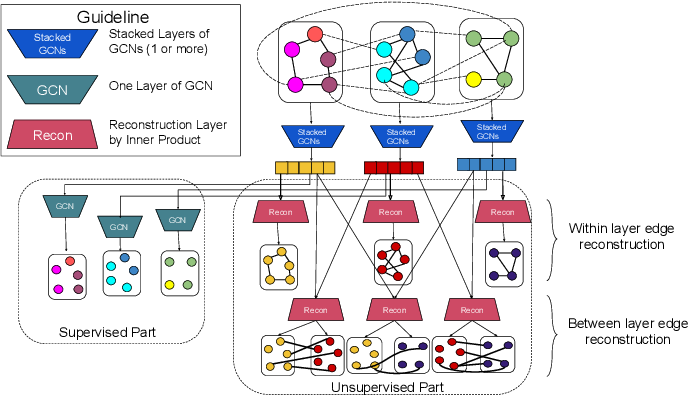 Recently, graph embedding emerges as an effective approach for graph analysis tasks such as node classification and link prediction. The goal of network embedding is to find low dimensional representation of graph nodes that preserves the graph structure. Since there might be signals on nodes as features, recent methods like Graph Convolutional Networks (GCNs) try to consider node signals besides the node relations. On the other hand, multi-layered graph analysis has been received much attention. However, the recent methods for node embedding have not been explored in these networks. In this paper, we study the problem of node embedding in multi-layered graphs and propose a deep method that embeds nodes using both relations (connections within and between layers of the graph) and nodes signals. We evaluate our method on node classification tasks. Experimental results demonstrate the superiority of the proposed method to other multi-layered and single-layered competitors and also proves the effect of using cross-layer edges. 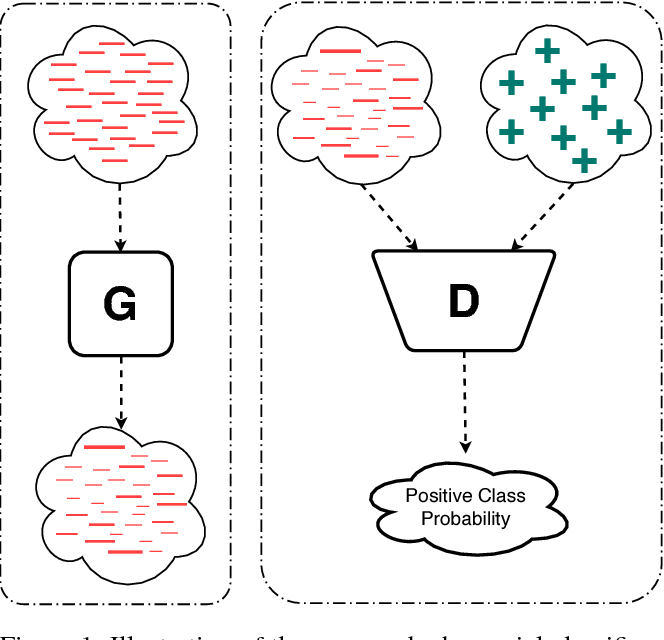 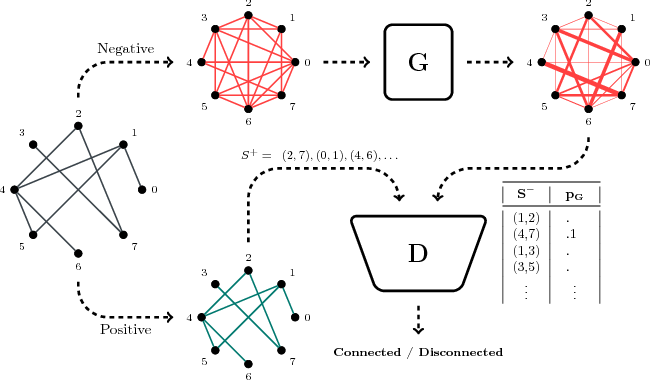 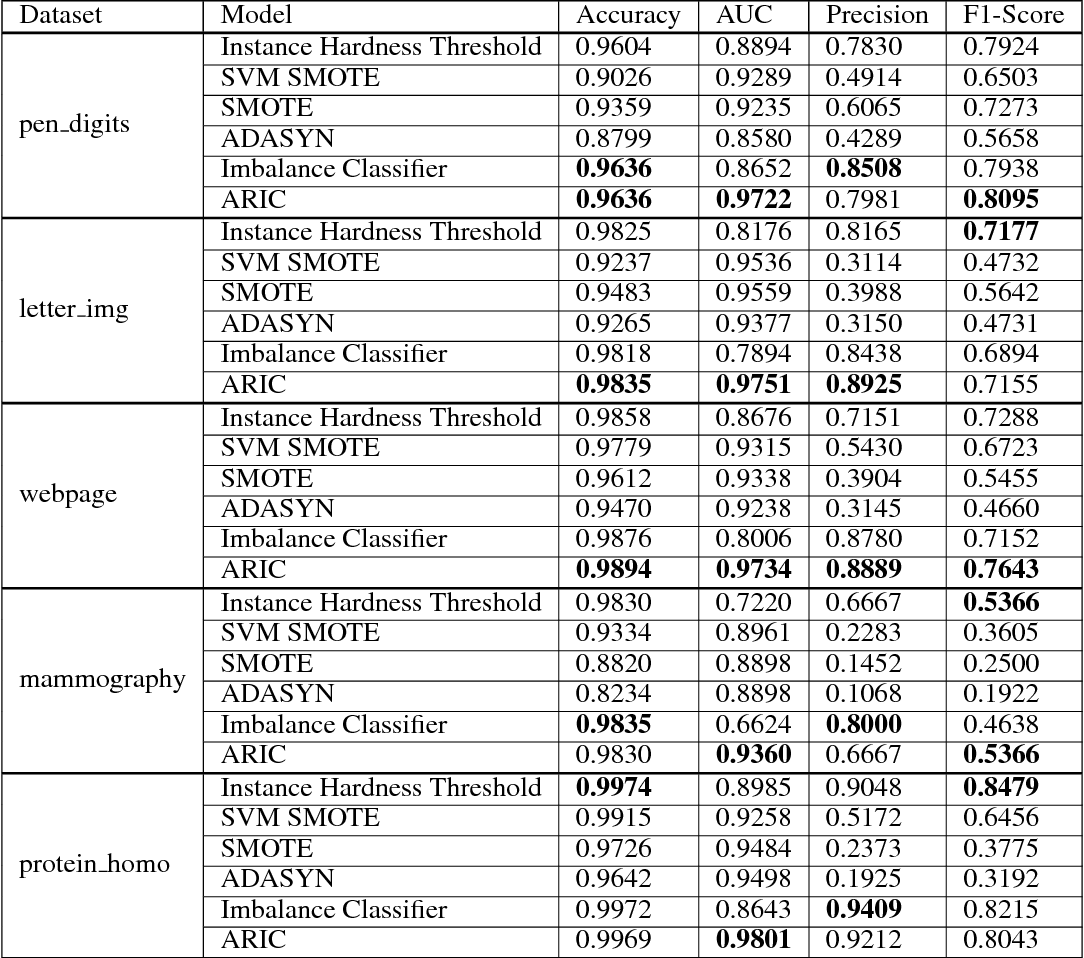 Adversarial approach has been widely used for data generation in the last few years. However, this approach has not been extensively utilized for classifier training. In this paper, we propose an adversarial framework for classifier training that can also handle imbalanced data. Indeed, a network is trained via an adversarial approach to give weights to samples of the majority class such that the obtained classification problem becomes more challenging for the discriminator and thus boosts its classification capability. In addition to the general imbalanced classification problems, the proposed method can also be used for problems such as graph representation learning in which it is desired to discriminate similar nodes from dissimilar nodes. Experimental results on imbalanced data classification and on the tasks like graph link prediction show the superiority of the proposed method compared to the state-of-the-art methods.