Models, code, and papers for "Masoom A": 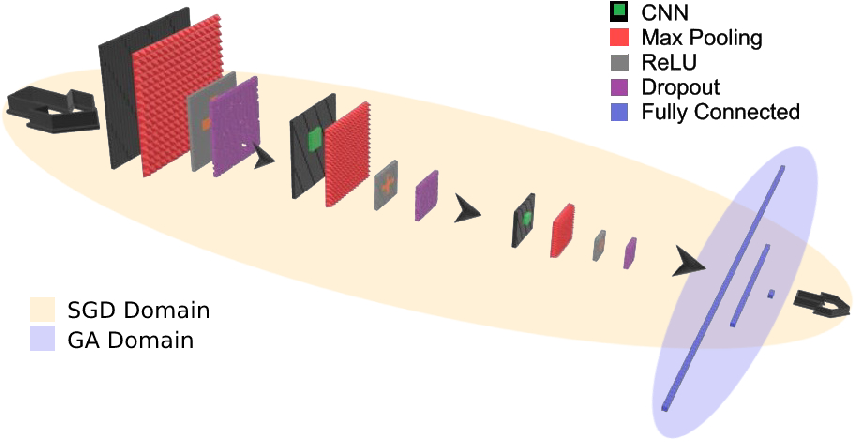 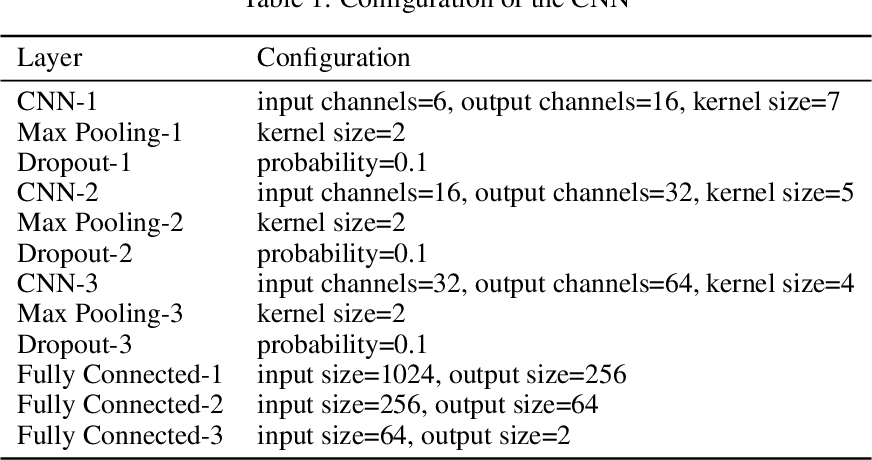 Convolutional Neural Networks (CNNs) have been used for automated detection of prostate cancer where Area Under Receiver Operating Characteristic (ROC) curve (AUC) is usually used as the performance metric. Given that AUC is not differentiable, common practice is to train the CNN using a loss functions based on other performance metrics such as cross entropy and monitoring AUC to select the best model. In this work, we propose to fine-tune a trained CNN for prostate cancer detection using a Genetic Algorithm to achieve a higher AUC. Our dataset contained 6-channel Diffusion-Weighted MRI slices of prostate. On a cohort of 2,955 training, 1,417 validation, and 1,334 test slices, we reached test AUC of 0.773; a 9.3% improvement compared to the base CNN model. 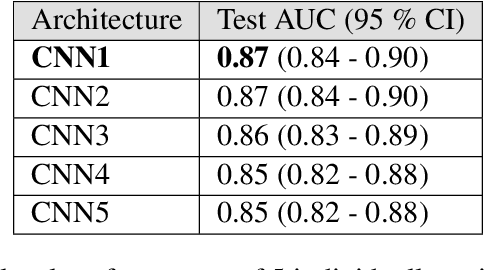 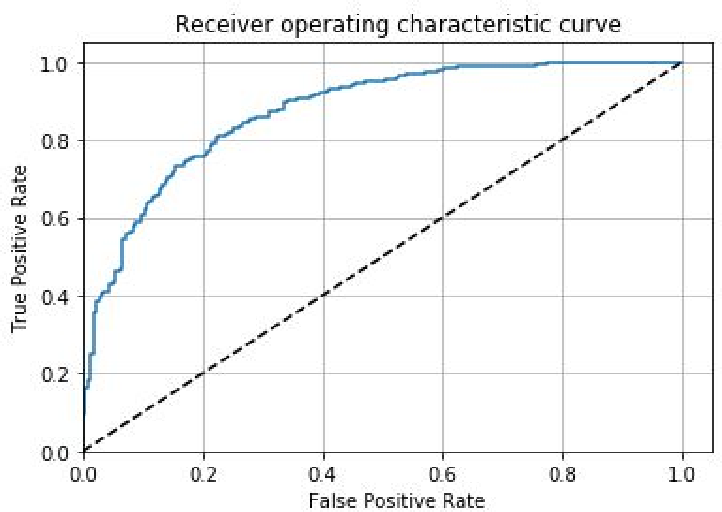 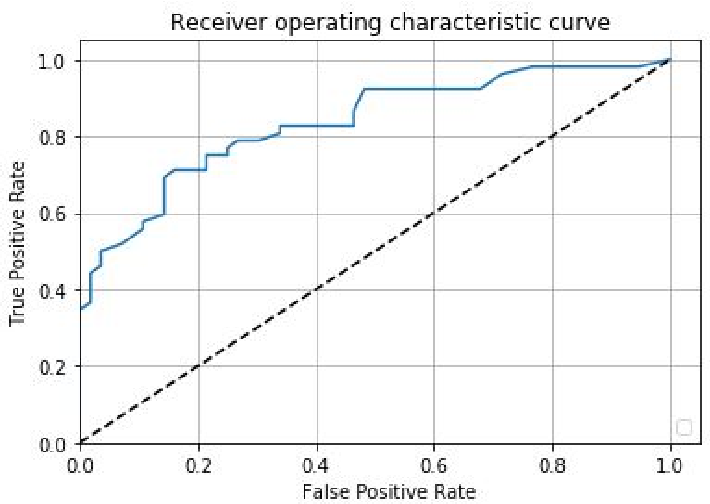 Prostate cancer is one of the most common forms of cancer and the third leading cause of cancer death in North America. As an integrated part of computer-aided detection (CAD) tools, diffusion-weighted magnetic resonance imaging (DWI) has been intensively studied for accurate detection of prostate cancer. With deep convolutional neural networks (CNNs) significant success in computer vision tasks such as object detection and segmentation, different CNNs architectures are increasingly investigated in medical imaging research community as promising solutions for designing more accurate CAD tools for cancer detection. In this work, we developed and implemented an automated CNNs-based pipeline for detection of clinically significant prostate cancer (PCa) for a given axial DWI image and for each patient. DWI images of 427 patients were used as the dataset, which contained 175 patients with PCa and 252 healthy patients. To measure the performance of the proposed pipeline, a test set of 108 (out of 427) patients were set aside and not used in the training phase. The proposed pipeline achieved area under the receiver operating characteristic curve (AUC) of 0.87 (95% Confidence Interval (CI): 0.84-0.90) and 0.84 (95% CI: 0.76-0.91) at slice level and patient level, respectively. 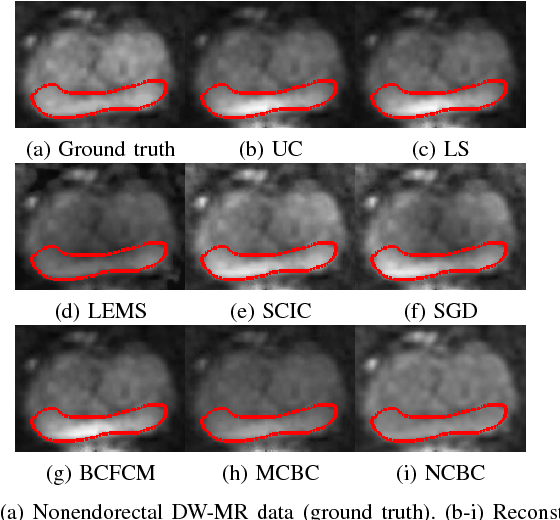 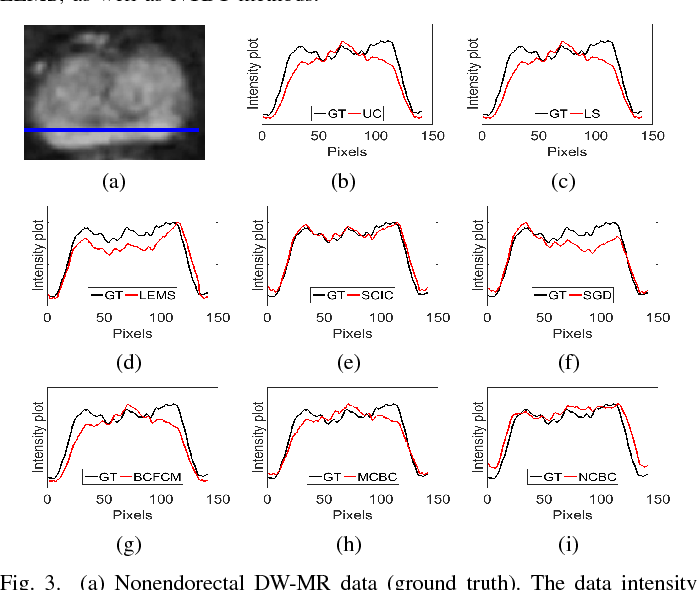 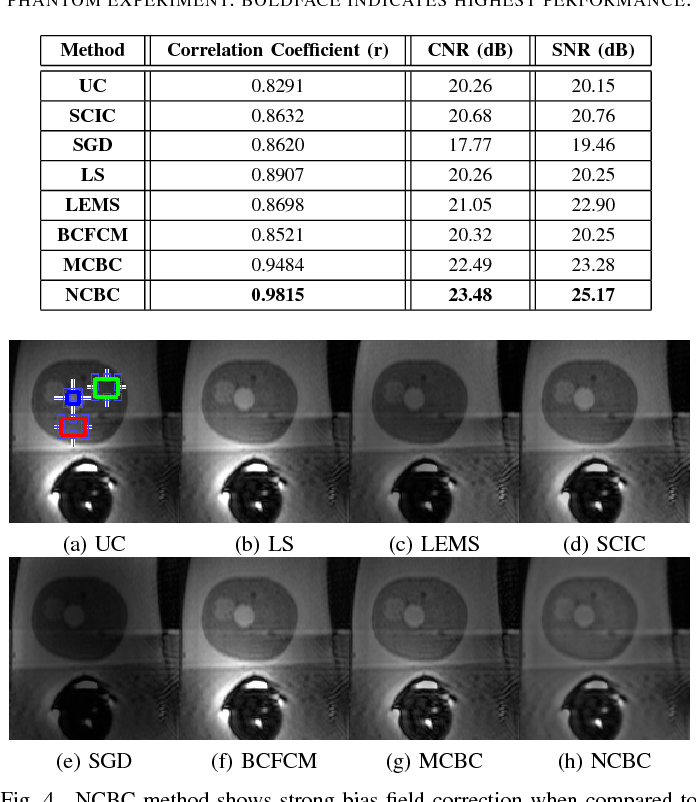 Diffusion weighted magnetic resonance imaging (DW-MR) is a powerful tool in imaging-based prostate cancer screening and detection. Endorectal coils are commonly used in DW-MR imaging to improve the signal-to-noise ratio (SNR) of the acquisition, at the expense of significant intensity inhomogeneities (bias field) that worsens as we move away from the endorectal coil. The presence of bias field can have a significant negative impact on the accuracy of different image analysis tasks, as well as prostate tumor localization, thus leading to increased inter- and intra-observer variability. Retrospective bias correction approaches are introduced as a more efficient way of bias correction compared to the prospective methods such that they correct for both of the scanner and anatomy-related bias fields in MR imaging. Previously proposed retrospective bias field correction methods suffer from undesired noise amplification that can reduce the quality of bias-corrected DW-MR image. Here, we propose a unified data reconstruction approach that enables joint compensation of bias field as well as data noise in DW-MR imaging. The proposed noise-compensated, bias-corrected (NCBC) data reconstruction method takes advantage of a novel stochastically fully connected joint conditional random field (SFC-JCRF) model to mitigate the effects of data noise and bias field in the reconstructed MR data. The proposed NCBC reconstruction method was tested on synthetic DW-MR data, physical DW-phantom as well as real DW-MR data all acquired using endorectal MR coil. Both qualitative and quantitative analysis illustrated that the proposed NCBC method can achieve improved image quality when compared to other tested bias correction methods. As such, the proposed NCBC method may have potential as a useful retrospective approach for improving the consistency of image interpretations. 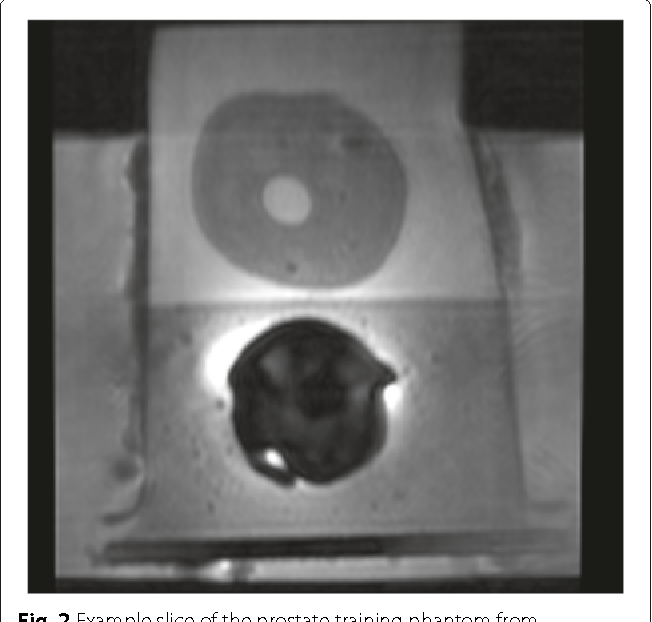 Magnetic Resonance Imaging (MRI) is a crucial medical imaging technology for the screening and diagnosis of frequently occurring cancers. However image quality may suffer by long acquisition times for MRIs due to patient motion, as well as result in great patient discomfort. Reducing MRI acquisition time can reduce patient discomfort and as a result reduces motion artifacts from the acquisition process. Compressive sensing strategies, when applied to MRI, have been demonstrated to be effective at decreasing acquisition times significantly by sparsely sampling the \emph{k}-space during the acquisition process. However, such a strategy requires advanced reconstruction algorithms to produce high quality and reliable images from compressive sensing MRI. This paper proposes a new reconstruction approach based on cross-domain stochastically fully connected conditional random fields (CD-SFCRF) for compressive sensing MRI. The CD-SFCRF introduces constraints in both \emph{k}-space and spatial domains within a stochastically fully connected graphical model to produce improved MRI reconstruction. Experimental results using T2-weighted (T2w) imaging and diffusion-weighted imaging (DWI) of the prostate show strong performance in preserving fine details and tissue structures in the reconstructed images when compared to other tested methods even at low sampling rates. 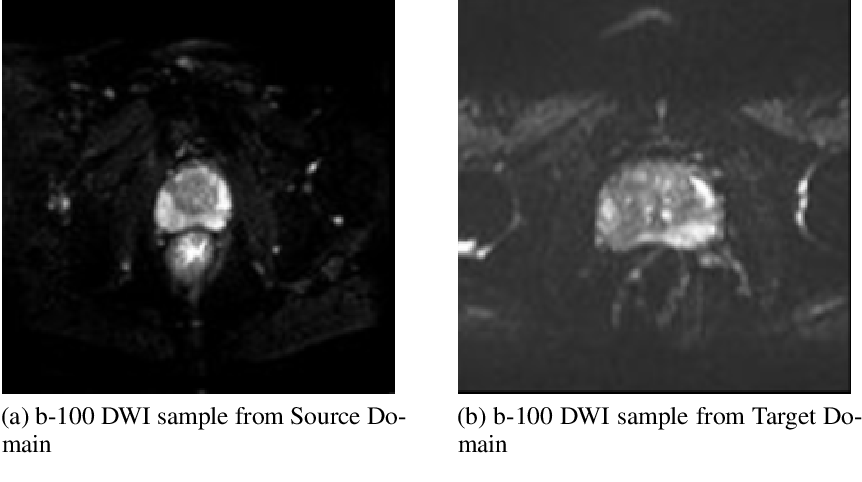 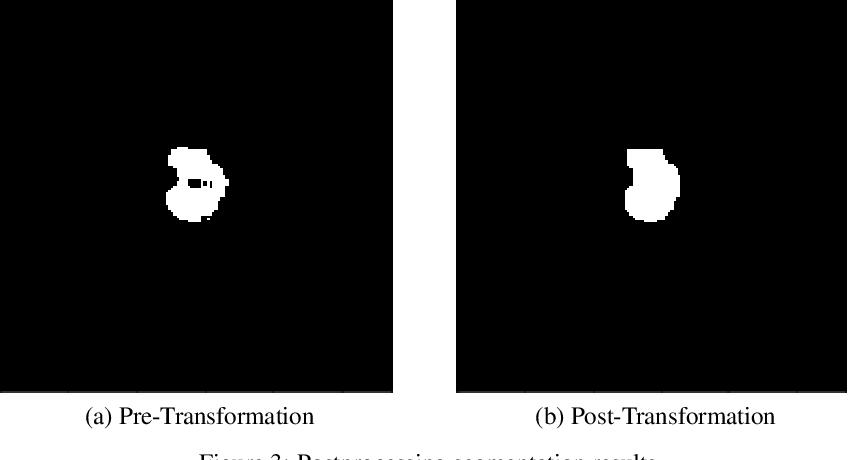 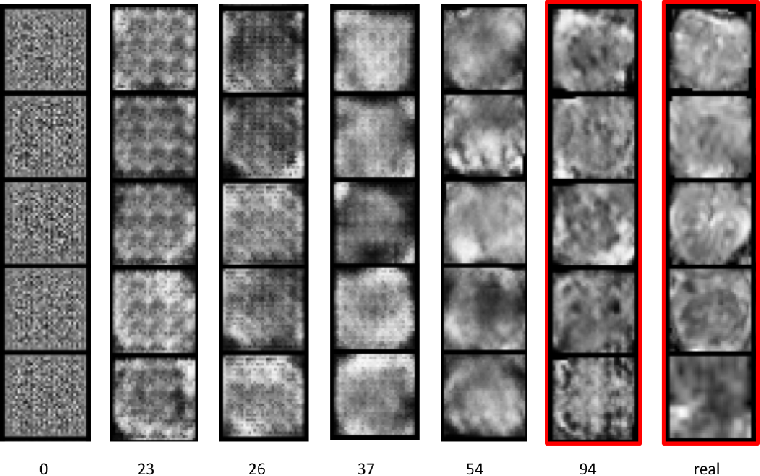 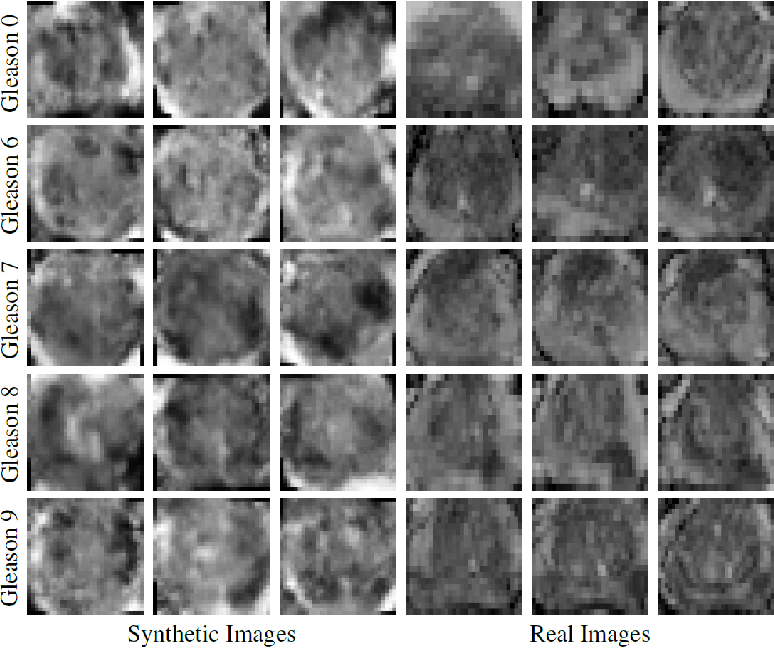 Generative Adversarial Networks (GANs) have shown considerable promise for mitigating the challenge of data scarcity when building machine learning-driven analysis algorithms. Specifically, a number of studies have shown that GAN-based image synthesis for data augmentation can aid in improving classification accuracy in a number of medical image analysis tasks, such as brain and liver image analysis. However, the efficacy of leveraging GANs for tackling prostate cancer analysis has not been previously explored. Motivated by this, in this study we introduce ProstateGAN, a GAN-based model for synthesizing realistic prostate diffusion imaging data. More specifically, in order to generate new diffusion imaging data corresponding to a particular cancer grade (Gleason score), we propose a conditional deep convolutional GAN architecture that takes Gleason scores into consideration during the training process. Experimental results show that high-quality synthetic prostate diffusion imaging data can be generated using the proposed ProstateGAN for specified Gleason scores. 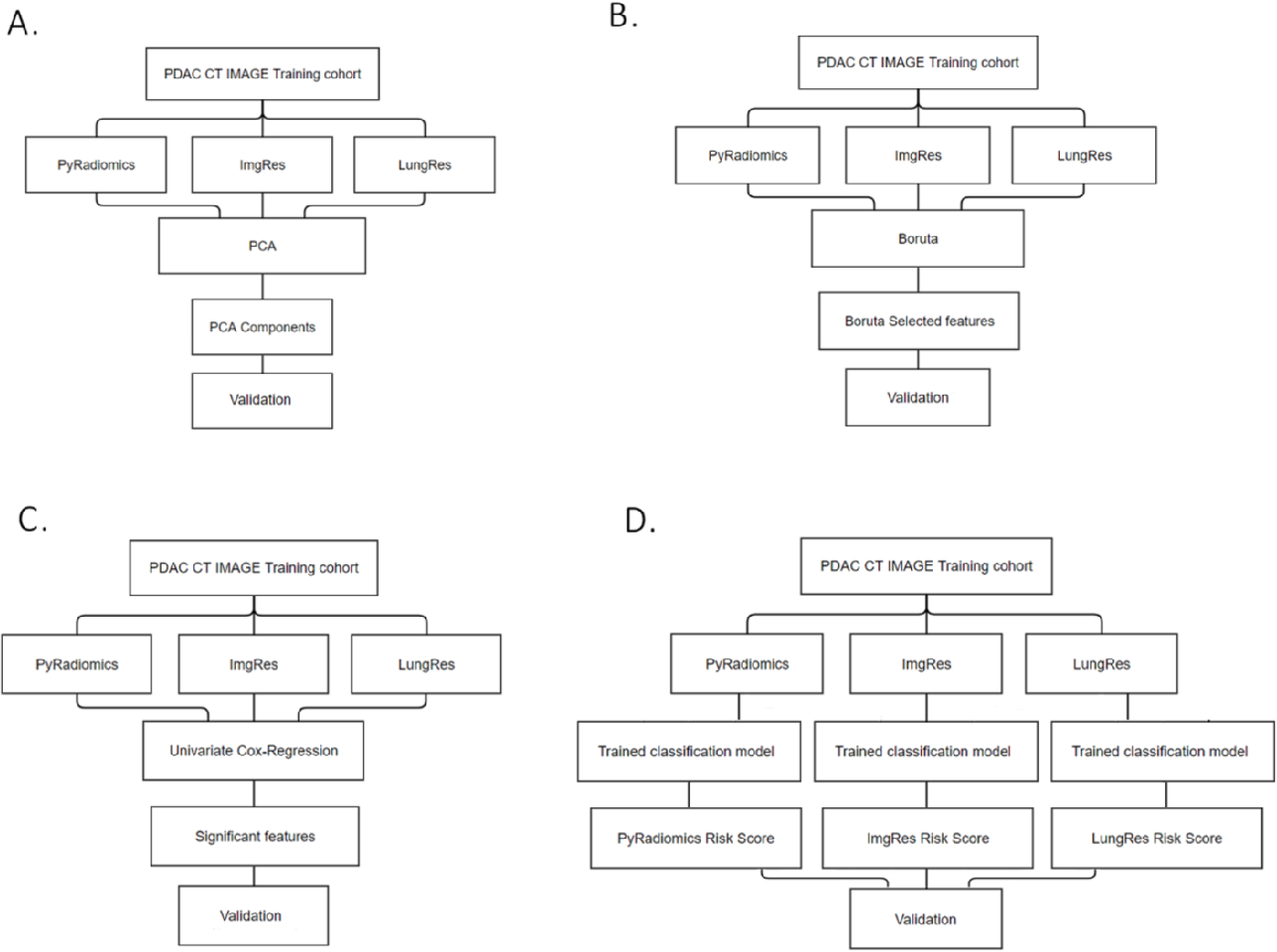 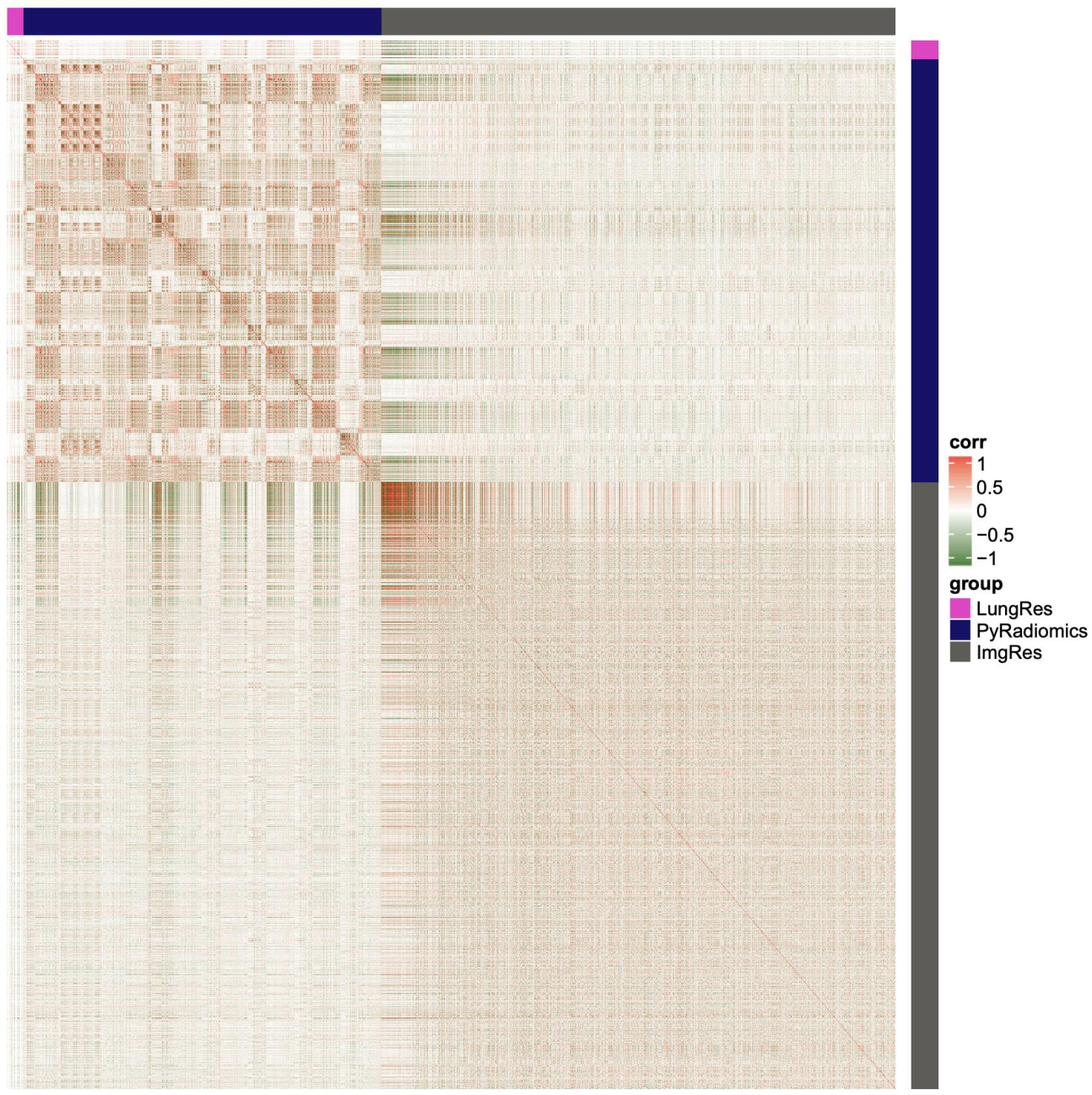 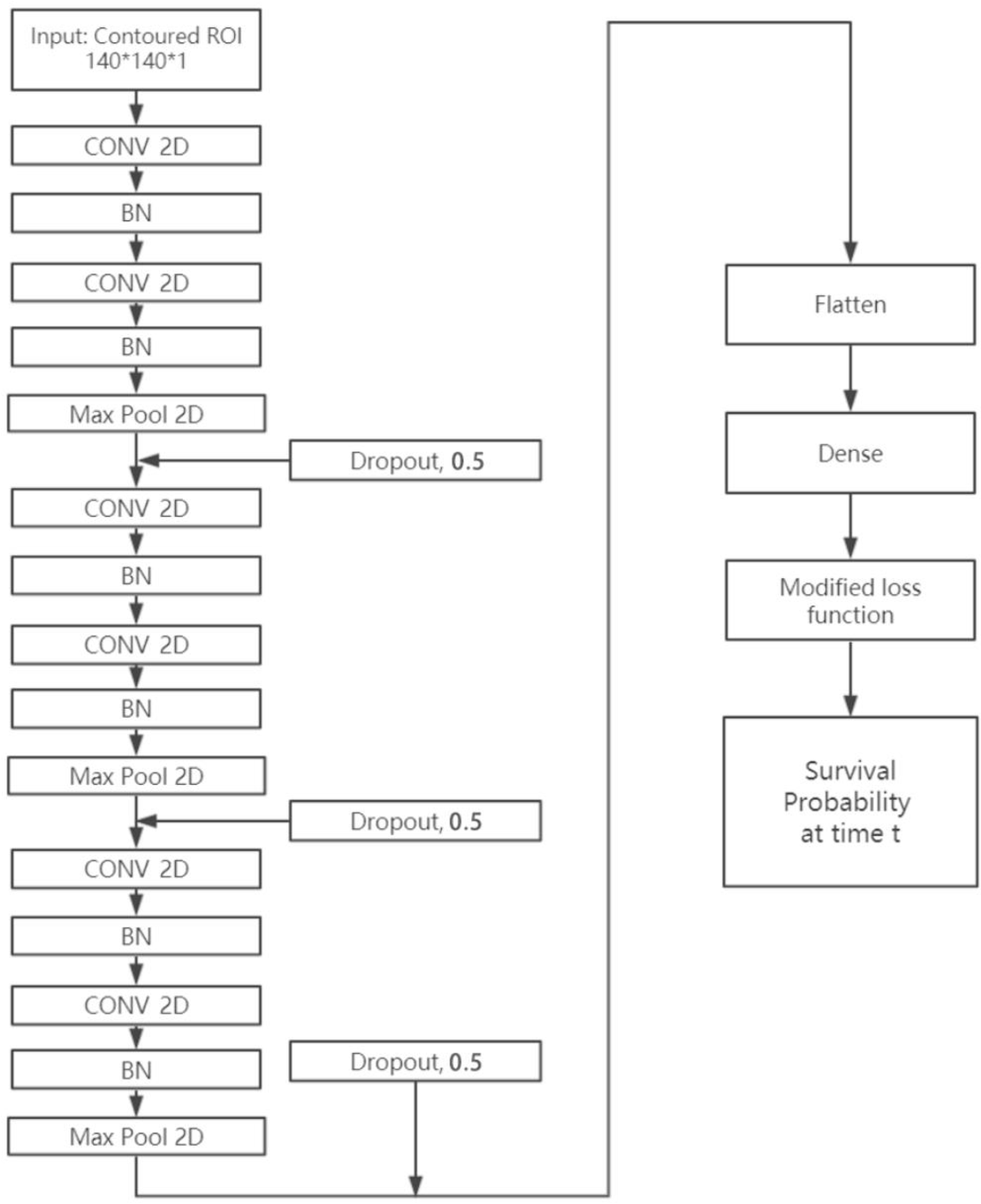 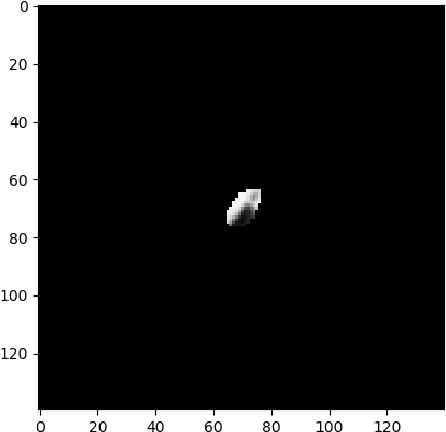 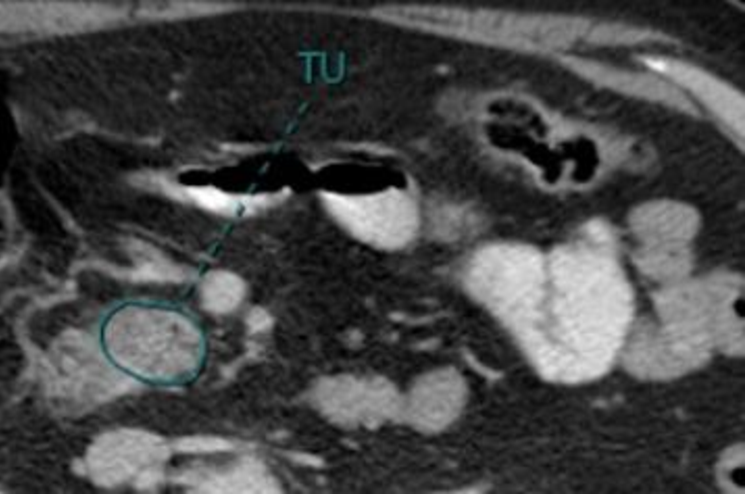 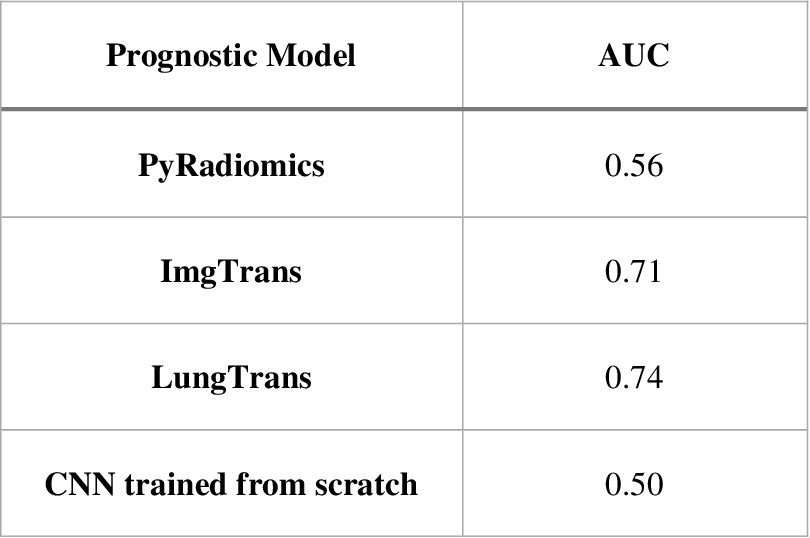 Pancreatic ductal adenocarcinoma (PDAC) is one of the most aggressive cancers with an extremely poor prognosis. Radiomics has shown prognostic ability in multiple types of cancer including PDAC. However, the prognostic value of traditional radiomics pipelines, which are based on hand-crafted radiomic features alone, is limited due to multicollinearity of features and multiple testing problem, and limited performance of conventional machine learning classifiers. Deep learning architectures, such as convolutional neural networks (CNNs), have been shown to outperform traditional techniques in computer vision tasks, such as object detection. However, they require large sample sizes for training which limits their development. As an alternative solution, CNN-based transfer learning has shown the potential for achieving reasonable performance using datasets with small sample sizes. In this work, we developed a CNN-based transfer learning approach for prognostication in PDAC patients for overall survival. The results showed that transfer learning approach outperformed the traditional radiomics model on PDAC data. A transfer learning approach may fill the gap between radiomics and deep learning analytics for cancer prognosis and improve performance beyond what CNNs can achieve using small datasets. 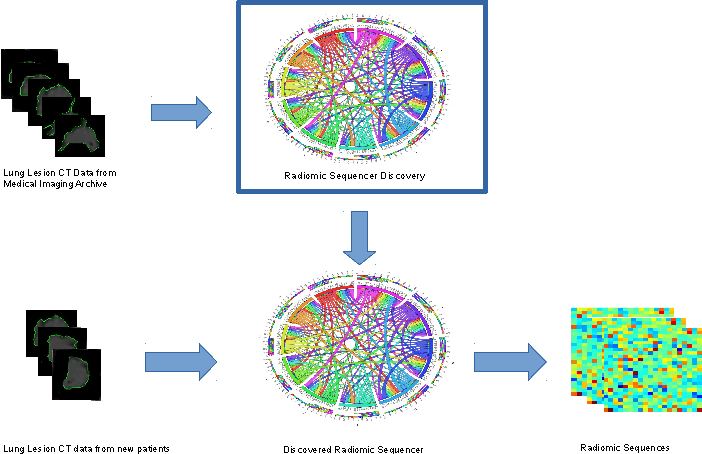 Lung cancer is the leading cause for cancer related deaths. As such, there is an urgent need for a streamlined process that can allow radiologists to provide diagnosis with greater efficiency and accuracy. A powerful tool to do this is radiomics: a high-dimension imaging feature set. In this study, we take the idea of radiomics one step further by introducing the concept of discovery radiomics for lung cancer prediction using CT imaging data. In this study, we realize these custom radiomic sequencers as deep convolutional sequencers using a deep convolutional neural network learning architecture. To illustrate the prognostic power and effectiveness of the radiomic sequences produced by the discovered sequencer, we perform cancer prediction between malignant and benign lesions from 97 patients using the pathologically-proven diagnostic data from the LIDC-IDRI dataset. Using the clinically provided pathologically-proven data as ground truth, the proposed framework provided an average accuracy of 77.52% via 10-fold cross-validation with a sensitivity of 79.06% and specificity of 76.11%, surpassing the state-of-the art method.

Radiomics has proven to be a powerful prognostic tool for cancer detection, and has previously been applied in lung, breast, prostate, and head-and-neck cancer studies with great success. However, these radiomics-driven methods rely on pre-defined, hand-crafted radiomic feature sets that can limit their ability to characterize unique cancer traits. In this study, we introduce a novel discovery radiomics framework where we directly discover custom radiomic features from the wealth of available medical imaging data. In particular, we leverage novel StochasticNet radiomic sequencers for extracting custom radiomic features tailored for characterizing unique cancer tissue phenotype. Using StochasticNet radiomic sequencers discovered using a wealth of lung CT data, we perform binary classification on 42,340 lung lesions obtained from the CT scans of 93 patients in the LIDC-IDRI dataset. Preliminary results show significant improvement over previous state-of-the-art methods, indicating the potential of the proposed discovery radiomics framework for improving cancer screening and diagnosis. 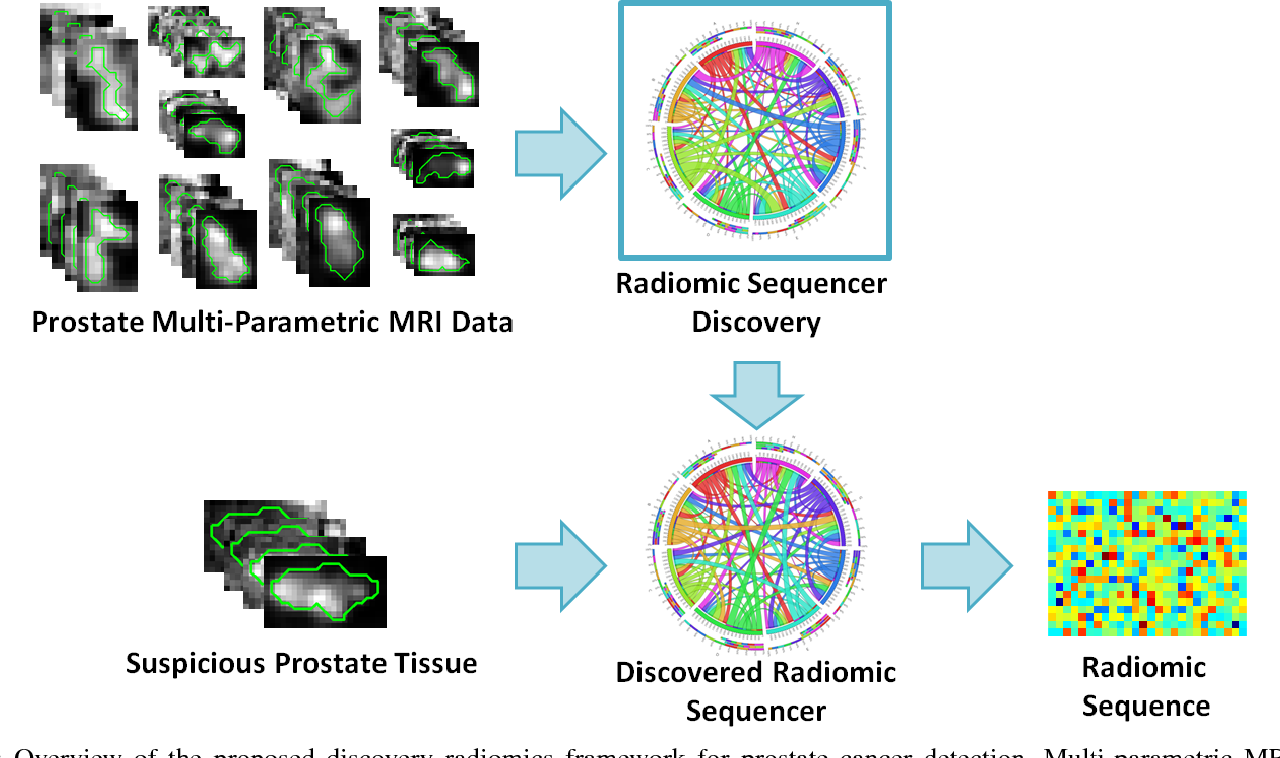 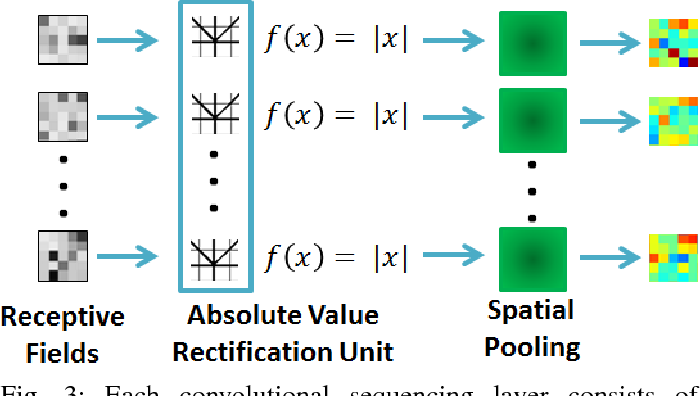