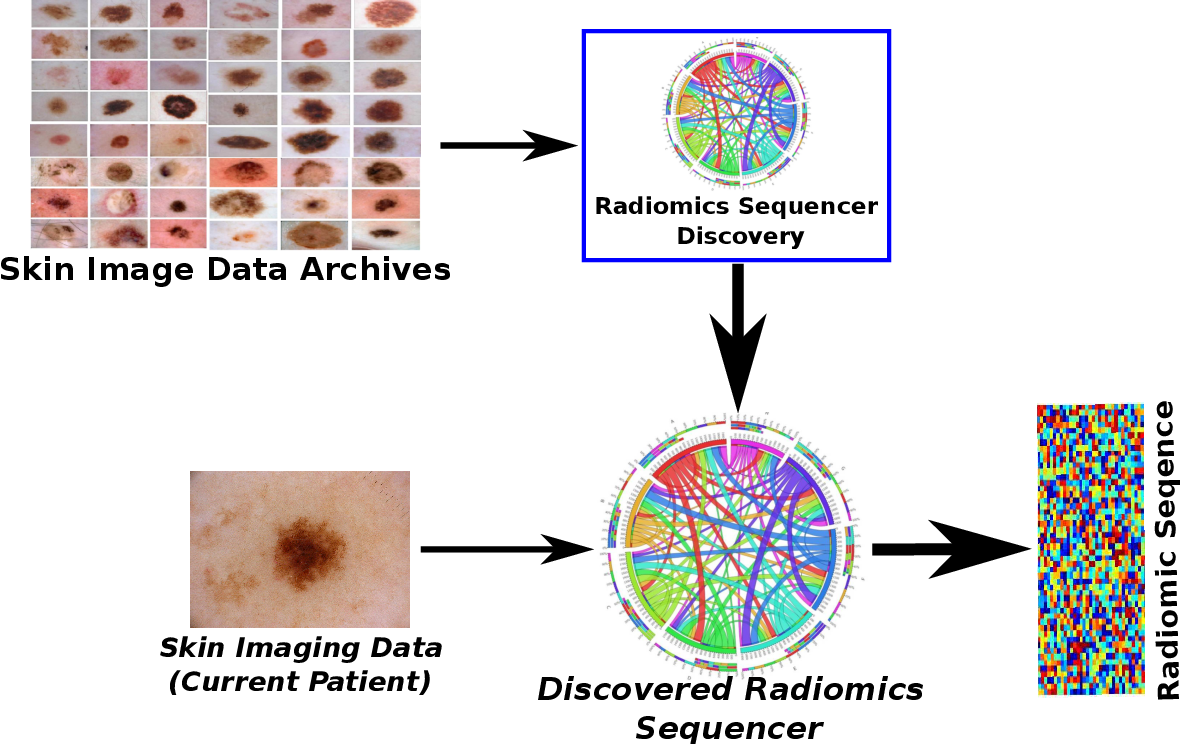 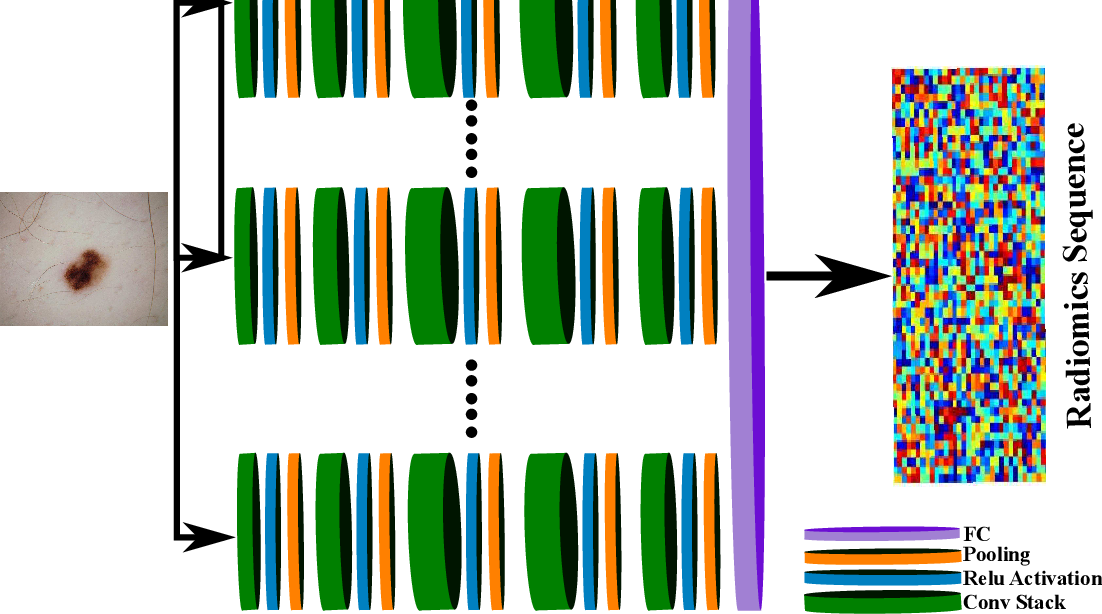 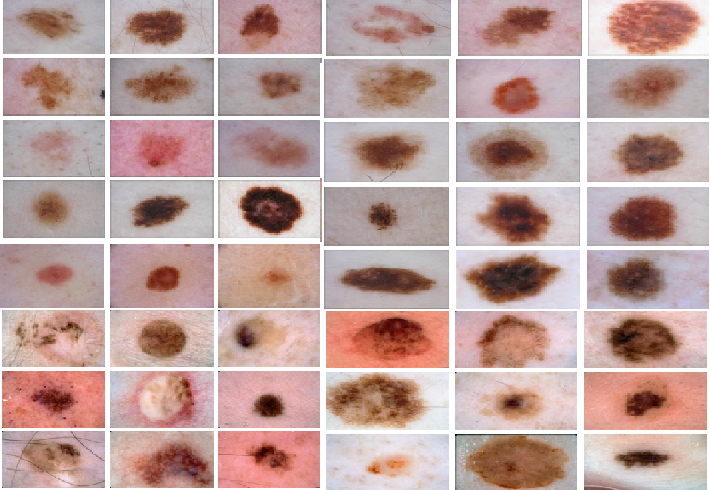 While skin cancer is the most diagnosed form of cancer in men and women, with more cases diagnosed each year than all other cancers combined, sufficiently early diagnosis results in very good prognosis and as such makes early detection crucial. While radiomics have shown considerable promise as a powerful diagnostic tool for significantly improving oncological diagnostic accuracy and efficiency, current radiomics-driven methods have largely rely on pre-defined, hand-crafted quantitative features, which can greatly limit the ability to fully characterize unique cancer phenotype that distinguish it from healthy tissue. Recently, the notion of discovery radiomics was introduced, where a large amount of custom, quantitative radiomic features are directly discovered from the wealth of readily available medical imaging data. In this study, we present a novel discovery radiomics framework for skin cancer detection, where we leverage novel deep multi-column radiomic sequencers for high-throughput discovery and extraction of a large amount of custom radiomic features tailored for characterizing unique skin cancer tissue phenotype. The discovered radiomic sequencer was tested against 9,152 biopsy-proven clinical images comprising of different skin cancers such as melanoma and basal cell carcinoma, and demonstrated sensitivity and specificity of 91% and 75%, respectively, thus achieving dermatologist-level performance and \break hence can be a powerful tool for assisting general practitioners and dermatologists alike in improving the efficiency, consistency, and accuracy of skin cancer diagnosis. 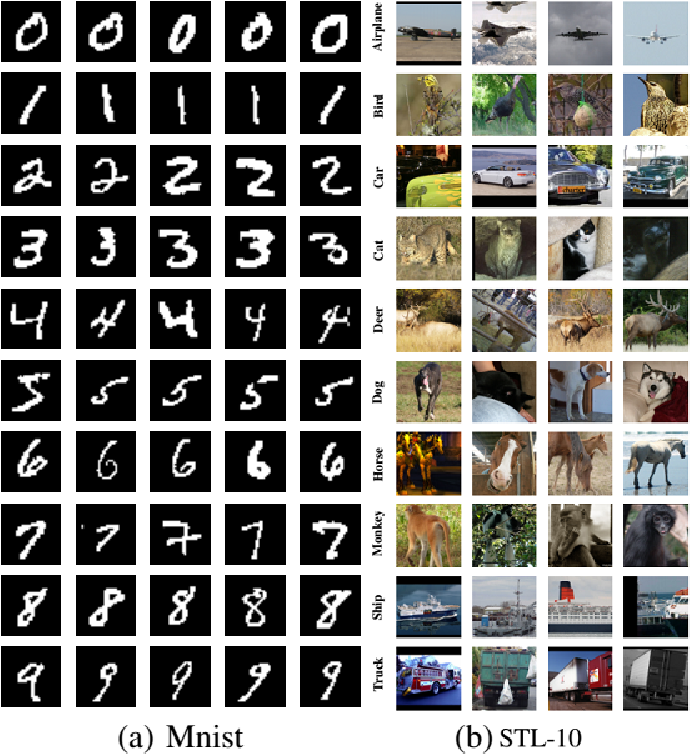 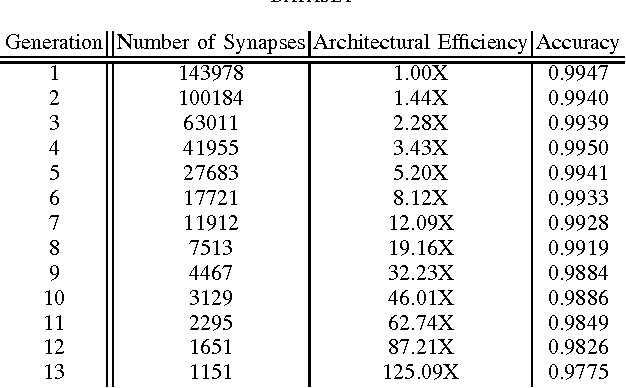 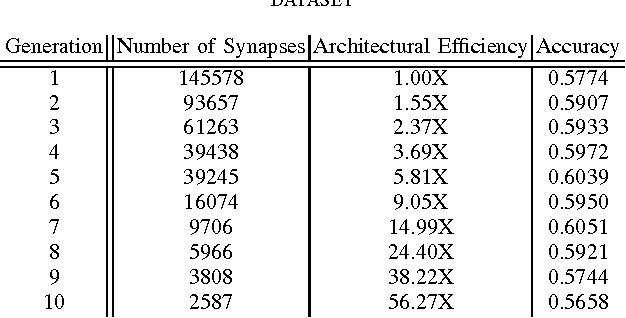 There has been significant recent interest towards achieving highly efficient deep neural network architectures. A promising paradigm for achieving this is the concept of evolutionary deep intelligence, which attempts to mimic biological evolution processes to synthesize highly-efficient deep neural networks over successive generations. An important aspect of evolutionary deep intelligence is the genetic encoding scheme used to mimic heredity, which can have a significant impact on the quality of offspring deep neural networks. Motivated by the neurobiological phenomenon of synaptic clustering, we introduce a new genetic encoding scheme where synaptic probability is driven towards the formation of a highly sparse set of synaptic clusters. Experimental results for the task of image classification demonstrated that the synthesized offspring networks using this synaptic cluster-driven genetic encoding scheme can achieve state-of-the-art performance while having network architectures that are not only significantly more efficient (with a ~125-fold decrease in synapses for MNIST) compared to the original ancestor network, but also tailored for GPU-accelerated machine learning applications. 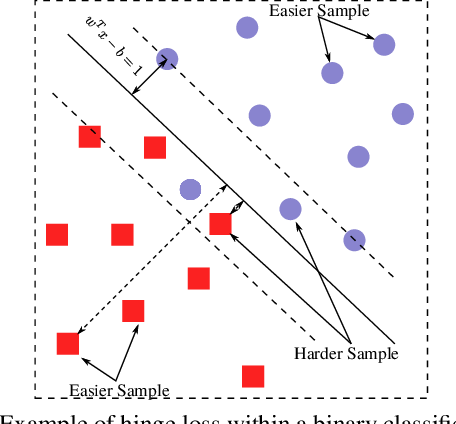 The current trade-off between depth and computational cost makes it difficult to adopt deep neural networks for many industrial applications, especially when computing power is limited. Here, we are inspired by the idea that, while deeper embeddings are needed to discriminate difficult samples, a large number of samples can be well discriminated via much shallower embeddings. In this study, we introduce the concept of decision gates (d-gate), modules trained to decide whether a sample needs to be projected into a deeper embedding or if an early prediction can be made at the d-gate, thus enabling the computation of dynamic representations at different depths. The proposed d-gate modules can be integrated with any deep neural network and reduces the average computational cost of the deep neural networks while maintaining modeling accuracy. Experimental results show that leveraging the proposed d-gate modules led to a ~38% speed-up and ~39% FLOPS reduction on ResNet-101 and ~46% speed-up and ~36% FLOPS reduction on DenseNet-201 trained on the CIFAR10 dataset with only ~2\% drop in accuracy. 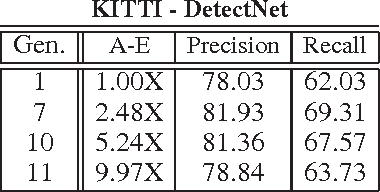 A promising paradigm for achieving highly efficient deep neural networks is the idea of evolutionary deep intelligence, which mimics biological evolution processes to progressively synthesize more efficient networks. A crucial design factor in evolutionary deep intelligence is the genetic encoding scheme used to simulate heredity and determine the architectures of offspring networks. In this study, we take a deeper look at the notion of synaptic cluster-driven evolution of deep neural networks which guides the evolution process towards the formation of a highly sparse set of synaptic clusters in offspring networks. Utilizing a synaptic cluster-driven genetic encoding, the probabilistic encoding of synaptic traits considers not only individual synaptic properties but also inter-synaptic relationships within a deep neural network. This process results in highly sparse offspring networks which are particularly tailored for parallel computational devices such as GPUs and deep neural network accelerator chips. Comprehensive experimental results using four well-known deep neural network architectures (LeNet-5, AlexNet, ResNet-56, and DetectNet) on two different tasks (object categorization and object detection) demonstrate the efficiency of the proposed method. Cluster-driven genetic encoding scheme synthesizes networks that can achieve state-of-the-art performance with significantly smaller number of synapses than that of the original ancestor network. ($\sim$125-fold decrease in synapses for MNIST). Furthermore, the improved cluster efficiency in the generated offspring networks ($\sim$9.71-fold decrease in clusters for MNIST and a $\sim$8.16-fold decrease in clusters for KITTI) is particularly useful for accelerated performance on parallel computing hardware architectures such as those in GPUs and deep neural network accelerator chips. 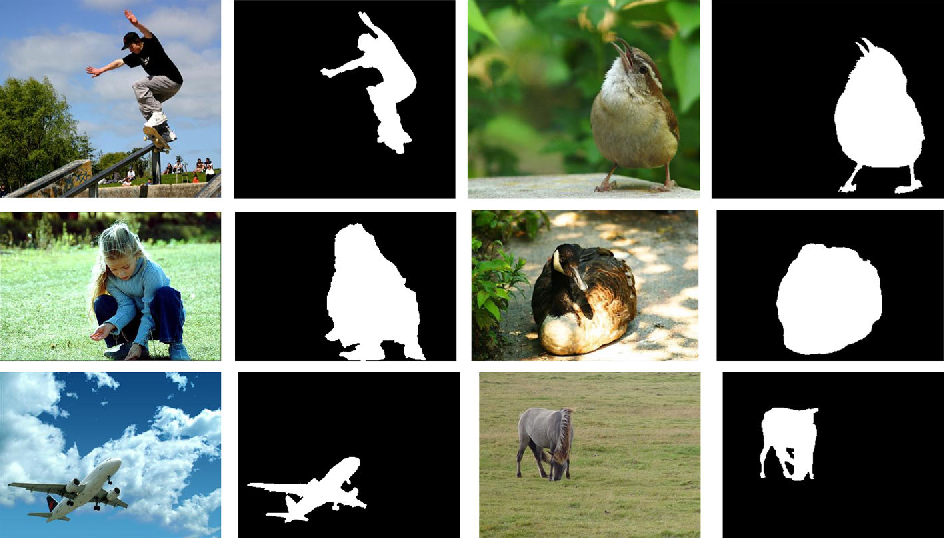 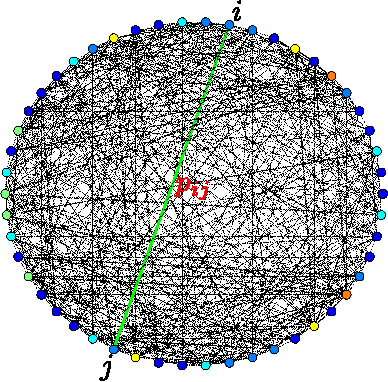 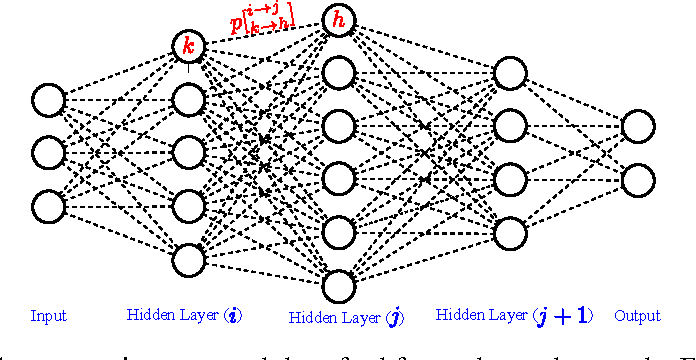 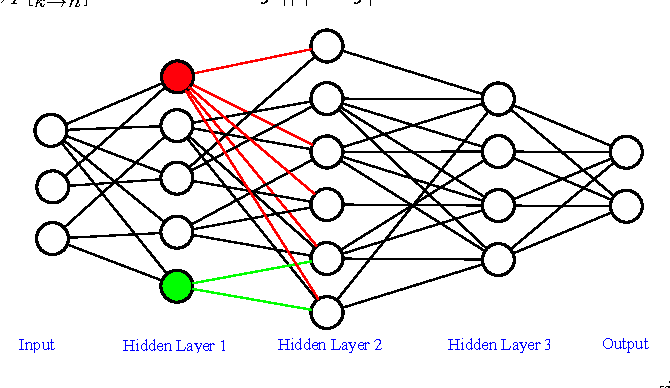 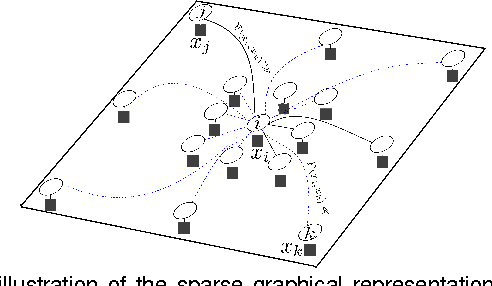 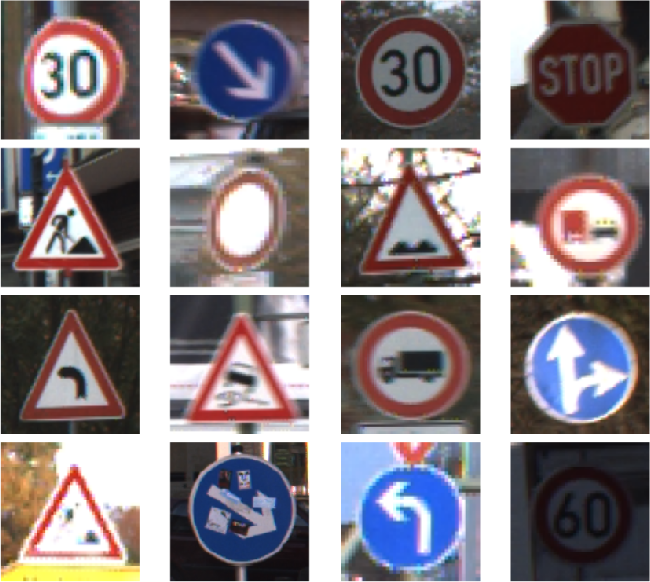 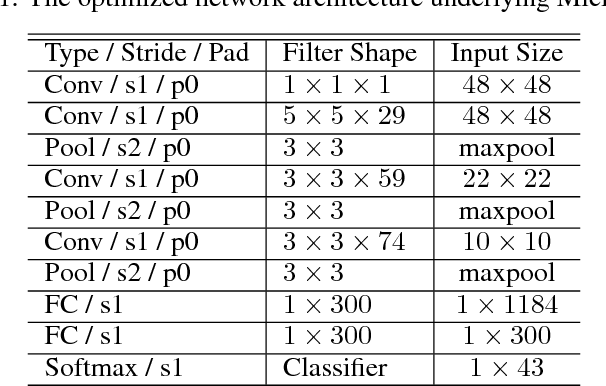 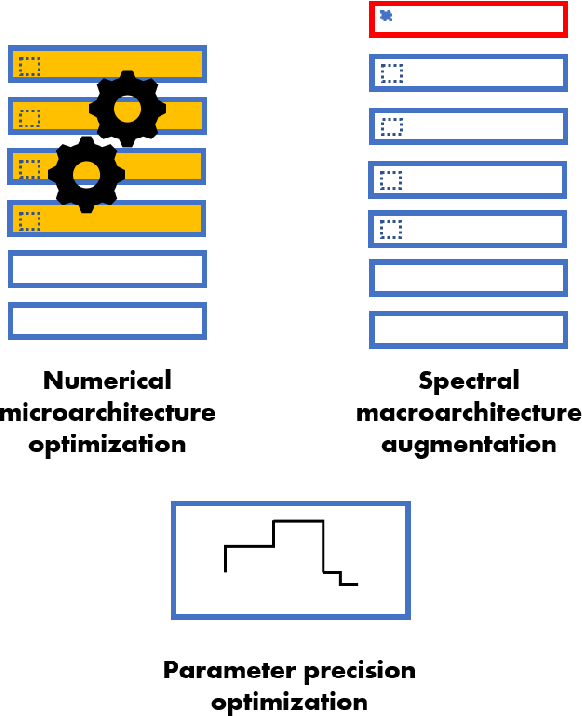 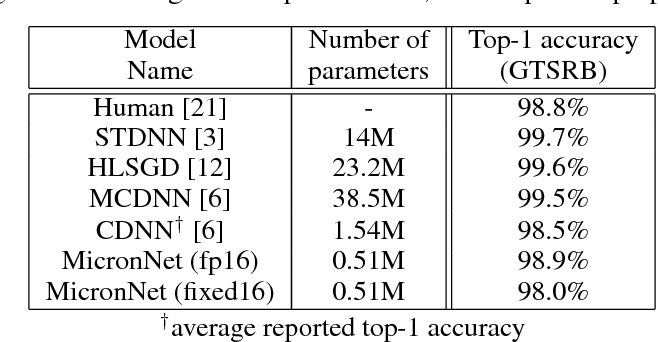 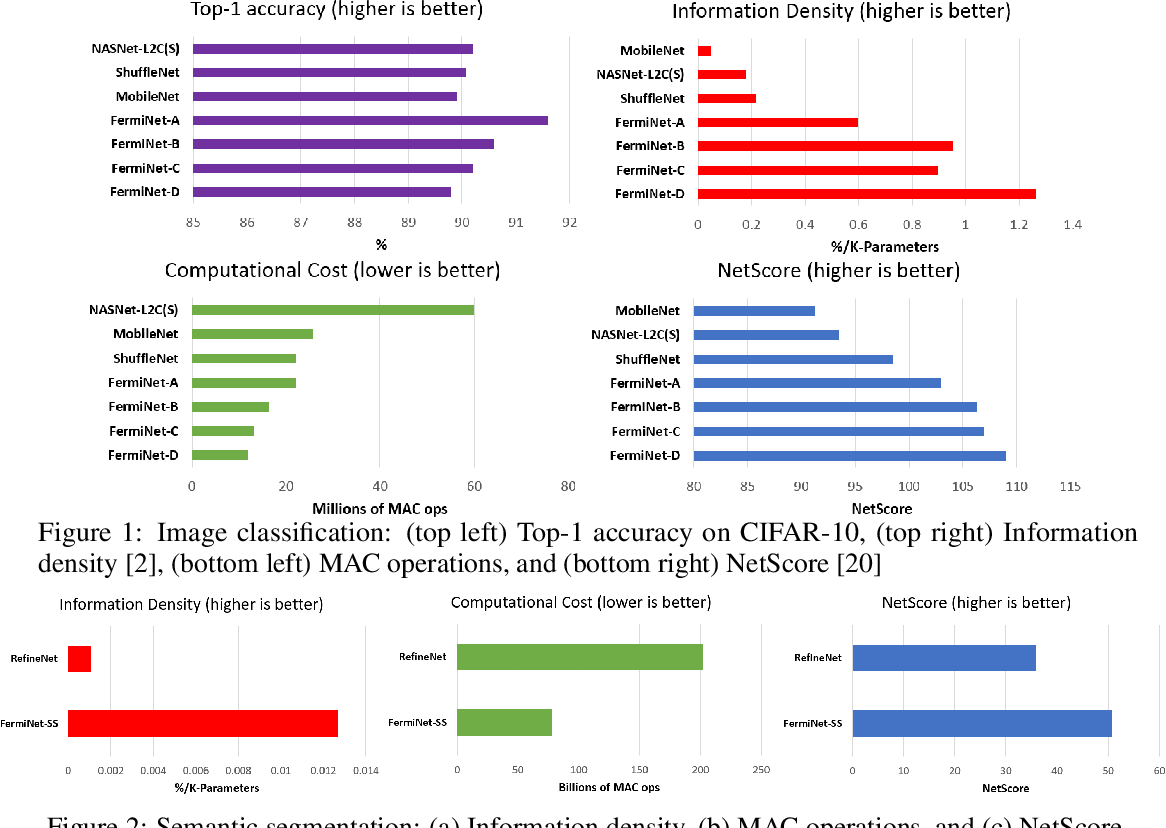 The tremendous potential exhibited by deep learning is often offset by architectural and computational complexity, making widespread deployment a challenge for edge scenarios such as mobile and other consumer devices. To tackle this challenge, we explore the following idea: Can we learn generative machines to automatically generate deep neural networks with efficient network architectures? In this study, we introduce the idea of generative synthesis, which is premised on the intricate interplay between a generator-inquisitor pair that work in tandem to garner insights and learn to generate highly efficient deep neural networks that best satisfies operational requirements. What is most interesting is that, once a generator has been learned through generative synthesis, it can be used to generate not just one but a large variety of different, unique highly efficient deep neural networks that satisfy operational requirements. Experimental results for image classification, semantic segmentation, and object detection tasks illustrate the efficacy of generative synthesis in producing generators that automatically generate highly efficient deep neural networks (which we nickname FermiNets) with higher model efficiency and lower computational costs (reaching >10x more efficient and fewer multiply-accumulate operations than several tested state-of-the-art networks), as well as higher energy efficiency (reaching >4x improvements in image inferences per joule consumed on a Nvidia Tegra X2 mobile processor). As such, generative synthesis can be a powerful, generalized approach for accelerating and improving the building of deep neural networks for on-device edge scenarios. 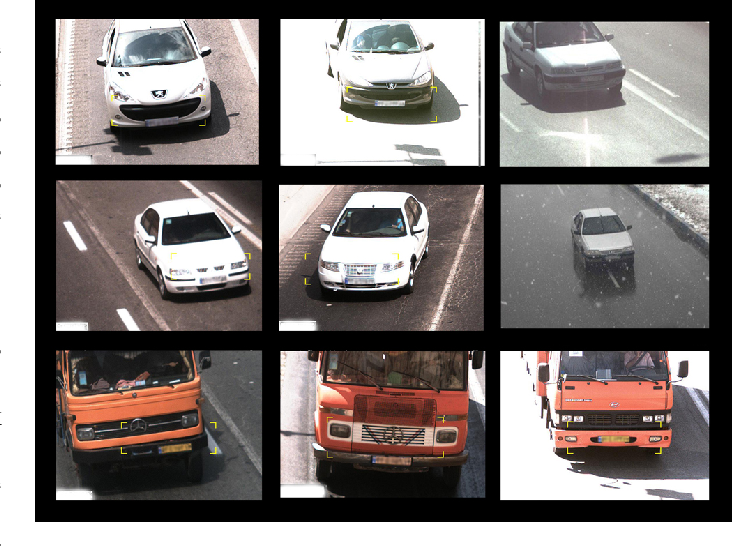 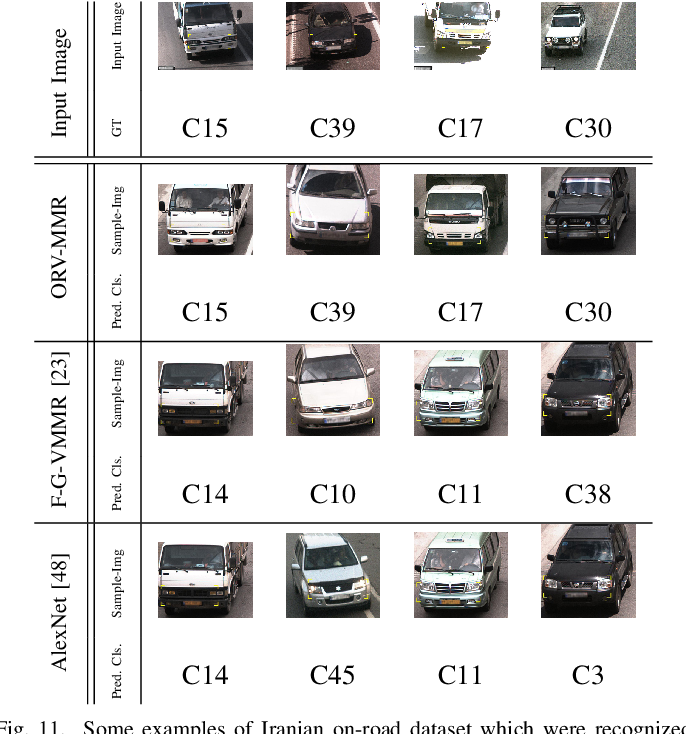 Vehicle Make and Model Recognition (MMR) systems provide a fully automatic framework to recognize and classify different vehicle models. Several approaches have been proposed to address this challenge, however they can perform in restricted conditions. Here, we formulate the vehicle make and model recognition as a fine-grained classification problem and propose a new configurable on-road vehicle make and model recognition framework. We benefit from the unsupervised feature learning methods and in more details we employ Locality constraint Linear Coding (LLC) method as a fast feature encoder for encoding the input SIFT features. The proposed method can perform in real environments of different conditions. This framework can recognize fifty models of vehicles and has an advantage to classify every other vehicle not belonging to one of the specified fifty classes as an unknown vehicle. The proposed MMR framework can be configured to become faster or more accurate based on the application domain. The proposed approach is examined on two datasets including Iranian on-road vehicle dataset and CompuCar dataset. The Iranian on-road vehicle dataset contains images of 50 models of vehicles captured in real situations by traffic cameras in different weather and lighting conditions. Experimental results show superiority of the proposed framework over the state-of-the-art methods on Iranian on-road vehicle datatset and comparable results on CompuCar dataset with 97.5% and 98.4% accuracies, respectively. 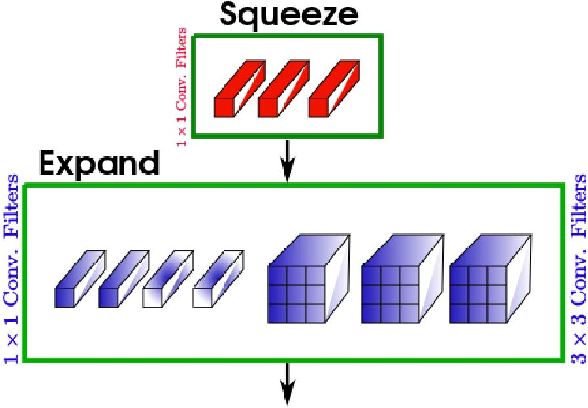 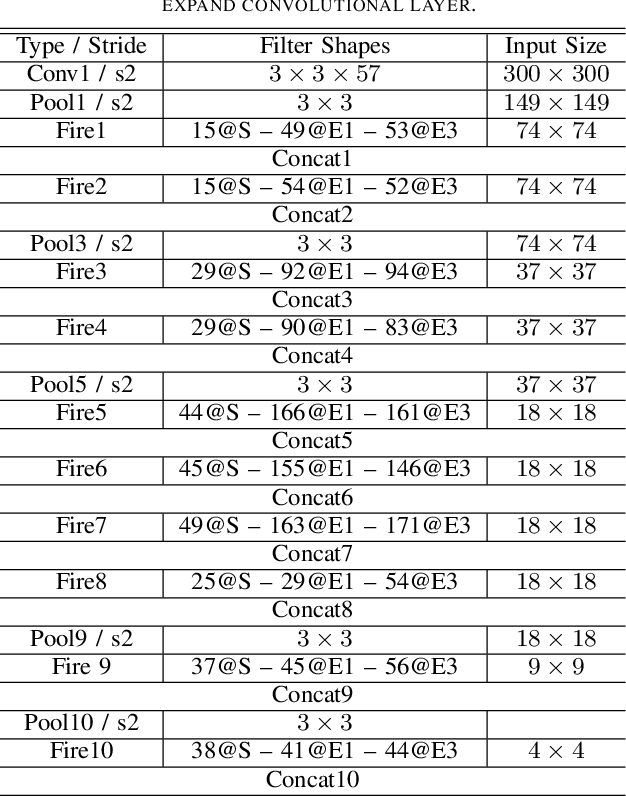 While deep neural networks have been shown in recent years to outperform other machine learning methods in a wide range of applications, one of the biggest challenges with enabling deep neural networks for widespread deployment on edge devices such as mobile and other consumer devices is high computational and memory requirements. Recently, there has been greater exploration into small deep neural network architectures that are more suitable for edge devices, with one of the most popular architectures being SqueezeNet, with an incredibly small model size of 4.8MB. Taking further advantage of the notion that many applications of machine learning on edge devices are often characterized by a low number of target classes, this study explores the utility of combining architectural modifications and an evolutionary synthesis strategy for synthesizing even smaller deep neural architectures based on the more recent SqueezeNet v1.1 macroarchitecture for applications with fewer target classes. In particular, architectural modifications are first made to SqueezeNet v1.1 to accommodate for a 10-class ImageNet-10 dataset, and then an evolutionary synthesis strategy is leveraged to synthesize more efficient deep neural networks based on this modified macroarchitecture. The resulting SquishedNets possess model sizes ranging from 2.4MB to 0.95MB (~5.17X smaller than SqueezeNet v1.1, or 253X smaller than AlexNet). Furthermore, the SquishedNets are still able to achieve accuracies ranging from 81.2% to 77%, and able to process at speeds of 156 images/sec to as much as 256 images/sec on a Nvidia Jetson TX1 embedded chip. These preliminary results show that a combination of architectural modifications and an evolutionary synthesis strategy can be a useful tool for producing very small deep neural network architectures that are well-suited for edge device scenarios.

Fast YOLO: A Fast You Only Look Once System for Real-time Embedded Object Detection in Video 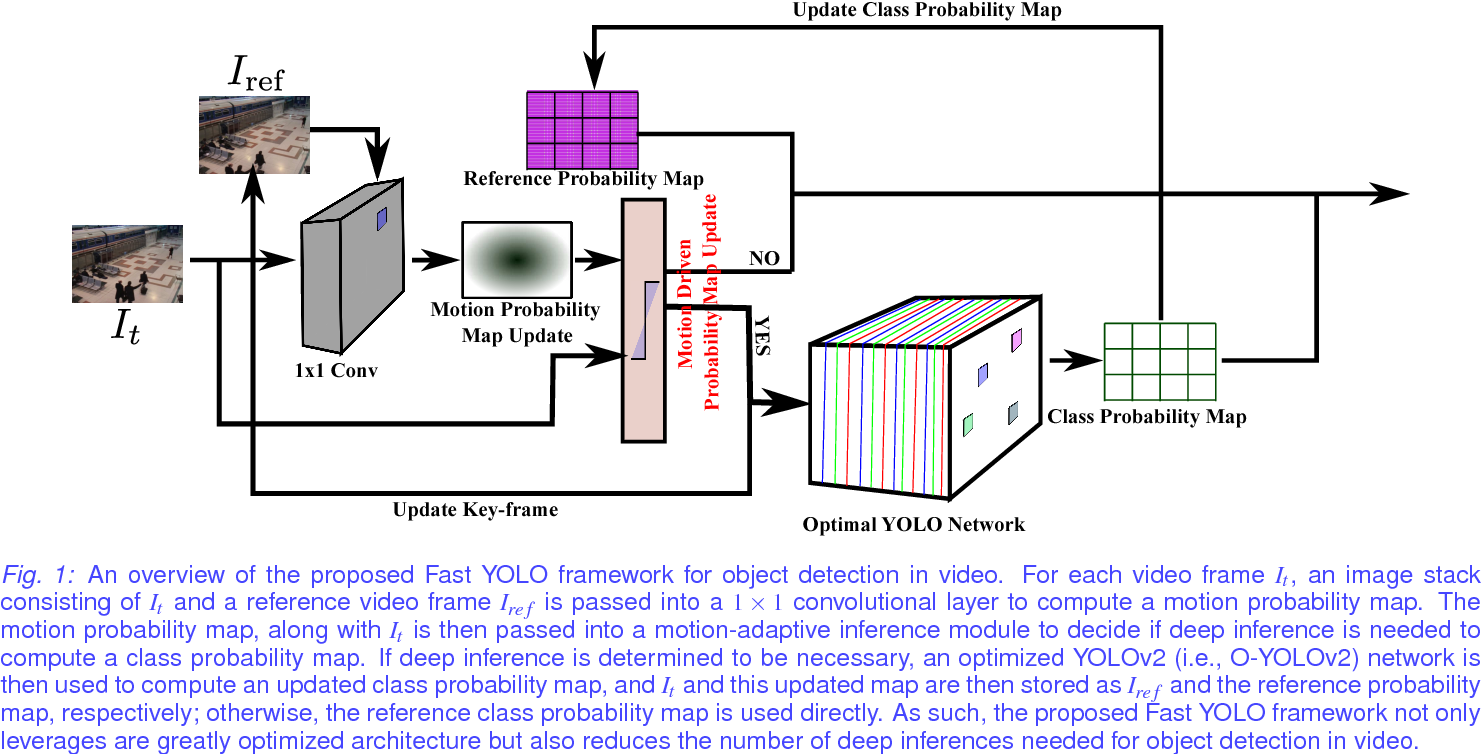 Object detection is considered one of the most challenging problems in this field of computer vision, as it involves the combination of object classification and object localization within a scene. Recently, deep neural networks (DNNs) have been demonstrated to achieve superior object detection performance compared to other approaches, with YOLOv2 (an improved You Only Look Once model) being one of the state-of-the-art in DNN-based object detection methods in terms of both speed and accuracy. Although YOLOv2 can achieve real-time performance on a powerful GPU, it still remains very challenging for leveraging this approach for real-time object detection in video on embedded computing devices with limited computational power and limited memory. In this paper, we propose a new framework called Fast YOLO, a fast You Only Look Once framework which accelerates YOLOv2 to be able to perform object detection in video on embedded devices in a real-time manner. First, we leverage the evolutionary deep intelligence framework to evolve the YOLOv2 network architecture and produce an optimized architecture (referred to as O-YOLOv2 here) that has 2.8X fewer parameters with just a ~2% IOU drop. To further reduce power consumption on embedded devices while maintaining performance, a motion-adaptive inference method is introduced into the proposed Fast YOLO framework to reduce the frequency of deep inference with O-YOLOv2 based on temporal motion characteristics. Experimental results show that the proposed Fast YOLO framework can reduce the number of deep inferences by an average of 38.13%, and an average speedup of ~3.3X for objection detection in video compared to the original YOLOv2, leading Fast YOLO to run an average of ~18FPS on a Nvidia Jetson TX1 embedded system. 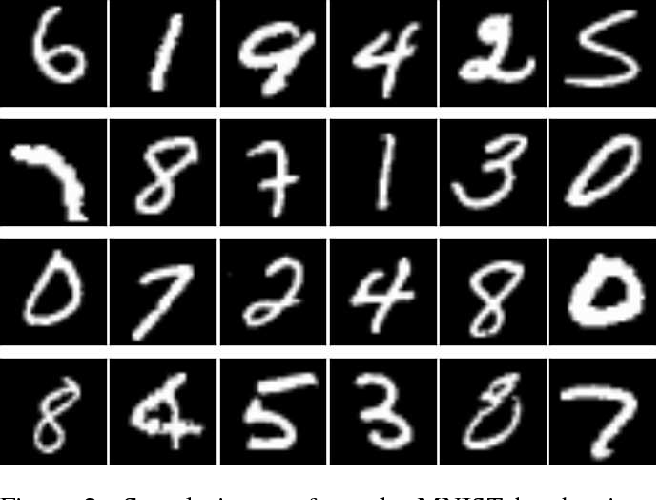 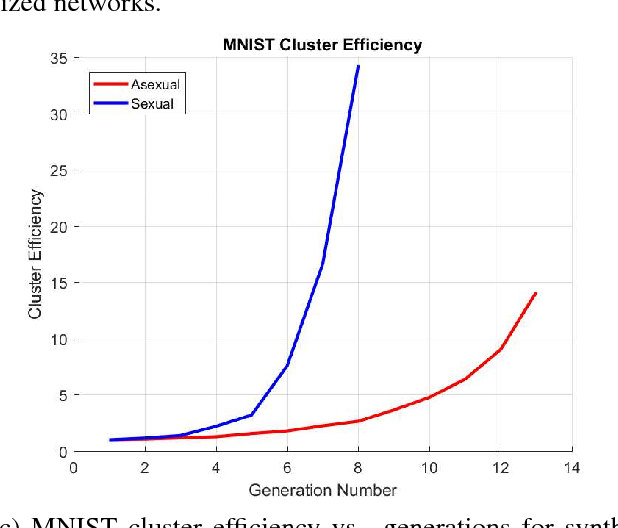 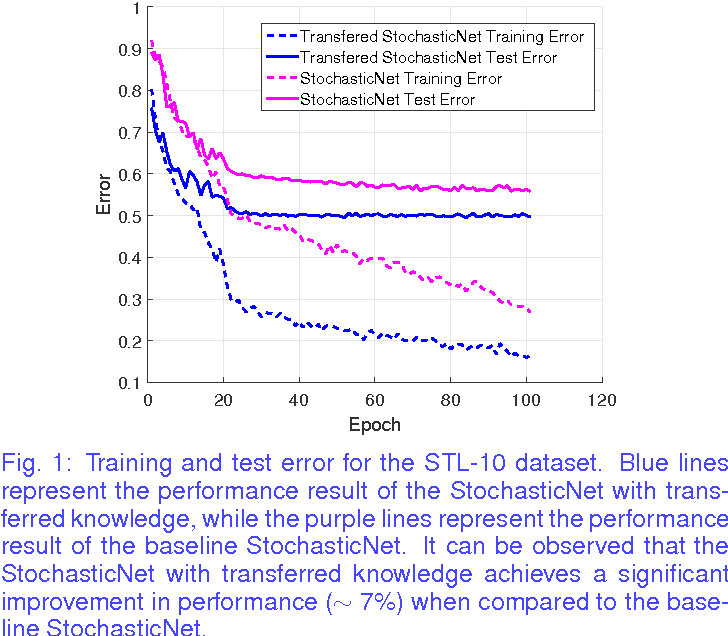 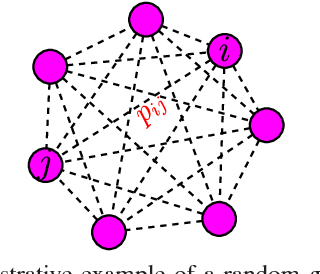 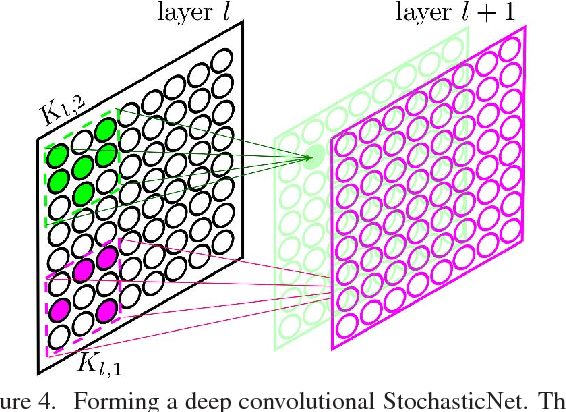 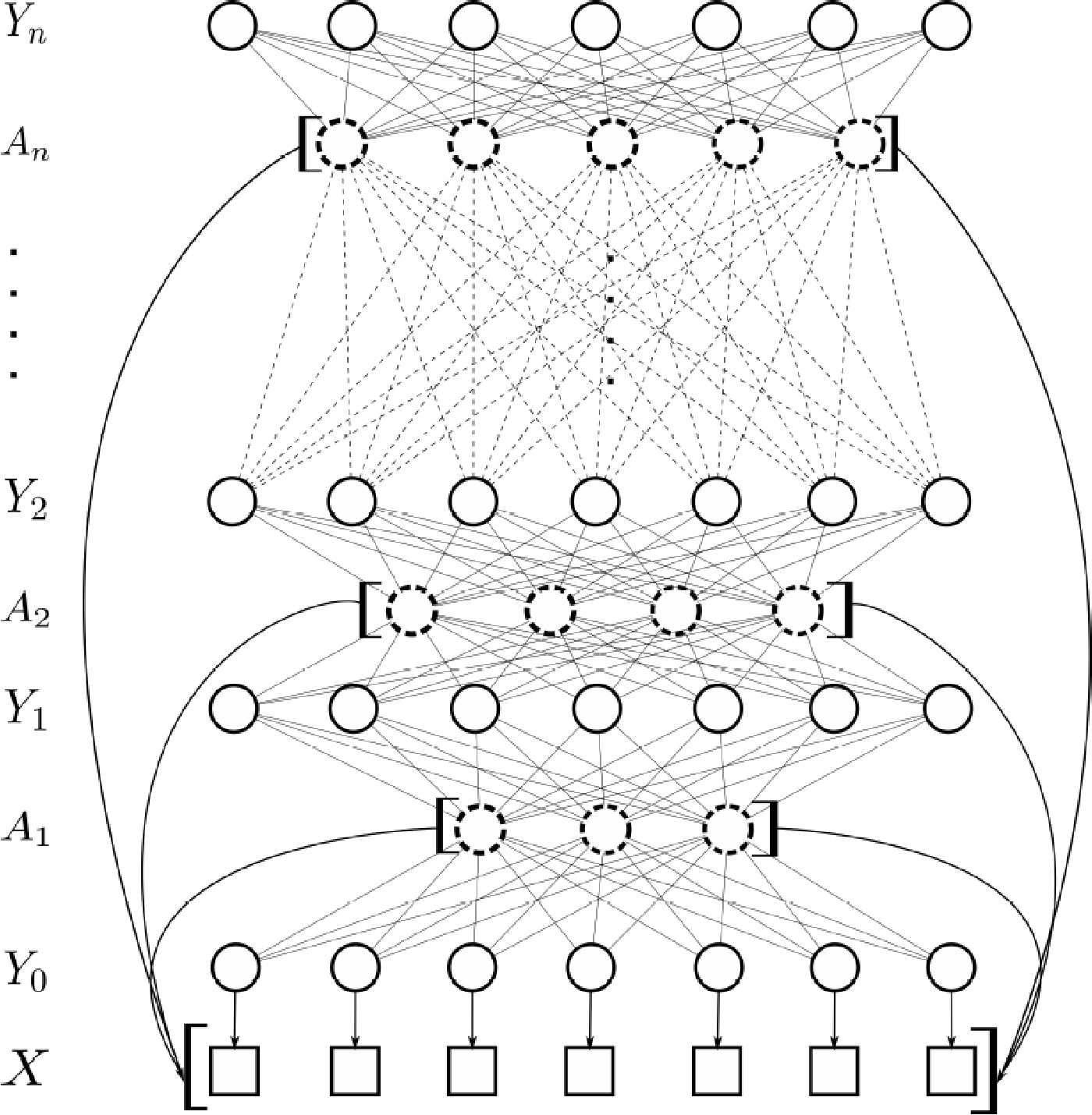 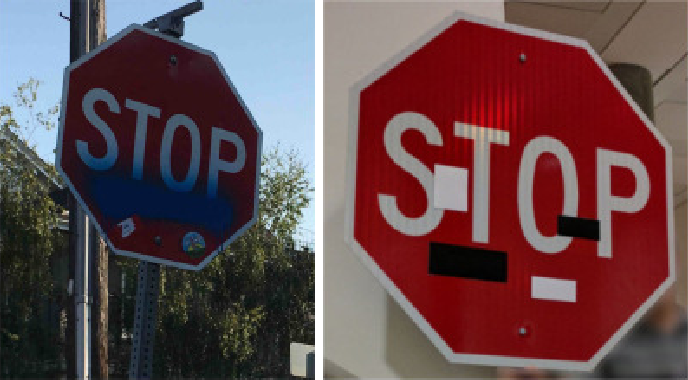 This paper analyzes the robustness of deep learning models in autonomous driving applications and discusses the practical solutions to address that.