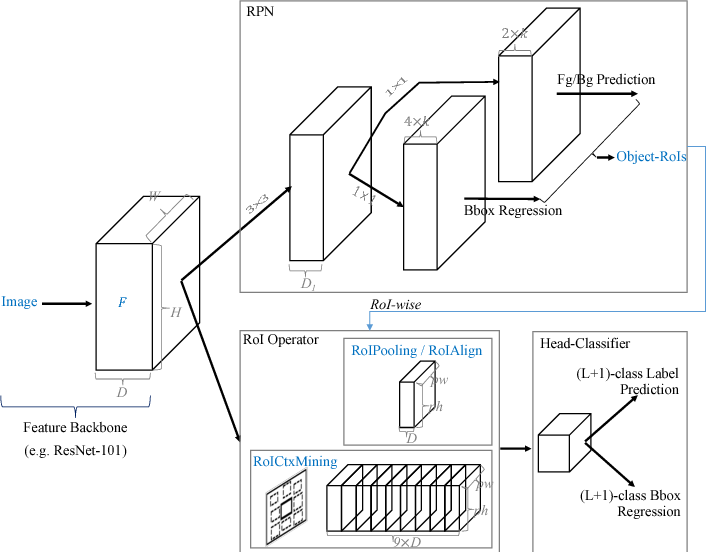 Region-based convolutional neural networks (R-CNN)~\cite{fast_rcnn,faster_rcnn,mask_rcnn} have largely dominated object detection. Operators defined on RoIs (Region of Interests) play an important role in R-CNNs such as RoIPooling~\cite{fast_rcnn} and RoIAlign~\cite{mask_rcnn}. They all only utilize information inside RoIs for RoI prediction, even with their recent deformable extensions~\cite{deformable_cnn}. Although surrounding context is well-known for its importance in object detection, it has yet been integrated in R-CNNs in a flexible and effective way. Inspired by the auto-context work~\cite{auto_context} and the multi-class object layout work~\cite{nms_context}, this paper presents a generic context-mining RoI operator (i.e., \textit{RoICtxMining}) seamlessly integrated in R-CNNs, and the resulting object detection system is termed \textbf{Auto-Context R-CNN} which is trained end-to-end. The proposed RoICtxMining operator is a simple yet effective two-layer extension of the RoIPooling or RoIAlign operator. Centered at an object-RoI, it creates a $3\times 3$ layout to mine contextual information adaptively in the $8$ surrounding context regions on-the-fly. Within each of the $8$ context regions, a context-RoI is mined in term of discriminative power and its RoIPooling / RoIAlign features are concatenated with the object-RoI for final prediction. \textit{The proposed Auto-Context R-CNN is robust to occlusion and small objects, and shows promising vulnerability for adversarial attacks without being adversarially-trained.} In experiments, it is evaluated using RoIPooling as the backbone and shows competitive results on Pascal VOC, Microsoft COCO, and KITTI datasets (including $6.9\%$ mAP improvements over the R-FCN~\cite{rfcn} method on COCO \textit{test-dev} dataset and the first place on both KITTI pedestrian and cyclist detection as of this submission). 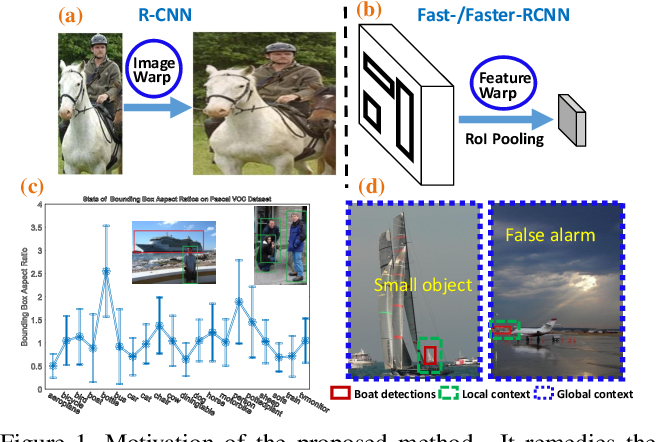 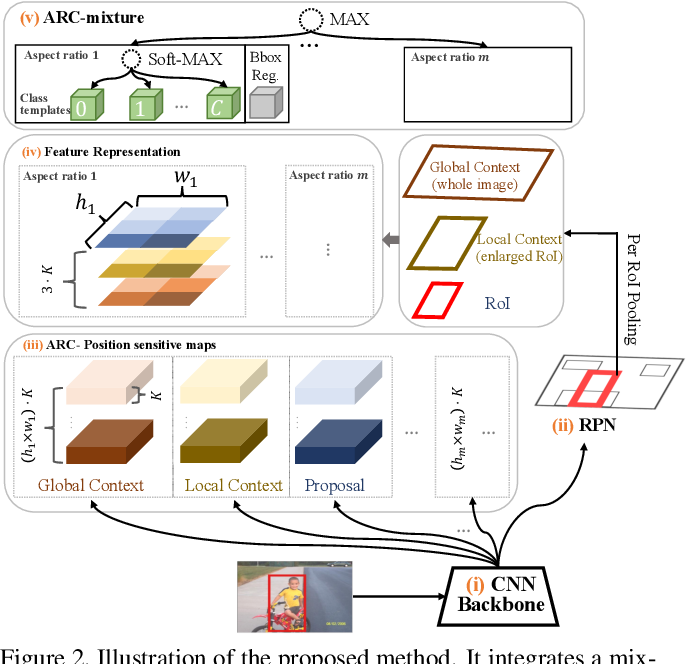 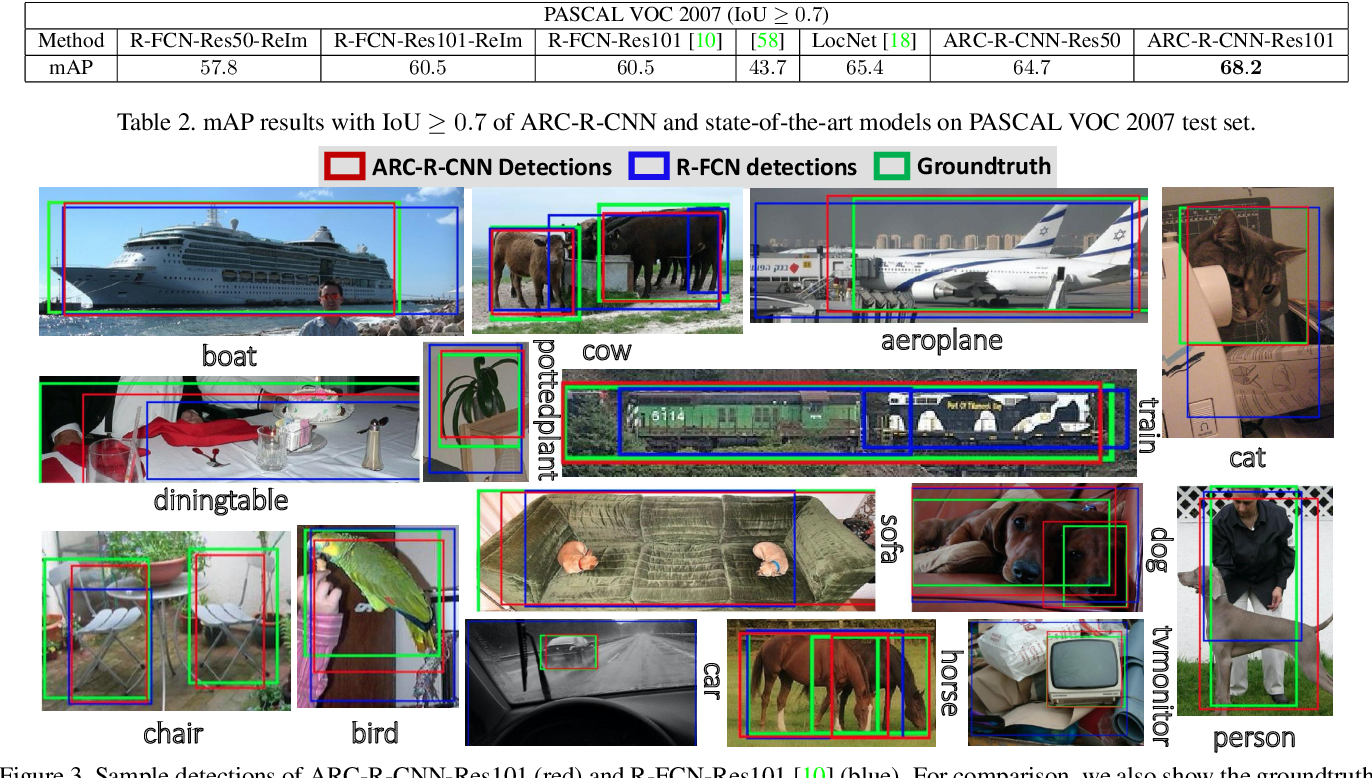 Jointly integrating aspect ratio and context has been extensively studied and shown performance improvement in traditional object detection systems such as the DPMs. It, however, has been largely ignored in deep neural network based detection systems. This paper presents a method of integrating a mixture of object models and region-based convolutional networks for accurate object detection. Each mixture component accounts for both object aspect ratio and multi-scale contextual information explicitly: (i) it exploits a mixture of tiling configurations in the RoI pooling to remedy the warping artifacts caused by a single type RoI pooling (e.g., with equally-sized 7 x 7 cells), and to respect the underlying object shapes more; (ii) it "looks from both the inside and the outside of a RoI" by incorporating contextual information at two scales: global context pooled from the whole image and local context pooled from the surrounding of a RoI. To facilitate accurate detection, this paper proposes a multi-stage detection scheme for integrating the mixture of object models, which utilizes the detection results of the model at the previous stage as the proposals for the current in both training and testing. The proposed method is called the aspect ratio and context aware region-based convolutional network (ARC-R-CNN). In experiments, ARC-R-CNN shows very competitive results with Faster R-CNN [41] and R-FCN [10] on two datasets: the PASCAL VOC and the Microsoft COCO. It obtains significantly better mAP performance using high IoU thresholds on both datasets. 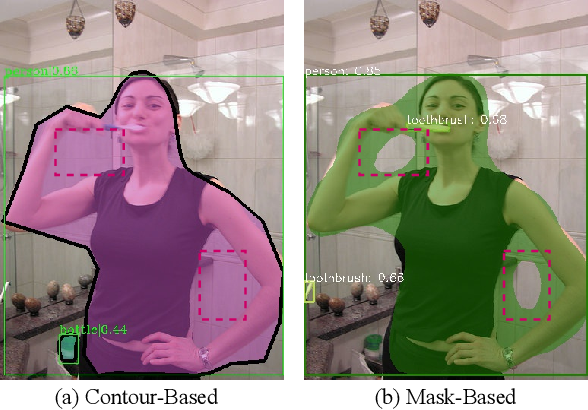 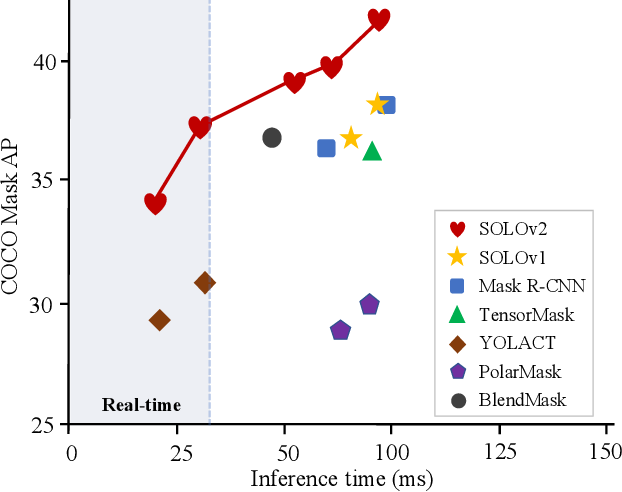 In this work, we aim at building a simple, direct, and fast instance segmentation framework with strong performance. We follow the principle of the SOLO method of Wang et al. "SOLO: segmenting objects by locations". Importantly, we take one step further by dynamically learning the mask head of the object segmenter such that the mask head is conditioned on the location. Specifically, the mask branch is decoupled into a mask kernel branch and mask feature branch, which are responsible for learning the convolution kernel and the convolved features respectively. Moreover, we propose Matrix NMS (non maximum suppression) to significantly reduce the inference time overhead due to NMS of masks. Our Matrix NMS performs NMS with parallel matrix operations in one shot, and yields better results. We demonstrate a simple direct instance segmentation system, outperforming a few state-of-the-art methods in both speed and accuracy. A light-weight version of SOLOv2 executes at 31.3 FPS and yields 37.1% AP. Moreover, our state-of-the-art results in object detection (from our mask byproduct) and panoptic segmentation show the potential to serve as a new strong baseline for many instance-level recognition tasks besides instance segmentation. Code is available at: https://git.io/AdelaiDet 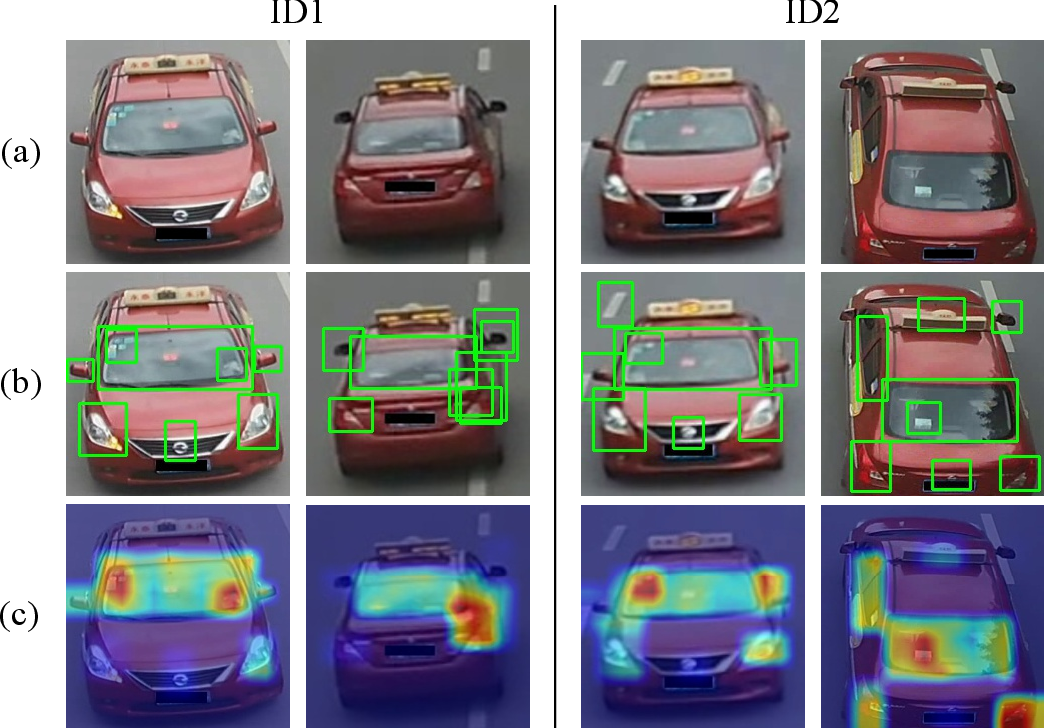 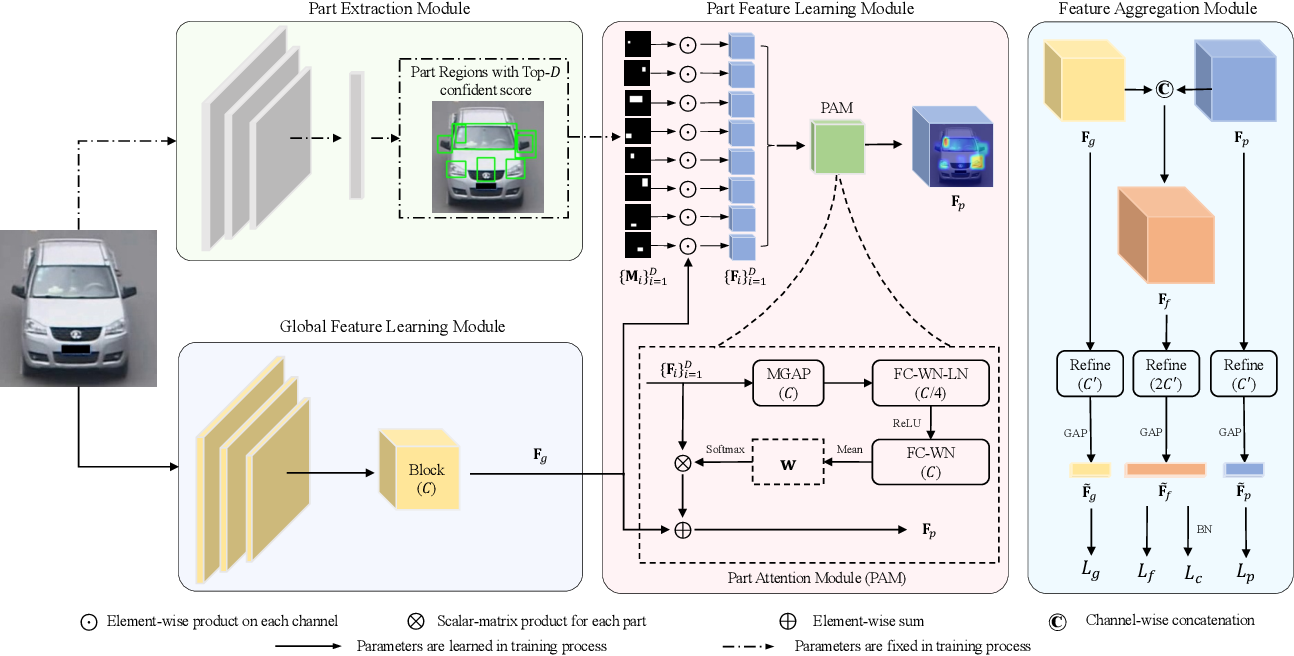 Vehicle re-identification (Re-ID) often requires one to recognize the fine-grained visual differences between vehicles. Besides the holistic appearance of vehicles which is easily affected by the viewpoint variation and distortion, vehicle parts also provide crucial cues to differentiate near-identical vehicles. Motivated by these observations, we introduce a Part-Guided Attention Network (PGAN) to pinpoint the prominent part regions and effectively combine the global and part information for discriminative feature learning. PGAN first detects the locations of different part components and salient regions regardless of the vehicle identity, which serve as the bottom-up attention to narrow down the possible searching regions. To estimate the importance of detected parts, we propose a Part Attention Module (PAM) to adaptively locate the most discriminative regions with high-attention weights and suppress the distraction of irrelevant parts with relatively low weights. The PAM is guided by the Re-ID loss and therefore provides top-down attention that enables attention to be calculated at the level of car parts and other salient regions. Finally, we aggregate the global appearance and part features to improve the feature performance further. The PGAN combines part-guided bottom-up and top-down attention, global and part visual features in an end-to-end framework. Extensive experiments demonstrate that the proposed method achieves new state-of-the-art vehicle Re-ID performance on four large-scale benchmark datasets.