Models, code, and papers for "Shengfeng He": 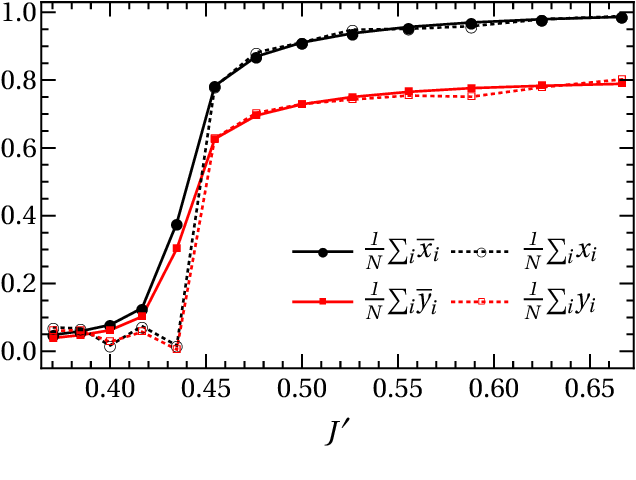 We study active restoration of noise-corrupted images generated via the Gibbs probability of an Ising ferromagnet in external magnetic field. Ferromagnetism accounts for the prior expectation of data smoothness, i.e. a positive correlation between neighbouring pixels (Ising spins), while the magnetic field refers to the bias. The restoration is actively supervised by requesting the true values of certain pixels after a noisy observation. This additional information improves restoration of other pixels. The optimal strategy of active inference is not known for realistic (two-dimensional) images. We determine this strategy for the mean-field version of the model and show that it amounts to supervising the values of spins (pixels) that do not agree with the sign of the average magnetization. The strategy leads to a transparent analytical expression for the minimal Bayesian risk, and shows that there is a maximal number of pixels beyond of which the supervision is useless. We show numerically that this strategy applies for two-dimensional images away from the critical regime. Within this regime the strategy is outperformed by its local (adaptive) version, which supervises pixels that do not agree with their Bayesian estimate. We show on transparent examples how active supervising can be essential in recovering noise-corrupted images and advocate for a wider usage of active methods in image restoration. 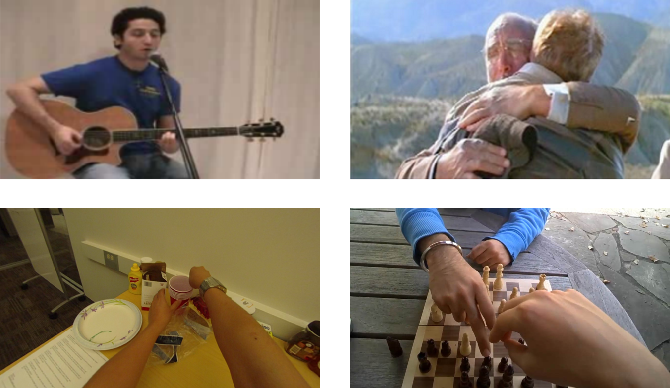 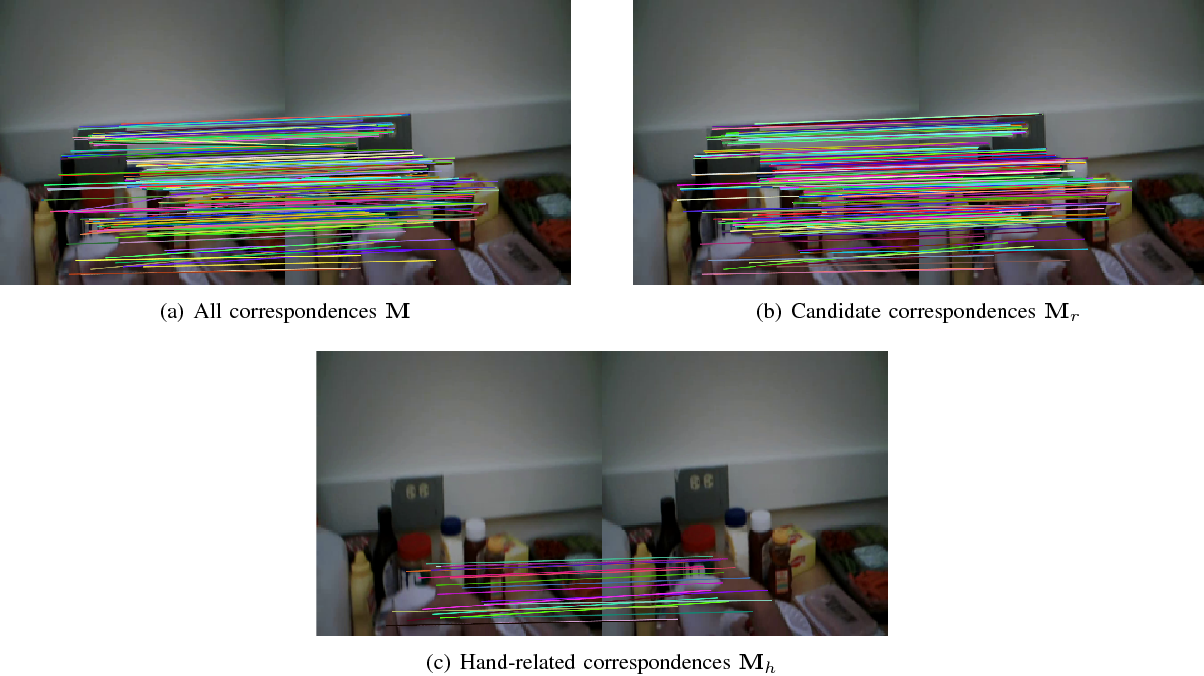 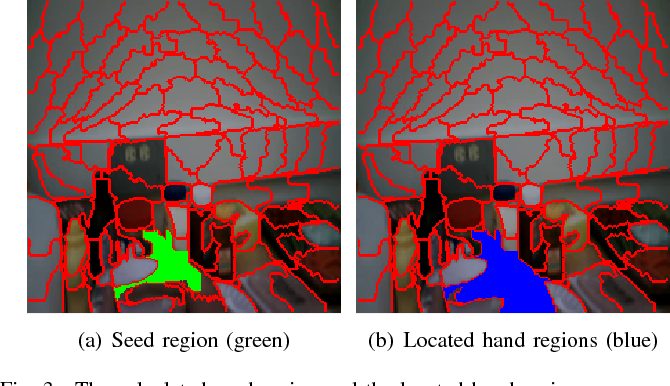 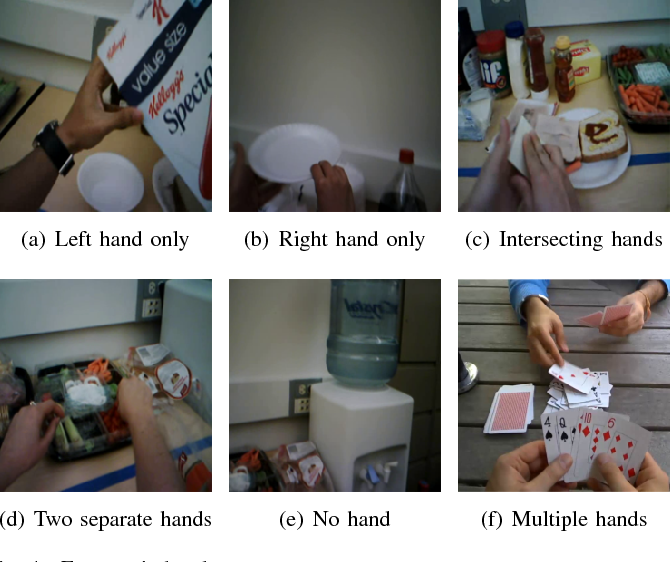 Egocentric videos, which mainly record the activities carried out by the users of the wearable cameras, have drawn much research attentions in recent years. Due to its lengthy content, a large number of ego-related applications have been developed to abstract the captured videos. As the users are accustomed to interacting with the target objects using their own hands while their hands usually appear within their visual fields during the interaction, an egocentric hand detection step is involved in tasks like gesture recognition, action recognition and social interaction understanding. In this work, we propose a dynamic region growing approach for hand region detection in egocentric videos, by jointly considering hand-related motion and egocentric cues. We first determine seed regions that most likely belong to the hand, by analyzing the motion patterns across successive frames. The hand regions can then be located by extending from the seed regions, according to the scores computed for the adjacent superpixels. These scores are derived from four egocentric cues: contrast, location, position consistency and appearance continuity. We discuss how to apply the proposed method in real-life scenarios, where multiple hands irregularly appear and disappear from the videos. Experimental results on public datasets show that the proposed method achieves superior performance compared with the state-of-the-art methods, especially in complicated scenarios. 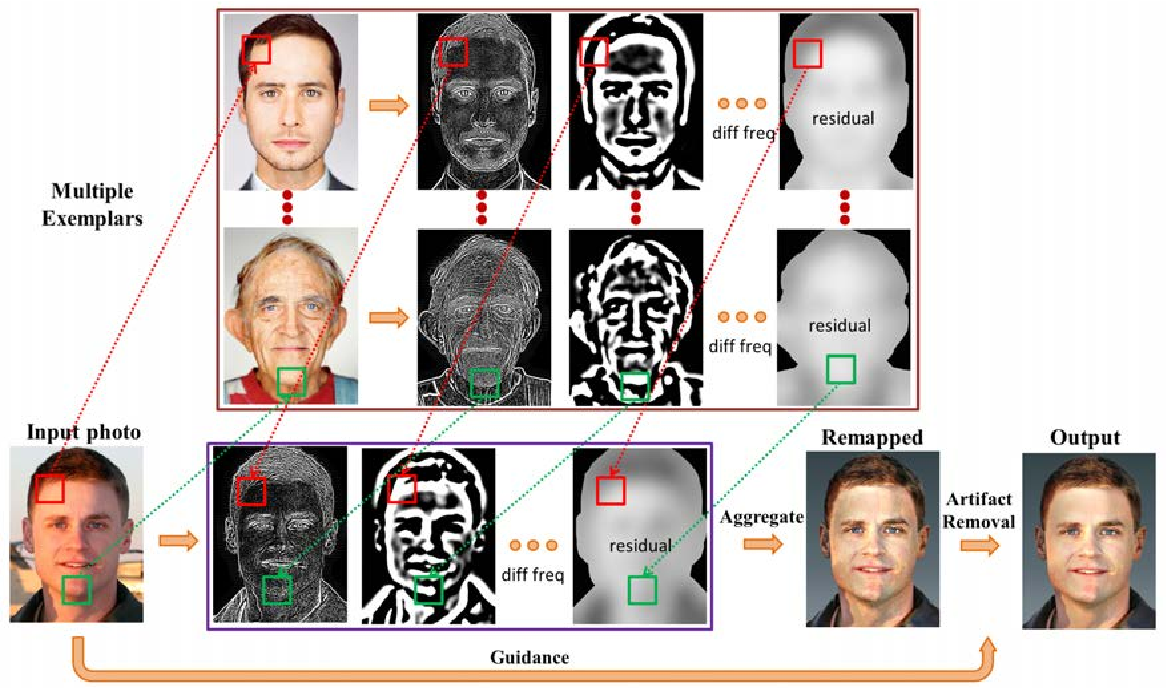 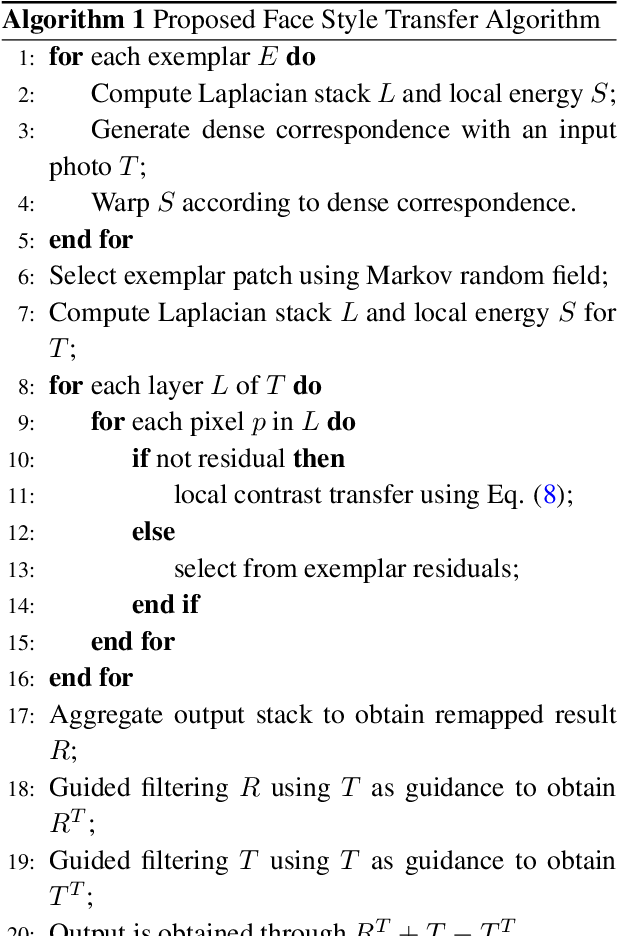 We address the problem of transferring the style of a headshot photo to face images. Existing methods using a single exemplar lead to inaccurate results when the exemplar does not contain sufficient stylized facial components for a given photo. In this work, we propose an algorithm to stylize face images using multiple exemplars containing different subjects in the same style. Patch correspondences between an input photo and multiple exemplars are established using a Markov Random Field (MRF), which enables accurate local energy transfer via Laplacian stacks. As image patches from multiple exemplars are used, the boundaries of facial components on the target image are inevitably inconsistent. The artifacts are removed by a post-processing step using an edge-preserving filter. Experimental results show that the proposed algorithm consistently produces visually pleasing results.

Learning to Hallucinate Face Images via Component Generation and Enhancement 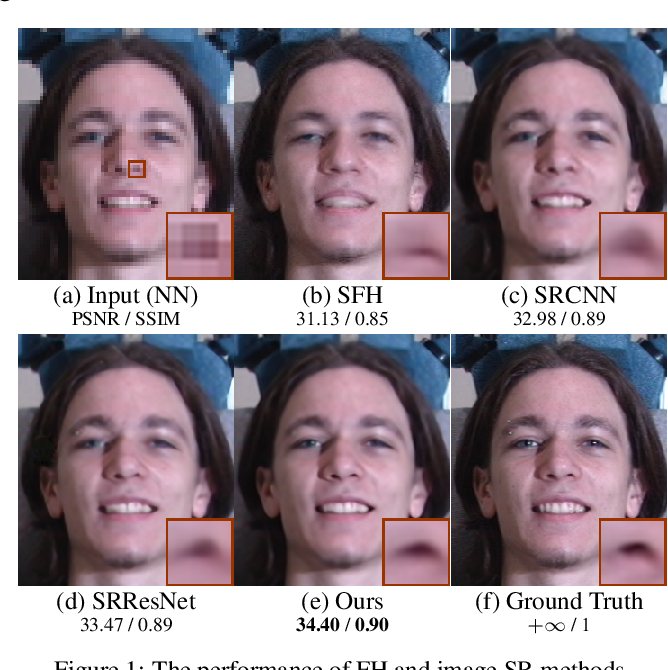 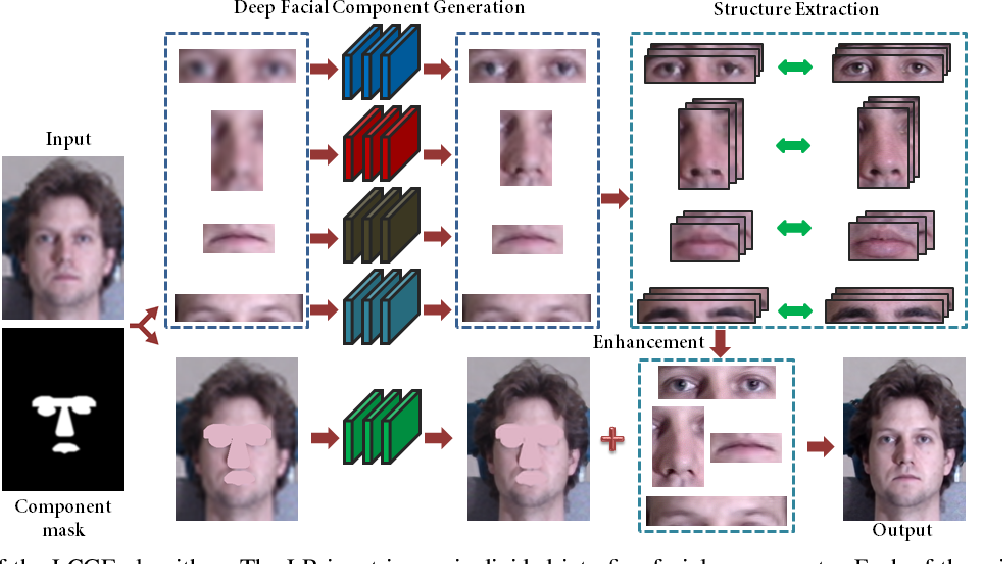 We propose a two-stage method for face hallucination. First, we generate facial components of the input image using CNNs. These components represent the basic facial structures. Second, we synthesize fine-grained facial structures from high resolution training images. The details of these structures are transferred into facial components for enhancement. Therefore, we generate facial components to approximate ground truth global appearance in the first stage and enhance them through recovering details in the second stage. The experiments demonstrate that our method performs favorably against state-of-the-art methods

We address the problem of video representation learning without human-annotated labels. While previous efforts address the problem by designing novel self-supervised tasks using video data, the learned features are merely on a frame-by-frame basis, which are not applicable to many video analytic tasks where spatio-temporal features are prevailing. In this paper we propose a novel self-supervised approach to learn spatio-temporal features for video representation. Inspired by the success of two-stream approaches in video classification, we propose to learn visual features by regressing both motion and appearance statistics along spatial and temporal dimensions, given only the input video data. Specifically, we extract statistical concepts (fast-motion region and the corresponding dominant direction, spatio-temporal color diversity, dominant color, etc.) from simple patterns in both spatial and temporal domains. Unlike prior puzzles that are even hard for humans to solve, the proposed approach is consistent with human inherent visual habits and therefore easy to answer. We conduct extensive experiments with C3D to validate the effectiveness of our proposed approach. The experiments show that our approach can significantly improve the performance of C3D when applied to video classification tasks. Code is available at https://github.com/laura-wang/video_repres_mas. 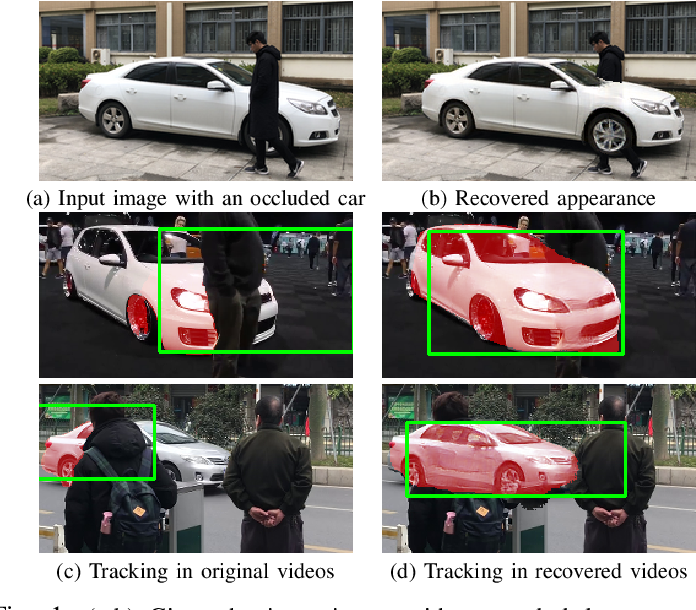 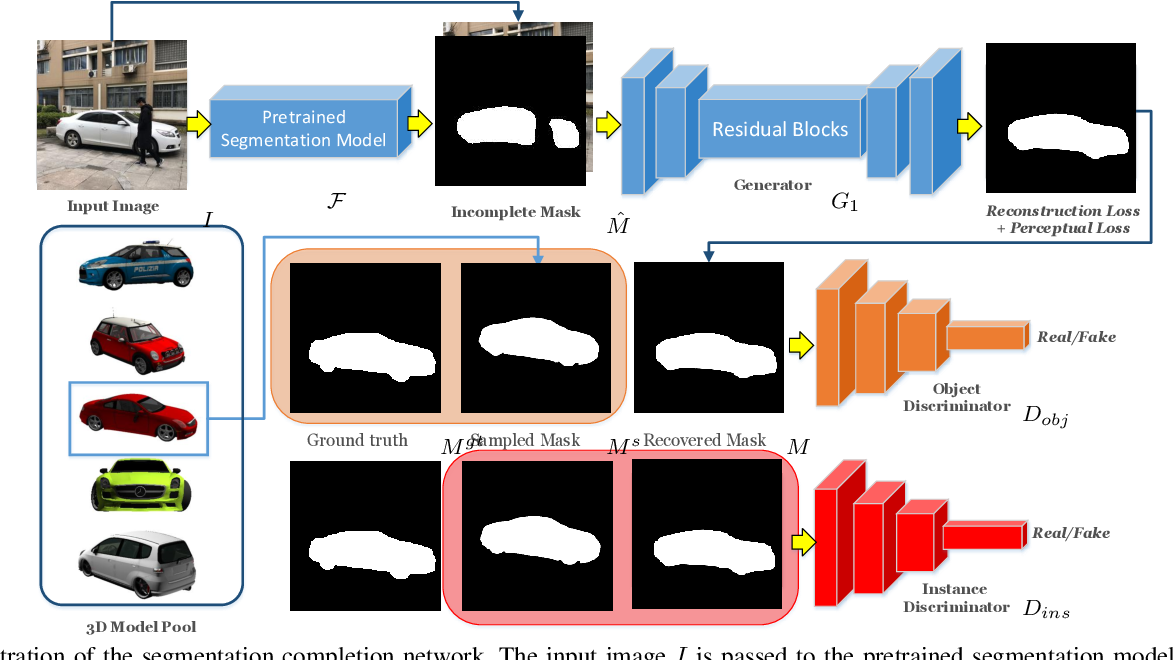 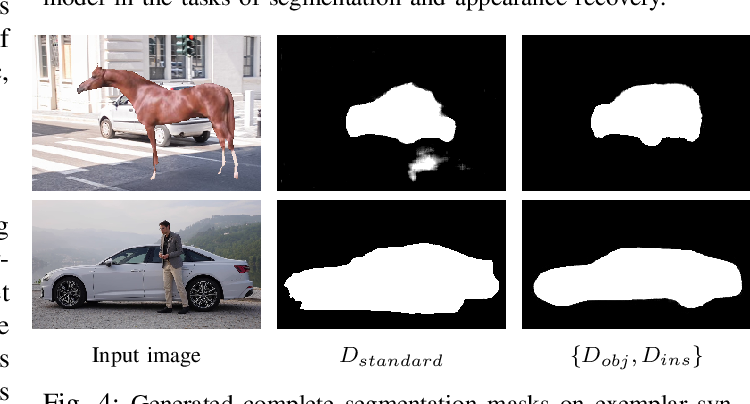 Numerous efforts have been made to design different low level saliency cues for the RGBD saliency detection, such as color or depth contrast features, background and color compactness priors. However, how these saliency cues interact with each other and how to incorporate these low level saliency cues effectively to generate a master saliency map remain a challenging problem. In this paper, we design a new convolutional neural network (CNN) to fuse different low level saliency cues into hierarchical features for automatically detecting salient objects in RGBD images. In contrast to the existing works that directly feed raw image pixels to the CNN, the proposed method takes advantage of the knowledge in traditional saliency detection by adopting various meaningful and well-designed saliency feature vectors as input. This can guide the training of CNN towards detecting salient object more effectively due to the reduced learning ambiguity. We then integrate a Laplacian propagation framework with the learned CNN to extract a spatially consistent saliency map by exploiting the intrinsic structure of the input image. Extensive quantitative and qualitative experimental evaluations on three datasets demonstrate that the proposed method consistently outperforms state-of-the-art methods.


* This paper has been submitted to IEEE Transactions on Image Processing 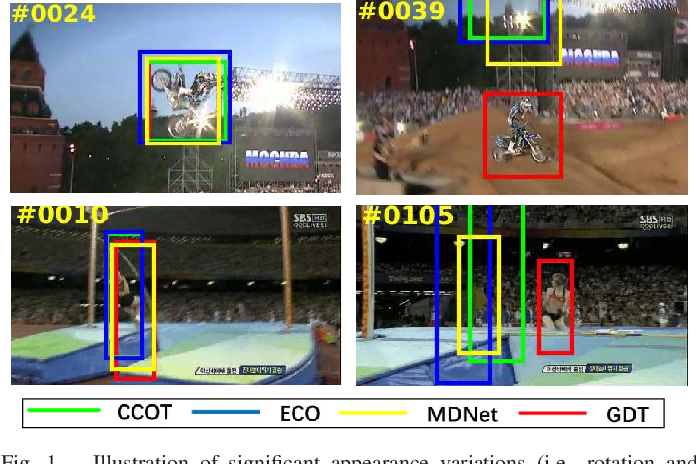 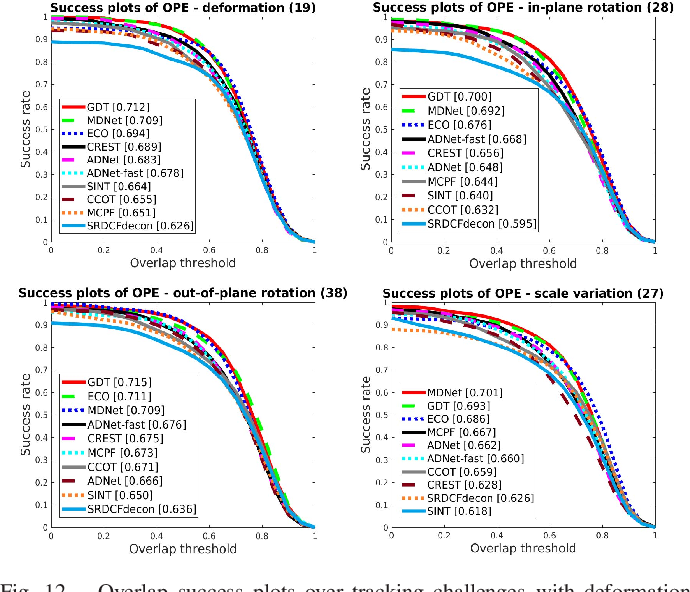 The tracking-by-detection framework receives growing attentions through the integration with the Convolutional Neural Network (CNN). Existing methods, however, fail to track objects with severe appearance variations. This is because the traditional convolutional operation is performed on fixed grids, and thus may not be able to find the correct response while the object is changing pose or under varying environmental conditions. In this paper, we propose a deformable convolution layer to enrich the target appearance representations in the tracking-by-detection framework. We aim to capture the target appearance variations via deformable convolution and supplement its original appearance through residual learning. Meanwhile, we propose a gated fusion scheme to control how the variations captured by the deformable convolution affect the original appearance. The enriched feature representation through deformable convolution facilitates the discrimination of the CNN classifier on the target object and background. Extensive experiments on the standard benchmarks show that the proposed tracker performs favorably against state-of-the-art methods. 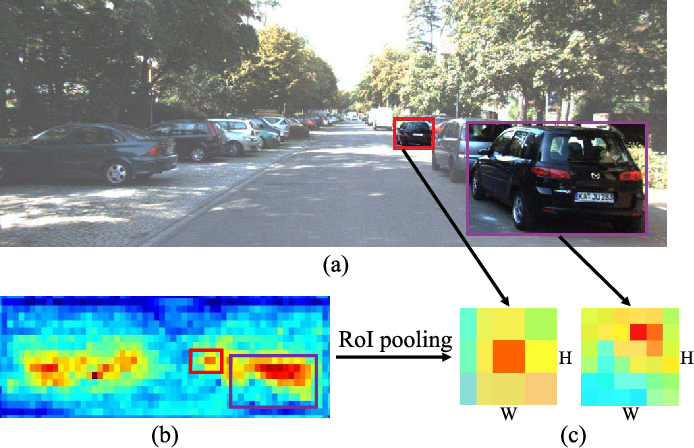 Vision-based vehicle detection approaches achieve incredible success in recent years with the development of deep convolutional neural network (CNN). However, existing CNN based algorithms suffer from the problem that the convolutional features are scale-sensitive in object detection task but it is common that traffic images and videos contain vehicles with a large variance of scales. In this paper, we delve into the source of scale sensitivity, and reveal two key issues: 1) existing RoI pooling destroys the structure of small scale objects, 2) the large intra-class distance for a large variance of scales exceeds the representation capability of a single network. Based on these findings, we present a scale-insensitive convolutional neural network (SINet) for fast detecting vehicles with a large variance of scales. First, we present a context-aware RoI pooling to maintain the contextual information and original structure of small scale objects. Second, we present a multi-branch decision network to minimize the intra-class distance of features. These lightweight techniques bring zero extra time complexity but prominent detection accuracy improvement. The proposed techniques can be equipped with any deep network architectures and keep them trained end-to-end. Our SINet achieves state-of-the-art performance in terms of accuracy and speed (up to 37 FPS) on the KITTI benchmark and a new highway dataset, which contains a large variance of scales and extremely small objects. 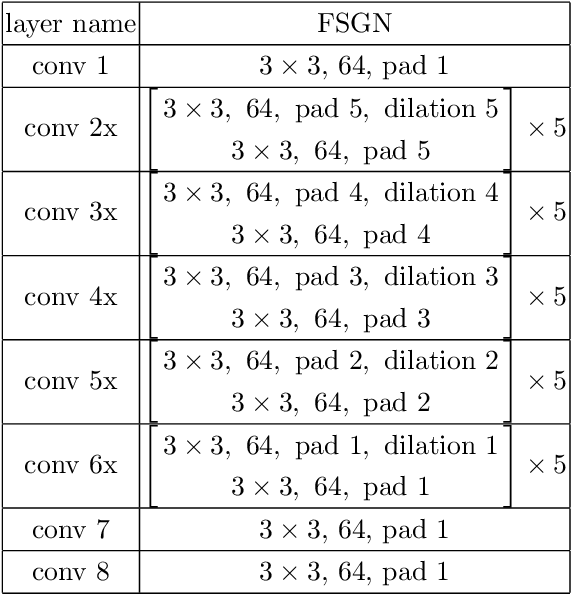 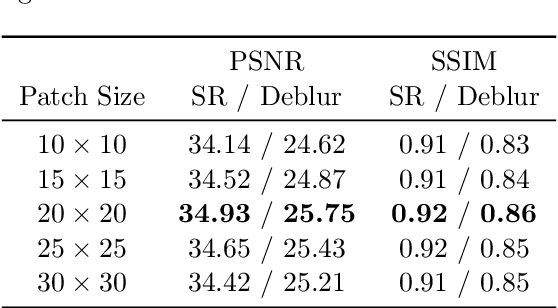 We address the problem of restoring a high-resolution face image from a blurry low-resolution input. This problem is difficult as super-resolution and deblurring need to be tackled simultaneously. Moreover, existing algorithms cannot handle face images well as low-resolution face images do not have much texture which is especially critical for deblurring. In this paper, we propose an effective algorithm by utilizing the domain-specific knowledge of human faces to recover high-quality faces. We first propose a facial component guided deep Convolutional Neural Network (CNN) to restore a coarse face image, which is denoted as the base image where the facial component is automatically generated from the input face image. However, the CNN based method cannot handle image details well. We further develop a novel exemplar-based detail enhancement algorithm via facial component matching. Extensive experiments show that the proposed method outperforms the state-of-the-art algorithms both quantitatively and qualitatively. 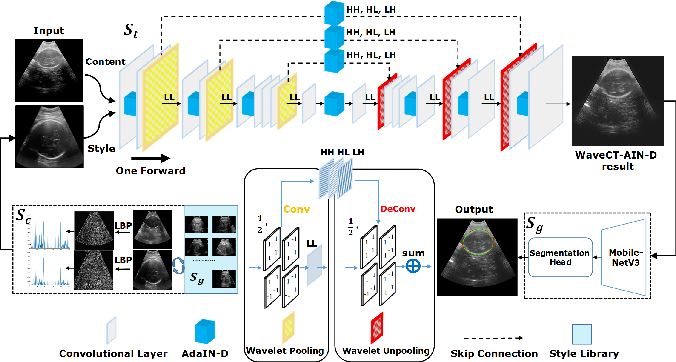 Deep Neural Networks (DNNs) suffer from the performance degradation when image appearance shift occurs, especially in ultrasound (US) image segmentation. In this paper, we propose a novel and intuitive framework to remove the appearance shift, and hence improve the generalization ability of DNNs. Our work has three highlights. First, we follow the spirit of universal style transfer to remove appearance shifts, which was not explored before for US images. Without sacrificing image structure details, it enables the arbitrary style-content transfer. Second, accelerated with Adaptive Instance Normalization block, our framework achieved real-time speed required in the clinical US scanning. Third, an efficient and effective style image selection strategy is proposed to ensure the target-style US image and testing content US image properly match each other. Experiments on two large US datasets demonstrate that our methods are superior to state-of-the-art methods on making DNNs robust against various appearance shifts.