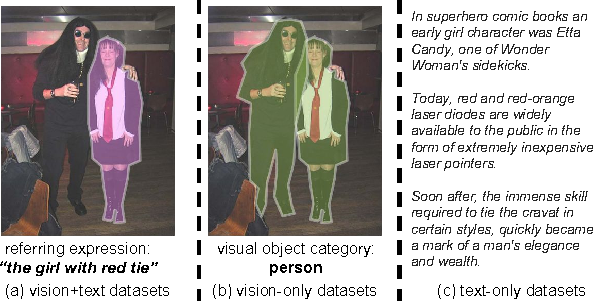 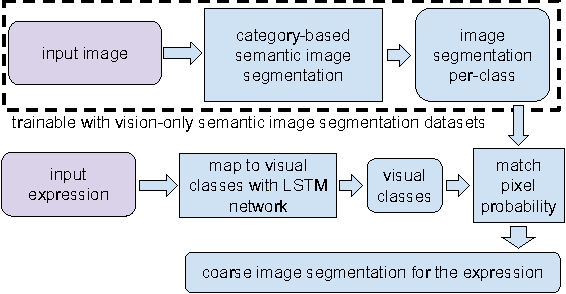 Image segmentation from referring expressions is a joint vision and language modeling task, where the input is an image and a textual expression describing a particular region in the image; and the goal is to localize and segment the specific image region based on the given expression. One major difficulty to train such language-based image segmentation systems is the lack of datasets with joint vision and text annotations. Although existing vision datasets such as MS COCO provide image captions, there are few datasets with region-level textual annotations for images, and these are often smaller in scale. In this paper, we explore how existing large scale vision-only and text-only datasets can be utilized to train models for image segmentation from referring expressions. We propose a method to address this problem, and show in experiments that our method can help this joint vision and language modeling task with vision-only and text-only data and outperforms previous results. 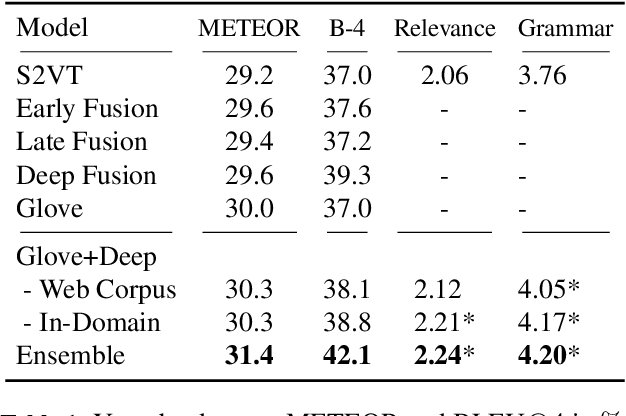 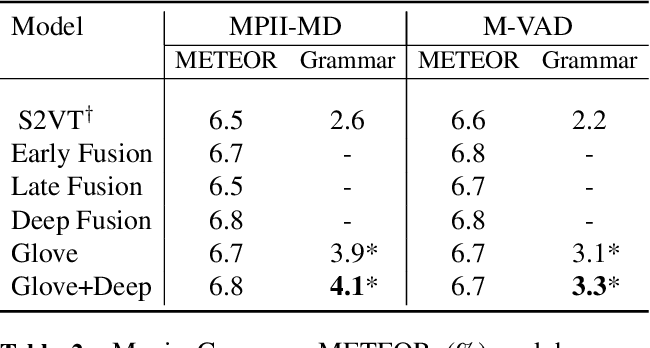 This paper investigates how linguistic knowledge mined from large text corpora can aid the generation of natural language descriptions of videos. Specifically, we integrate both a neural language model and distributional semantics trained on large text corpora into a recent LSTM-based architecture for video description. We evaluate our approach on a collection of Youtube videos as well as two large movie description datasets showing significant improvements in grammaticality while modestly improving descriptive quality. 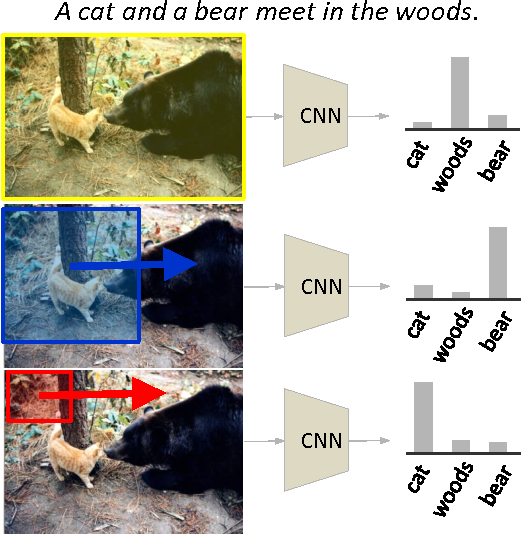 Generating natural language descriptions for in-the-wild videos is a challenging task. Most state-of-the-art methods for solving this problem borrow existing deep convolutional neural network (CNN) architectures (AlexNet, GoogLeNet) to extract a visual representation of the input video. However, these deep CNN architectures are designed for single-label centered-positioned object classification. While they generate strong semantic features, they have no inherent structure allowing them to detect multiple objects of different sizes and locations in the frame. Our paper tries to solve this problem by integrating the base CNN into several fully convolutional neural networks (FCNs) to form a multi-scale network that handles multiple receptive field sizes in the original image. FCNs, previously applied to image segmentation, can generate class heat-maps efficiently compared to sliding window mechanisms, and can easily handle multiple scales. To further handle the ambiguity over multiple objects and locations, we incorporate the Multiple Instance Learning mechanism (MIL) to consider objects in different positions and at different scales simultaneously. We integrate our multi-scale multi-instance architecture with a sequence-to-sequence recurrent neural network to generate sentence descriptions based on the visual representation. Ours is the first end-to-end trainable architecture that is capable of multi-scale region processing. Evaluation on a Youtube video dataset shows the advantage of our approach compared to the original single-scale whole frame CNN model. Our flexible and efficient architecture can potentially be extended to support other video processing tasks.


* ICCV15 workshop on Closing the Loop Between Vision and Language

Sequence to Sequence -- Video to Text 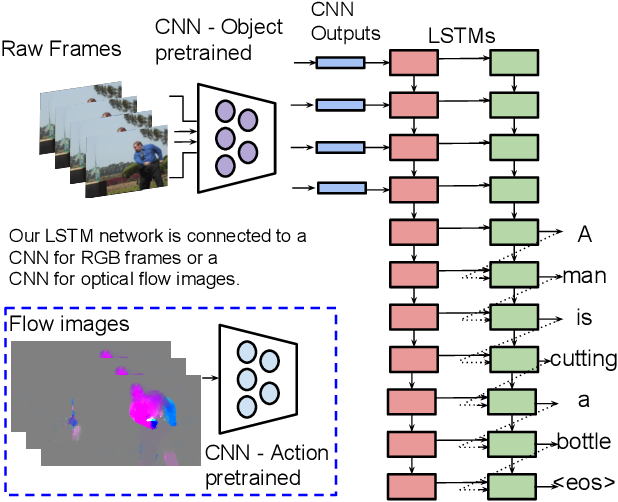 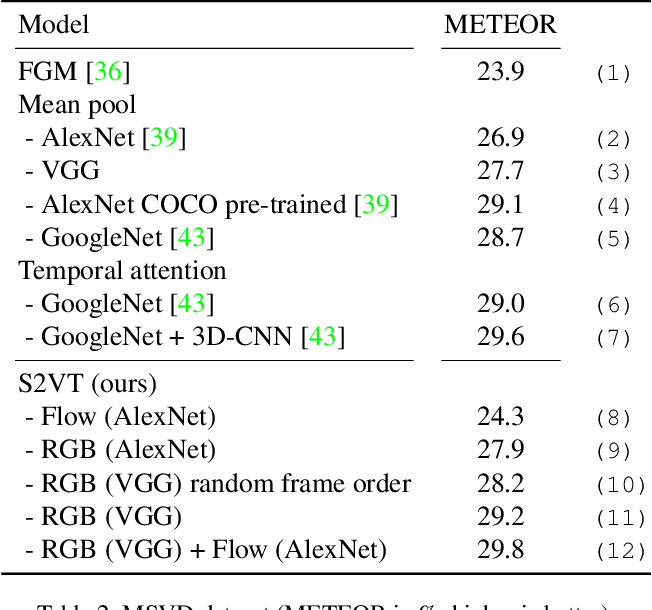 Real-world videos often have complex dynamics; and methods for generating open-domain video descriptions should be sensitive to temporal structure and allow both input (sequence of frames) and output (sequence of words) of variable length. To approach this problem, we propose a novel end-to-end sequence-to-sequence model to generate captions for videos. For this we exploit recurrent neural networks, specifically LSTMs, which have demonstrated state-of-the-art performance in image caption generation. Our LSTM model is trained on video-sentence pairs and learns to associate a sequence of video frames to a sequence of words in order to generate a description of the event in the video clip. Our model naturally is able to learn the temporal structure of the sequence of frames as well as the sequence model of the generated sentences, i.e. a language model. We evaluate several variants of our model that exploit different visual features on a standard set of YouTube videos and two movie description datasets (M-VAD and MPII-MD). 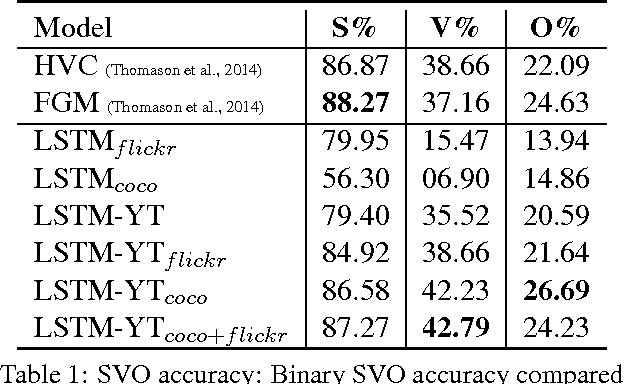 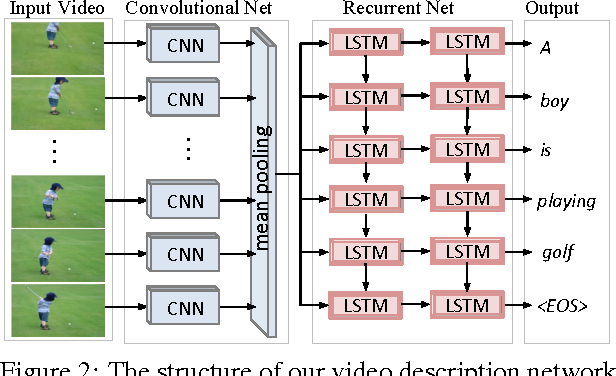 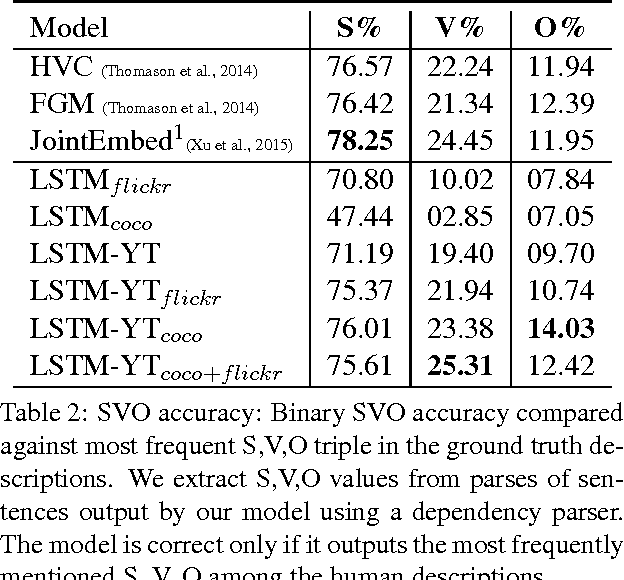 Solving the visual symbol grounding problem has long been a goal of artificial intelligence. The field appears to be advancing closer to this goal with recent breakthroughs in deep learning for natural language grounding in static images. In this paper, we propose to translate videos directly to sentences using a unified deep neural network with both convolutional and recurrent structure. Described video datasets are scarce, and most existing methods have been applied to toy domains with a small vocabulary of possible words. By transferring knowledge from 1.2M+ images with category labels and 100,000+ images with captions, our method is able to create sentence descriptions of open-domain videos with large vocabularies. We compare our approach with recent work using language generation metrics, subject, verb, and object prediction accuracy, and a human evaluation. 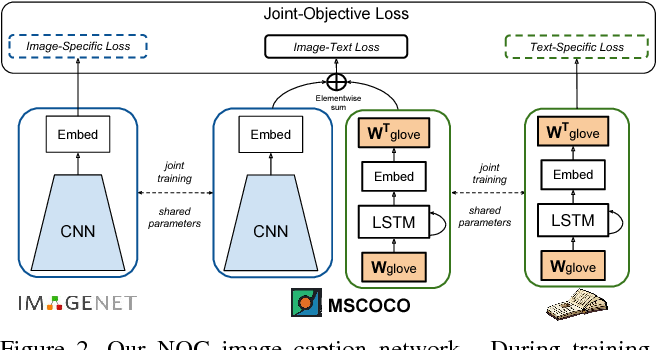 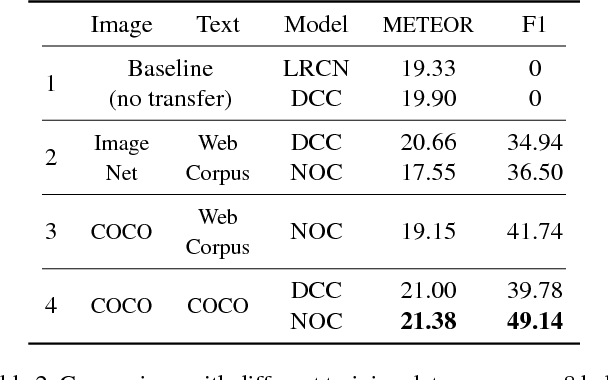 Recent captioning models are limited in their ability to scale and describe concepts unseen in paired image-text corpora. We propose the Novel Object Captioner (NOC), a deep visual semantic captioning model that can describe a large number of object categories not present in existing image-caption datasets. Our model takes advantage of external sources -- labeled images from object recognition datasets, and semantic knowledge extracted from unannotated text. We propose minimizing a joint objective which can learn from these diverse data sources and leverage distributional semantic embeddings, enabling the model to generalize and describe novel objects outside of image-caption datasets. We demonstrate that our model exploits semantic information to generate captions for hundreds of object categories in the ImageNet object recognition dataset that are not observed in MSCOCO image-caption training data, as well as many categories that are observed very rarely. Both automatic evaluations and human judgements show that our model considerably outperforms prior work in being able to describe many more categories of objects. 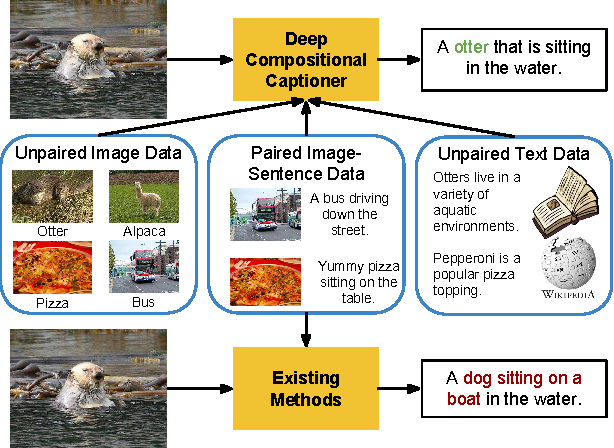 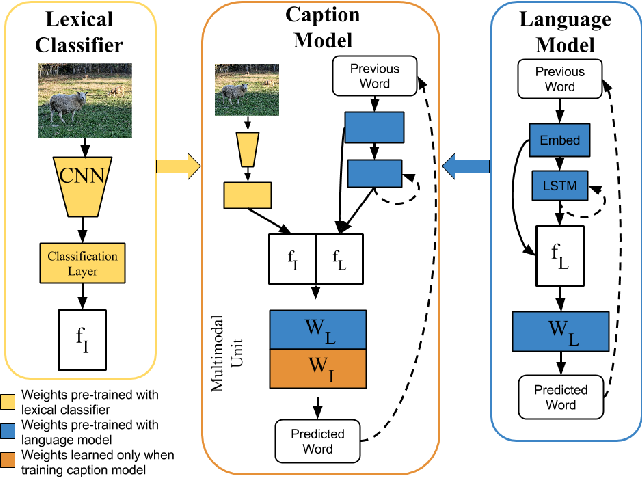 While recent deep neural network models have achieved promising results on the image captioning task, they rely largely on the availability of corpora with paired image and sentence captions to describe objects in context. In this work, we propose the Deep Compositional Captioner (DCC) to address the task of generating descriptions of novel objects which are not present in paired image-sentence datasets. Our method achieves this by leveraging large object recognition datasets and external text corpora and by transferring knowledge between semantically similar concepts. Current deep caption models can only describe objects contained in paired image-sentence corpora, despite the fact that they are pre-trained with large object recognition datasets, namely ImageNet. In contrast, our model can compose sentences that describe novel objects and their interactions with other objects. We demonstrate our model's ability to describe novel concepts by empirically evaluating its performance on MSCOCO and show qualitative results on ImageNet images of objects for which no paired image-caption data exist. Further, we extend our approach to generate descriptions of objects in video clips. Our results show that DCC has distinct advantages over existing image and video captioning approaches for generating descriptions of new objects in context. 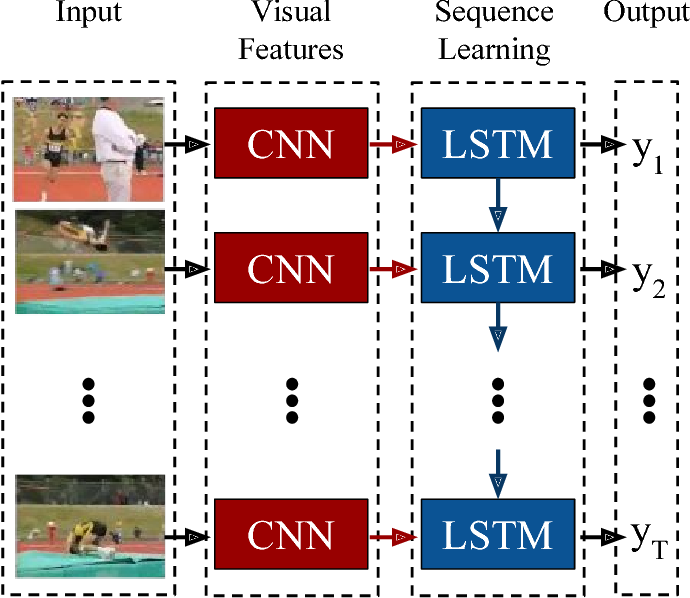 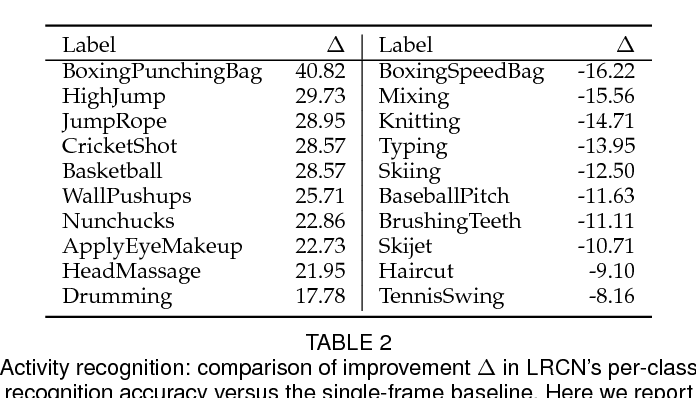 Models based on deep convolutional networks have dominated recent image interpretation tasks; we investigate whether models which are also recurrent, or "temporally deep", are effective for tasks involving sequences, visual and otherwise. We develop a novel recurrent convolutional architecture suitable for large-scale visual learning which is end-to-end trainable, and demonstrate the value of these models on benchmark video recognition tasks, image description and retrieval problems, and video narration challenges. In contrast to current models which assume a fixed spatio-temporal receptive field or simple temporal averaging for sequential processing, recurrent convolutional models are "doubly deep"' in that they can be compositional in spatial and temporal "layers". Such models may have advantages when target concepts are complex and/or training data are limited. Learning long-term dependencies is possible when nonlinearities are incorporated into the network state updates. Long-term RNN models are appealing in that they directly can map variable-length inputs (e.g., video frames) to variable length outputs (e.g., natural language text) and can model complex temporal dynamics; yet they can be optimized with backpropagation. Our recurrent long-term models are directly connected to modern visual convnet models and can be jointly trained to simultaneously learn temporal dynamics and convolutional perceptual representations. Our results show such models have distinct advantages over state-of-the-art models for recognition or generation which are separately defined and/or optimized.

It's easy to fool yourself: Case studies on identifying bias and confounding in bio-medical datasets

Confounding variables are a well known source of nuisance in biomedical studies. They present an even greater challenge when we combine them with black-box machine learning techniques that operate on raw data. This work presents two case studies. In one, we discovered biases arising from systematic errors in the data generation process. In the other, we found a spurious source of signal unrelated to the prediction task at hand. In both cases, our prediction models performed well but under careful examination hidden confounders and biases were revealed. These are cautionary tales on the limits of using machine learning techniques on raw data from scientific experiments. 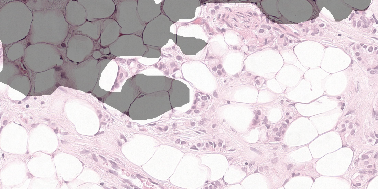 Each year, the treatment decisions for more than 230,000 breast cancer patients in the U.S. hinge on whether the cancer has metastasized away from the breast. Metastasis detection is currently performed by pathologists reviewing large expanses of biological tissues. This process is labor intensive and error-prone. We present a framework to automatically detect and localize tumors as small as 100 x 100 pixels in gigapixel microscopy images sized 100,000 x 100,000 pixels. Our method leverages a convolutional neural network (CNN) architecture and obtains state-of-the-art results on the Camelyon16 dataset in the challenging lesion-level tumor detection task. At 8 false positives per image, we detect 92.4% of the tumors, relative to 82.7% by the previous best automated approach. For comparison, a human pathologist attempting exhaustive search achieved 73.2% sensitivity. We achieve image-level AUC scores above 97% on both the Camelyon16 test set and an independent set of 110 slides. In addition, we discover that two slides in the Camelyon16 training set were erroneously labeled normal. Our approach could considerably reduce false negative rates in metastasis detection. 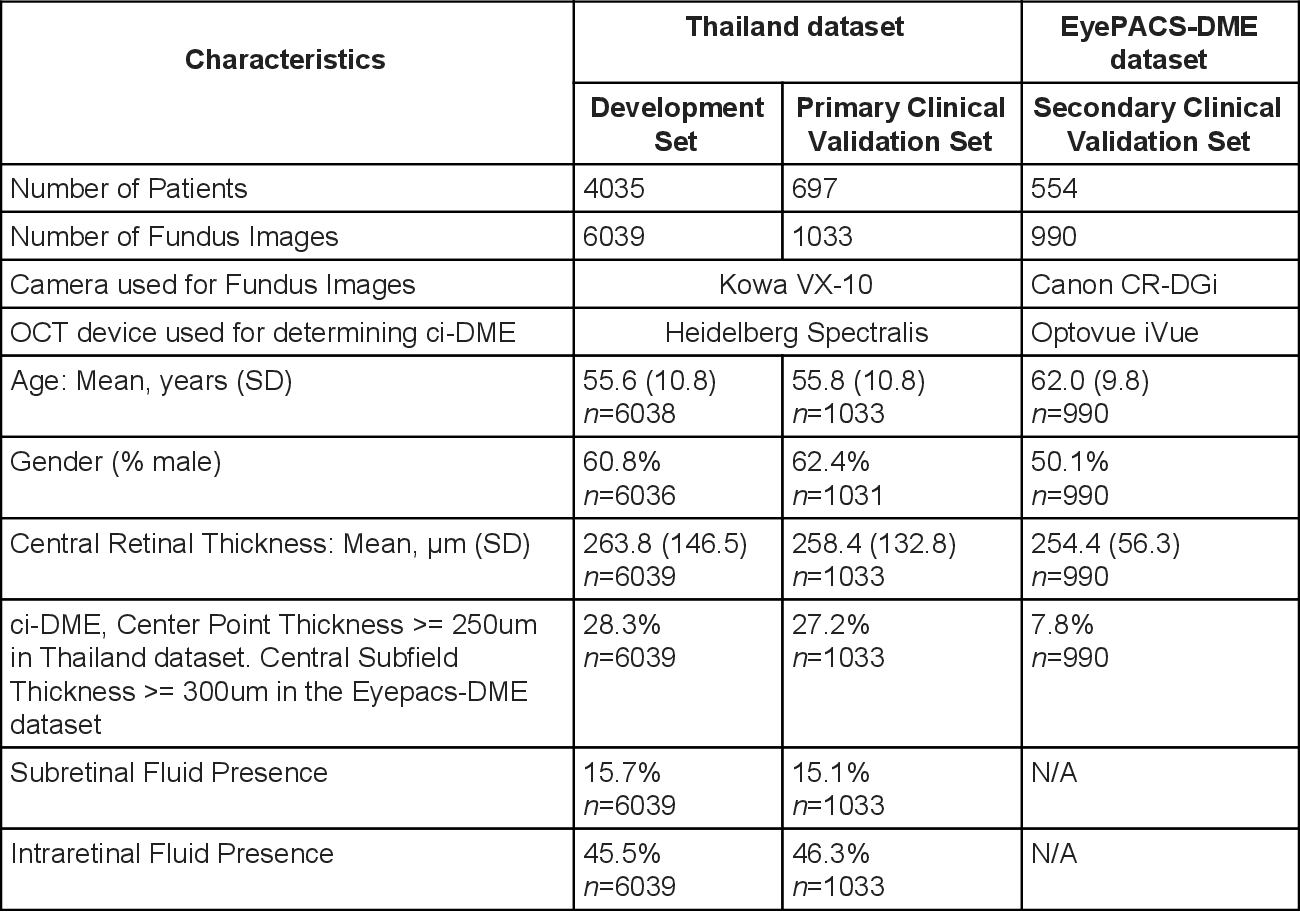 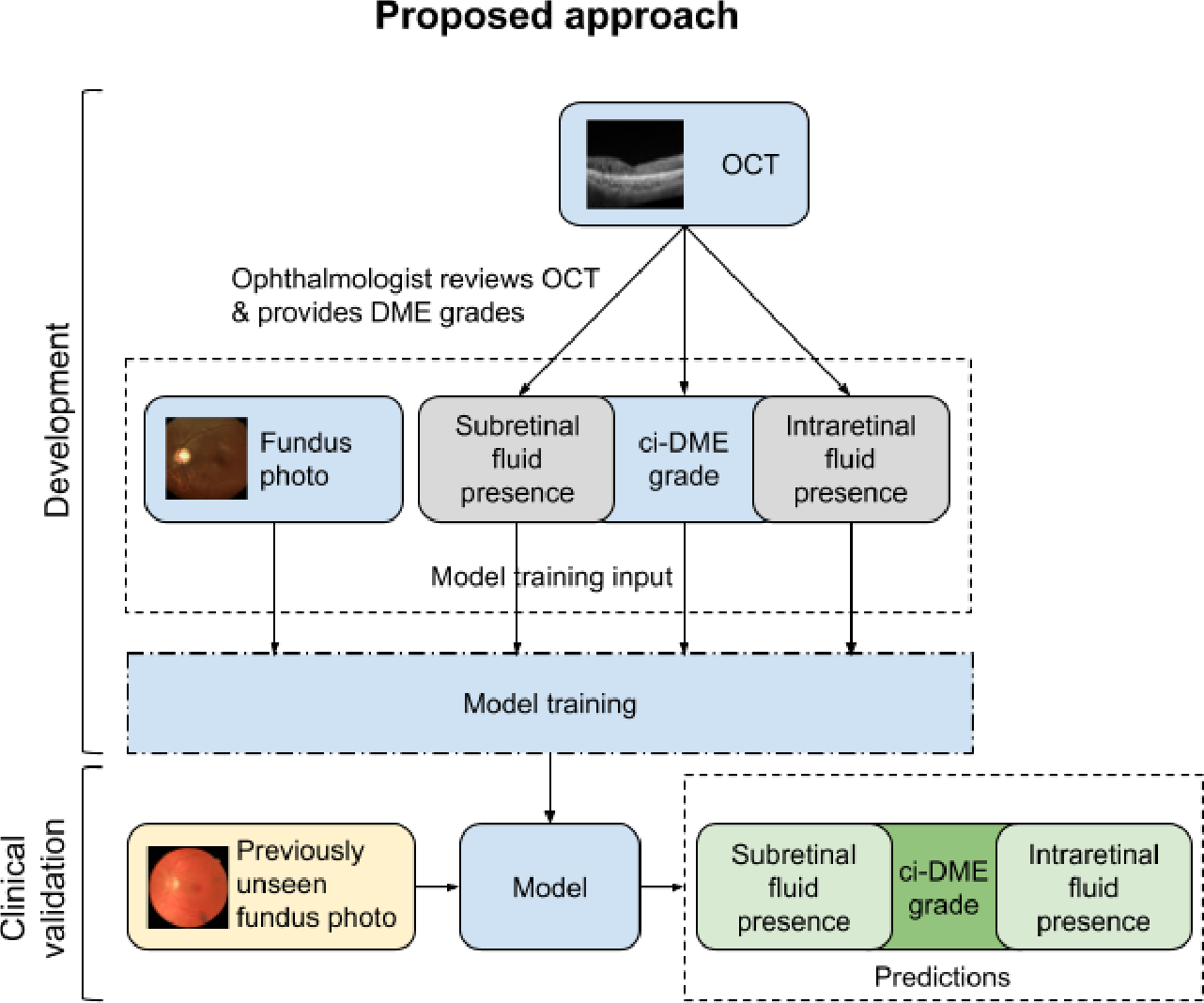 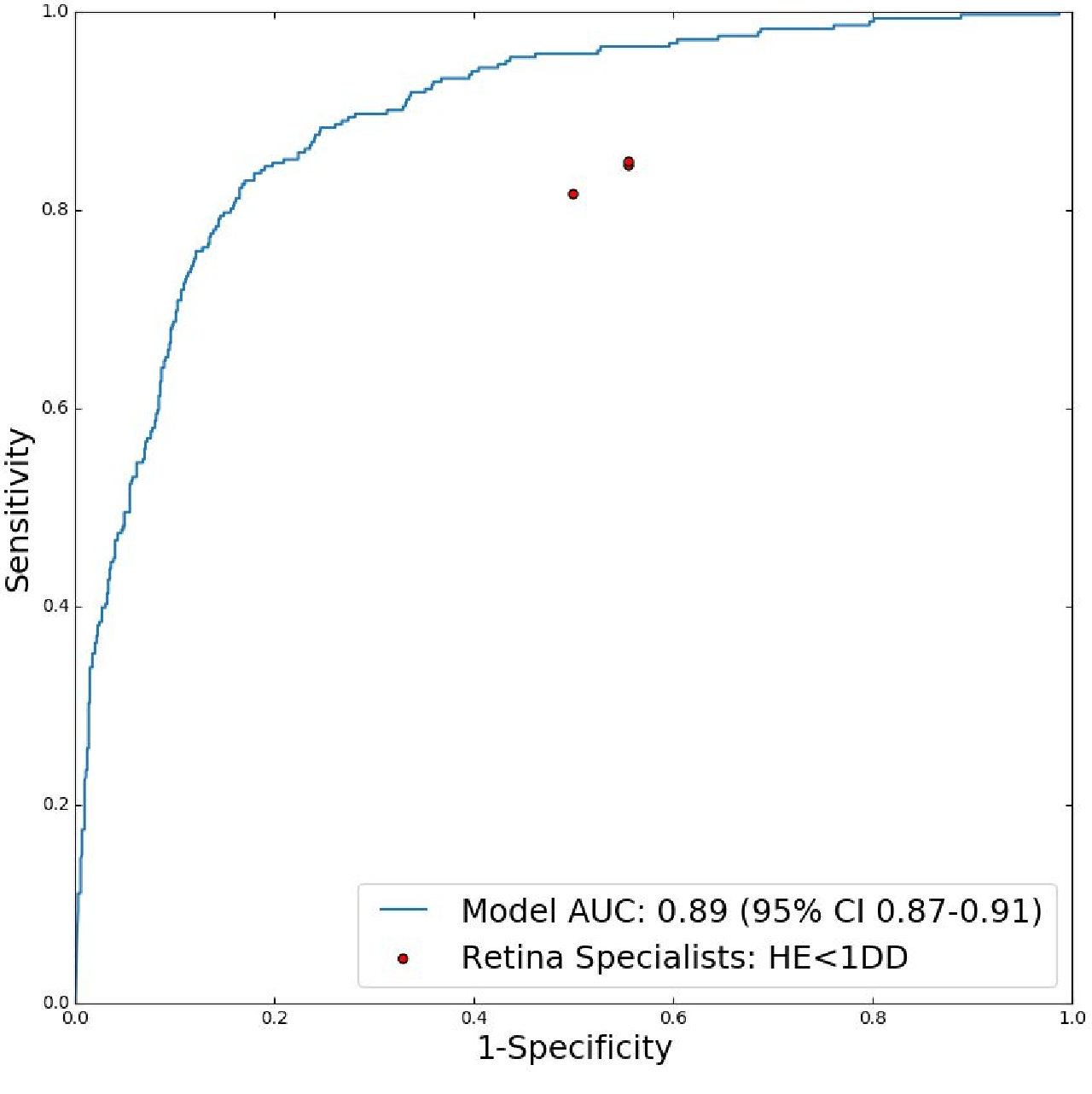 Diabetic eye disease is one of the fastest growing causes of preventable blindness. With the advent of anti-VEGF (vascular endothelial growth factor) therapies, it has become increasingly important to detect center-involved diabetic macular edema. However, center-involved diabetic macular edema is diagnosed using optical coherence tomography (OCT), which is not generally available at screening sites because of cost and workflow constraints. Instead, screening programs rely on the detection of hard exudates as a proxy for DME on color fundus photographs, often resulting in high false positive or false negative calls. To improve the accuracy of DME screening, we trained a deep learning model to use color fundus photographs to predict DME grades derived from OCT exams. Our "OCT-DME" model had an AUC of 0.89 (95% CI: 0.87-0.91), which corresponds to a sensitivity of 85% at a specificity of 80%. In comparison, three retinal specialists had similar sensitivities (82-85%), but only half the specificity (45-50%, p<0.001 for each comparison with model). The positive predictive value (PPV) of the OCT-DME model was 61% (95% CI: 56-66%), approximately double the 36-38% by the retina specialists. In addition, we used saliency and other techniques to examine how the model is making its prediction. The ability of deep learning algorithms to make clinically relevant predictions that generally require sophisticated 3D-imaging equipment from simple 2D images has broad relevance to many other applications in medical imaging.