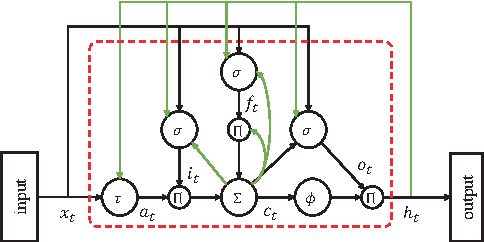 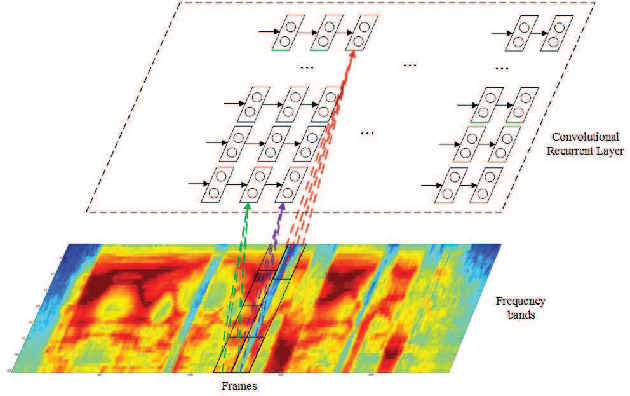 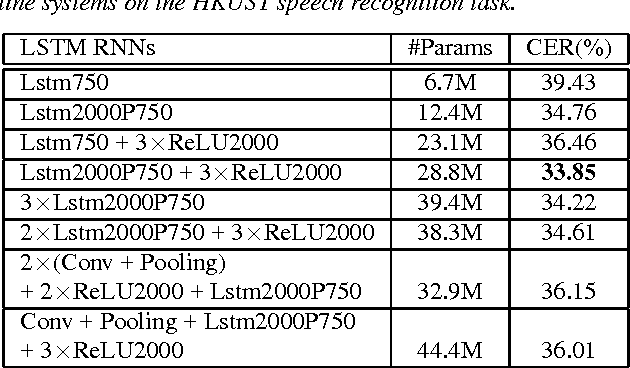 Long short-term memory (LSTM) recurrent neural networks (RNNs) have been shown to give state-of-the-art performance on many speech recognition tasks, as they are able to provide the learned dynamically changing contextual window of all sequence history. On the other hand, the convolutional neural networks (CNNs) have brought significant improvements to deep feed-forward neural networks (FFNNs), as they are able to better reduce spectral variation in the input signal. In this paper, a network architecture called as convolutional recurrent neural network (CRNN) is proposed by combining the CNN and LSTM RNN. In the proposed CRNNs, each speech frame, without adjacent context frames, is organized as a number of local feature patches along the frequency axis, and then a LSTM network is performed on each feature patch along the time axis. We train and compare FFNNs, LSTM RNNs and the proposed LSTM CRNNs at various number of configurations. Experimental results show that the LSTM CRNNs can exceed state-of-the-art speech recognition performance. 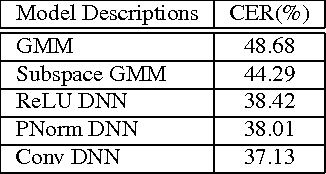 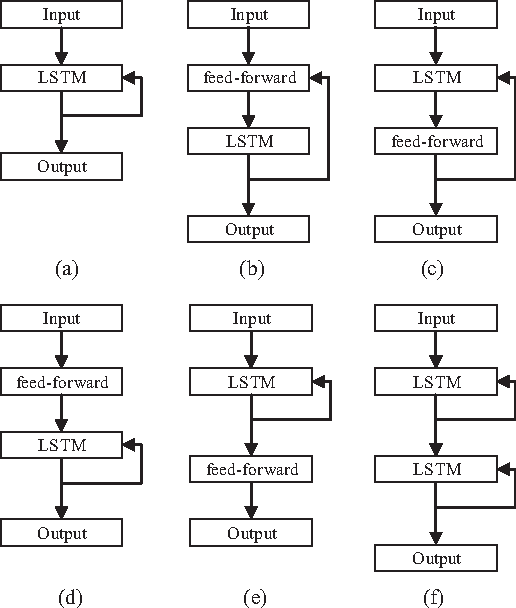 Long short-term memory (LSTM) based acoustic modeling methods have recently been shown to give state-of-the-art performance on some speech recognition tasks. To achieve a further performance improvement, in this research, deep extensions on LSTM are investigated considering that deep hierarchical model has turned out to be more efficient than a shallow one. Motivated by previous research on constructing deep recurrent neural networks (RNNs), alternative deep LSTM architectures are proposed and empirically evaluated on a large vocabulary conversational telephone speech recognition task. Meanwhile, regarding to multi-GPU devices, the training process for LSTM networks is introduced and discussed. Experimental results demonstrate that the deep LSTM networks benefit from the depth and yield the state-of-the-art performance on this task.


* submitted to ICASSP 2015 which does not perform blind reviews 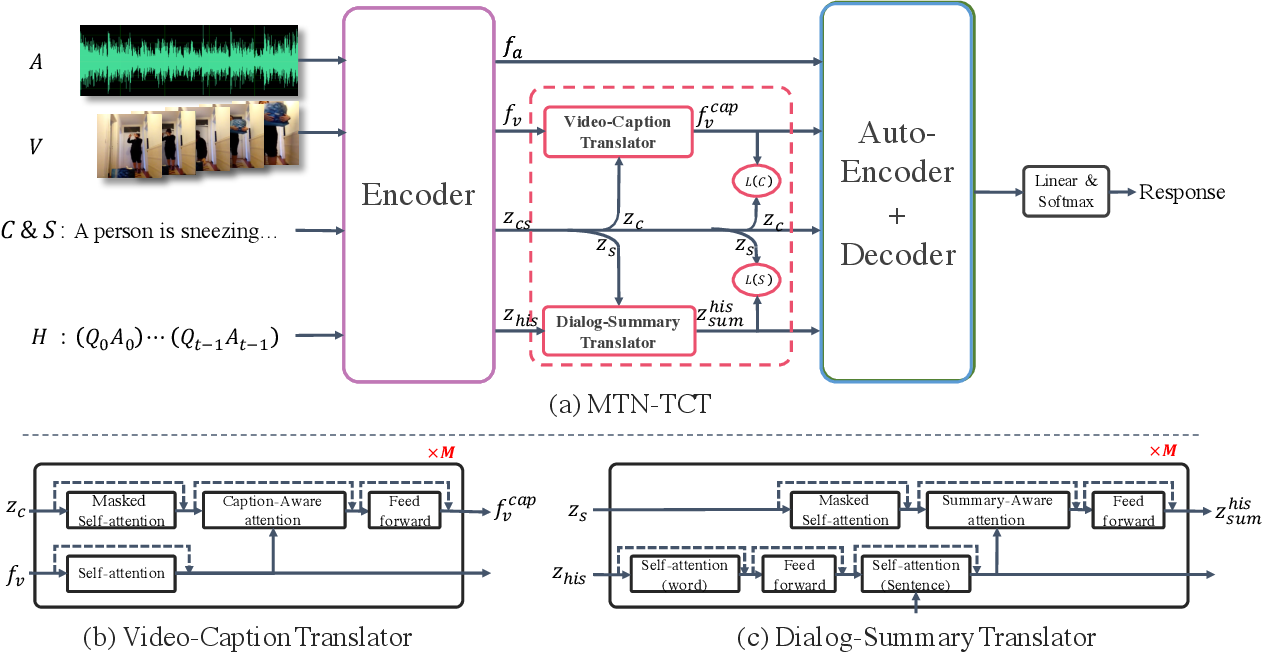 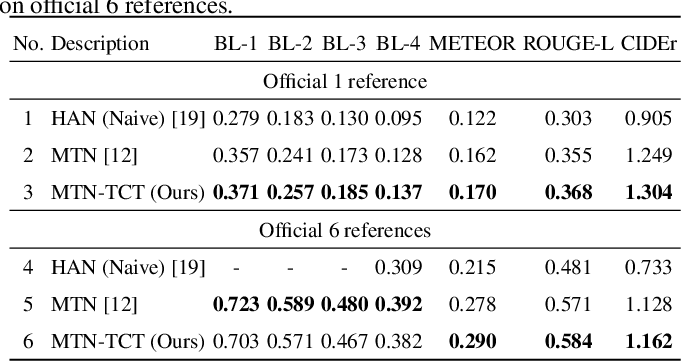 Multimodalities provide promising performance than unimodality in most tasks. However, learning the semantic of the representations from multimodalities efficiently is extremely challenging. To tackle this, we propose the Transformer based Cross-modal Translator (TCT) to learn unimodal sequence representations by translating from other related multimodal sequences on a supervised learning method. Combined TCT with Multimodal Transformer Network (MTN), we evaluate MTN-TCT on the video-grounded dialogue which uses multimodality. The proposed method reports new state-of-the-art performance on video-grounded dialogue which indicates representations learned by TCT are more semantics compared to directly use unimodality. 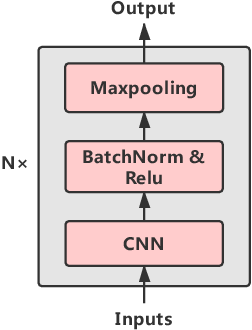 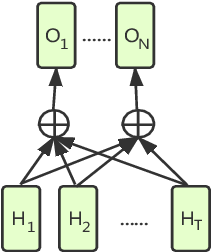 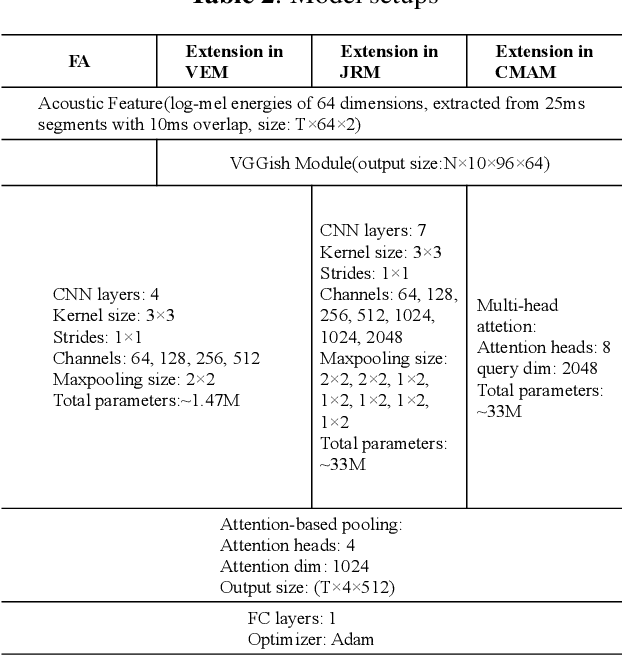 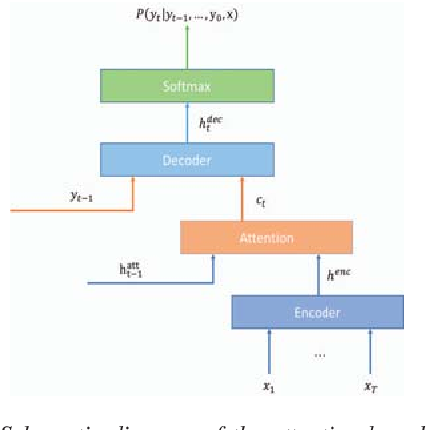 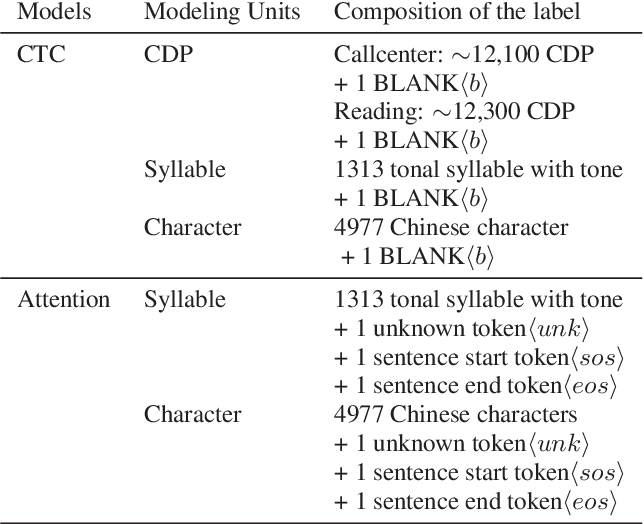 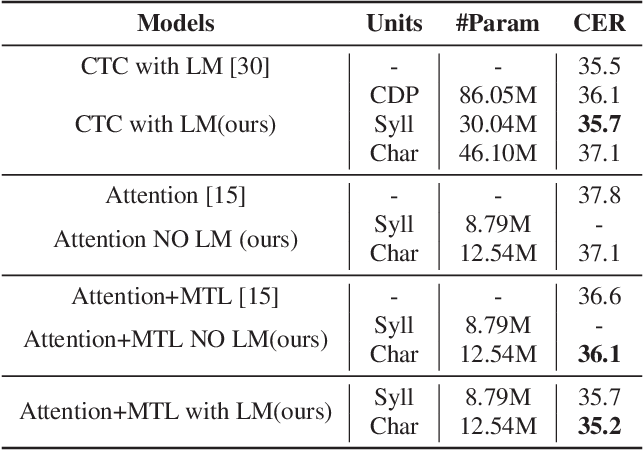 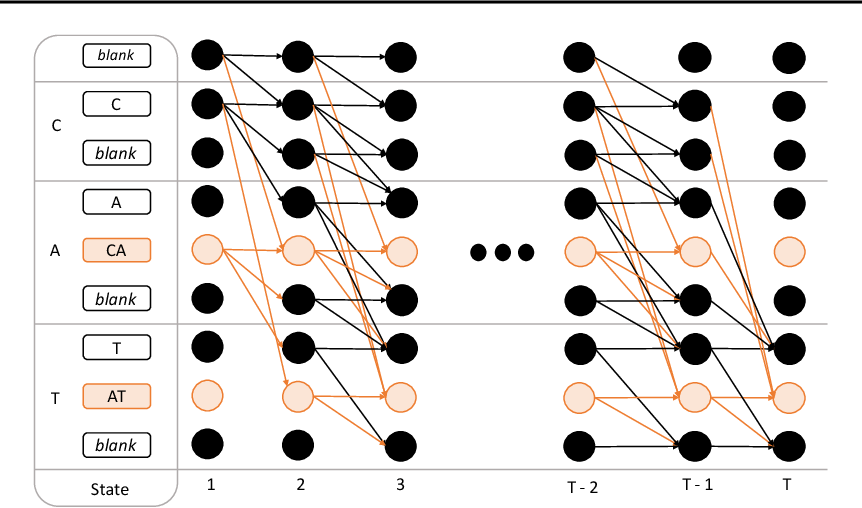 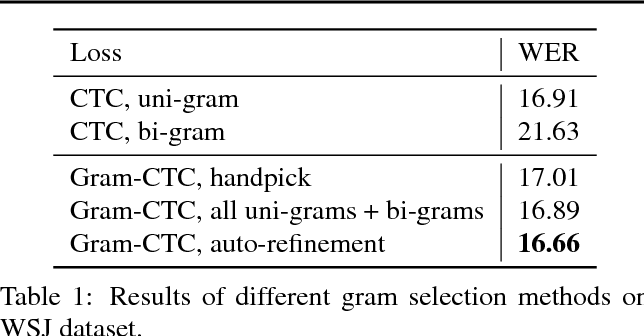 Most existing sequence labelling models rely on a fixed decomposition of a target sequence into a sequence of basic units. These methods suffer from two major drawbacks: 1) the set of basic units is fixed, such as the set of words, characters or phonemes in speech recognition, and 2) the decomposition of target sequences is fixed. These drawbacks usually result in sub-optimal performance of modeling sequences. In this pa- per, we extend the popular CTC loss criterion to alleviate these limitations, and propose a new loss function called Gram-CTC. While preserving the advantages of CTC, Gram-CTC automatically learns the best set of basic units (grams), as well as the most suitable decomposition of tar- get sequences. Unlike CTC, Gram-CTC allows the model to output variable number of characters at each time step, which enables the model to capture longer term dependency and improves the computational efficiency. We demonstrate that the proposed Gram-CTC improves CTC in terms of both performance and efficiency on the large vocabulary speech recognition task at multiple scales of data, and that with Gram-CTC we can outperform the state-of-the-art on a standard speech benchmark. 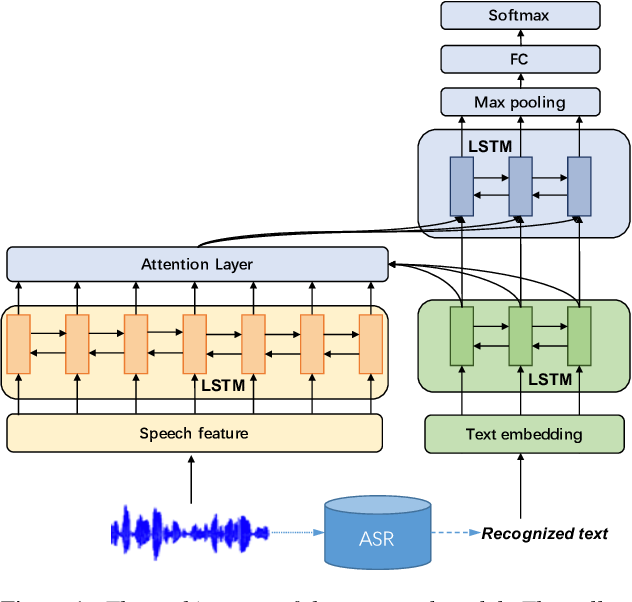 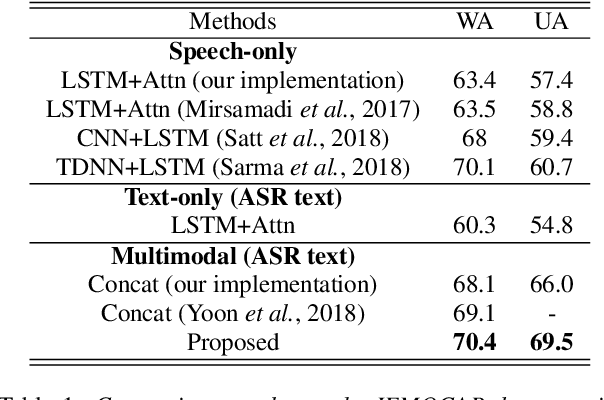 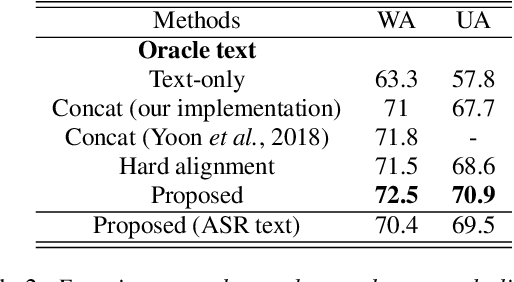 Speech emotion recognition is a challenging problem because human convey emotions in subtle and complex ways. For emotion recognition on human speech, one can either extract emotion related features from audio signals or employ speech recognition techniques to generate text from speech and then apply natural language processing to analyze the sentiment. Further, emotion recognition will be beneficial from using audio-textual multimodal information, it is not trivial to build a system to learn from multimodality. One can build models for two input sources separately and combine them in a decision level, but this method ignores the interaction between speech and text in the temporal domain. In this paper, we propose to use an attention mechanism to learn the alignment between speech frames and text words, aiming to produce more accurate multimodal feature representations. The aligned multimodal features are fed into a sequential model for emotion recognition. We evaluate the approach on the IEMOCAP dataset and the experimental results show the proposed approach achieves the state-of-the-art performance on the dataset. 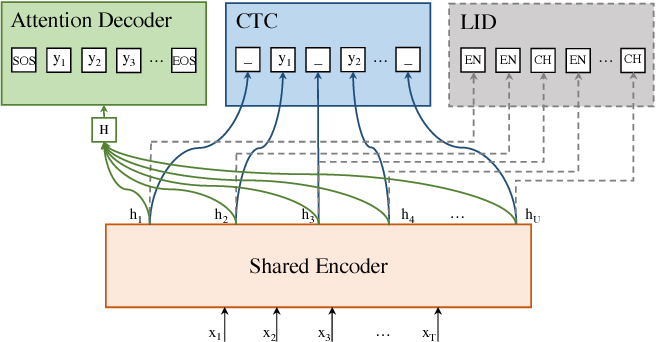 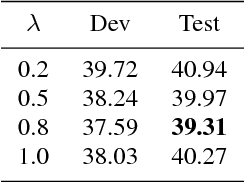 Code-switching speech recognition has attracted an increasing interest recently, but the need for expert linguistic knowledge has always been a big issue. End-to-end automatic speech recognition (ASR) simplifies the building of ASR systems considerably by predicting graphemes or characters directly from acoustic input. In the mean time, the need of expert linguistic knowledge is also eliminated, which makes it an attractive choice for code-switching ASR. This paper presents a hybrid CTC-Attention based end-to-end Mandarin-English code-switching (CS) speech recognition system and studies the effect of hybrid CTC-Attention based models, different modeling units, the inclusion of language identification and different decoding strategies on the task of code-switching ASR. On the SEAME corpus, our system achieves a mixed error rate (MER) of 34.24%. 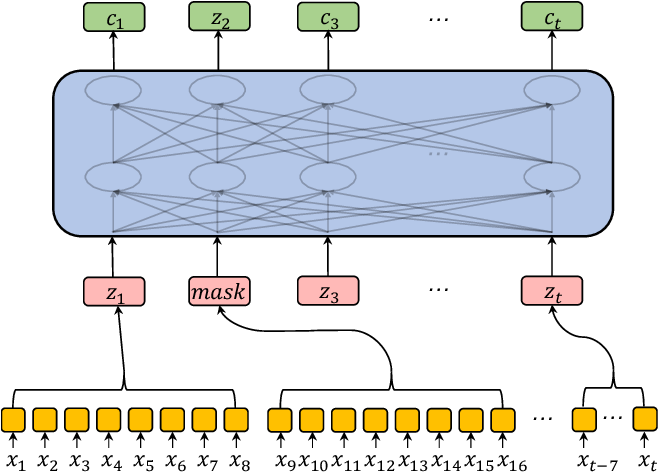 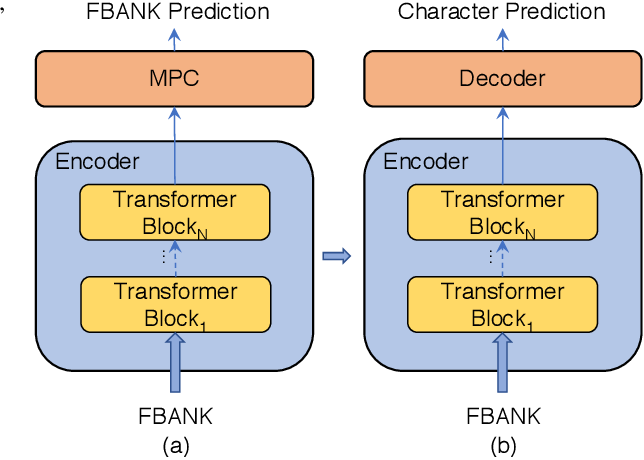 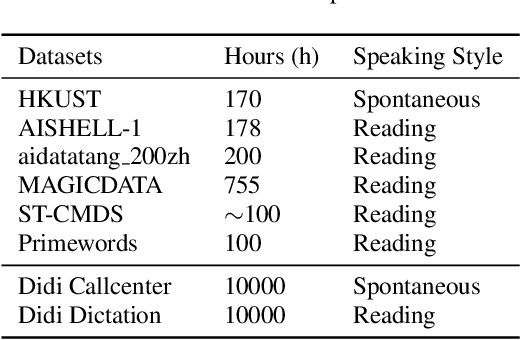 Speech recognition technologies are gaining enormous popularity in various industrial applications. However, building a good speech recognition system usually requires large amounts of transcribed data, which is expensive to collect. To tackle this problem, an unsupervised pre-training method called Masked Predictive Coding is proposed, which can be applied for unsupervised pre-training with Transformer based model. Experiments on HKUST show that using the same training data, we can achieve CER 23.3%, exceeding the best end-to-end model by over 0.2% absolute CER. With more pre-training data, we can further reduce the CER to 21.0%, or a 11.8% relative CER reduction over baseline. 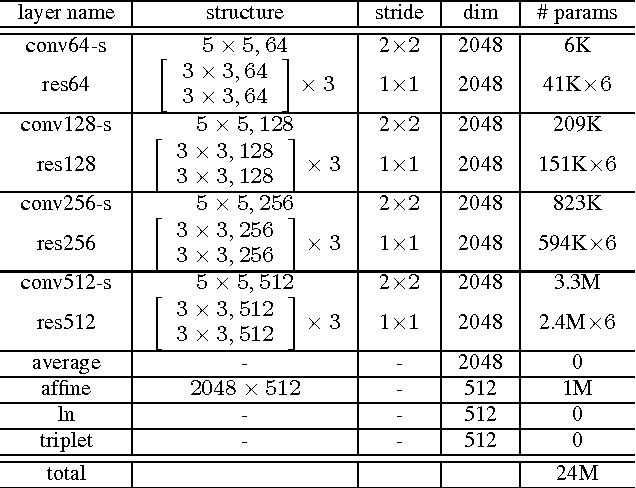 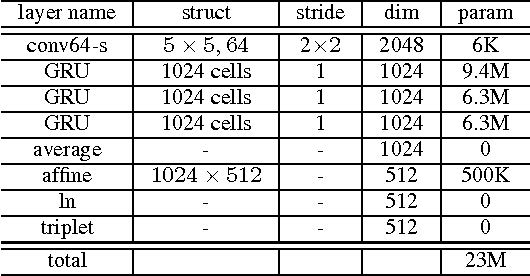 We present Deep Speaker, a neural speaker embedding system that maps utterances to a hypersphere where speaker similarity is measured by cosine similarity. The embeddings generated by Deep Speaker can be used for many tasks, including speaker identification, verification, and clustering. We experiment with ResCNN and GRU architectures to extract the acoustic features, then mean pool to produce utterance-level speaker embeddings, and train using triplet loss based on cosine similarity. Experiments on three distinct datasets suggest that Deep Speaker outperforms a DNN-based i-vector baseline. For example, Deep Speaker reduces the verification equal error rate by 50% (relatively) and improves the identification accuracy by 60% (relatively) on a text-independent dataset. We also present results that suggest adapting from a model trained with Mandarin can improve accuracy for English speaker recognition. 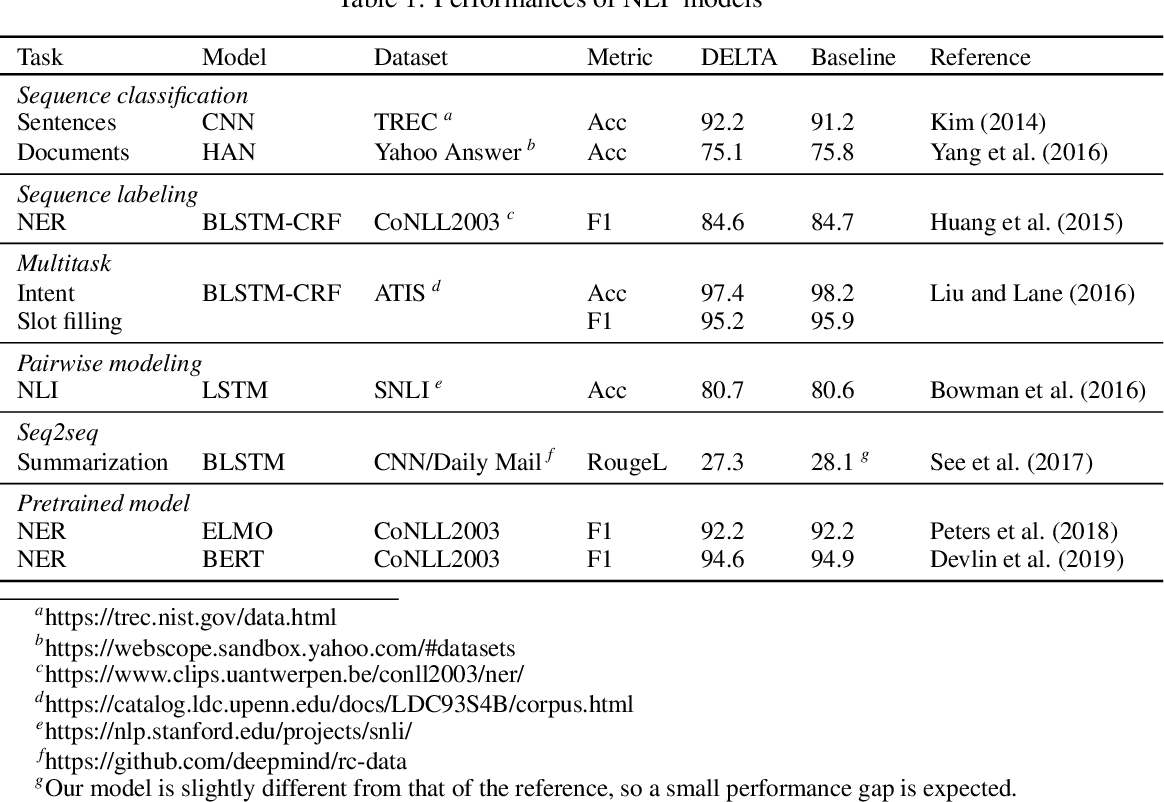 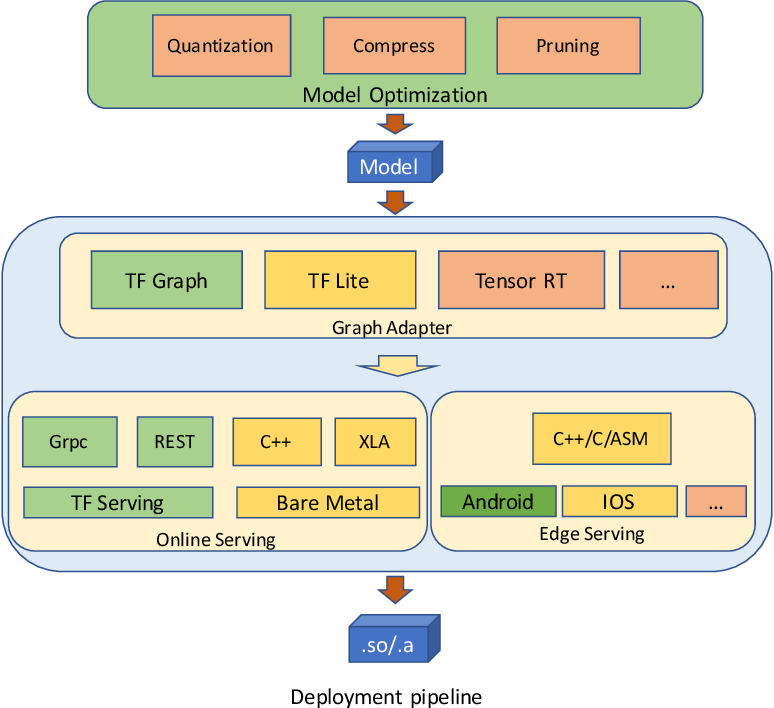 In this paper we present DELTA, a deep learning based language technology platform. DELTA is an end-to-end platform designed to solve industry level natural language and speech processing problems. It integrates most popular neural network models for training as well as comprehensive deployment tools for production. DELTA aims to provide easy and fast experiences for using, deploying, and developing natural language processing and speech models for both academia and industry use cases. We demonstrate the reliable performance with DELTA on several natural language processing and speech tasks, including text classification, named entity recognition, natural language inference, speech recognition, speaker verification, etc. DELTA has been used for developing several state-of-the-art algorithms for publications and delivering real production to serve millions of users.