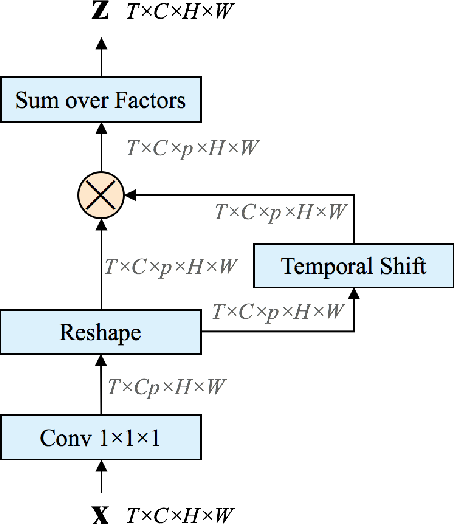 Temporal modeling in videos is a fundamental yet challenging problem in computer vision. In this paper, we propose a novel Temporal Bilinear (TB) model to capture the temporal pairwise feature interactions between adjacent frames. Compared with some existing temporal methods which are limited in linear transformations, our TB model considers explicit quadratic bilinear transformations in the temporal domain for motion evolution and sequential relation modeling. We further leverage the factorized bilinear model in linear complexity and a bottleneck network design to build our TB blocks, which also constrains the parameters and computation cost. We consider two schemes in terms of the incorporation of TB blocks and the original 2D spatial convolutions, namely wide and deep Temporal Bilinear Networks (TBN). Finally, we perform experiments on several widely adopted datasets including Kinetics, UCF101 and HMDB51. The effectiveness of our TBNs is validated by comprehensive ablation analyses and comparisons with various state-of-the-art methods. 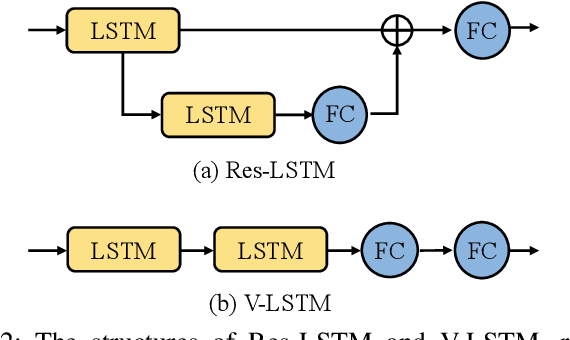 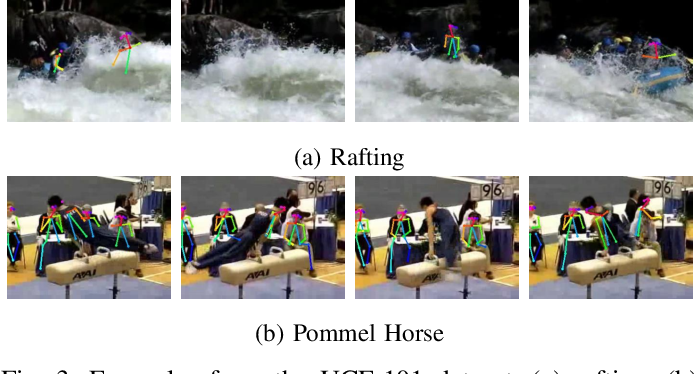 With the prevalence of RGB-D cameras, multi-modal video data have become more available for human action recognition. One main challenge for this task lies in how to effectively leverage their complementary information. In this work, we propose a Modality Compensation Network (MCN) to explore the relationships of different modalities, and boost the representations for human action recognition. We regard RGB/optical flow videos as source modalities, skeletons as auxiliary modality. Our goal is to extract more discriminative features from source modalities, with the help of auxiliary modality. Built on deep Convolutional Neural Networks (CNN) and Long Short Term Memory (LSTM) networks, our model bridges data from source and auxiliary modalities by a modality adaptation block to achieve adaptive representation learning, that the network learns to compensate for the loss of skeletons at test time and even at training time. We explore multiple adaptation schemes to narrow the distance between source and auxiliary modal distributions from different levels, according to the alignment of source and auxiliary data in training. In addition, skeletons are only required in the training phase. Our model is able to improve the recognition performance with source data when testing. Experimental results reveal that MCN outperforms state-of-the-art approaches on four widely-used action recognition benchmarks. 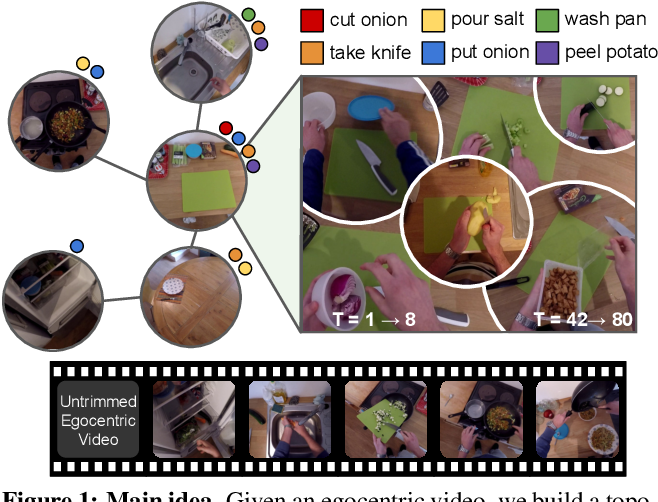 First-person video naturally brings the use of a physical environment to the forefront, since it shows the camera wearer interacting fluidly in a space based on his intentions. However, current methods largely separate the observed actions from the persistent space itself. We introduce a model for environment affordances that is learned directly from egocentric video. The main idea is to gain a human-centric model of a physical space (such as a kitchen) that captures (1) the primary spatial zones of interaction and (2) the likely activities they support. Our approach decomposes a space into a topological map derived from first-person activity, organizing an ego-video into a series of visits to the different zones. Further, we show how to link zones across multiple related environments (e.g., from videos of multiple kitchens) to obtain a consolidated representation of environment functionality. On EPIC-Kitchens and EGTEA+, we demonstrate our approach for learning scene affordances and anticipating future actions in long-form video.

Scale variation is one of the key challenges in object detection. In this work, we first present a controlled experiment to investigate the effect of receptive fields on the detection of different scale objects. Based on the findings from the exploration experiments, we propose a novel Trident Network (TridentNet) aiming to generate scale-specific feature maps with a uniform representational power. We construct a parallel multi-branch architecture in which each branch shares the same transformation parameters but with different receptive fields. Then, we propose a scale-aware training scheme to specialize each branch by sampling object instances of proper scales for training. As a bonus, a fast approximation version of TridentNet could achieve significant improvements without any additional parameters and computational cost. On the COCO dataset, our TridentNet with ResNet-101 backbone achieves state-of-the-art single-model results by obtaining an mAP of 48.4. Code will be made publicly available. 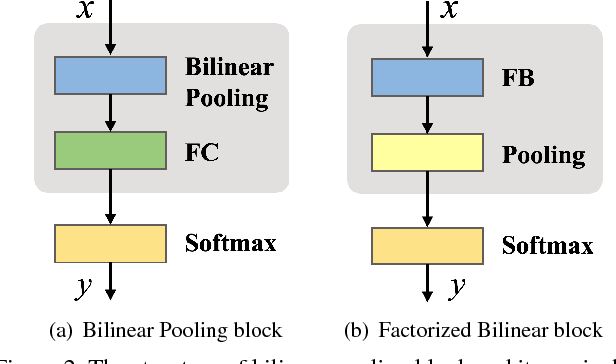 Although Deep Convolutional Neural Networks (CNNs) have liberated their power in various computer vision tasks, the most important components of CNN, convolutional layers and fully connected layers, are still limited to linear transformations. In this paper, we propose a novel Factorized Bilinear (FB) layer to model the pairwise feature interactions by considering the quadratic terms in the transformations. Compared with existing methods that tried to incorporate complex non-linearity structures into CNNs, the factorized parameterization makes our FB layer only require a linear increase of parameters and affordable computational cost. To further reduce the risk of overfitting of the FB layer, a specific remedy called DropFactor is devised during the training process. We also analyze the connection between FB layer and some existing models, and show FB layer is a generalization to them. Finally, we validate the effectiveness of FB layer on several widely adopted datasets including CIFAR-10, CIFAR-100 and ImageNet, and demonstrate superior results compared with various state-of-the-art deep models. 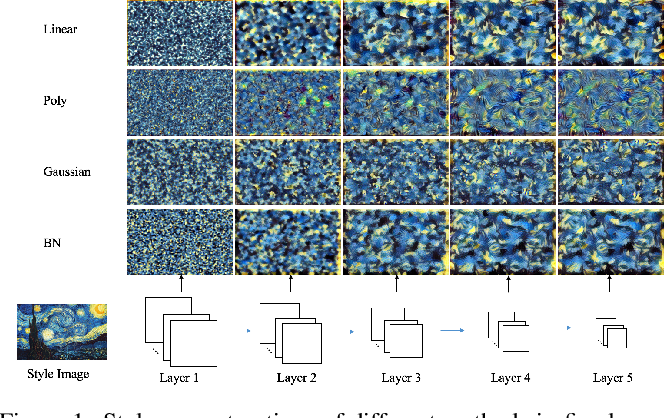 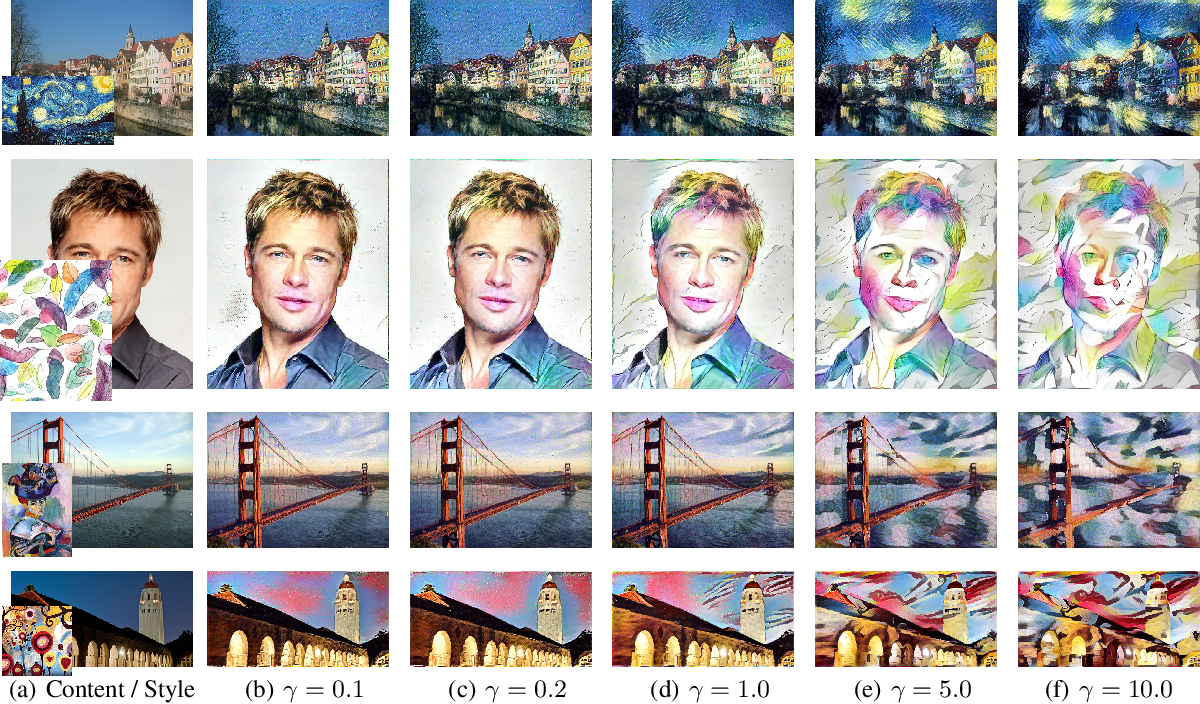 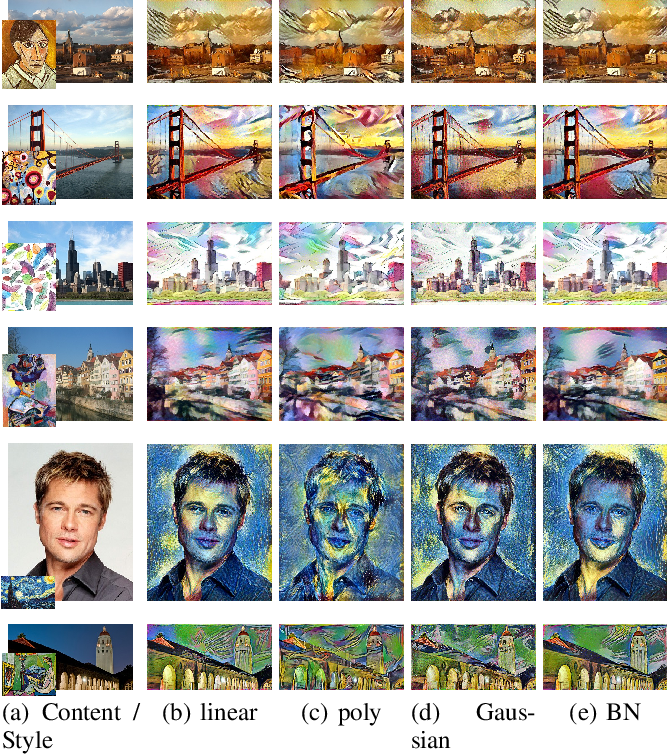 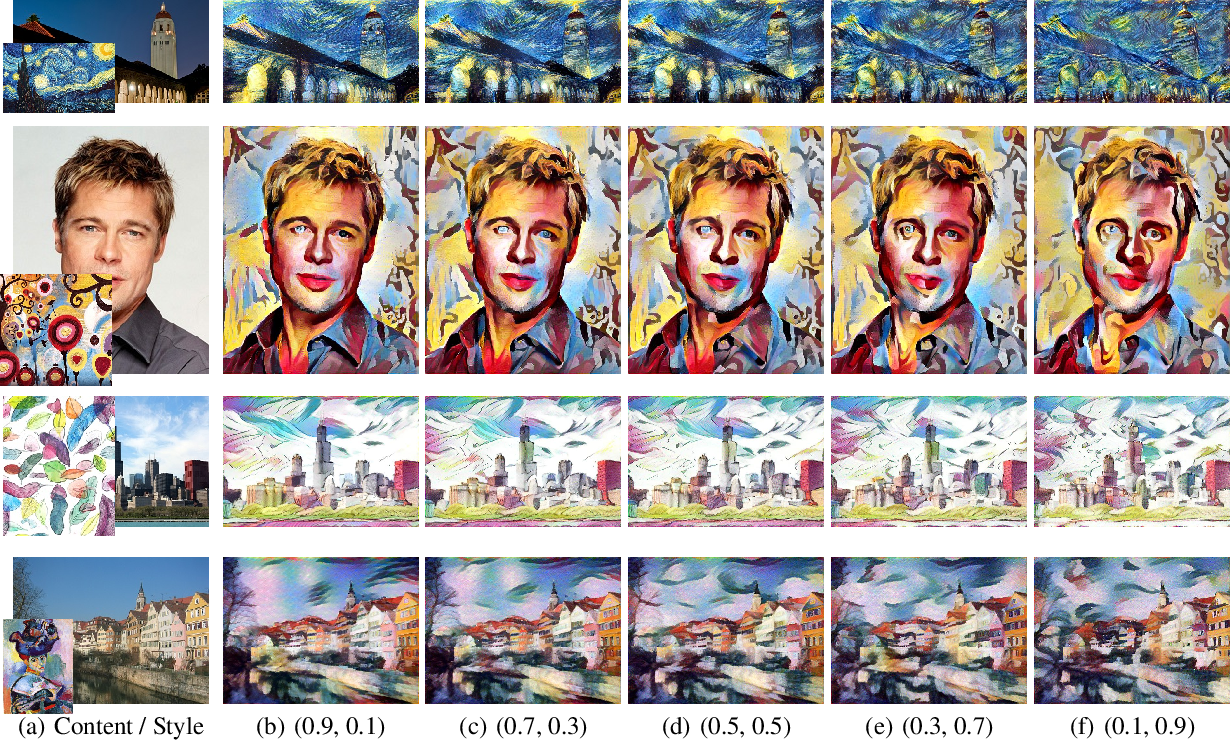 Neural Style Transfer has recently demonstrated very exciting results which catches eyes in both academia and industry. Despite the amazing results, the principle of neural style transfer, especially why the Gram matrices could represent style remains unclear. In this paper, we propose a novel interpretation of neural style transfer by treating it as a domain adaptation problem. Specifically, we theoretically show that matching the Gram matrices of feature maps is equivalent to minimize the Maximum Mean Discrepancy (MMD) with the second order polynomial kernel. Thus, we argue that the essence of neural style transfer is to match the feature distributions between the style images and the generated images. To further support our standpoint, we experiment with several other distribution alignment methods, and achieve appealing results. We believe this novel interpretation connects these two important research fields, and could enlighten future researches. 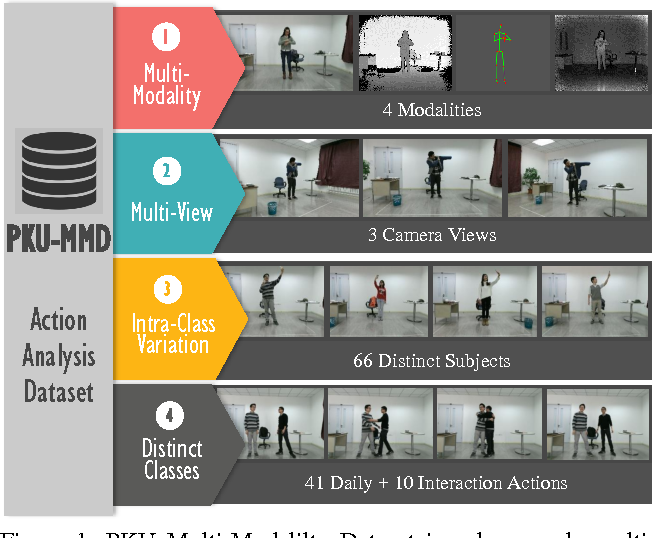 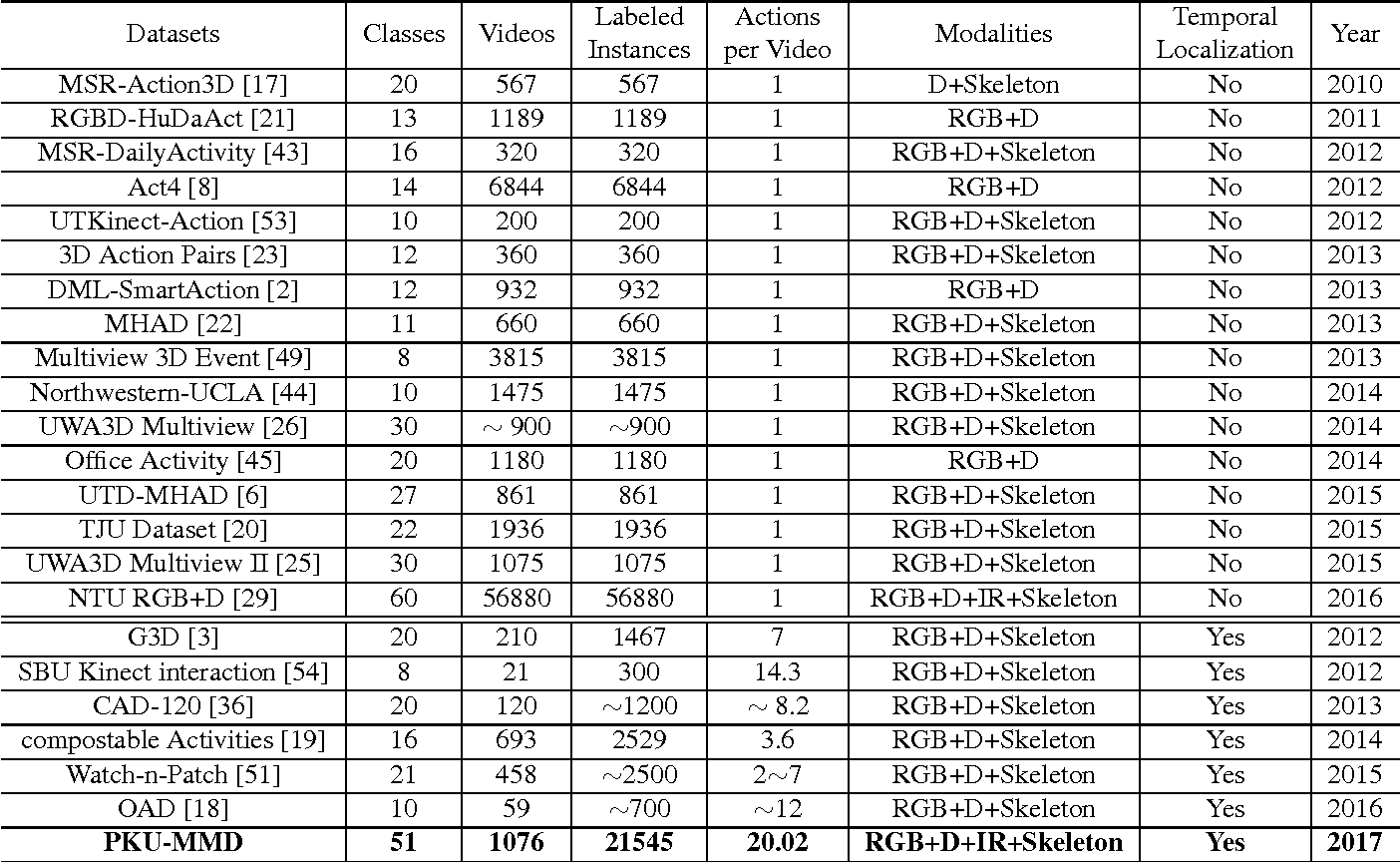 Despite the fact that many 3D human activity benchmarks being proposed, most existing action datasets focus on the action recognition tasks for the segmented videos. There is a lack of standard large-scale benchmarks, especially for current popular data-hungry deep learning based methods. In this paper, we introduce a new large scale benchmark (PKU-MMD) for continuous multi-modality 3D human action understanding and cover a wide range of complex human activities with well annotated information. PKU-MMD contains 1076 long video sequences in 51 action categories, performed by 66 subjects in three camera views. It contains almost 20,000 action instances and 5.4 million frames in total. Our dataset also provides multi-modality data sources, including RGB, depth, Infrared Radiation and Skeleton. With different modalities, we conduct extensive experiments on our dataset in terms of two scenarios and evaluate different methods by various metrics, including a new proposed evaluation protocol 2D-AP. We believe this large-scale dataset will benefit future researches on action detection for the community. 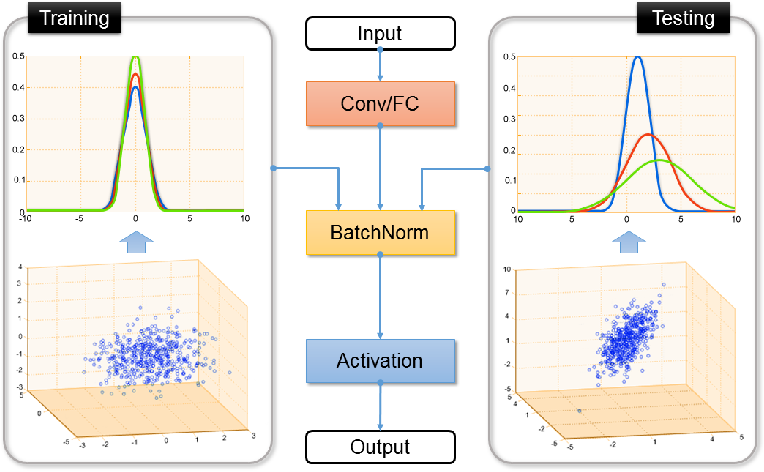 Deep neural networks (DNN) have shown unprecedented success in various computer vision applications such as image classification and object detection. However, it is still a common annoyance during the training phase, that one has to prepare at least thousands of labeled images to fine-tune a network to a specific domain. Recent study (Tommasi et al. 2015) shows that a DNN has strong dependency towards the training dataset, and the learned features cannot be easily transferred to a different but relevant task without fine-tuning. In this paper, we propose a simple yet powerful remedy, called Adaptive Batch Normalization (AdaBN) to increase the generalization ability of a DNN. By modulating the statistics in all Batch Normalization layers across the network, our approach achieves deep adaptation effect for domain adaptation tasks. In contrary to other deep learning domain adaptation methods, our method does not require additional components, and is parameter-free. It archives state-of-the-art performance despite its surprising simplicity. Furthermore, we demonstrate that our method is complementary with other existing methods. Combining AdaBN with existing domain adaptation treatments may further improve model performance. 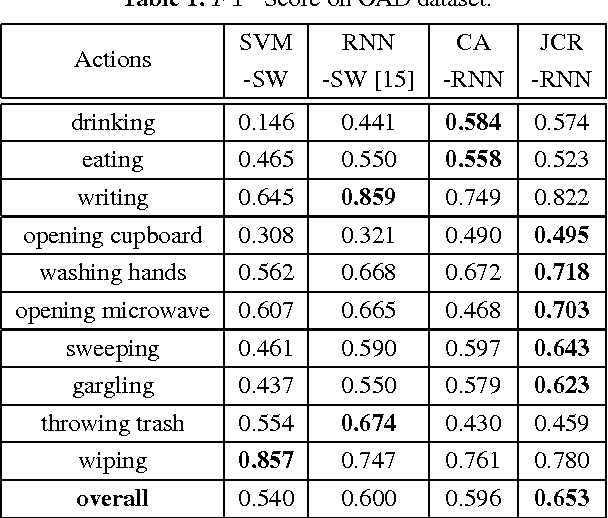 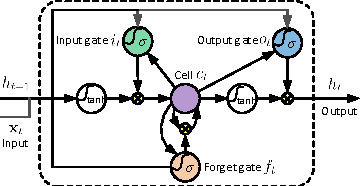 Human action recognition from well-segmented 3D skeleton data has been intensively studied and has been attracting an increasing attention. Online action detection goes one step further and is more challenging, which identifies the action type and localizes the action positions on the fly from the untrimmed stream data. In this paper, we study the problem of online action detection from streaming skeleton data. We propose a multi-task end-to-end Joint Classification-Regression Recurrent Neural Network to better explore the action type and temporal localization information. By employing a joint classification and regression optimization objective, this network is capable of automatically localizing the start and end points of actions more accurately. Specifically, by leveraging the merits of the deep Long Short-Term Memory (LSTM) subnetwork, the proposed model automatically captures the complex long-range temporal dynamics, which naturally avoids the typical sliding window design and thus ensures high computational efficiency. Furthermore, the subtask of regression optimization provides the ability to forecast the action prior to its occurrence. To evaluate our proposed model, we build a large streaming video dataset with annotations. Experimental results on our dataset and the public G3D dataset both demonstrate very promising performance of our scheme. 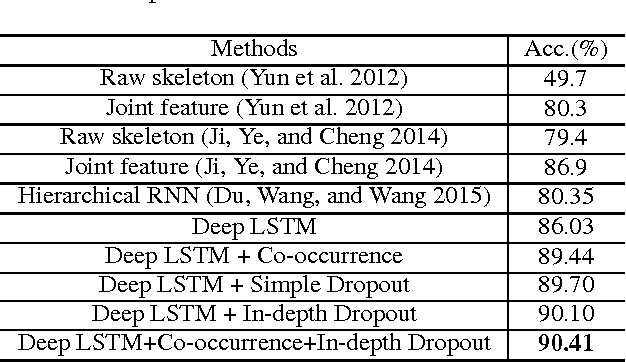 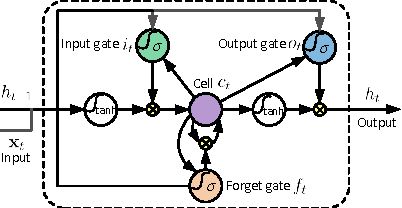 Skeleton based action recognition distinguishes human actions using the trajectories of skeleton joints, which provide a very good representation for describing actions. Considering that recurrent neural networks (RNNs) with Long Short-Term Memory (LSTM) can learn feature representations and model long-term temporal dependencies automatically, we propose an end-to-end fully connected deep LSTM network for skeleton based action recognition. Inspired by the observation that the co-occurrences of the joints intrinsically characterize human actions, we take the skeleton as the input at each time slot and introduce a novel regularization scheme to learn the co-occurrence features of skeleton joints. To train the deep LSTM network effectively, we propose a new dropout algorithm which simultaneously operates on the gates, cells, and output responses of the LSTM neurons. Experimental results on three human action recognition datasets consistently demonstrate the effectiveness of the proposed model.

SimpleDet: A Simple and Versatile Distributed Framework for Object Detection and Instance Recognition 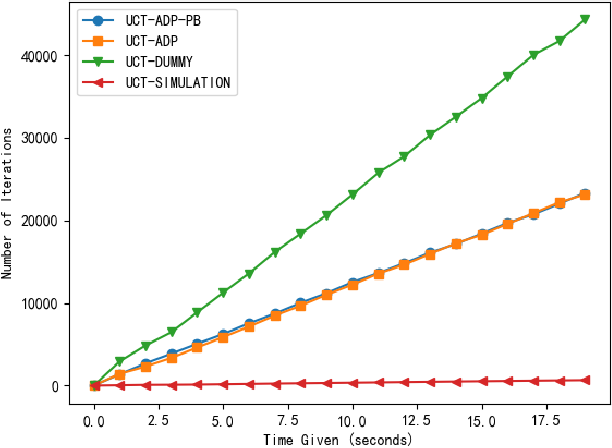 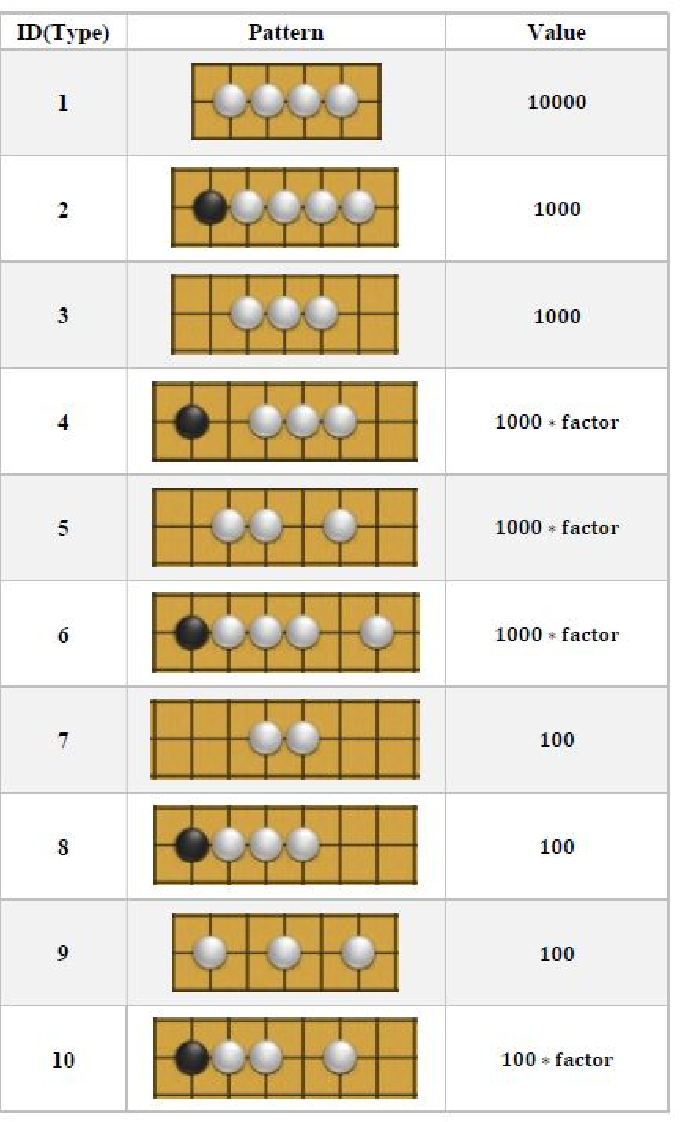 We combine Adaptive Dynamic Programming (ADP), a reinforcement learning method and UCB applied to trees (UCT) algorithm with a more powerful heuristic function based on Progressive Bias method and two pruning strategies for a traditional board game Gomoku. For the Adaptive Dynamic Programming part, we train a shallow forward neural network to give a quick evaluation of Gomoku board situations. UCT is a general approach in MCTS as a tree policy. Our framework use UCT to balance the exploration and exploitation of Gomoku game trees while we also apply powerful pruning strategies and heuristic function to re-select the available 2-adjacent grids of the state and use ADP instead of simulation to give estimated values of expanded nodes. Experiment result shows that this method can eliminate the search depth defect of the simulation process and converge to the correct value faster than single UCT. This approach can be applied to design new Gomoku AI and solve other Gomoku-like board game.