Lossy compression and clustering fundamentally involve a decision about what features are relevant and which are not. The information bottleneck method (IB) by Tishby, Pereira, and Bialek formalized this notion as an information-theoretic optimization problem and proposed an optimal tradeoff between throwing away as many bits as possible, and selectively keeping those that are most important. In the IB, compression is measure my mutual information. Here, we introduce an alternative formulation that replaces mutual information with entropy, which we call the deterministic information bottleneck (DIB), that we argue better captures this notion of compression. As suggested by its name, the solution to the DIB problem turns out to be a deterministic encoder, or hard clustering, as opposed to the stochastic encoder, or soft clustering, that is optimal under the IB. We compare the IB and DIB on synthetic data, showing that the IB and DIB perform similarly in terms of the IB cost function, but that the DIB significantly outperforms the IB in terms of the DIB cost function. We also empirically find that the DIB offers a considerable gain in computational efficiency over the IB, over a range of convergence parameters. Our derivation of the DIB also suggests a method for continuously interpolating between the soft clustering of the IB and the hard clustering of the DIB. 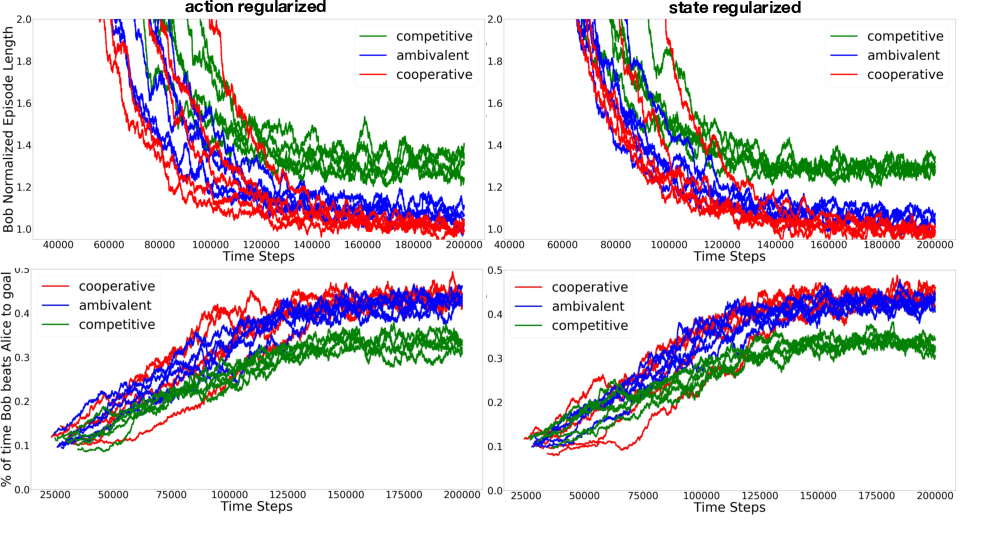 Learning to cooperate with friends and compete with foes is a key component of multi-agent reinforcement learning. Typically to do so, one requires access to either a model of or interaction with the other agent(s). Here we show how to learn effective strategies for cooperation and competition in an asymmetric information game with no such model or interaction. Our approach is to encourage an agent to reveal or hide their intentions using an information-theoretic regularizer. We consider both the mutual information between goal and action given state, as well as the mutual information between goal and state. We show how to stochastically optimize these regularizers in a way that is easy to integrate with policy gradient reinforcement learning. Finally, we demonstrate that cooperative (competitive) policies learned with our approach lead to more (less) reward for a second agent in two simple asymmetric information games.

We derive a new intrinsic social motivation for multi-agent reinforcement learning (MARL), in which agents are rewarded for having causal influence over another agent's actions. Causal influence is assessed using counterfactual reasoning. The reward does not depend on observing another agent's reward function, and is thus a more realistic approach to MARL than taken in previous work. We show that the causal influence reward is related to maximizing the mutual information between agents' actions. We test the approach in challenging social dilemma environments, where it consistently leads to enhanced cooperation between agents and higher collective reward. Moreover, we find that rewarding influence can lead agents to develop emergent communication protocols. We therefore employ influence to train agents to use an explicit communication channel, and find that it leads to more effective communication and higher collective reward. Finally, we show that influence can be computed by equipping each agent with an internal model that predicts the actions of other agents. This allows the social influence reward to be computed without the use of a centralised controller, and as such represents a significantly more general and scalable inductive bias for MARL with independent agents.