Nonconvex optimization problems such as the ones in training deep neural networks suffer from a phenomenon called saddle point proliferation. This means that there are a vast number of high error saddle points present in the loss function. Second order methods have been tremendously successful and widely adopted in the convex optimization community, while their usefulness in deep learning remains limited. This is due to two problems: computational complexity and the methods being driven towards the high error saddle points. We introduce a novel algorithm specially designed to solve these two issues, providing a crucial first step to take the widely known advantages of Newton's method to the nonconvex optimization community, especially in high dimensional settings. 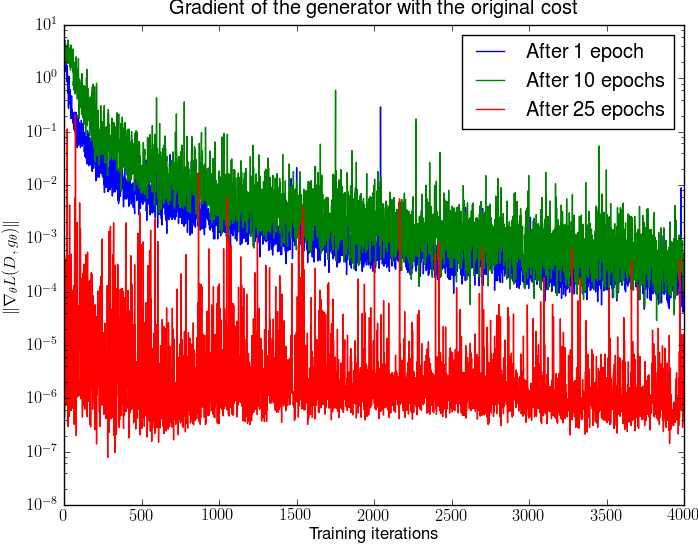 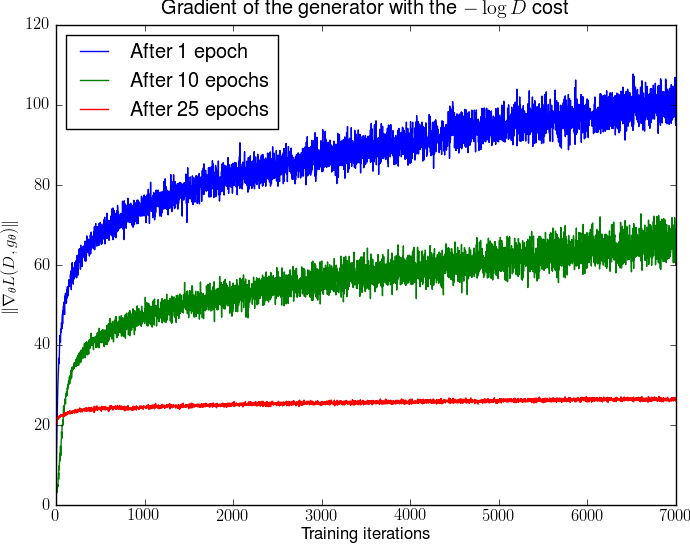 The goal of this paper is not to introduce a single algorithm or method, but to make theoretical steps towards fully understanding the training dynamics of generative adversarial networks. In order to substantiate our theoretical analysis, we perform targeted experiments to verify our assumptions, illustrate our claims, and quantify the phenomena. This paper is divided into three sections. The first section introduces the problem at hand. The second section is dedicated to studying and proving rigorously the problems including instability and saturation that arize when training generative adversarial networks. The third section examines a practical and theoretically grounded direction towards solving these problems, while introducing new tools to study them. 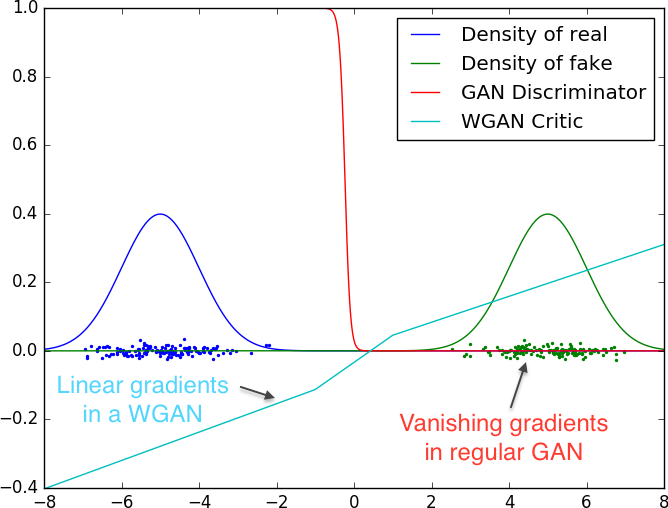 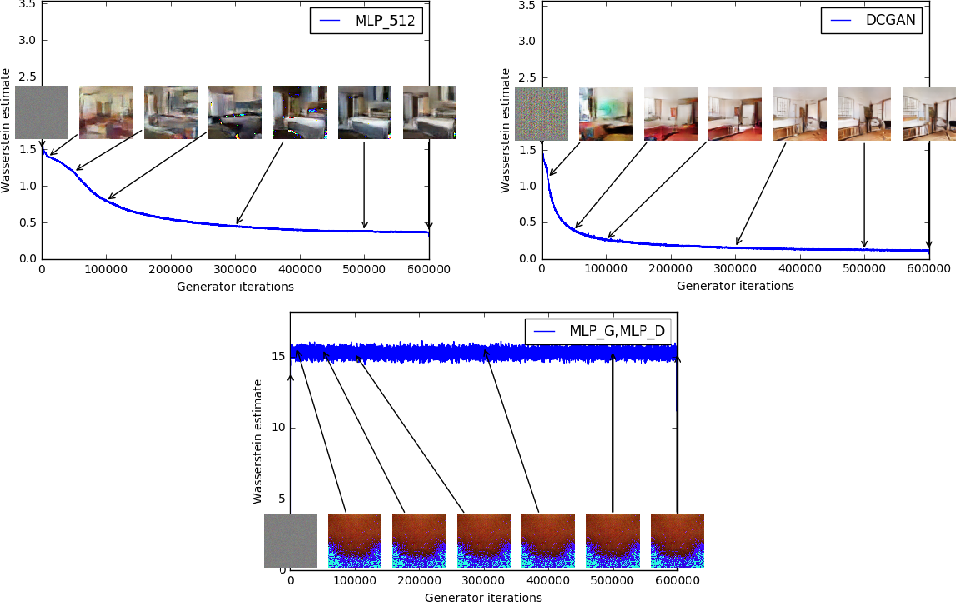 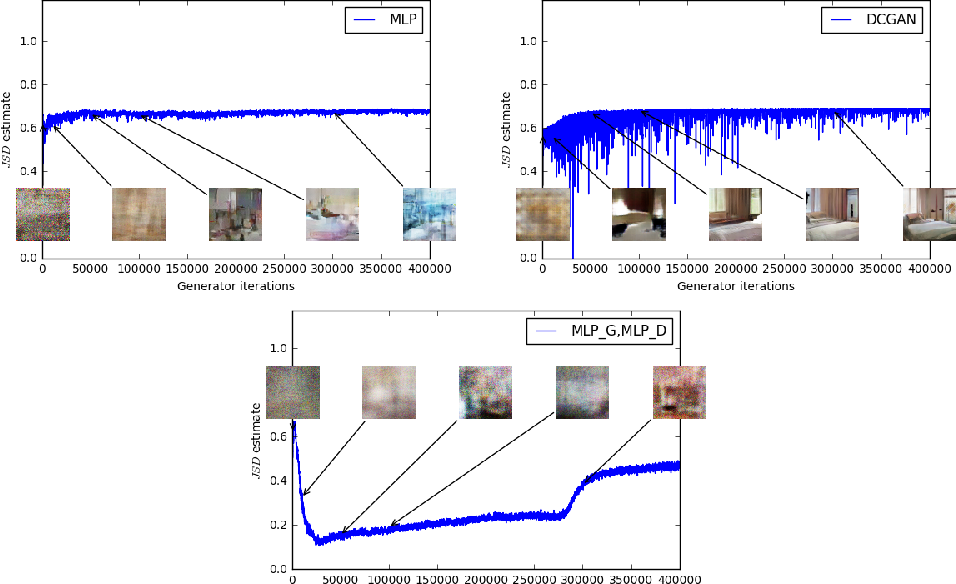 We introduce a new algorithm named WGAN, an alternative to traditional GAN training. In this new model, we show that we can improve the stability of learning, get rid of problems like mode collapse, and provide meaningful learning curves useful for debugging and hyperparameter searches. Furthermore, we show that the corresponding optimization problem is sound, and provide extensive theoretical work highlighting the deep connections to other distances between distributions. 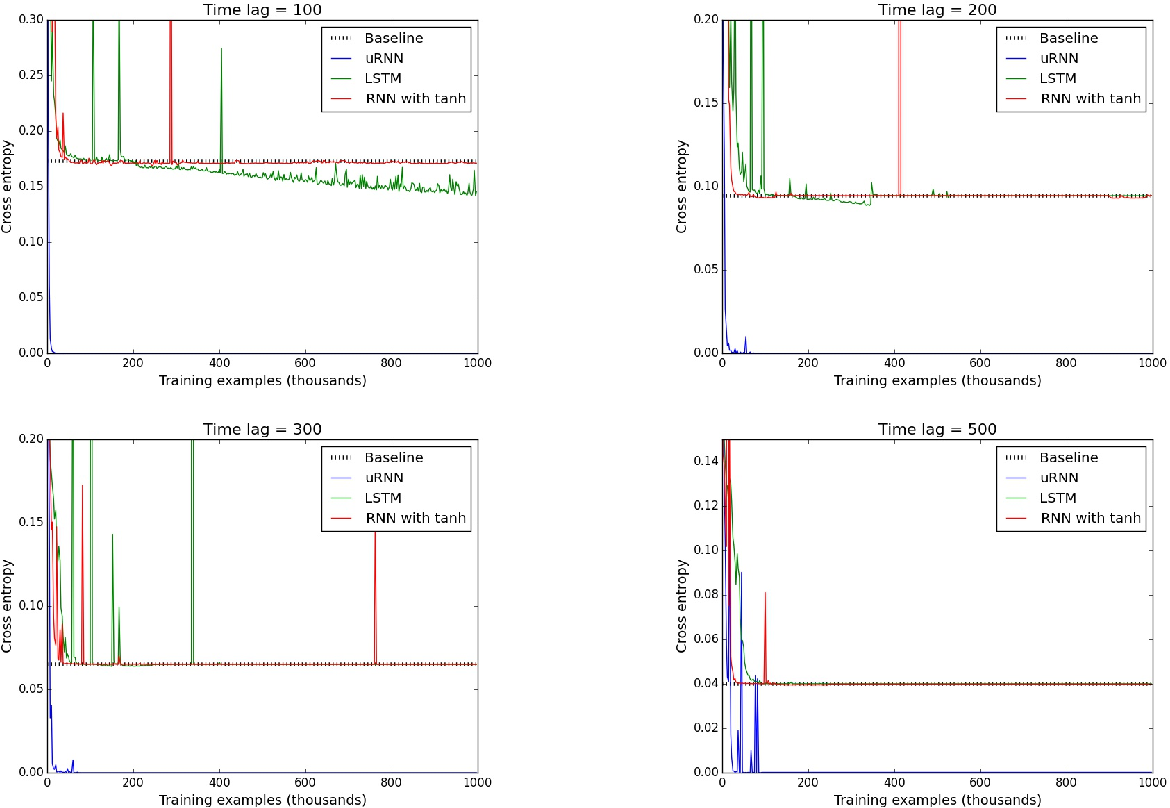 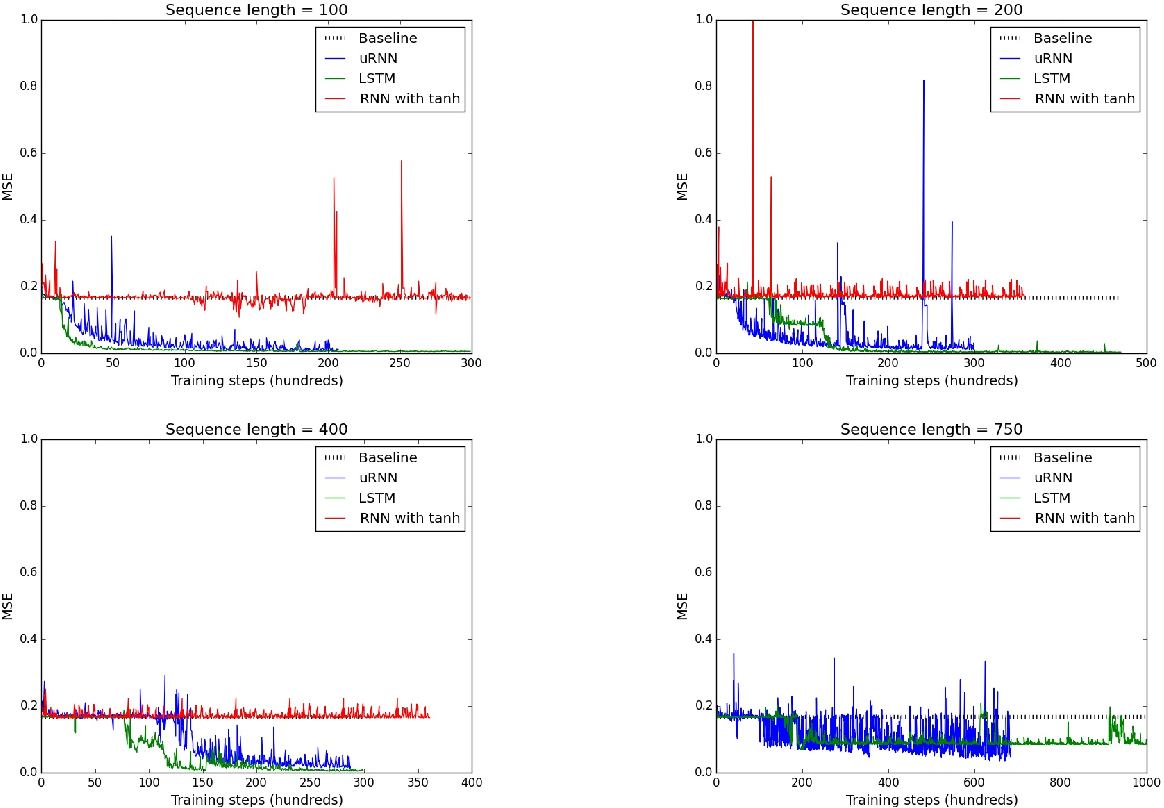 Recurrent neural networks (RNNs) are notoriously difficult to train. When the eigenvalues of the hidden to hidden weight matrix deviate from absolute value 1, optimization becomes difficult due to the well studied issue of vanishing and exploding gradients, especially when trying to learn long-term dependencies. To circumvent this problem, we propose a new architecture that learns a unitary weight matrix, with eigenvalues of absolute value exactly 1. The challenge we address is that of parametrizing unitary matrices in a way that does not require expensive computations (such as eigendecomposition) after each weight update. We construct an expressive unitary weight matrix by composing several structured matrices that act as building blocks with parameters to be learned. Optimization with this parameterization becomes feasible only when considering hidden states in the complex domain. We demonstrate the potential of this architecture by achieving state of the art results in several hard tasks involving very long-term dependencies.

We propose Symplectic Recurrent Neural Networks (SRNNs) as learning algorithms that capture the dynamics of physical systems from observed trajectories. An SRNN models the Hamiltonian function of the system by a neural network and furthermore leverages symplectic integration, multiple-step training and initial state optimization to address the challenging numerical issues associated with Hamiltonian systems. We show SRNNs succeed reliably on complex and noisy Hamiltonian systems. We also show how to augment the SRNN integration scheme in order to handle stiff dynamical systems such as bouncing billiards.

We introduce Invariant Risk Minimization (IRM), a learning paradigm to estimate invariant correlations across multiple training distributions. To achieve this goal, IRM learns a data representation such that the optimal classifier, on top of that data representation, matches for all training distributions. Through theory and experiments, we show how the invariances learned by IRM relate to the causal structures governing the data and enable out-of-distribution generalization. 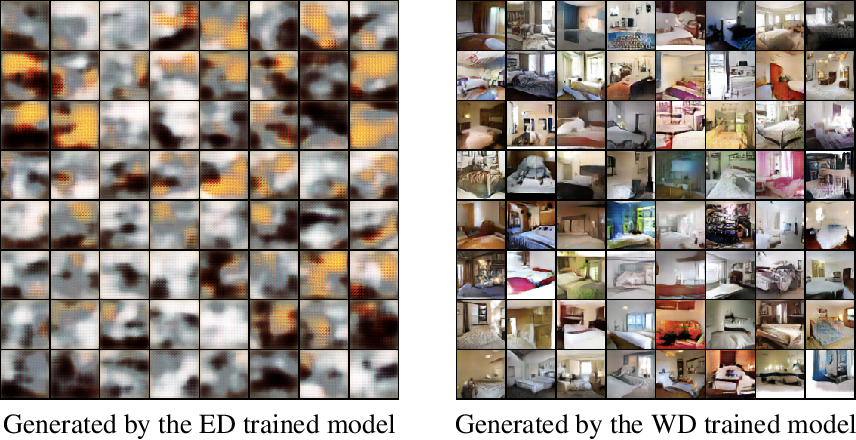 Learning algorithms for implicit generative models can optimize a variety of criteria that measure how the data distribution differs from the implicit model distribution, including the Wasserstein distance, the Energy distance, and the Maximum Mean Discrepancy criterion. A careful look at the geometries induced by these distances on the space of probability measures reveals interesting differences. In particular, we can establish surprising approximate global convergence guarantees for the $1$-Wasserstein distance,even when the parametric generator has a nonconvex parametrization. 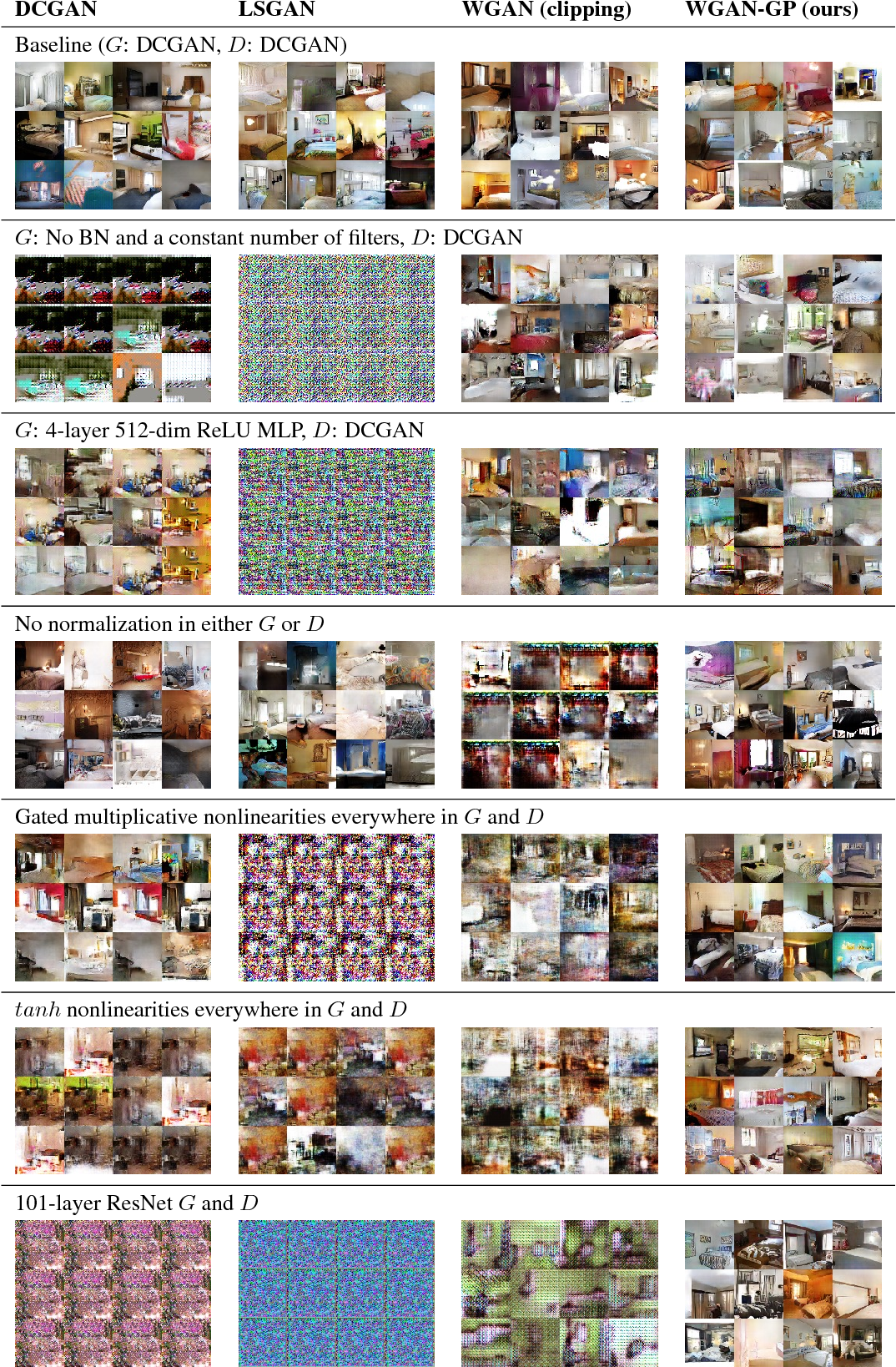 Generative Adversarial Networks (GANs) are powerful generative models, but suffer from training instability. The recently proposed Wasserstein GAN (WGAN) makes progress toward stable training of GANs, but sometimes can still generate only low-quality samples or fail to converge. We find that these problems are often due to the use of weight clipping in WGAN to enforce a Lipschitz constraint on the critic, which can lead to undesired behavior. We propose an alternative to clipping weights: penalize the norm of gradient of the critic with respect to its input. Our proposed method performs better than standard WGAN and enables stable training of a wide variety of GAN architectures with almost no hyperparameter tuning, including 101-layer ResNets and language models over discrete data. We also achieve high quality generations on CIFAR-10 and LSUN bedrooms. 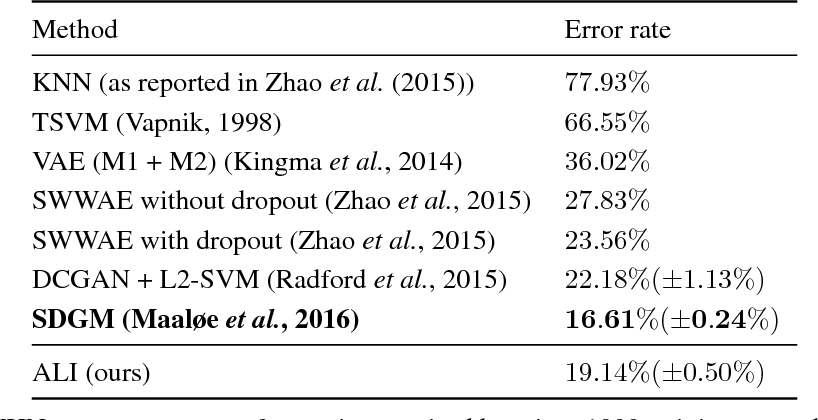 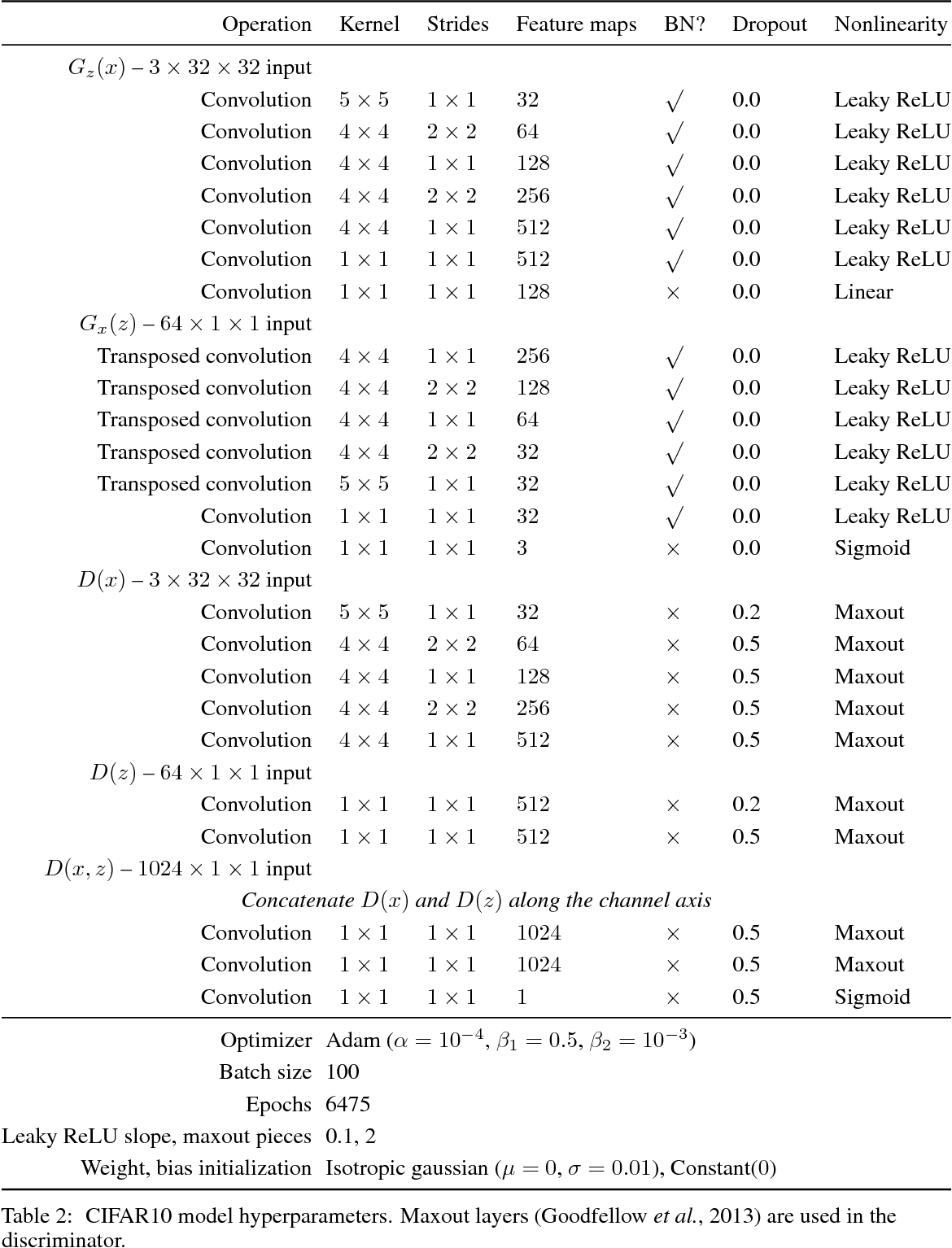 We propose a reinforcement learning agent to solve hard exploration games by learning a range of directed exploratory policies. We construct an episodic memory-based intrinsic reward using k-nearest neighbors over the agent's recent experience to train the directed exploratory policies, thereby encouraging the agent to repeatedly revisit all states in its environment. A self-supervised inverse dynamics model is used to train the embeddings of the nearest neighbour lookup, biasing the novelty signal towards what the agent can control. We employ the framework of Universal Value Function Approximators (UVFA) to simultaneously learn many directed exploration policies with the same neural network, with different trade-offs between exploration and exploitation. By using the same neural network for different degrees of exploration/exploitation, transfer is demonstrated from predominantly exploratory policies yielding effective exploitative policies. The proposed method can be incorporated to run with modern distributed RL agents that collect large amounts of experience from many actors running in parallel on separate environment instances. Our method doubles the performance of the base agent in all hard exploration in the Atari-57 suite while maintaining a very high score across the remaining games, obtaining a median human normalised score of 1344.0%. Notably, the proposed method is the first algorithm to achieve non-zero rewards (with a mean score of 8,400) in the game of Pitfall! without using demonstrations or hand-crafted features.


* Published as a conference paper in ICLR 2020