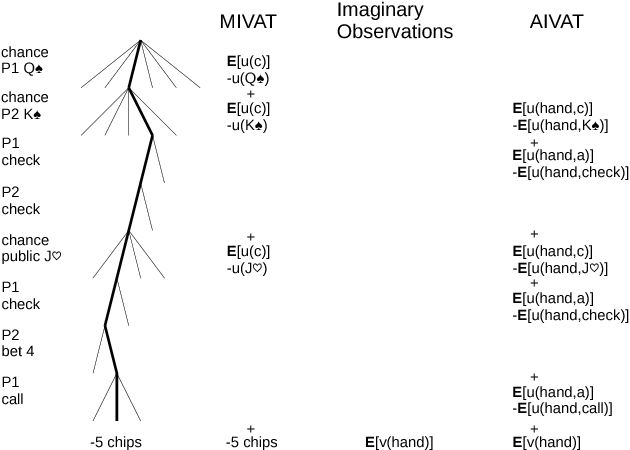 Evaluating agent performance when outcomes are stochastic and agents use randomized strategies can be challenging when there is limited data available. The variance of sampled outcomes may make the simple approach of Monte Carlo sampling inadequate. This is the case for agents playing heads-up no-limit Texas hold'em poker, where man-machine competitions have involved multiple days of consistent play and still not resulted in statistically significant conclusions even when the winner's margin is substantial. In this paper, we introduce AIVAT, a low variance, provably unbiased value assessment tool that uses an arbitrary heuristic estimate of state value, as well as the explicit strategy of a subset of the agents. Unlike existing techniques which reduce the variance from chance events, or only consider game ending actions, AIVAT reduces the variance both from choices by nature and by players with a known strategy. The resulting estimator in no-limit poker can reduce the number of hands needed to draw statistical conclusions by more than a factor of 10. 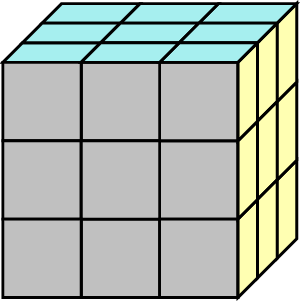 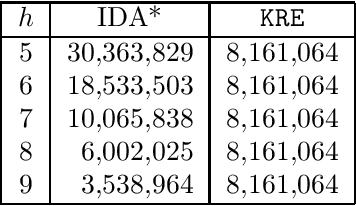 Korf, Reid, and Edelkamp introduced a formula to predict the number of nodes IDA* will expand on a single iteration for a given consistent heuristic, and experimentally demonstrated that it could make very accurate predictions. In this paper we show that, in addition to requiring the heuristic to be consistent, their formulas predictions are accurate only at levels of the brute-force search tree where the heuristic values obey the unconditional distribution that they defined and then used in their formula. We then propose a new formula that works well without these requirements, i.e., it can make accurate predictions of IDA*s performance for inconsistent heuristics and if the heuristic values in any level do not obey the unconditional distribution. In order to achieve this we introduce the conditional distribution of heuristic values which is a generalization of their unconditional heuristic distribution. We also provide extensions of our formula that handle individual start states and the augmentation of IDA* with bidirectional pathmax (BPMX), a technique for propagating heuristic values when inconsistent heuristics are used. Experimental results demonstrate the accuracy of our new method and all its variations. 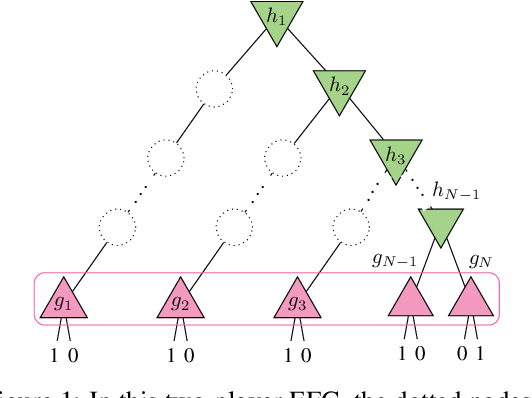 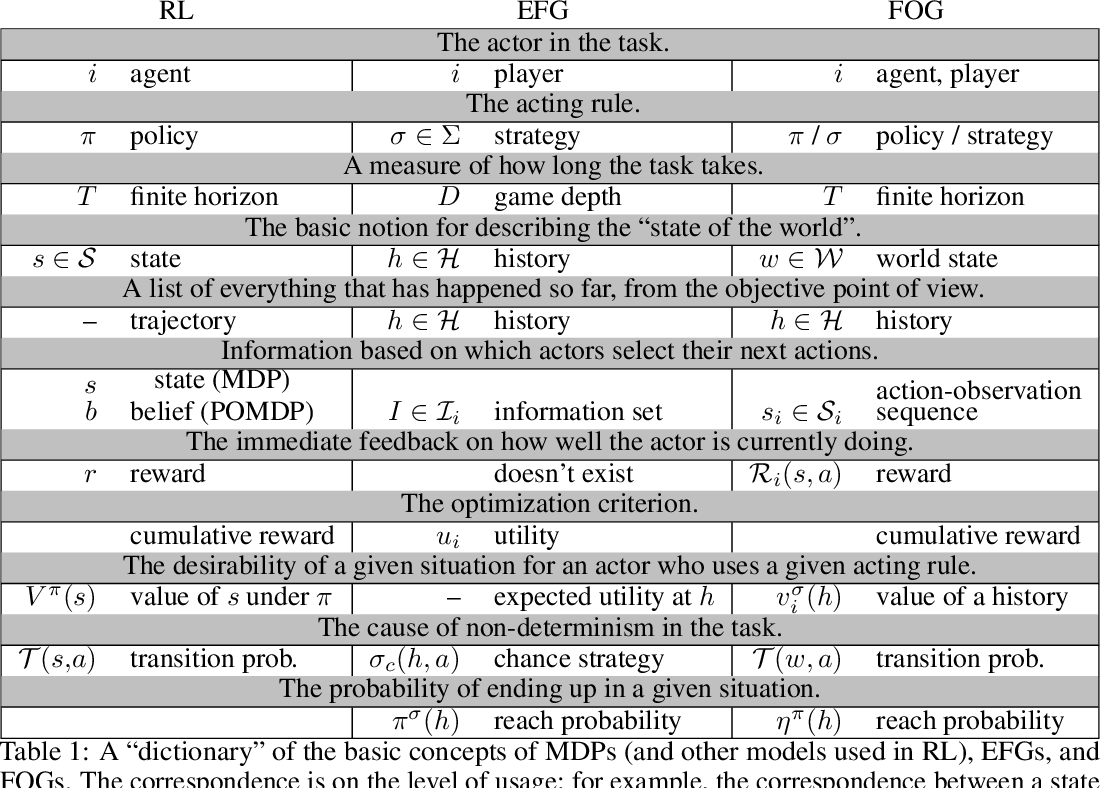 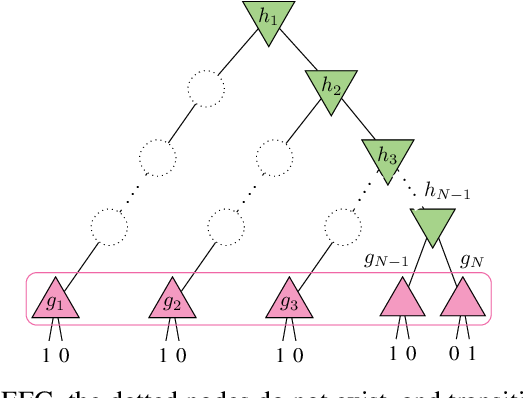 Multiagent decision-making problems in partially observable environments are usually modeled as either extensive-form games (EFGs) within the game theory community or partially observable stochastic games (POSGs) within the reinforcement learning community. While most practical problems can be modeled in both formalisms, the communities using these models are mostly distinct with little sharing of ideas or advances. The last decade has seen dramatic progress in algorithms for EFGs, mainly driven by the challenge problem of poker. We have seen computational techniques achieving super-human performance, some variants of poker are essentially solved, and there are now sound local search algorithms which were previously thought impossible. While the advances have garnered attention, the fundamental advances are not yet understood outside the EFG community. This can be largely explained by the starkly different formalisms between the game theory and reinforcement learning communities and, further, by the unsuitability of the original EFG formalism to make the ideas simple and clear. This paper aims to address these hindrances, by advocating a new unifying formalism, a variant of POSGs, which we call Factored-Observation Games (FOGs). We prove that any timeable perfect-recall EFG can be efficiently modeled as a FOG as well as relating FOGs to other existing formalisms. Additionally, a FOG explicitly identifies the public and private components of observations, which is fundamental to the recent EFG breakthroughs. We conclude by presenting the two building-blocks of these breakthroughs --- counterfactual regret minimization and public state decomposition --- in the new formalism, illustrating our goal of a simpler path for sharing recent advances between game theory and reinforcement learning community. 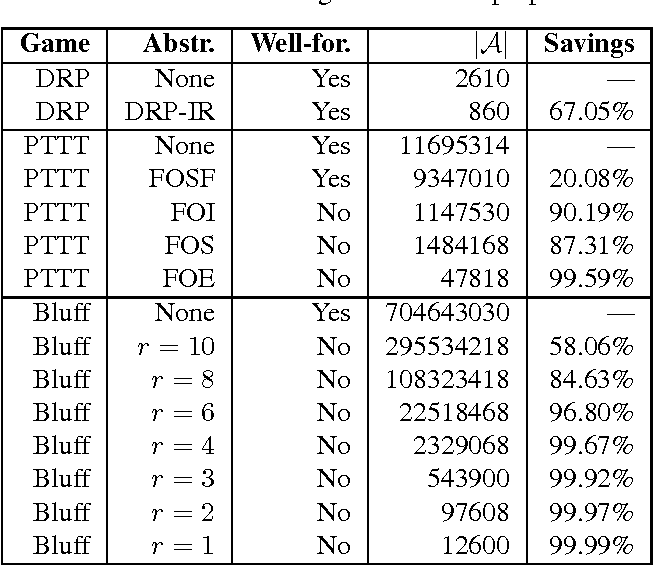 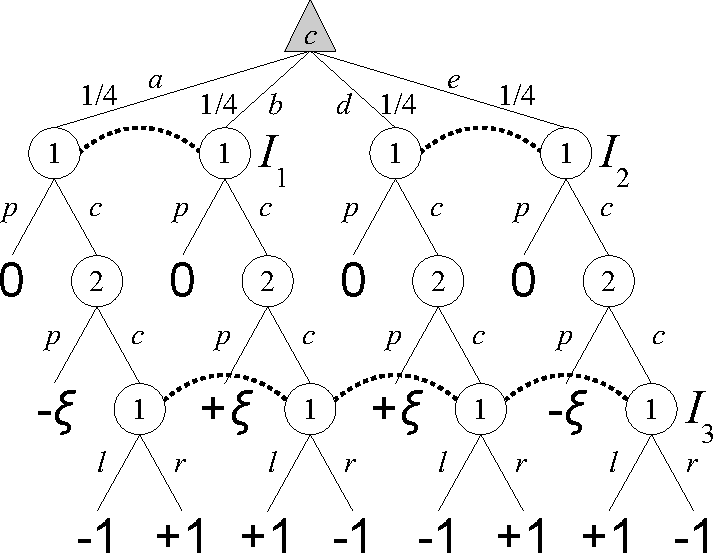 Counterfactual Regret Minimization (CFR) is an efficient no-regret learning algorithm for decision problems modeled as extensive games. CFR's regret bounds depend on the requirement of perfect recall: players always remember information that was revealed to them and the order in which it was revealed. In games without perfect recall, however, CFR's guarantees do not apply. In this paper, we present the first regret bound for CFR when applied to a general class of games with imperfect recall. In addition, we show that CFR applied to any abstraction belonging to our general class results in a regret bound not just for the abstract game, but for the full game as well. We verify our theory and show how imperfect recall can be used to trade a small increase in regret for a significant reduction in memory in three domains: die-roll poker, phantom tic-tac-toe, and Bluff.


* 21 pages, 4 figures, expanded version of article to appear in Proceedings of the Twenty-Ninth International Conference on Machine Learning 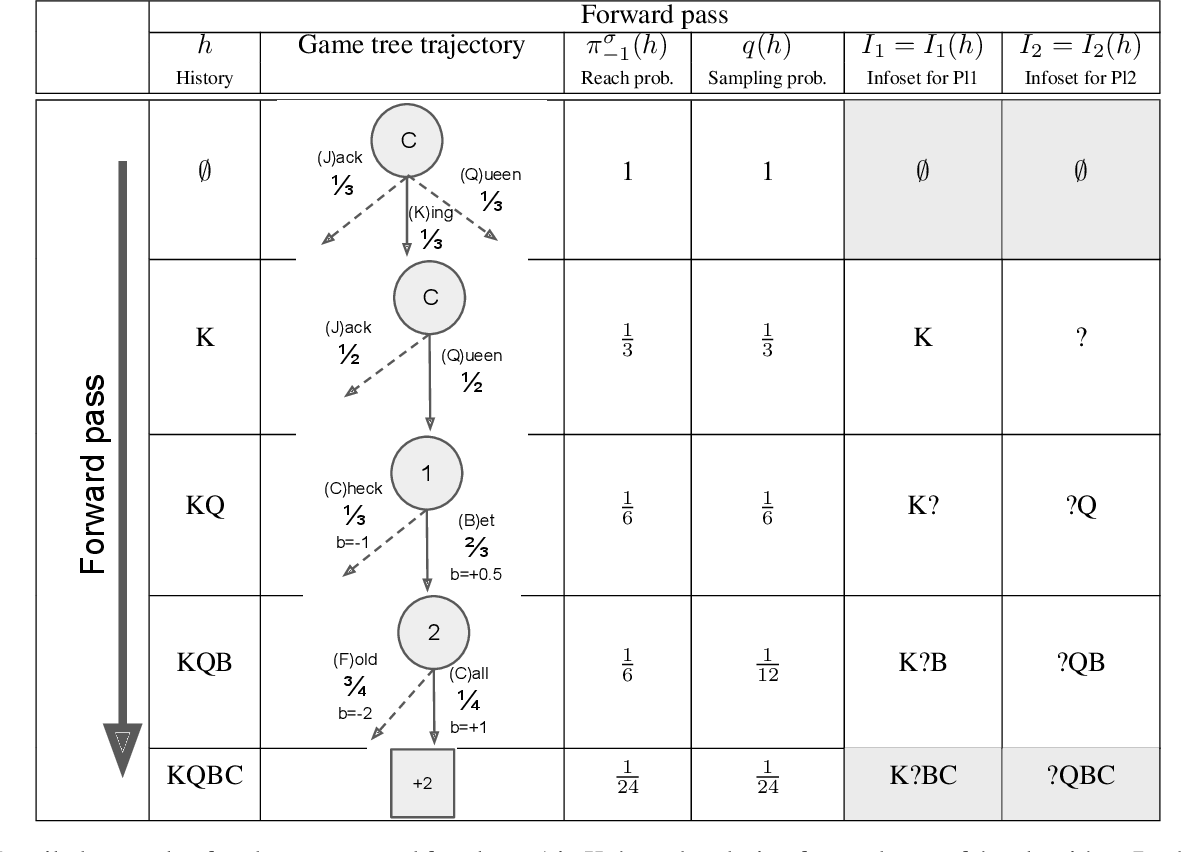 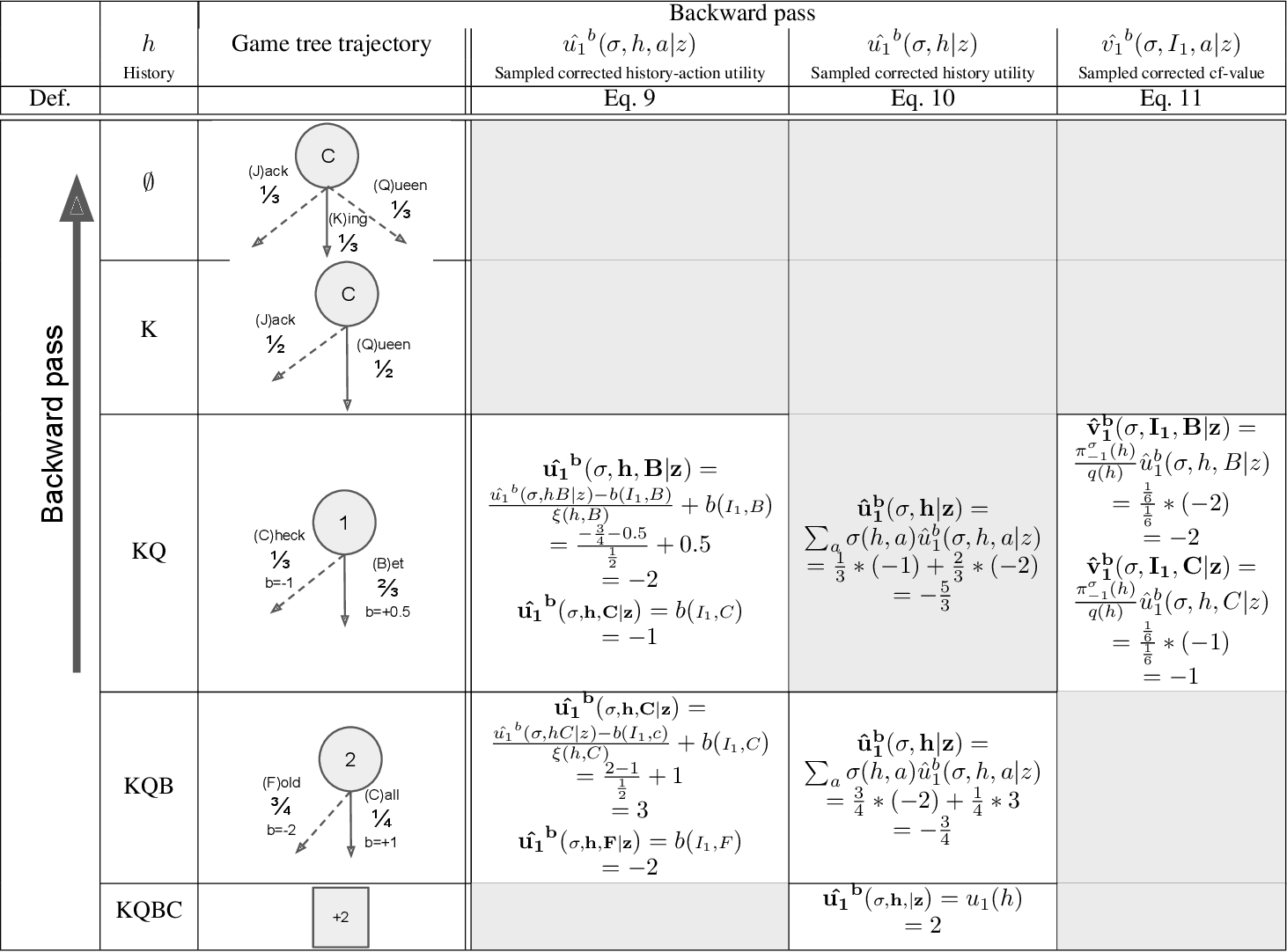 Learning strategies for imperfect information games from samples of interaction is a challenging problem. A common method for this setting, Monte Carlo Counterfactual Regret Minimization (MCCFR), can have slow long-term convergence rates due to high variance. In this paper, we introduce a variance reduction technique (VR-MCCFR) that applies to any sampling variant of MCCFR. Using this technique, per-iteration estimated values and updates are reformulated as a function of sampled values and state-action baselines, similar to their use in policy gradient reinforcement learning. The new formulation allows estimates to be bootstrapped from other estimates within the same episode, propagating the benefits of baselines along the sampled trajectory; the estimates remain unbiased even when bootstrapping from other estimates. Finally, we show that given a perfect baseline, the variance of the value estimates can be reduced to zero. Experimental evaluation shows that VR-MCCFR brings an order of magnitude speedup, while the empirical variance decreases by three orders of magnitude. The decreased variance allows for the first time CFR+ to be used with sampling, increasing the speedup to two orders of magnitude. 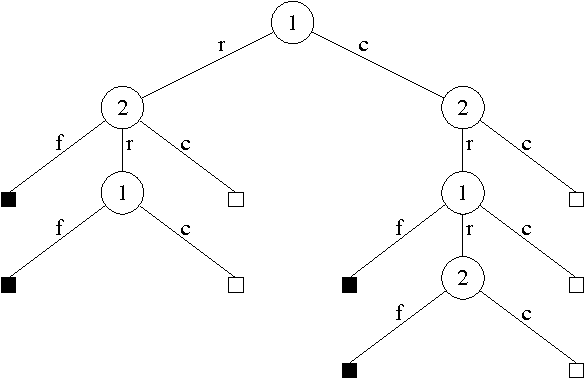 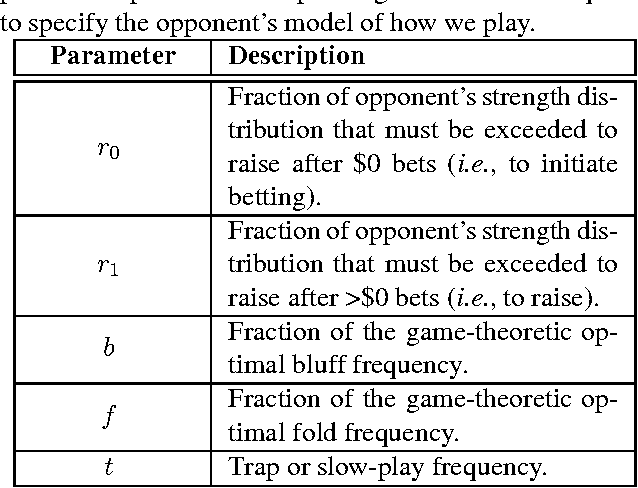 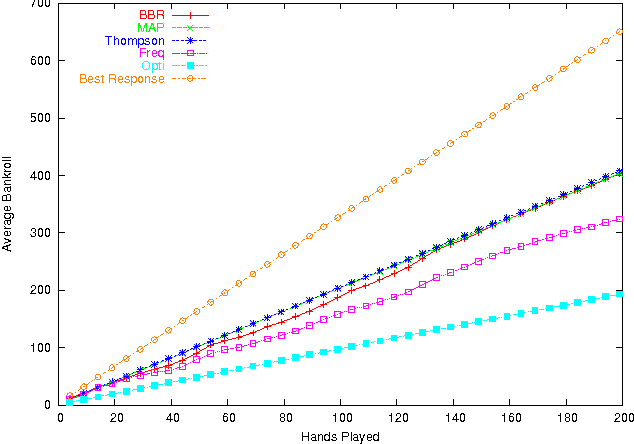 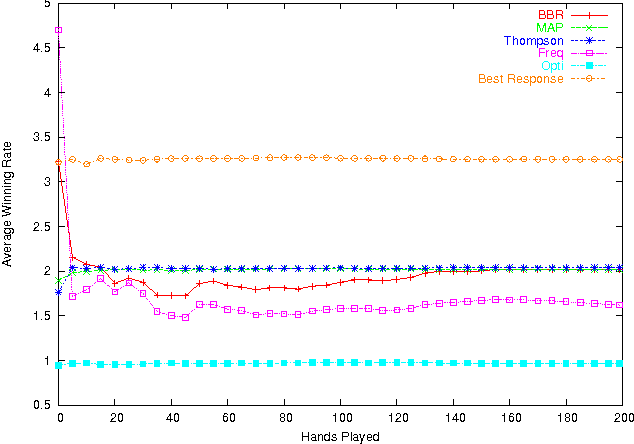 Poker is a challenging problem for artificial intelligence, with non-deterministic dynamics, partial observability, and the added difficulty of unknown adversaries. Modelling all of the uncertainties in this domain is not an easy task. In this paper we present a Bayesian probabilistic model for a broad class of poker games, separating the uncertainty in the game dynamics from the uncertainty of the opponent's strategy. We then describe approaches to two key subproblems: (i) inferring a posterior over opponent strategies given a prior distribution and observations of their play, and (ii) playing an appropriate response to that distribution. We demonstrate the overall approach on a reduced version of poker using Dirichlet priors and then on the full game of Texas hold'em using a more informed prior. We demonstrate methods for playing effective responses to the opponent, based on the posterior. 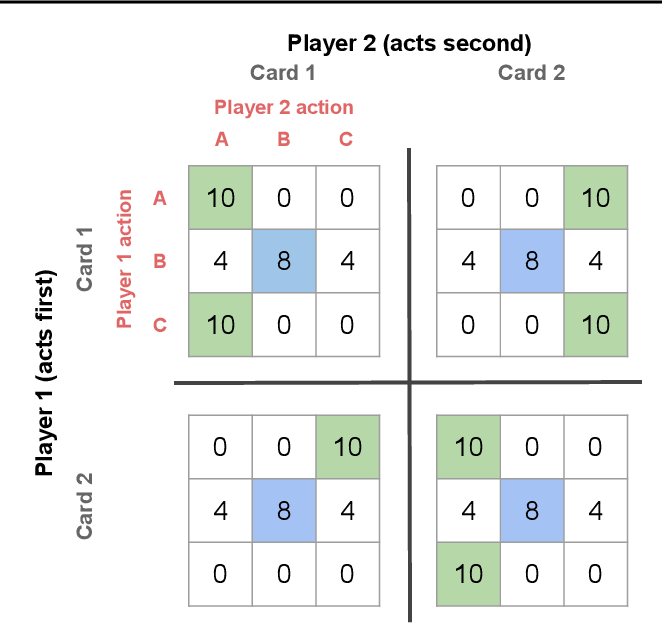 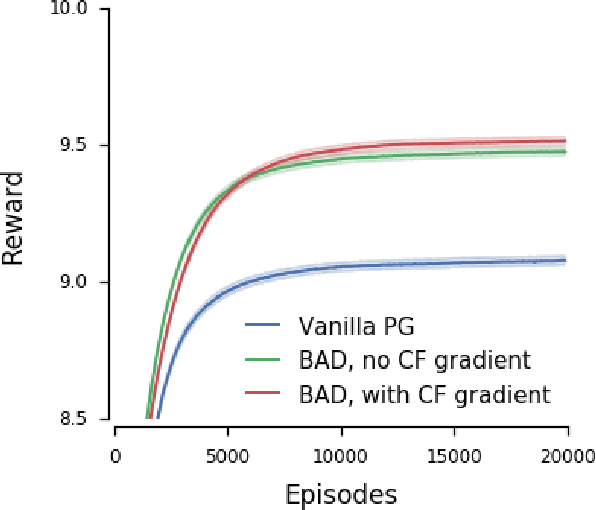 When observing the actions of others, humans carry out inferences about why the others acted as they did, and what this implies about their view of the world. Humans also use the fact that their actions will be interpreted in this manner when observed by others, allowing them to act informatively and thereby communicate efficiently with others. Although learning algorithms have recently achieved superhuman performance in a number of two-player, zero-sum games, scalable multi-agent reinforcement learning algorithms that can discover effective strategies and conventions in complex, partially observable settings have proven elusive. We present the Bayesian action decoder (BAD), a new multi-agent learning method that uses an approximate Bayesian update to obtain a public belief that conditions on the actions taken by all agents in the environment. Together with the public belief, this Bayesian update effectively defines a new Markov decision process, the public belief MDP, in which the action space consists of deterministic partial policies, parameterised by deep neural networks, that can be sampled for a given public state. It exploits the fact that an agent acting only on this public belief state can still learn to use its private information if the action space is augmented to be over partial policies mapping private information into environment actions. The Bayesian update is also closely related to the theory of mind reasoning that humans carry out when observing others' actions. We first validate BAD on a proof-of-principle two-step matrix game, where it outperforms traditional policy gradient methods. We then evaluate BAD on the challenging, cooperative partial-information card game Hanabi, where in the two-player setting the method surpasses all previously published learning and hand-coded approaches.

Artificial intelligence has seen several breakthroughs in recent years, with games often serving as milestones. A common feature of these games is that players have perfect information. Poker is the quintessential game of imperfect information, and a longstanding challenge problem in artificial intelligence. We introduce DeepStack, an algorithm for imperfect information settings. It combines recursive reasoning to handle information asymmetry, decomposition to focus computation on the relevant decision, and a form of intuition that is automatically learned from self-play using deep learning. In a study involving 44,000 hands of poker, DeepStack defeated with statistical significance professional poker players in heads-up no-limit Texas hold'em. The approach is theoretically sound and is shown to produce more difficult to exploit strategies than prior approaches.

The Hanabi Challenge: A New Frontier for AI Research 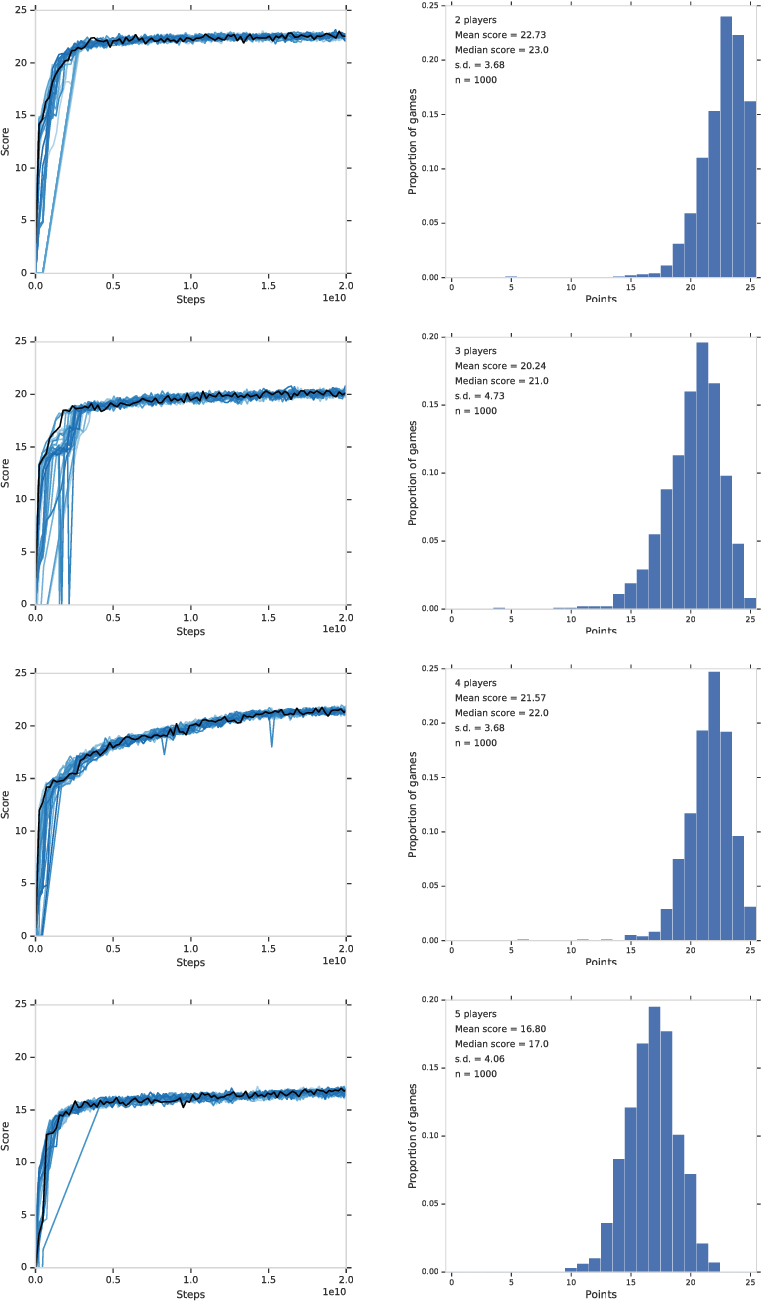 From the early days of computing, games have been important testbeds for studying how well machines can do sophisticated decision making. In recent years, machine learning has made dramatic advances with artificial agents reaching superhuman performance in challenge domains like Go, Atari, and some variants of poker. As with their predecessors of chess, checkers, and backgammon, these game domains have driven research by providing sophisticated yet well-defined challenges for artificial intelligence practitioners. We continue this tradition by proposing the game of Hanabi as a new challenge domain with novel problems that arise from its combination of purely cooperative gameplay and imperfect information in a two to five player setting. In particular, we argue that Hanabi elevates reasoning about the beliefs and intentions of other agents to the foreground. We believe developing novel techniques capable of imbuing artificial agents with such theory of mind will not only be crucial for their success in Hanabi, but also in broader collaborative efforts, and especially those with human partners. To facilitate future research, we introduce the open-source Hanabi Learning Environment, propose an experimental framework for the research community to evaluate algorithmic advances, and assess the performance of current state-of-the-art techniques.