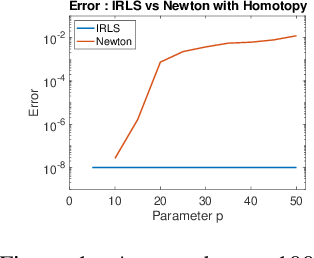 Linear regression in $\ell_p$-norm is a canonical optimization problem that arises in several applications, including sparse recovery, semi-supervised learning, and signal processing. Generic convex optimization algorithms for solving $\ell_p$-regression are slow in practice. Iteratively Reweighted Least Squares (IRLS) is an easy to implement family of algorithms for solving these problems that has been studied for over 50 years. However, these algorithms often diverge for p > 3, and since the work of Osborne (1985), it has been an open problem whether there is an IRLS algorithm that is guaranteed to converge rapidly for p > 3. We propose p-IRLS, the first IRLS algorithm that provably converges geometrically for any $p \in [2,\infty).$ Our algorithm is simple to implement and is guaranteed to find a $(1+\varepsilon)$-approximate solution in $O(p^{3.5} m^{\frac{p-2}{2(p-1)}} \log \frac{m}{\varepsilon}) \le O_p(\sqrt{m} \log \frac{m}{\varepsilon} )$ iterations. Our experiments demonstrate that it performs even better than our theoretical bounds, beats the standard Matlab/CVX implementation for solving these problems by 10--50x, and is the fastest among available implementations in the high-accuracy regime.


* Code for this work is available at https://github.com/utoronto-theory/pIRLS

Fast, Provable Algorithms for Isotonic Regression in all $\ell_{p}$-norms

Given a directed acyclic graph $G,$ and a set of values $y$ on the vertices, the Isotonic Regression of $y$ is a vector $x$ that respects the partial order described by $G,$ and minimizes $||x-y||,$ for a specified norm. This paper gives improved algorithms for computing the Isotonic Regression for all weighted $\ell_{p}$-norms with rigorous performance guarantees. Our algorithms are quite practical, and their variants can be implemented to run fast in practice.

We give improved algorithms for the $\ell_{p}$-regression problem, $\min_{x} \|x\|_{p}$ such that $A x=b,$ for all $p \in (1,2) \cup (2,\infty).$ Our algorithms obtain a high accuracy solution in $\tilde{O}_{p}(m^{\frac{|p-2|}{2p + |p-2|}}) \le \tilde{O}_{p}(m^{\frac{1}{3}})$ iterations, where each iteration requires solving an $m \times m$ linear system, $m$ being the dimension of the ambient space. By maintaining an approximate inverse of the linear systems that we solve in each iteration, we give algorithms for solving $\ell_{p}$-regression to $1 / \text{poly}(n)$ accuracy that run in time $\tilde{O}_p(m^{\max\{\omega, 7/3\}}),$ where $\omega$ is the matrix multiplication constant. For the current best value of $\omega > 2.37$, we can thus solve $\ell_{p}$ regression as fast as $\ell_{2}$ regression, for all constant $p$ bounded away from $1.$ Our algorithms can be combined with fast graph Laplacian linear equation solvers to give minimum $\ell_{p}$-norm flow / voltage solutions to $1 / \text{poly}(n)$ accuracy on an undirected graph with $m$ edges in $\tilde{O}_{p}(m^{1 + \frac{|p-2|}{2p + |p-2|}}) \le \tilde{O}_{p}(m^{\frac{4}{3}})$ time. For sparse graphs and for matrices with similar dimensions, our iteration counts and running times improve on the $p$-norm regression algorithm by [Bubeck-Cohen-Lee-Li STOC`18] and general-purpose convex optimization algorithms. At the core of our algorithms is an iterative refinement scheme for $\ell_{p}$-norms, using the smoothed $\ell_{p}$-norms introduced in the work of Bubeck et al. Given an initial solution, we construct a problem that seeks to minimize a quadratically-smoothed $\ell_{p}$ norm over a subspace, such that a crude solution to this problem allows us to improve the initial solution by a constant factor, leading to algorithms with fast convergence. 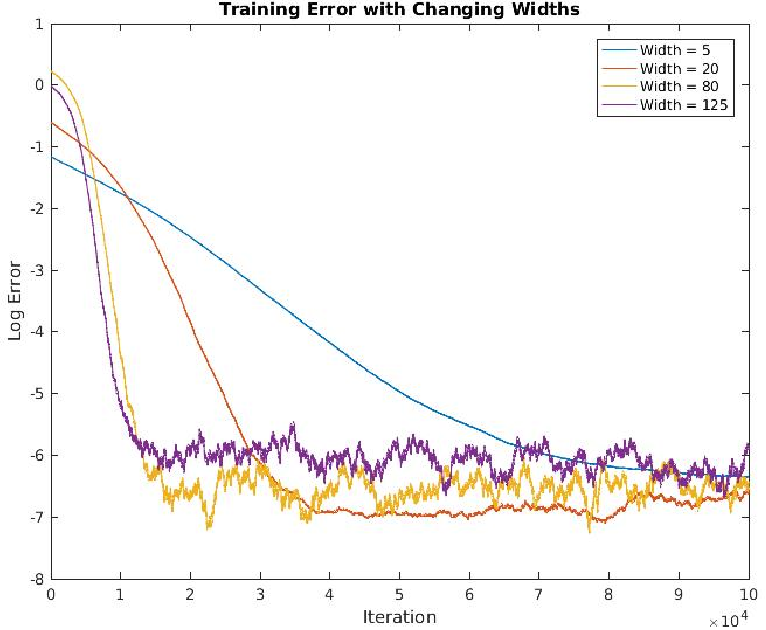 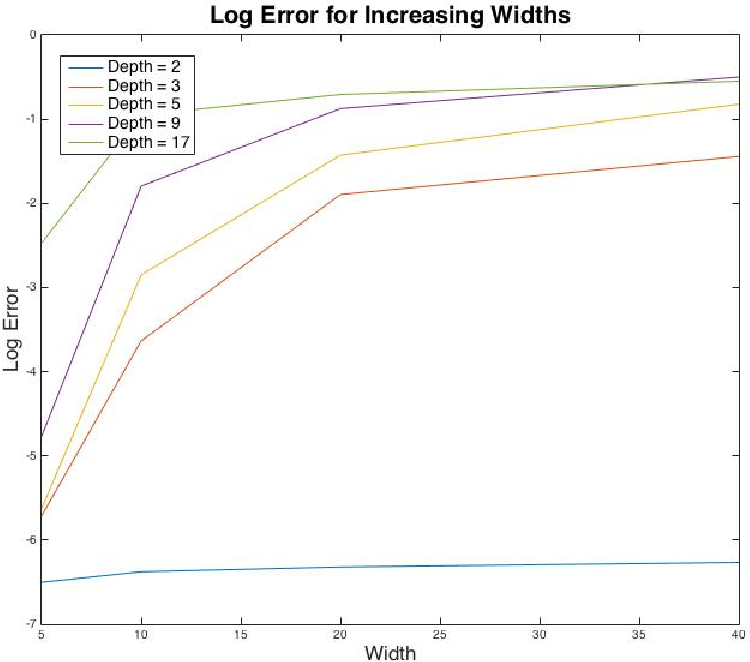 We study whether a depth two neural network can learn another depth two network using gradient descent. Assuming a linear output node, we show that the question of whether gradient descent converges to the target function is equivalent to the following question in electrodynamics: Given $k$ fixed protons in $\mathbb{R}^d,$ and $k$ electrons, each moving due to the attractive force from the protons and repulsive force from the remaining electrons, whether at equilibrium all the electrons will be matched up with the protons, up to a permutation. Under the standard electrical force, this follows from the classic Earnshaw's theorem. In our setting, the force is determined by the activation function and the input distribution. Building on this equivalence, we prove the existence of an activation function such that gradient descent learns at least one of the hidden nodes in the target network. Iterating, we show that gradient descent can be used to learn the entire network one node at a time.

Algorithms for Lipschitz Learning on Graphs 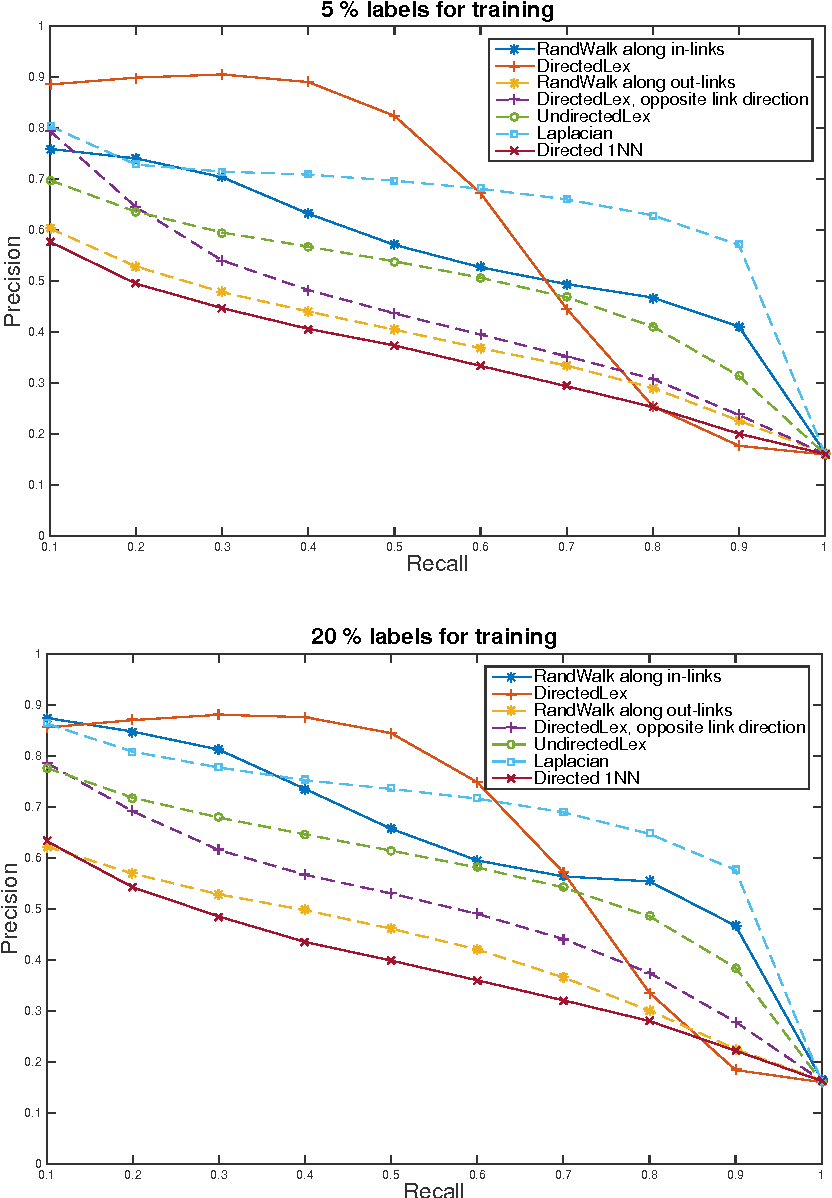 
* Code used in this work is available at https://github.com/danspielman/YINSlex 30 pages

Provable ICA with Unknown Gaussian Noise, and Implications for Gaussian Mixtures and Autoencoders

We present a new algorithm for Independent Component Analysis (ICA) which has provable performance guarantees. In particular, suppose we are given samples of the form $y = Ax + \eta$ where $A$ is an unknown $n \times n$ matrix and $x$ is a random variable whose components are independent and have a fourth moment strictly less than that of a standard Gaussian random variable and $\eta$ is an $n$-dimensional Gaussian random variable with unknown covariance $\Sigma$: We give an algorithm that provable recovers $A$ and $\Sigma$ up to an additive $\epsilon$ and whose running time and sample complexity are polynomial in $n$ and $1 / \epsilon$. To accomplish this, we introduce a novel "quasi-whitening" step that may be useful in other contexts in which the covariance of Gaussian noise is not known in advance. We also give a general framework for finding all local optima of a function (given an oracle for approximately finding just one) and this is a crucial step in our algorithm, one that has been overlooked in previous attempts, and allows us to control the accumulation of error when we find the columns of $A$ one by one via local search.

Which Algorithmic Choices Matter at Which Batch Sizes? Insights From a Noisy Quadratic Model 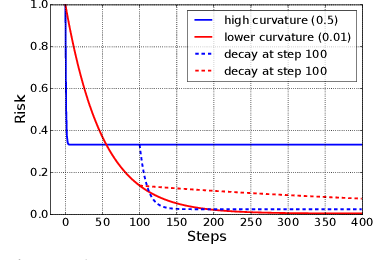 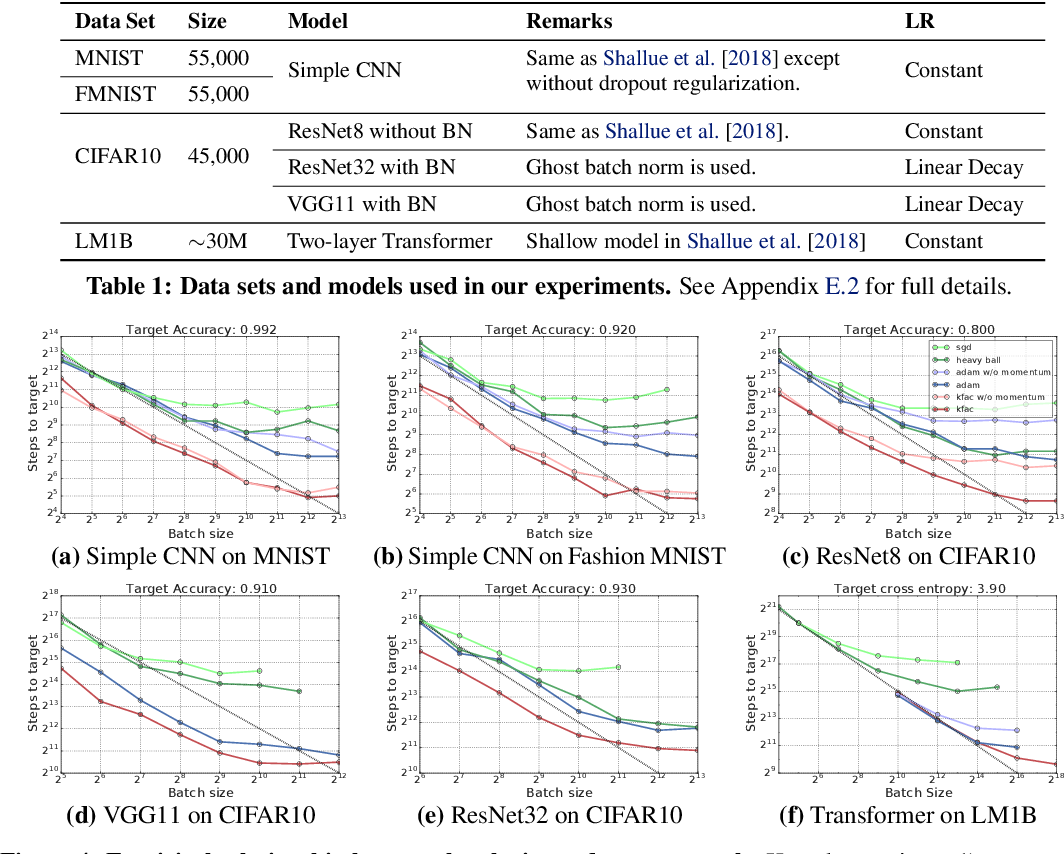 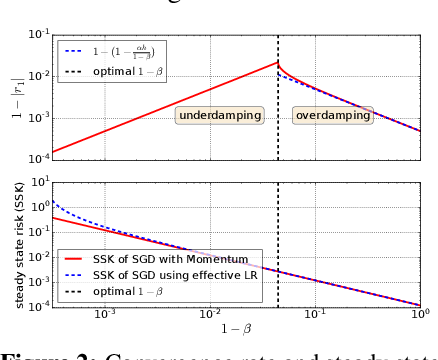 Increasing the batch size is a popular way to speed up neural network training, but beyond some critical batch size, larger batch sizes yield diminishing returns. In this work, we study how the critical batch size changes based on properties of the optimization algorithm, including acceleration and preconditioning, through two different lenses: large scale experiments, and analysis of a simple noisy quadratic model (NQM). We experimentally demonstrate that optimization algorithms that employ preconditioning, specifically Adam and K-FAC, result in much larger critical batch sizes than stochastic gradient descent with momentum. We also demonstrate that the NQM captures many of the essential features of real neural network training, despite being drastically simpler to work with. The NQM predicts our results with preconditioned optimizers, previous results with accelerated gradient descent, and other results around optimal learning rates and large batch training, making it a useful tool to generate testable predictions about neural network optimization.