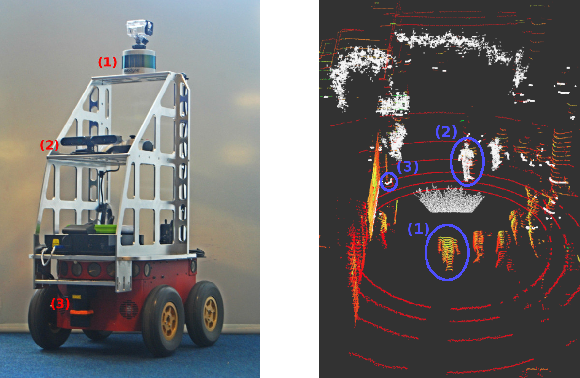 Human detection and tracking is an essential task for service robots, where the combined use of multiple sensors has potential advantages that are yet to be exploited. In this paper, we introduce a framework allowing a robot to learn a new 3D LiDAR-based human classifier from other sensors over time, taking advantage of a multisensor tracking system. The main innovation is the use of different detectors for existing sensors (i.e. RGB-D camera, 2D LiDAR) to train, online, a new 3D LiDAR-based human classifier, exploiting a so-called trajectory probability. Our framework uses this probability to check whether new detections belongs to a human trajectory, estimated by different sensors and/or detectors, and to learn a human classifier in a semi-supervised fashion. The framework has been implemented and tested on a real-world dataset collected by a mobile robot. We present experiments illustrating that our system is able to effectively learn from different sensors and from the environment, and that the performance of the 3D LiDAR-based human classification improves with the number of sensors/detectors used.

This paper presents a novel semantic mapping approach, Recurrent-OctoMap, learned from long-term 3D Lidar data. Most existing semantic mapping approaches focus on improving semantic understanding of single frames, rather than 3D refinement of semantic maps (i.e. fusing semantic observations). The most widely-used approach for 3D semantic map refinement is a Bayesian update, which fuses the consecutive predictive probabilities following a Markov-Chain model. Instead, we propose a learning approach to fuse the semantic features, rather than simply fusing predictions from a classifier. In our approach, we represent and maintain our 3D map as an OctoMap, and model each cell as a recurrent neural network (RNN), to obtain a Recurrent-OctoMap. In this case, the semantic mapping process can be formulated as a sequence-to-sequence encoding-decoding problem. Moreover, in order to extend the duration of observations in our Recurrent-OctoMap, we developed a robust 3D localization and mapping system for successively mapping a dynamic environment using more than two weeks of data, and the system can be trained and deployed with arbitrary memory length. We validate our approach on the ETH long-term 3D Lidar dataset [1]. The experimental results show that our proposed approach outperforms the conventional "Bayesian update" approach. 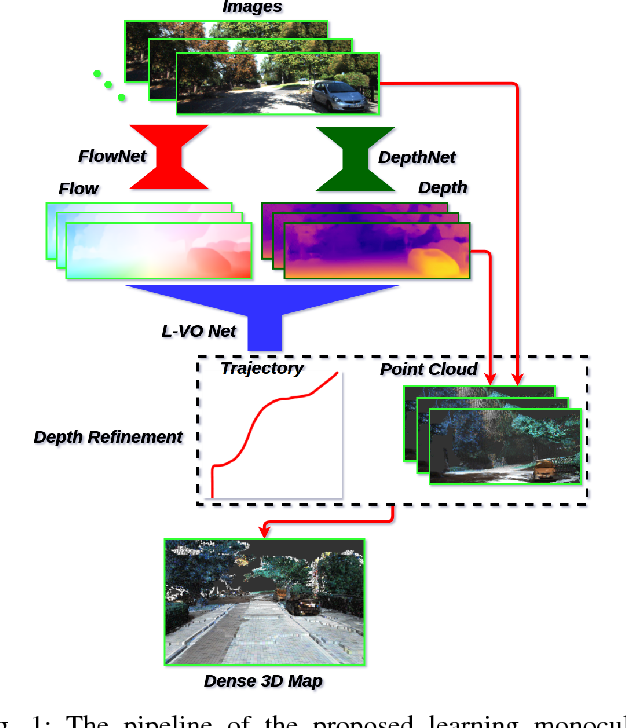 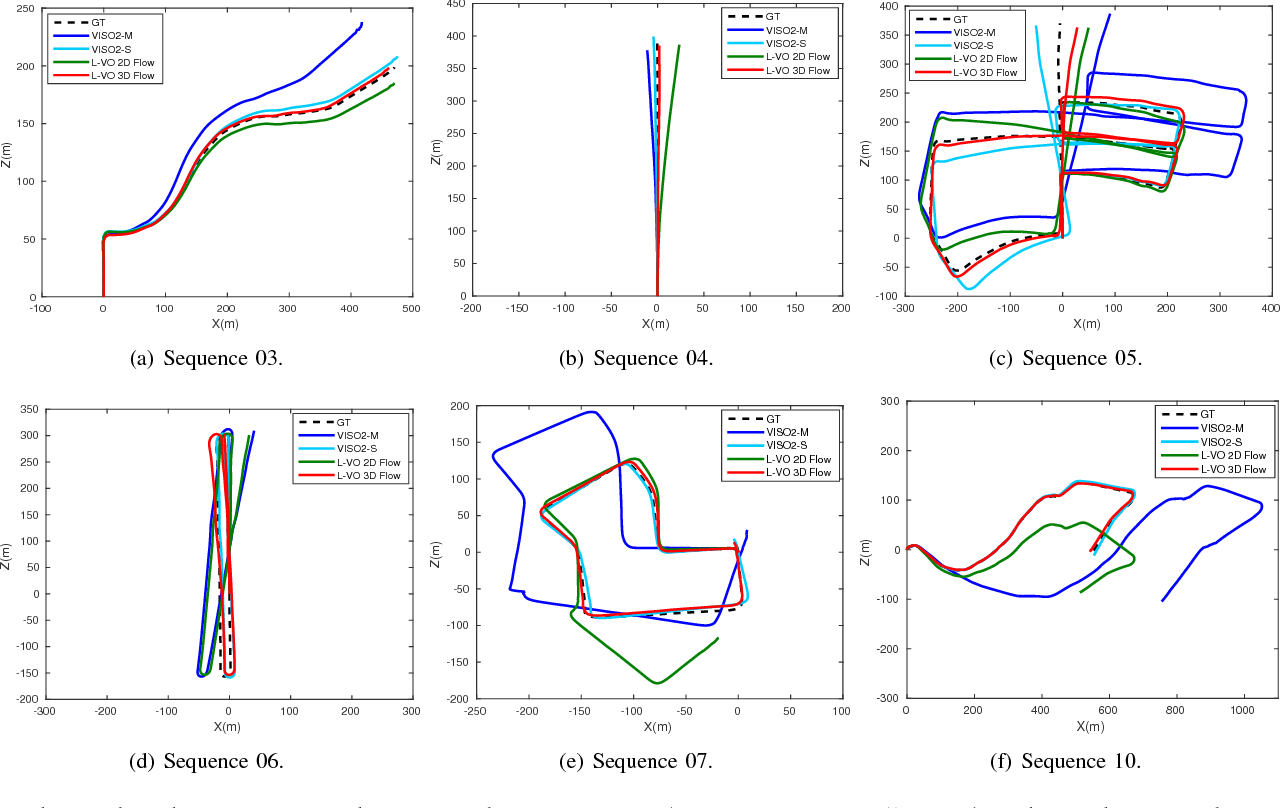 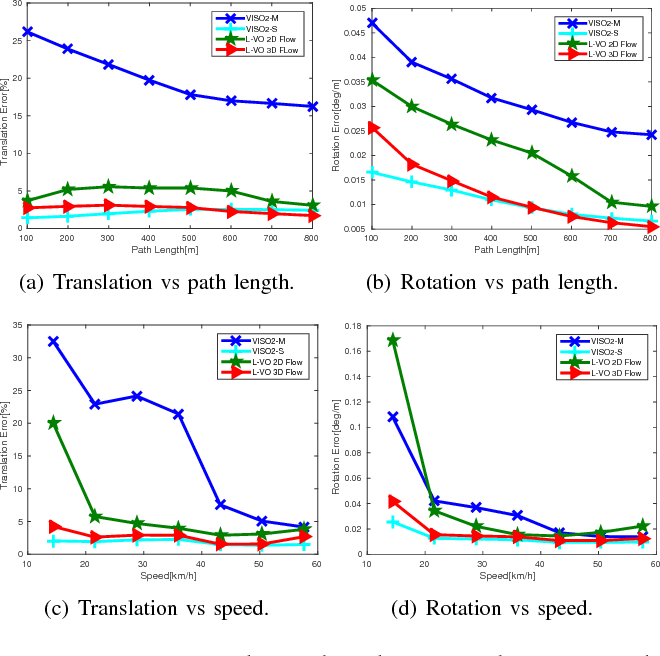 This paper introduces a fully deep learning approach to monocular SLAM, which can perform simultaneous localization using a neural network for learning visual odometry (L-VO) and dense 3D mapping. Dense 2D flow and a depth image are generated from monocular images by sub-networks, which are then used by a 3D flow associated layer in the L-VO network to generate dense 3D flow. Given this 3D flow, the dual-stream L-VO network can then predict the 6DOF relative pose and furthermore reconstruct the vehicle trajectory. In order to learn the correlation between motion directions, the Bivariate Gaussian modelling is employed in the loss function. The L-VO network achieves an overall performance of 2.68% for average translational error and 0.0143 deg/m for average rotational error on the KITTI odometry benchmark. Moreover, the learned depth is fully leveraged to generate a dense 3D map. As a result, an entire visual SLAM system, that is, learning monocular odometry combined with dense 3D mapping, is achieved. 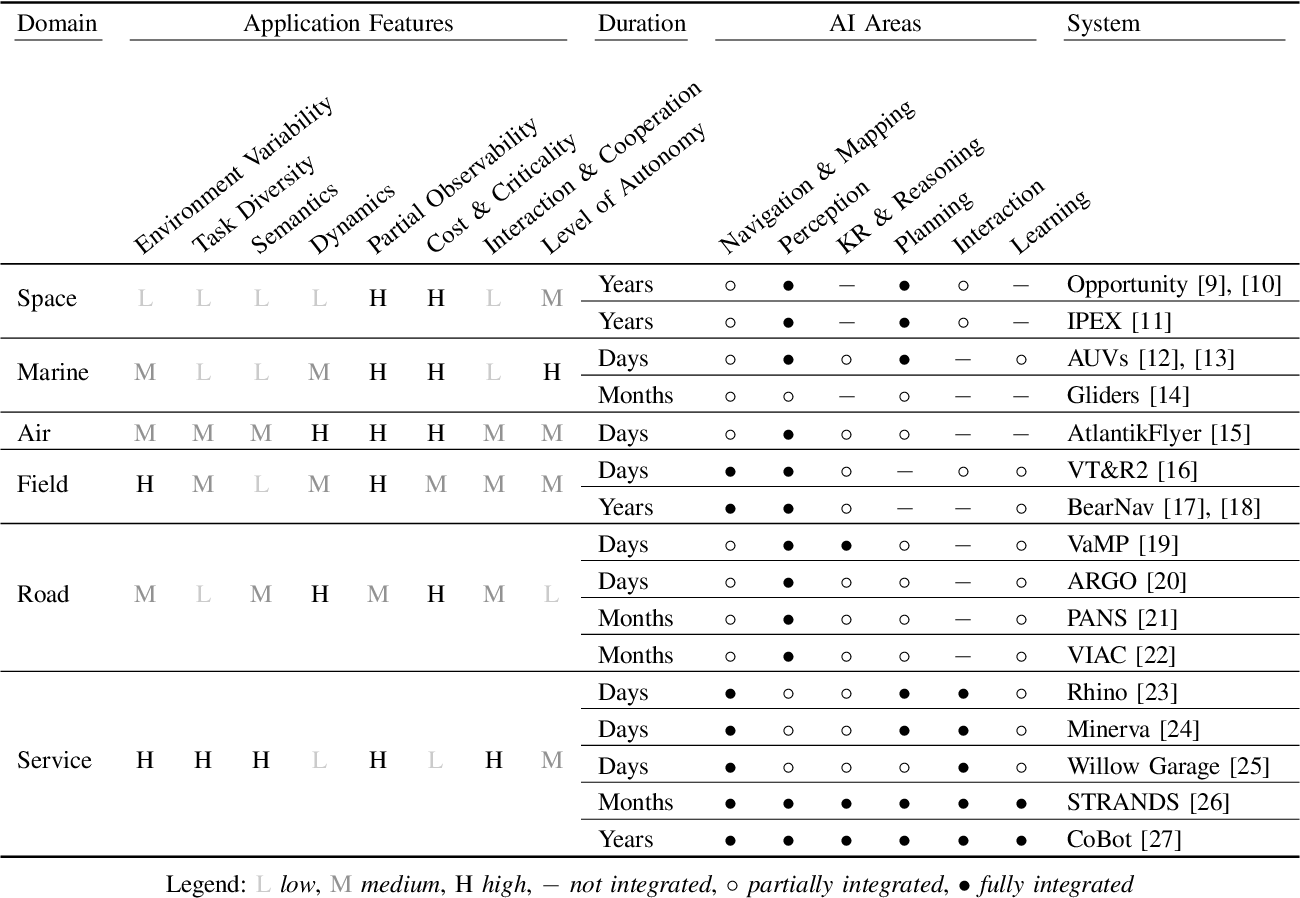 Autonomous systems will play an essential role in many applications across diverse domains including space, marine, air, field, road, and service robotics. They will assist us in our daily routines and perform dangerous, dirty and dull tasks. However, enabling robotic systems to perform autonomously in complex, real-world scenarios over extended time periods (i.e. weeks, months, or years) poses many challenges. Some of these have been investigated by sub-disciplines of Artificial Intelligence (AI) including navigation & mapping, perception, knowledge representation & reasoning, planning, interaction, and learning. The different sub-disciplines have developed techniques that, when re-integrated within an autonomous system, can enable robots to operate effectively in complex, long-term scenarios. In this paper, we survey and discuss AI techniques as 'enablers' for long-term robot autonomy, current progress in integrating these techniques within long-running robotic systems, and the future challenges and opportunities for AI in long-term autonomy. 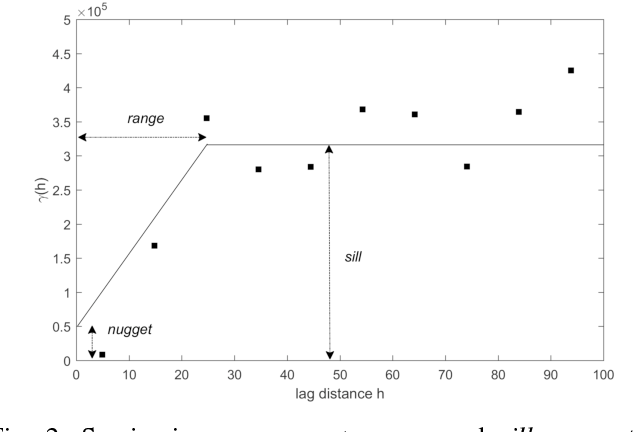 This paper presents an automated method for creating spatial maps of soil condition with an outdoor mobile robot. Effective soil mapping on farms can enhance yields, reduce inputs and help protect the environment. Traditionally, data are collected manually at an arbitrary set of locations, then soil maps are constructed offline using Kriging, a form of Gaussian process regression. This process is laborious and costly, limiting the quality and resolution of the resulting information. Instead, we propose to use an outdoor mobile robot for automatic collection of soil condition data, building soil maps online and also adapting the robot's exploration strategy on-the-fly based on the current quality of the map. We show how using Kriging variance as a reward function for robotic exploration allows for both more efficient data collection and better soil models. This work presents the theoretical foundations for our proposal and an experimental comparison of exploration strategies using soil compaction data from a field generated with a mobile robot. 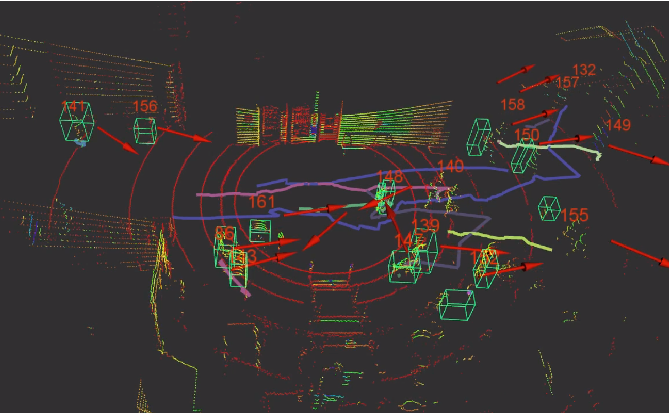 This paper presents a novel 3DOF pedestrian trajectory prediction approach for autonomous mobile service robots. While most previously reported methods are based on learning of 2D positions in monocular camera images, our approach uses range-finder sensors to learn and predict 3DOF pose trajectories (i.e. 2D position plus 1D rotation within the world coordinate system). Our approach, T-Pose-LSTM (Temporal 3DOF-Pose Long-Short-Term Memory), is trained using long-term data from real-world robot deployments and aims to learn context-dependent (environment- and time-specific) human activities. Our approach incorporates long-term temporal information (i.e. date and time) with short-term pose observations as input. A sequence-to-sequence LSTM encoder-decoder is trained, which encodes observations into LSTM and then decodes as predictions. For deployment, it can perform on-the-fly prediction in real-time. Instead of using manually annotated data, we rely on a robust human detection, tracking and SLAM system, providing us with examples in a global coordinate system. We validate the approach using more than 15K pedestrian trajectories recorded in a care home environment over a period of three months. The experiment shows that the proposed T-Pose-LSTM model advances the state-of-the-art 2D-based method for human trajectory prediction in long-term mobile robot deployments. 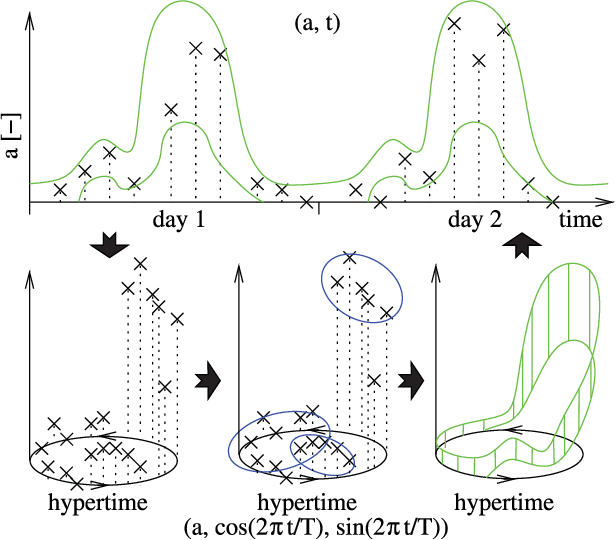 This paper presents a novel method for introducing time into discrete and continuous spatial representations used in mobile robotics, by modelling long-term, pseudo-periodic variations caused by human activities. Unlike previous approaches, the proposed method does not treat time and space separately, and its continuous nature respects both the temporal and spatial continuity of the modeled phenomena. The method extends the given spatial model with a set of wrapped dimensions that represent the periodicities of observed changes. By performing clustering over this extended representation, we obtain a model that allows us to predict future states of both discrete and continuous spatial representations. We apply the proposed algorithm to several long-term datasets and show that the method enables a robot to predict future states of repre- sentations with different dimensions. The experiments further show that the method achieves more accurate predictions than the previous state of the art. 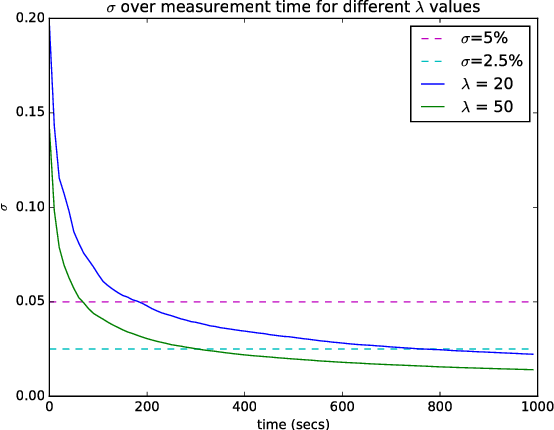 Soil moisture monitoring is a fundamental process to enhance agricultural outcomes and to protect the environment. The traditional methods for measuring moisture content in soil are laborious and expensive, and therefore there is a growing interest in developing sensors and technologies which can reduce the effort and costs. In this work, we propose to use an autonomous mobile robot equipped with a state-of-the-art non-contact soil moisture sensor that builds moisture maps on the fly and automatically selects the most optimal sampling locations. The robot is guided by an autonomous exploration strategy driven by the quality of the soil moisture model which indicates areas of the field where the information is less precise. The sensor model follows the Poisson distribution and we demonstrate how to integrate such measurements into the kriging framework. We also investigate a range of different exploration strategies and assess their usefulness through a set of evaluation experiments based on real soil moisture data collected from two different fields. We demonstrate the benefits of using the adaptive measurement interval and adaptive sampling strategies for building better quality soil moisture models. The presented method is general and can be applied to other scenarios where the measured phenomena directly affects the acquisition time and needs to be spatially mapped.

Agri-Food is the largest manufacturing sector in the UK. It supports a food chain that generates over {\pounds}108bn p.a., with 3.9m employees in a truly international industry and exports {\pounds}20bn of UK manufactured goods. However, the global food chain is under pressure from population growth, climate change, political pressures affecting migration, population drift from rural to urban regions and the demographics of an aging global population. These challenges are recognised in the UK Industrial Strategy white paper and backed by significant investment via a Wave 2 Industrial Challenge Fund Investment ("Transforming Food Production: from Farm to Fork"). Robotics and Autonomous Systems (RAS) and associated digital technologies are now seen as enablers of this critical food chain transformation. To meet these challenges, this white paper reviews the state of the art in the application of RAS in Agri-Food production and explores research and innovation needs to ensure these technologies reach their full potential and deliver the necessary impacts in the Agri-Food sector. 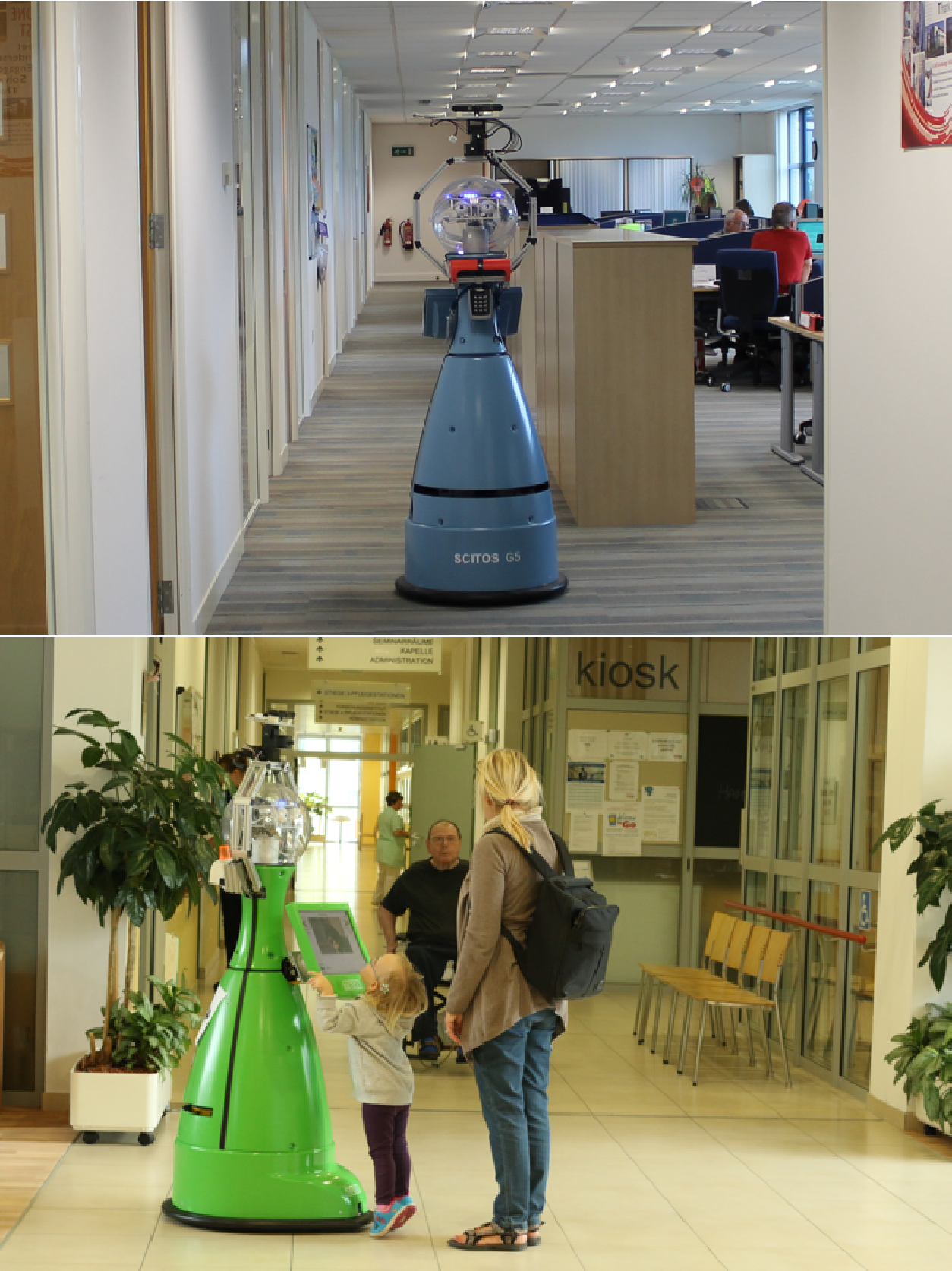 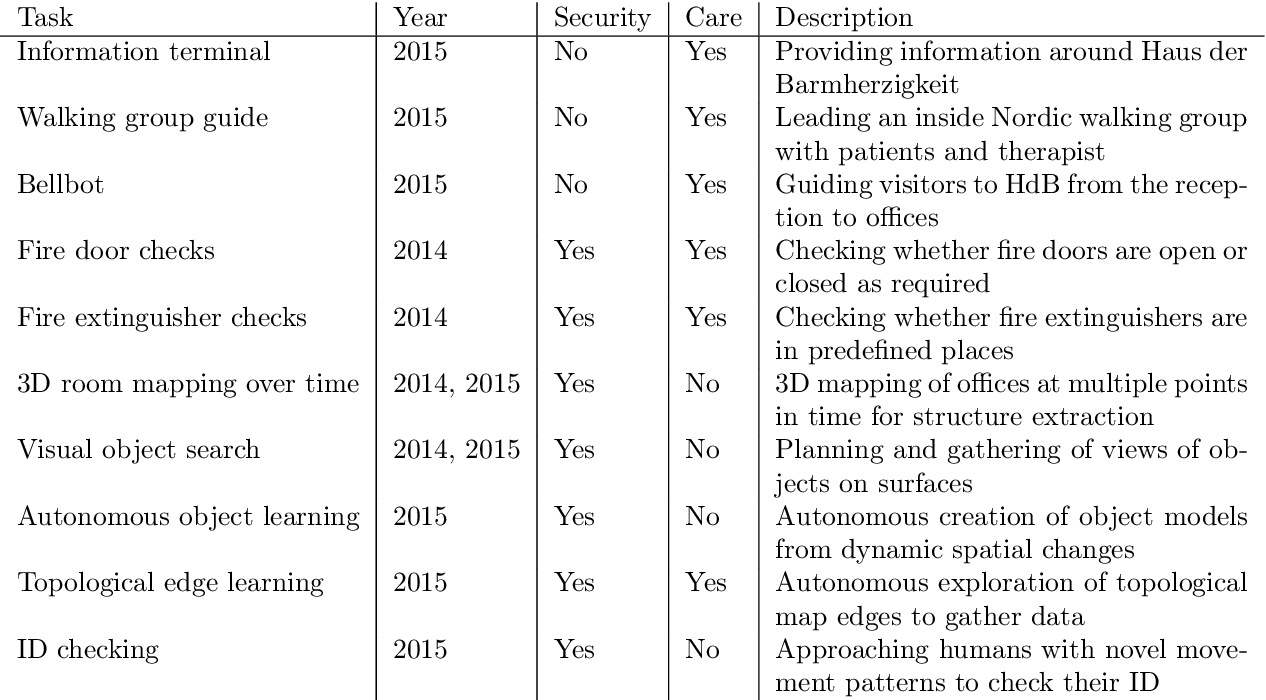 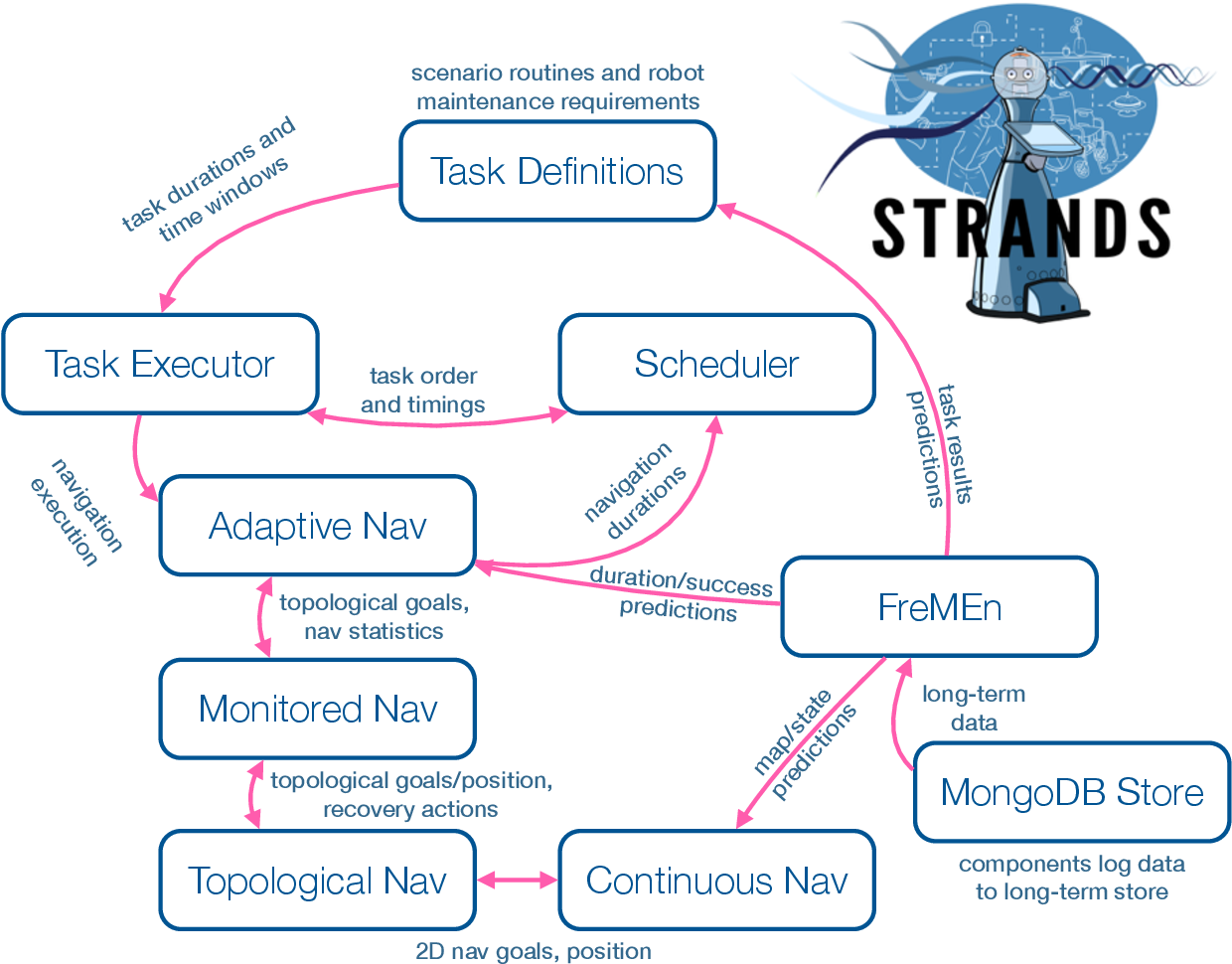 Thanks to the efforts of the robotics and autonomous systems community, robots are becoming ever more capable. There is also an increasing demand from end-users for autonomous service robots that can operate in real environments for extended periods. In the STRANDS project we are tackling this demand head-on by integrating state-of-the-art artificial intelligence and robotics research into mobile service robots, and deploying these systems for long-term installations in security and care environments. Over four deployments, our robots have been operational for a combined duration of 104 days autonomously performing end-user defined tasks, covering 116km in the process. In this article we describe the approach we have used to enable long-term autonomous operation in everyday environments, and how our robots are able to use their long run times to improve their own performance.