Learning from Multiple Cities: A Meta-Learning Approach for Spatial-Temporal Prediction 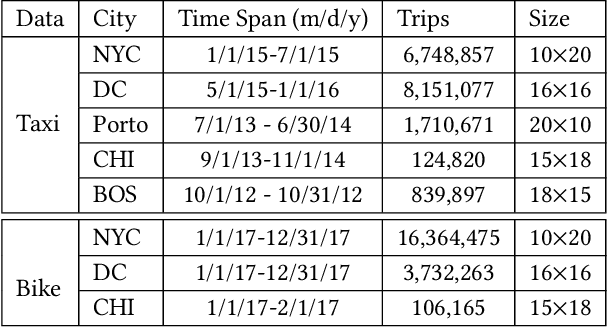 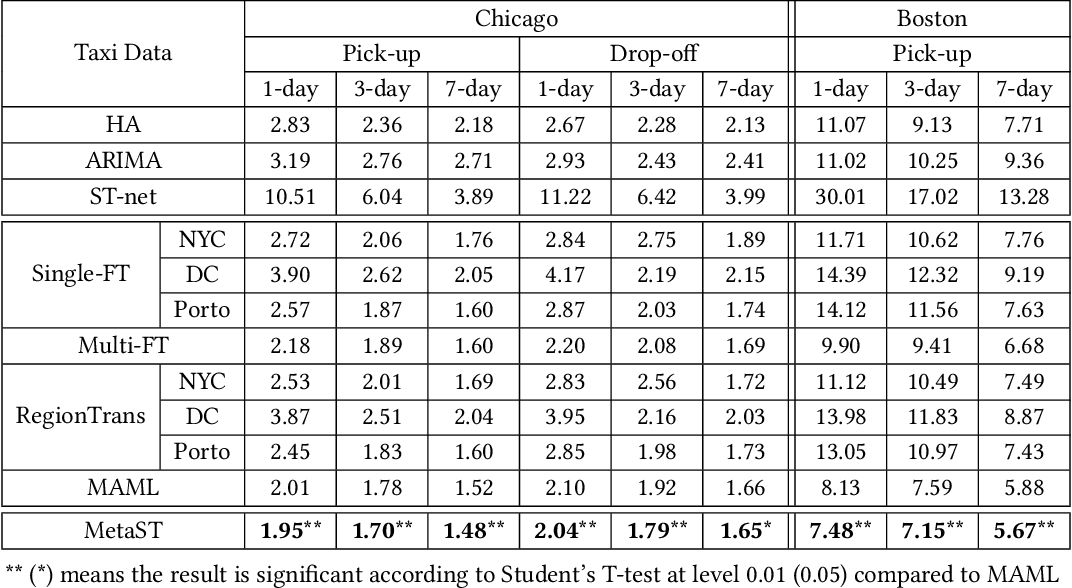 Spatial-temporal prediction is a fundamental problem for constructing smart city, which is useful for tasks such as traffic control, taxi dispatching, and environmental policy making. Due to data collection mechanism, it is common to see data collection with unbalanced spatial distributions. For example, some cities may release taxi data for multiple years while others only release a few days of data; some regions may have constant water quality data monitored by sensors whereas some regions only have a small collection of water samples. In this paper, we tackle the problem of spatial-temporal prediction for the cities with only a short period of data collection. We aim to utilize the long-period data from other cities via transfer learning. Different from previous studies that transfer knowledge from one single source city to a target city, we are the first to leverage information from multiple cities to increase the stability of transfer. Specifically, our proposed model is designed as a spatial-temporal network with a meta-learning paradigm. The meta-learning paradigm learns a well-generalized initialization of the spatial-temporal network, which can be effectively adapted to target cities. In addition, a pattern-based spatial-temporal memory is designed to distill long-term temporal information (i.e., periodicity). We conduct extensive experiments on two tasks: traffic (taxi and bike) prediction and water quality prediction. The experiments demonstrate the effectiveness of our proposed model over several competitive baseline models. 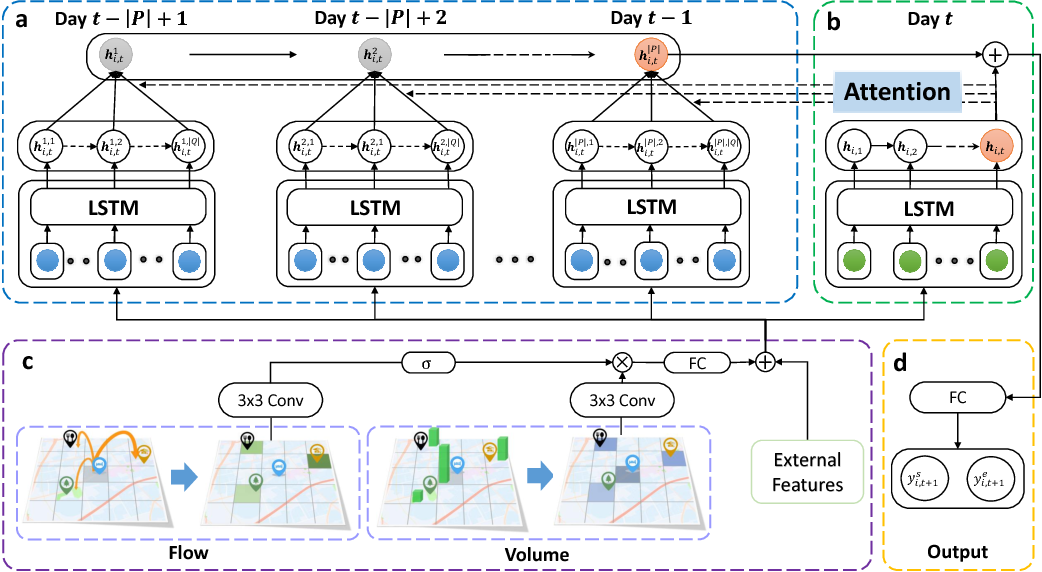 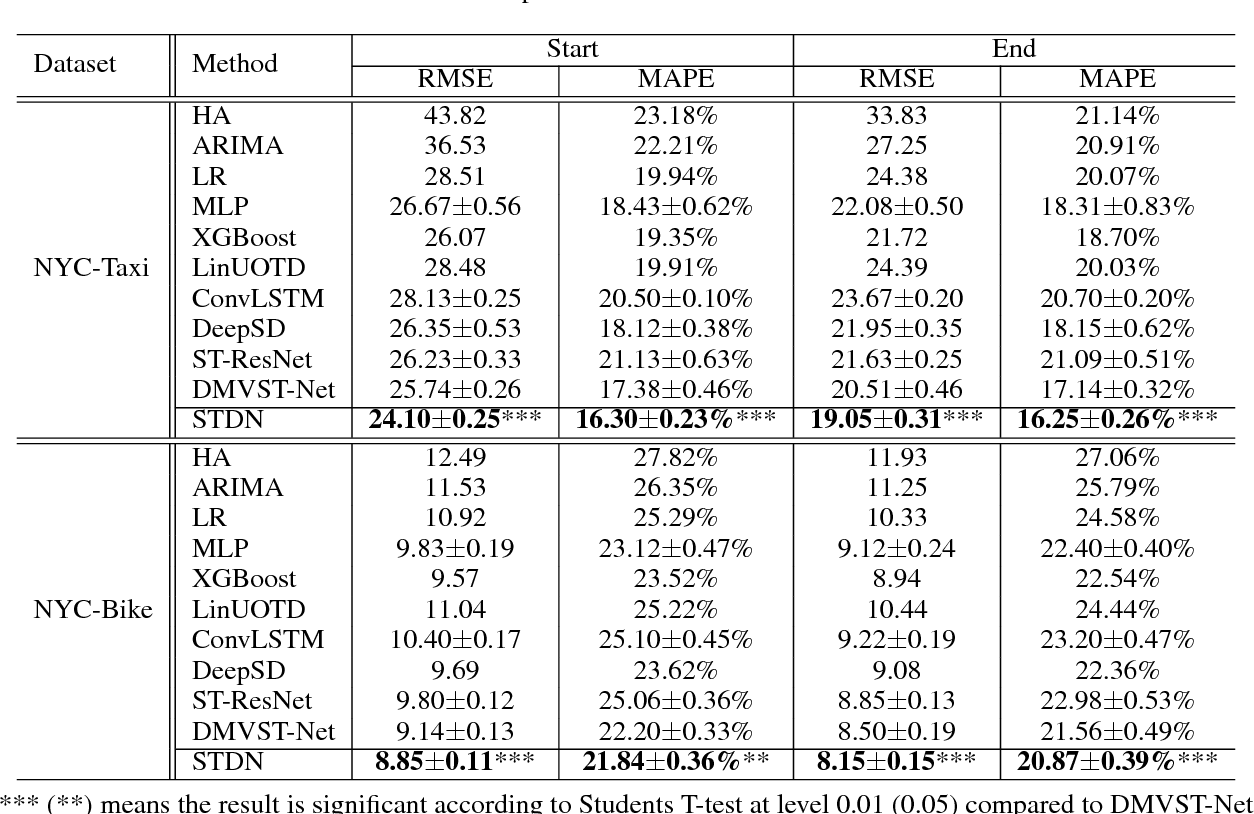 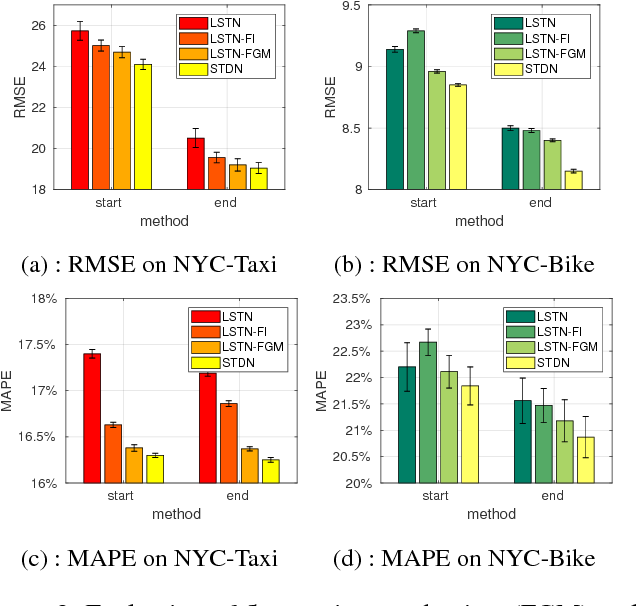 Traffic prediction has drawn increasing attention in AI research field due to the increasing availability of large-scale traffic data and its importance in the real world. For example, an accurate taxi demand prediction can assist taxi companies in pre-allocating taxis. The key challenge of traffic prediction lies in how to model the complex spatial dependencies and temporal dynamics. Although both factors have been considered in modeling, existing works make strong assumptions about spatial dependence and temporal dynamics, i.e., spatial dependence is stationary in time, and temporal dynamics is strictly periodical. However, in practice, the spatial dependence could be dynamic (i.e., changing from time to time), and the temporal dynamics could have some perturbation from one period to another period. In this paper, we make two important observations: (1) the spatial dependencies between locations are dynamic; and (2) the temporal dependency follows daily and weekly pattern but it is not strictly periodic for its dynamic temporal shifting. To address these two issues, we propose a novel Spatial-Temporal Dynamic Network (STDN), in which a flow gating mechanism is introduced to learn the dynamic similarity between locations, and a periodically shifted attention mechanism is designed to handle long-term periodic temporal shifting. To the best of our knowledge, this is the first work that tackles both issues in a unified framework. Our experimental results on real-world traffic datasets verify the effectiveness of the proposed method. 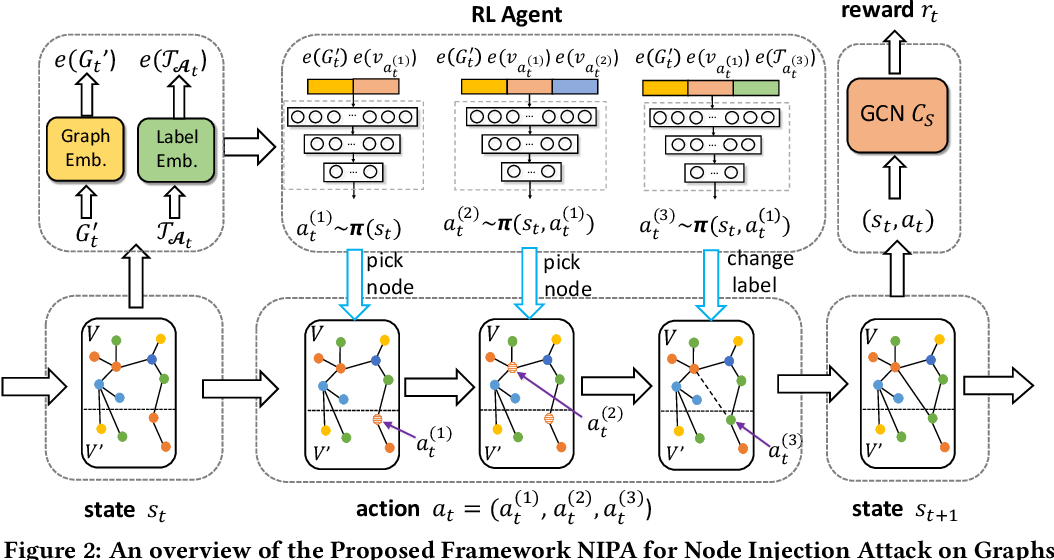 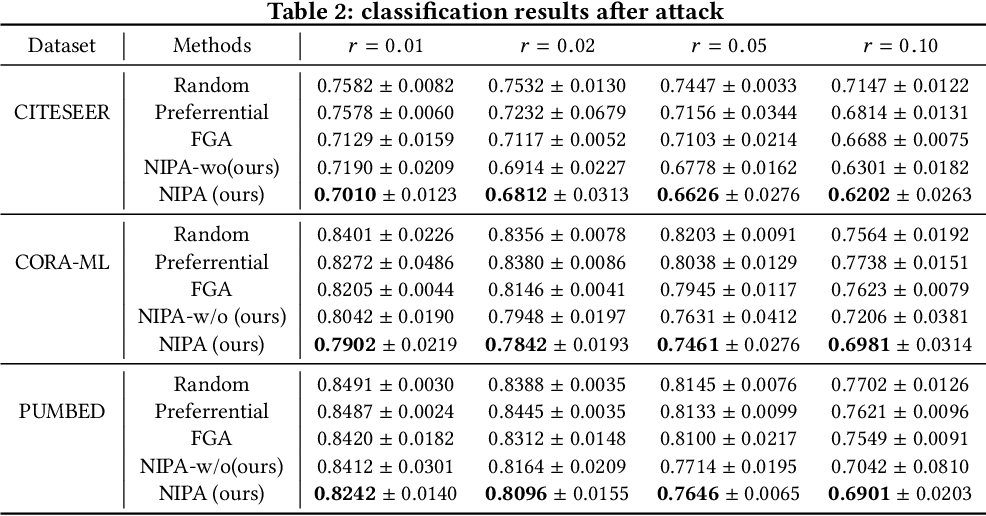 Real-world graph applications, such as advertisements and product recommendations make profits based on accurately classify the label of the nodes. However, in such scenarios, there are high incentives for the adversaries to attack such graph to reduce the node classification performance. Previous work on graph adversarial attacks focus on modifying existing graph structures, which is infeasible in most real-world applications. In contrast, it is more practical to inject adversarial nodes into existing graphs, which can also potentially reduce the performance of the classifier. In this paper, we study the novel node injection poisoning attacks problem which aims to poison the graph. We describe a reinforcement learning based method, namely NIPA, to sequentially modify the adversarial information of the injected nodes. We report the results of experiments using several benchmark data sets that show the superior performance of the proposed method NIPA, relative to the existing state-of-the-art methods. 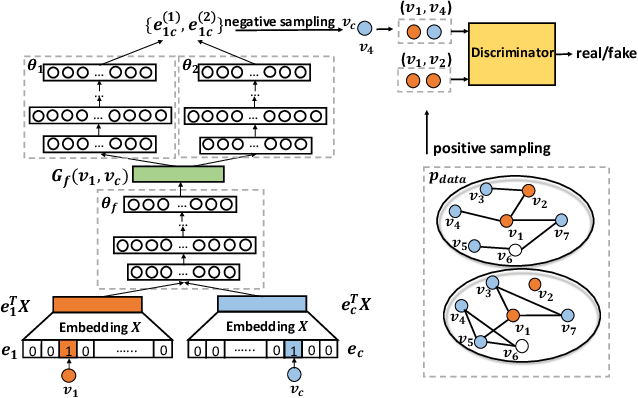 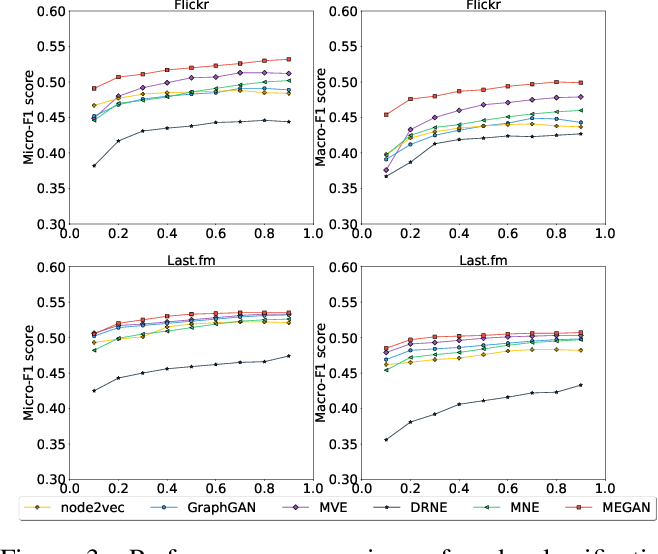 Data from many real-world applications can be naturally represented by multi-view networks where the different views encode different types of relationships (e.g., friendship, shared interests in music, etc.) between real-world individuals or entities. There is an urgent need for methods to obtain low-dimensional, information preserving and typically nonlinear embeddings of such multi-view networks. However, most of the work on multi-view learning focuses on data that lack a network structure, and most of the work on network embeddings has focused primarily on single-view networks. Against this background, we consider the multi-view network representation learning problem, i.e., the problem of constructing low-dimensional information preserving embeddings of multi-view networks. Specifically, we investigate a novel Generative Adversarial Network (GAN) framework for Multi-View Network Embedding, namely MEGAN, aimed at preserving the information from the individual network views, while accounting for connectivity across (and hence complementarity of and correlations between) different views. The results of our experiments on two real-world multi-view data sets show that the embeddings obtained using MEGAN outperform the state-of-the-art methods on node classification, link prediction and visualization tasks. 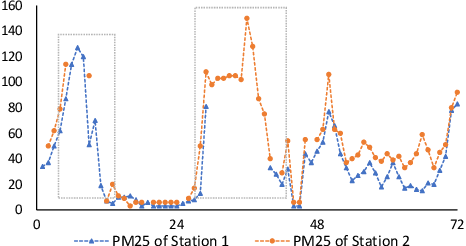 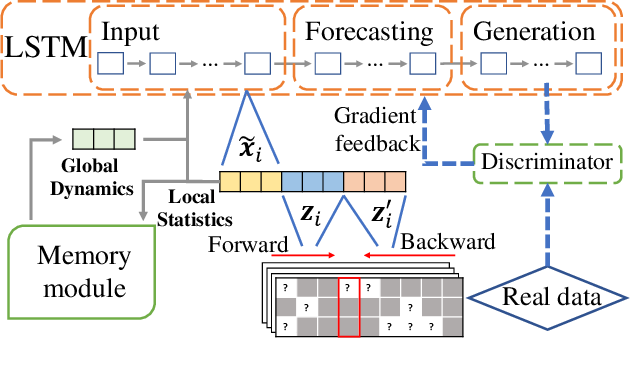 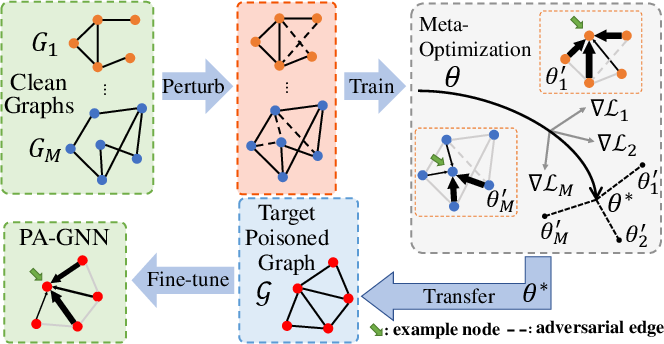 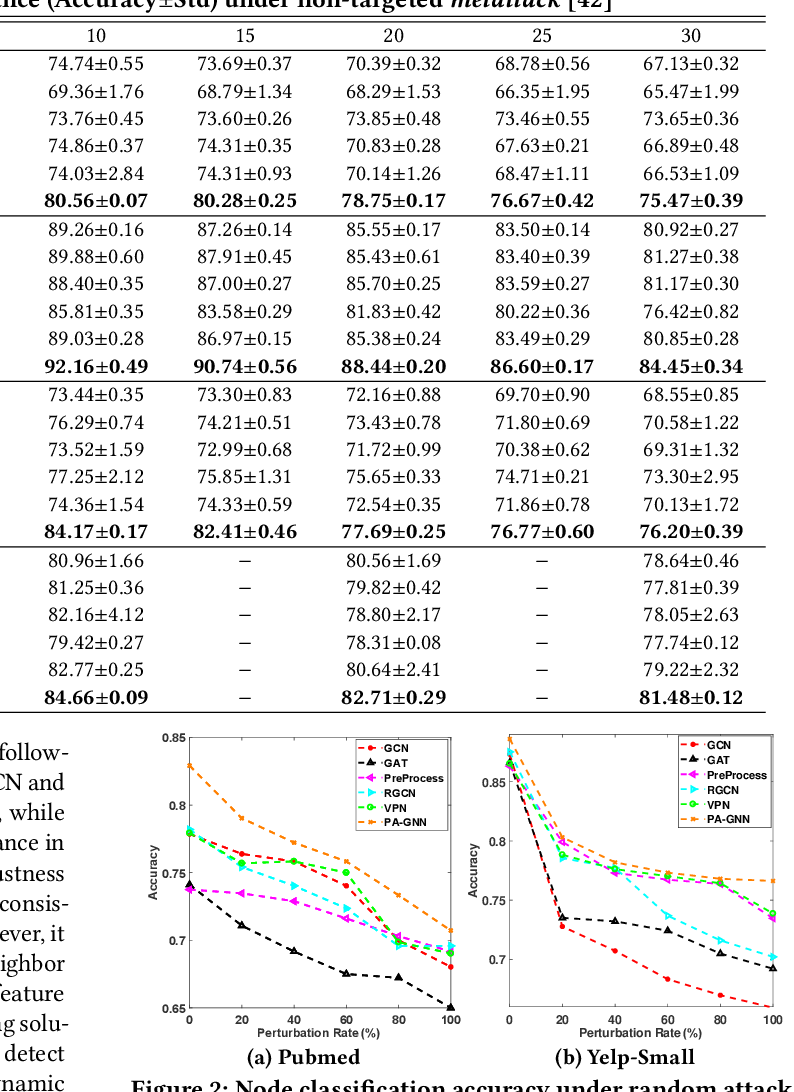 Graph neural networks (GNNs) are widely used in many applications. However, their robustness against adversarial attacks is criticized. Prior studies show that using unnoticeable modifications on graph topology or nodal features can significantly reduce the performances of GNNs. It is very challenging to design robust graph neural networks against poisoning attack and several efforts have been taken. Existing work aims at reducing the negative impact from adversarial edges only with the poisoned graph, which is sub-optimal since they fail to discriminate adversarial edges from normal ones. On the other hand, clean graphs from similar domains as the target poisoned graph are usually available in the real world. By perturbing these clean graphs, we create supervised knowledge to train the ability to detect adversarial edges so that the robustness of GNNs is elevated. However, such potential for clean graphs is neglected by existing work. To this end, we investigate a novel problem of improving the robustness of GNNs against poisoning attacks by exploring clean graphs. Specifically, we propose PA-GNN, which relies on a penalized aggregation mechanism that directly restrict the negative impact of adversarial edges by assigning them lower attention coefficients. To optimize PA-GNN for a poisoned graph, we design a meta-optimization algorithm that trains PA-GNN to penalize perturbations using clean graphs and their adversarial counterparts, and transfers such ability to improve the robustness of PA-GNN on the poisoned graph. Experimental results on four real-world datasets demonstrate the robustness of PA-GNN against poisoning attacks on graphs. 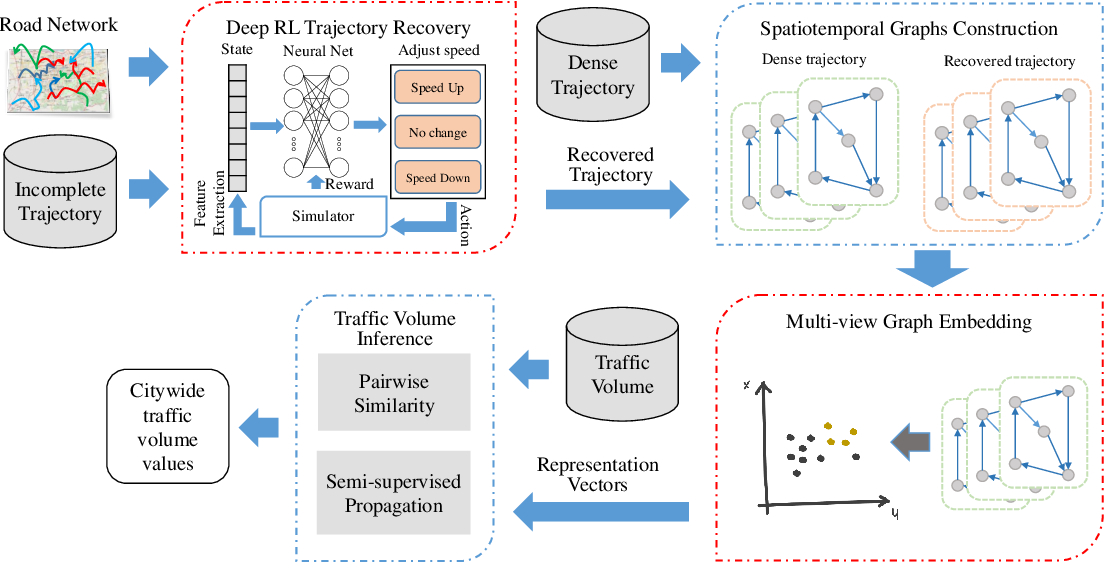 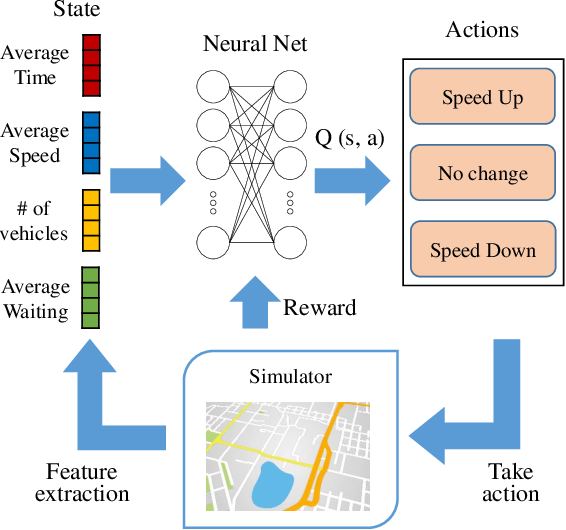 Real-time traffic volume inference is key to an intelligent city. It is a challenging task because accurate traffic volumes on the roads can only be measured at certain locations where sensors are installed. Moreover, the traffic evolves over time due to the influences of weather, events, holidays, etc. Existing solutions to the traffic volume inference problem often rely on dense GPS trajectories, which inevitably fail to account for the vehicles which carry no GPS devices or have them turned off. Consequently, the results are biased to taxicabs because they are almost always online for GPS tracking. In this paper, we propose a novel framework for the citywide traffic volume inference using both dense GPS trajectories and incomplete trajectories captured by camera surveillance systems. Our approach employs a high-fidelity traffic simulator and deep reinforcement learning to recover full vehicle movements from the incomplete trajectories. In order to jointly model the recovered trajectories and dense GPS trajectories, we construct spatiotemporal graphs and use multi-view graph embedding to encode the multi-hop correlations between road segments into real-valued vectors. Finally, we infer the citywide traffic volumes by propagating the traffic values of monitored road segments to the unmonitored ones through masked pairwise similarities. Extensive experiments with two big regions in a provincial capital city in China verify the effectiveness of our approach. 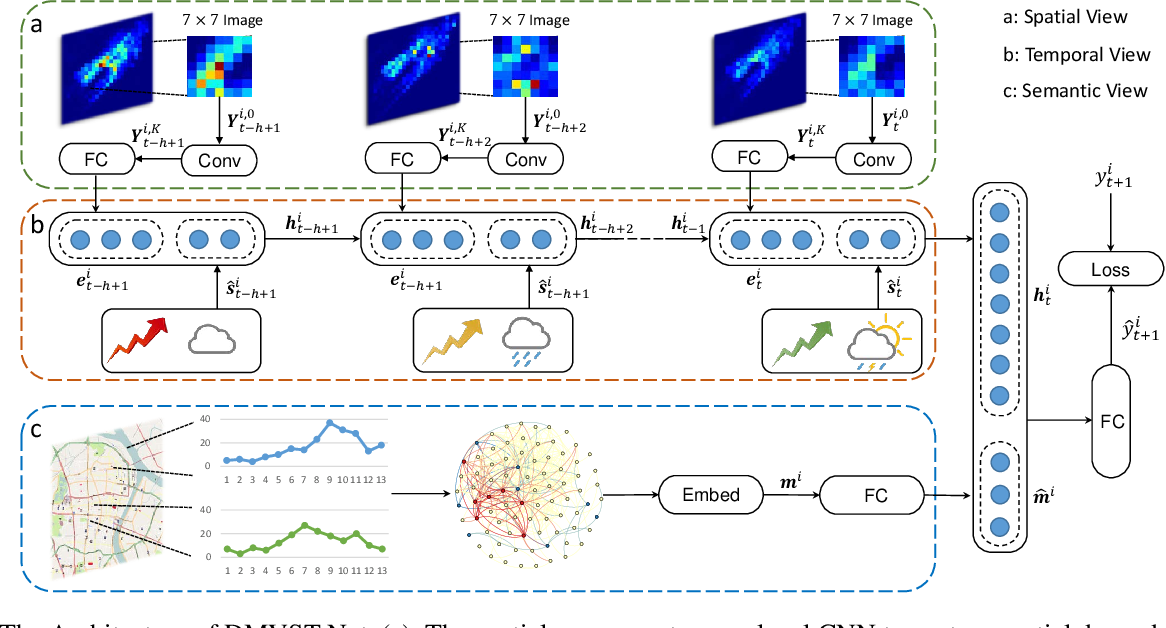 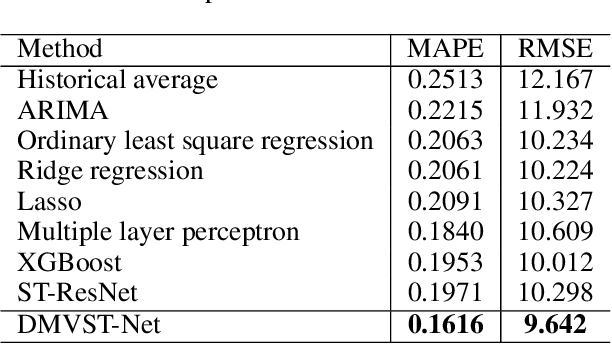 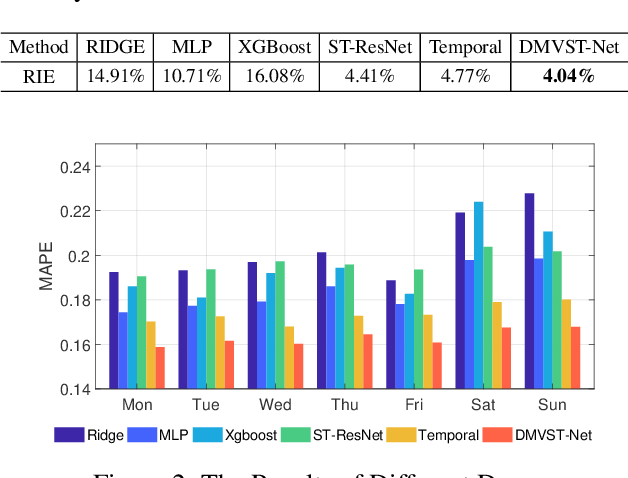