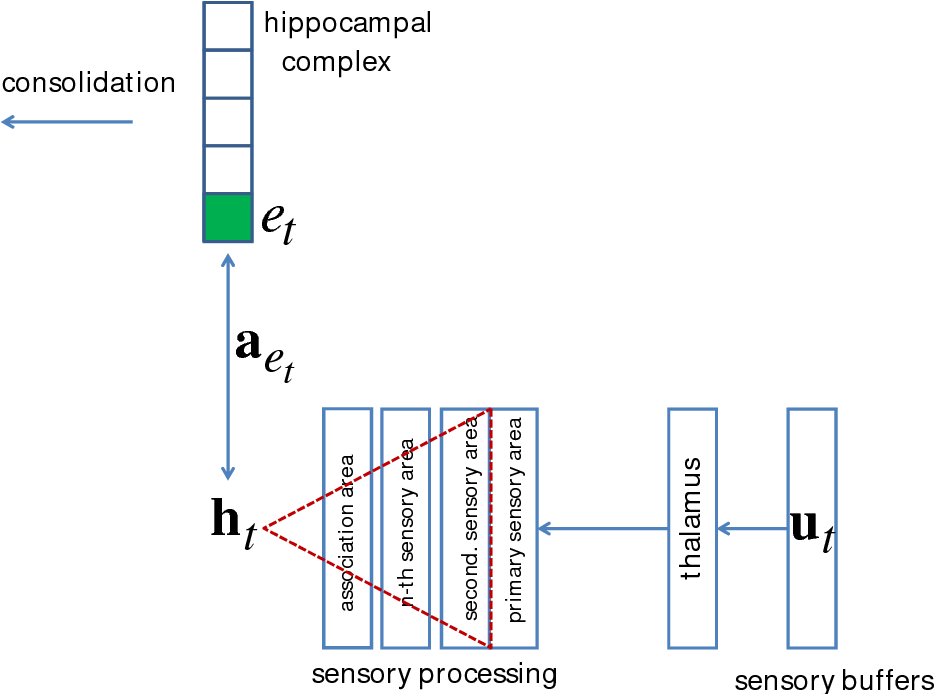 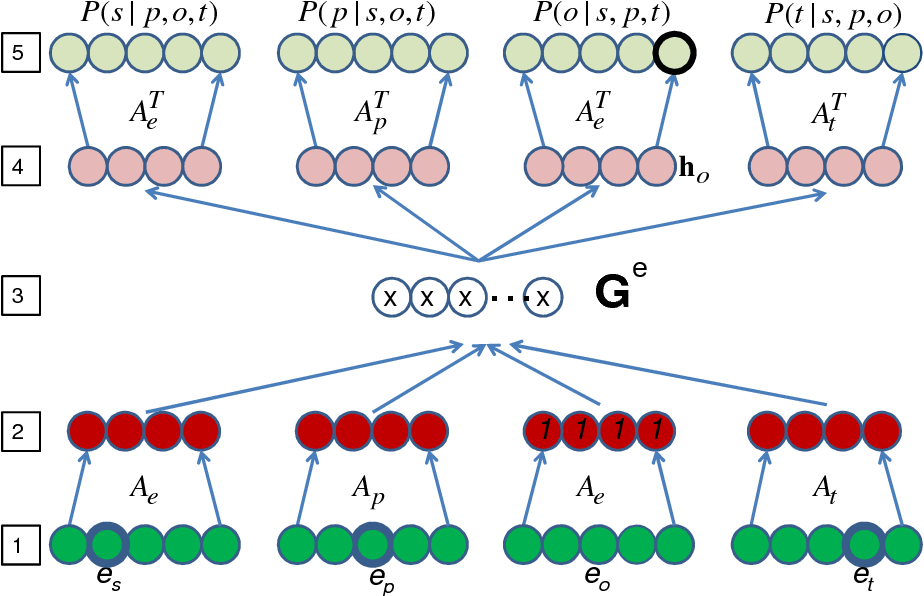 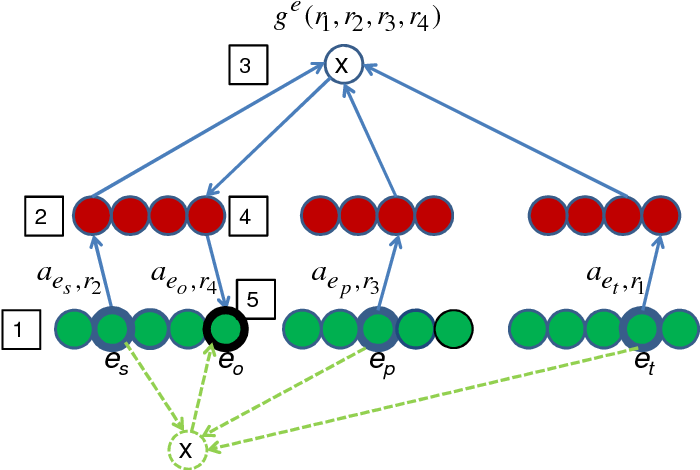 We discuss memory models which are based on tensor decompositions using latent representations of entities and events. We show how episodic memory and semantic memory can be realized and discuss how new memory traces can be generated from sensory input: Existing memories are the basis for perception and new memories are generated via perception. We relate our mathematical approach to the hippocampal memory indexing theory. We describe the first detailed mathematical models for the complete processing pipeline from sensory input and its semantic decoding, i.e., perception, to the formation of episodic and semantic memories and their declarative semantic decodings. Our main hypothesis is that perception includes an active semantic decoding process, which relies on latent representations of entities and predicates, and that episodic and semantic memories depend on the same decoding process. We contribute to the debate between the leading memory consolidation theories, i.e., the standard consolidation theory (SCT) and the multiple trace theory (MTT). The latter is closely related to the complementary learning systems (CLS) framework. In particular, we show explicitly how episodic memory can teach the neocortex to form a semantic memory, which is a core issue in MTT and CLS. 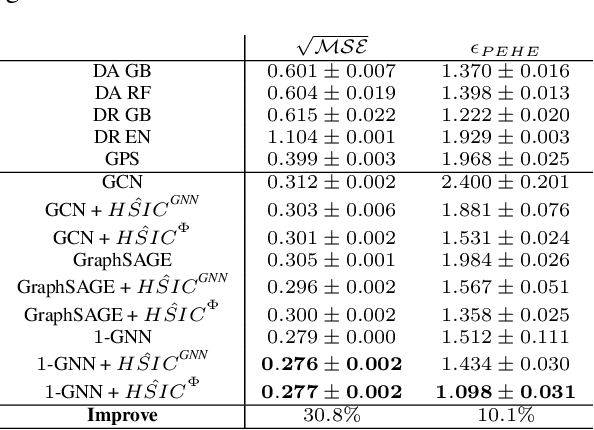 Estimating individual treatment effects from data of randomized experiments is a critical task in causal inference. The Stable Unit Treatment Value Assumption (SUTVA) is usually made in causal inference. However, interference can introduce bias when the assigned treatment on one unit affects the potential outcomes of the neighboring units. This interference phenomenon is known as spillover effect in economics or peer effect in social science. Usually, in randomized experiments or observational studies with interconnected units, one can only observe treatment responses under interference. Hence, how to estimate the superimposed causal effect and recover the individual treatment effect in the presence of interference becomes a challenging task in causal inference. In this work, we study causal effect estimation under general network interference using GNNs, which are powerful tools for capturing the dependency in the graph. After deriving causal effect estimators, we further study intervention policy improvement on the graph under capacity constraint. We give policy regret bounds under network interference and treatment capacity constraint. Furthermore, a heuristic graph structure-dependent error bound for GNN-based causal estimators is provided. 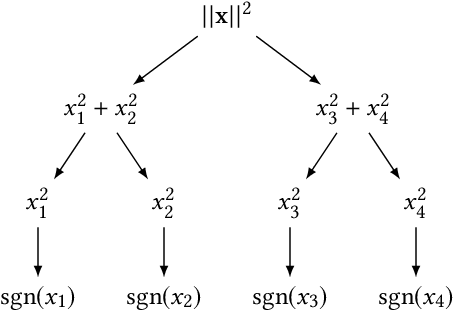 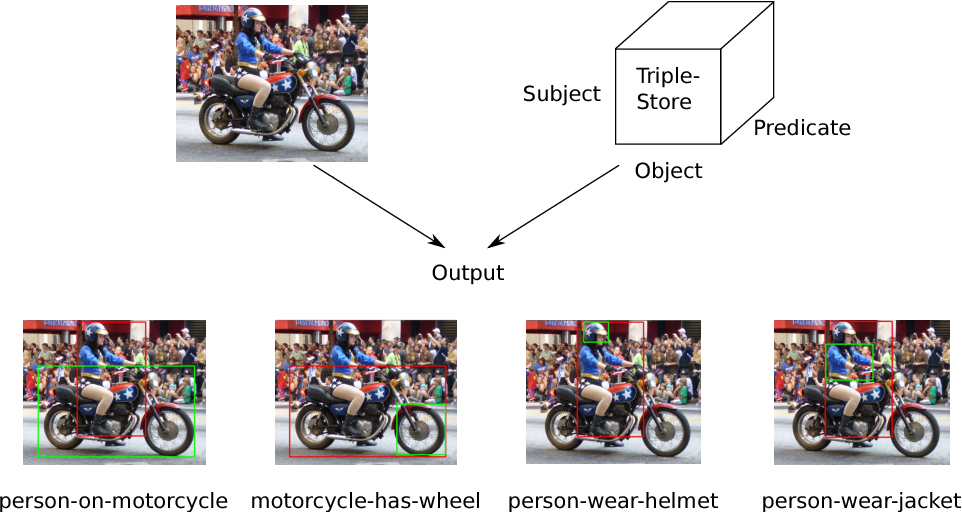 Structured scene descriptions of images are useful for the automatic processing and querying of large image databases. We show how the combination of a semantic and a visual statistical model can improve on the task of mapping images to their associated scene description. In this paper we consider scene descriptions which are represented as a set of triples (subject, predicate, object), where each triple consists of a pair of visual objects, which appear in the image, and the relationship between them (e.g. man-riding-elephant, man-wearing-hat). We combine a standard visual model for object detection, based on convolutional neural networks, with a latent variable model for link prediction. We apply multiple state-of-the-art link prediction methods and compare their capability for visual relationship detection. One of the main advantages of link prediction methods is that they can also generalize to triples, which have never been observed in the training data. Our experimental results on the recently published Stanford Visual Relationship dataset, a challenging real world dataset, show that the integration of a semantic model using link prediction methods can significantly improve the results for visual relationship detection. Our combined approach achieves superior performance compared to the state-of-the-art method from the Stanford computer vision group.

Many applications require an understanding of an image that goes beyond the simple detection and classification of its objects. In particular, a great deal of semantic information is carried in the relationships between objects. We have previously shown that the combination of a visual model and a statistical semantic prior model can improve on the task of mapping images to their associated scene description. In this paper, we review the model and compare it to a novel conditional multi-way model for visual relationship detection, which does not include an explicitly trained visual prior model. We also discuss potential relationships between the proposed methods and memory models of the human brain. 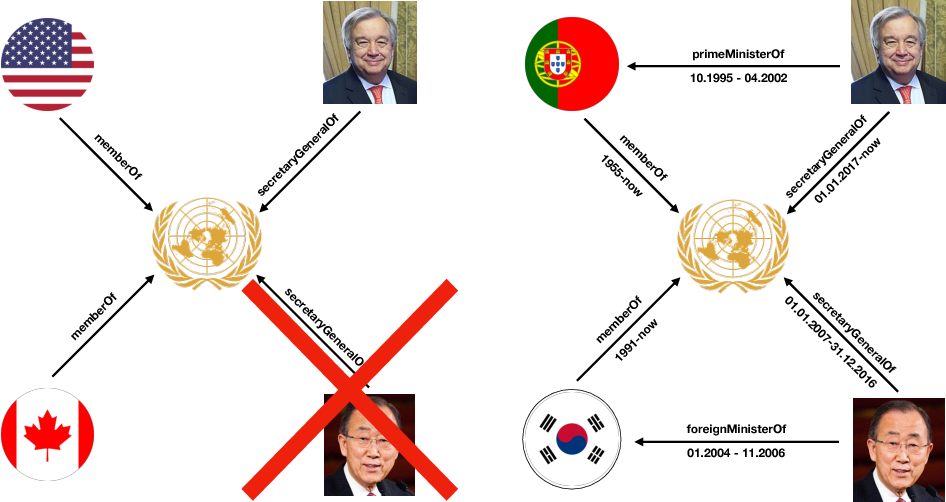 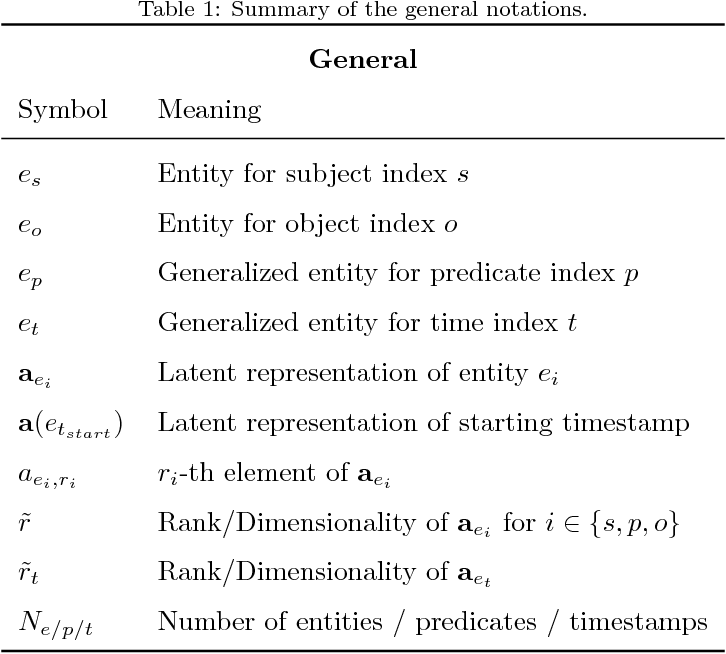 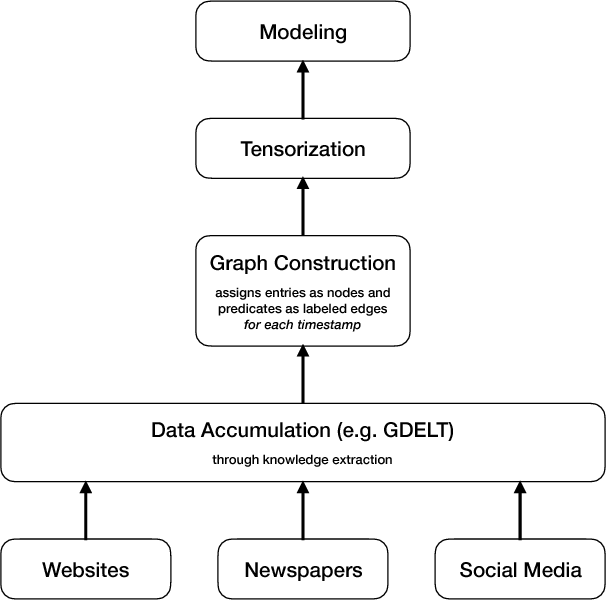 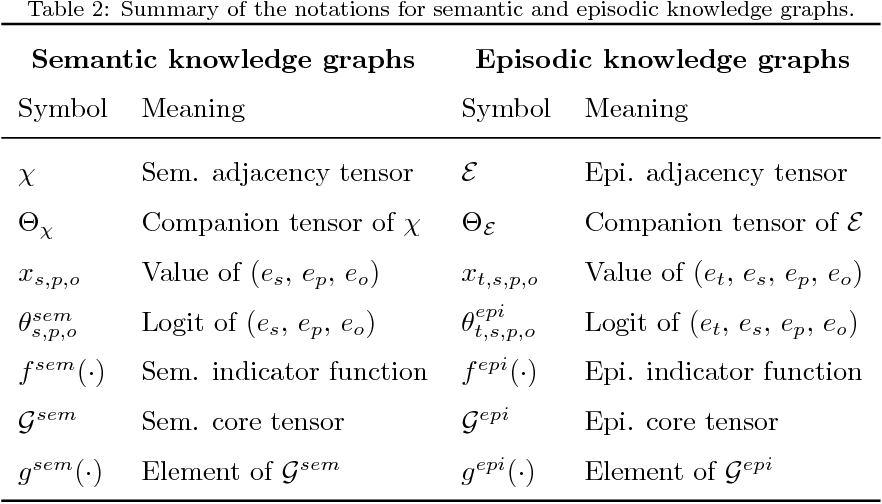 In recent years a number of large-scale triple-oriented knowledge graphs have been generated and various models have been proposed to perform learning in those graphs. Most knowledge graphs are static and reflect the world in its current state. In reality, of course, the state of the world is changing: a healthy person becomes diagnosed with a disease and a new president is inaugurated. In this paper, we extend models for static knowledge graphs to temporal knowledge graphs. This enables us to store episodic data and to generalize to new facts (inductive learning). We generalize leading learning models for static knowledge graphs (i.e., Tucker, RESCAL, HolE, ComplEx, DistMult) to temporal knowledge graphs. In particular, we introduce a new tensor model, ConT, with superior generalization performance. The performances of all proposed models are analyzed on two different datasets: the Global Database of Events, Language, and Tone (GDELT) and the database for Integrated Conflict Early Warning System (ICEWS). We argue that temporal knowledge graph embeddings might be models also for cognitive episodic memory (facts we remember and can recollect) and that a semantic memory (current facts we know) can be generated from episodic memory by a marginalization operation. We validate this episodic-to-semantic projection hypothesis with the ICEWS dataset.

The Tensor Brain: Semantic Decoding for Perception and Memory 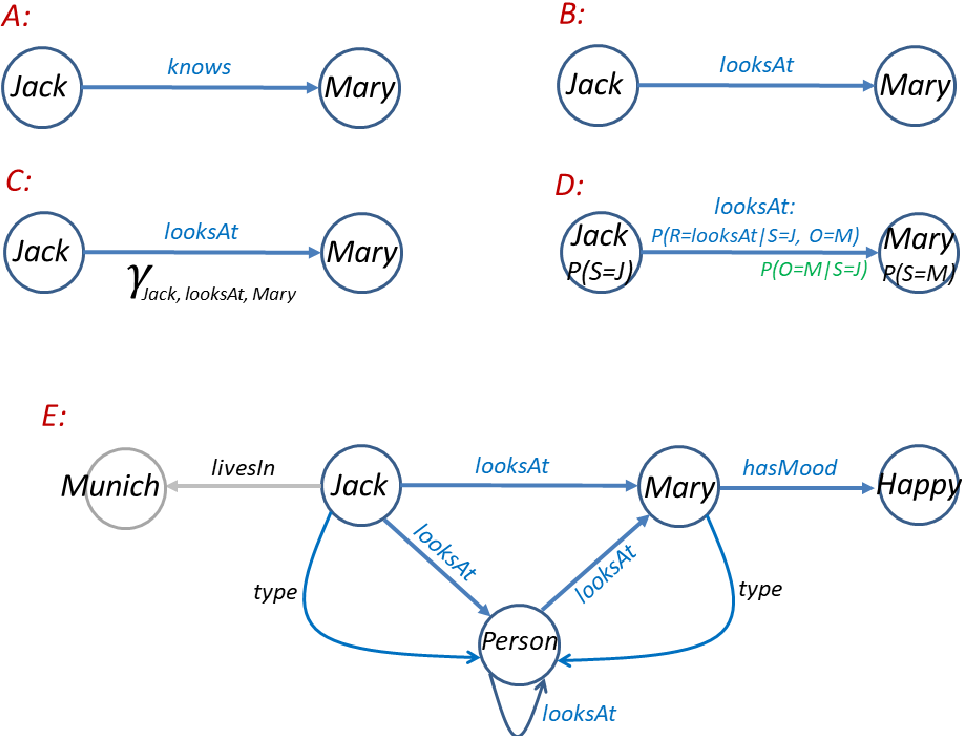 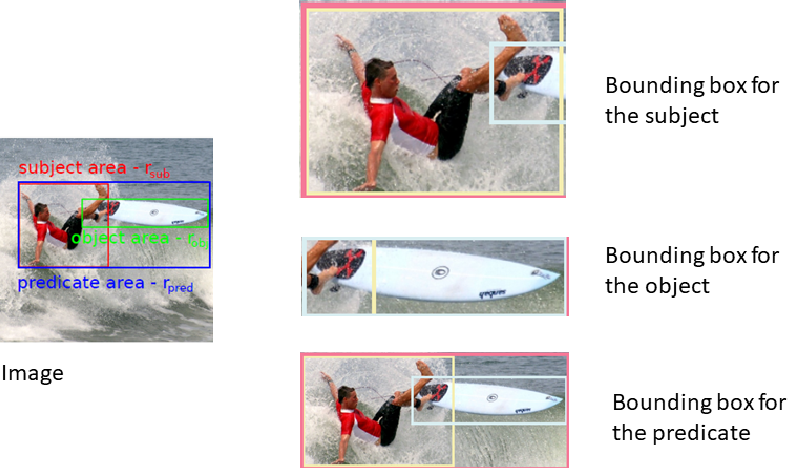 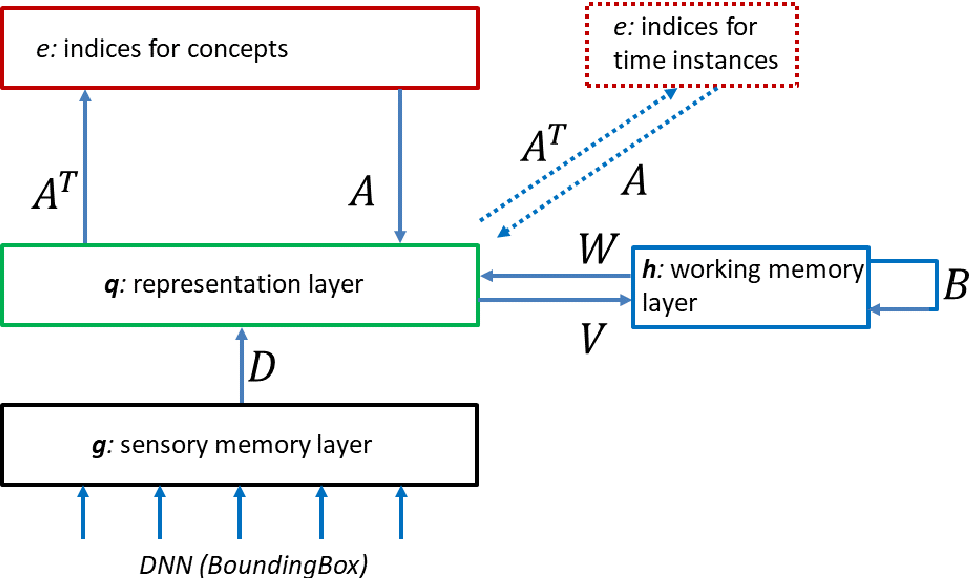 We analyse perception and memory, using mathematical models for knowledge graphs and tensors, to gain insights into the corresponding functionalities of the human mind. Our discussion is based on the concept of propositional sentences consisting of \textit{subject-predicate-object} (SPO) triples for expressing elementary facts. SPO sentences are the basis for most natural languages but might also be important for explicit perception and declarative memories, as well as intra-brain communication and the ability to argue and reason. A set of SPO sentences can be described as a knowledge graph, which can be transformed into an adjacency tensor. We introduce tensor models, where concepts have dual representations as indices and associated embeddings, two constructs we believe are essential for the understanding of implicit and explicit perception and memory in the brain. We argue that a biological realization of perception and memory imposes constraints on information processing. In particular, we propose that explicit perception and declarative memories require a semantic decoder, which, in a simple realization, is based on four layers: First, a sensory memory layer, as a buffer for sensory input, second, an index layer representing concepts, third, a memoryless representation layer for the broadcasting of information ---the "blackboard", or the "canvas" of the brain--- and fourth, a working memory layer as a processing center and data buffer. We discuss the operations of the four layers and relate them to the global workspace theory. In a Bayesian brain interpretation, semantic memory defines the prior for observable triple statements. We propose that ---in evolution and during development--- semantic memory, episodic memory, and natural language evolved as emergent properties in agents' process to gain a deeper understanding of sensory information.

In this work, we propose the first quantum Ans\"atze for the statistical relational learning on knowledge graphs using parametric quantum circuits. We introduce two types of variational quantum circuits for knowledge graph embedding. Inspired by the classical representation learning, we first consider latent features for entities as coefficients of quantum states, while predicates are characterized by parametric gates acting on the quantum states. For the first model, the quantum advantages disappear when it comes to the optimization of this model. Therefore, we introduce a second quantum circuit model where embeddings of entities are generated from parameterized quantum gates acting on the pure quantum state. The benefit of the second method is that the quantum embeddings can be trained efficiently meanwhile preserving the quantum advantages. We show the proposed methods can achieve comparable results to the state-of-the-art classical models, e.g., RESCAL, DistMult. Furthermore, after optimizing the models, the complexity of inductive inference on the knowledge graphs might be reduced with respect to the number of entities.

We propose a novel method for fact-checking on knowledge graphs based on debate dynamics. The underlying idea is to frame the task of triple classification as a debate game between two reinforcement learning agents which extract arguments -- paths in the knowledge graph -- with the goal to justify the fact being true (thesis) or the fact being false (antithesis), respectively. Based on these arguments, a binary classifier, referred to as the judge, decides whether the fact is true or false. The two agents can be considered as sparse feature extractors that present interpretable evidence for either the thesis or the antithesis. In contrast to black-box methods, the arguments enable the user to gain an understanding for the decision of the judge. Moreover, our method allows for interactive reasoning on knowledge graphs where the users can raise additional arguments or evaluate the debate taking common sense reasoning and external information into account. Such interactive systems can increase the acceptance of various AI applications based on knowledge graphs and can further lead to higher efficiency, robustness, and fairness. 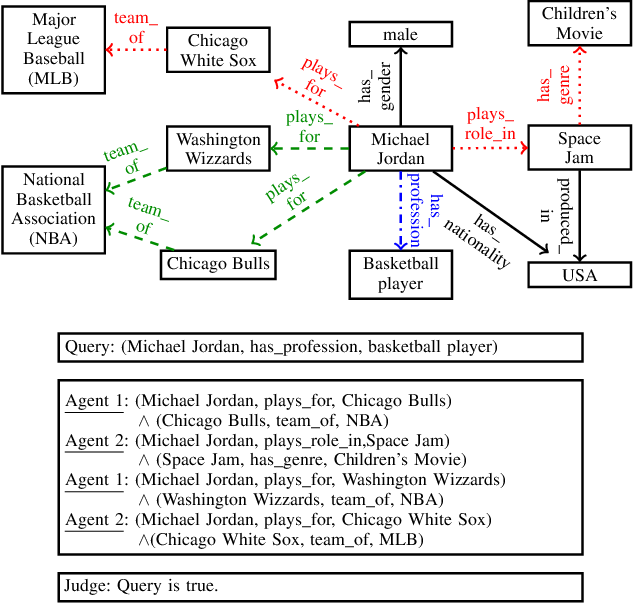 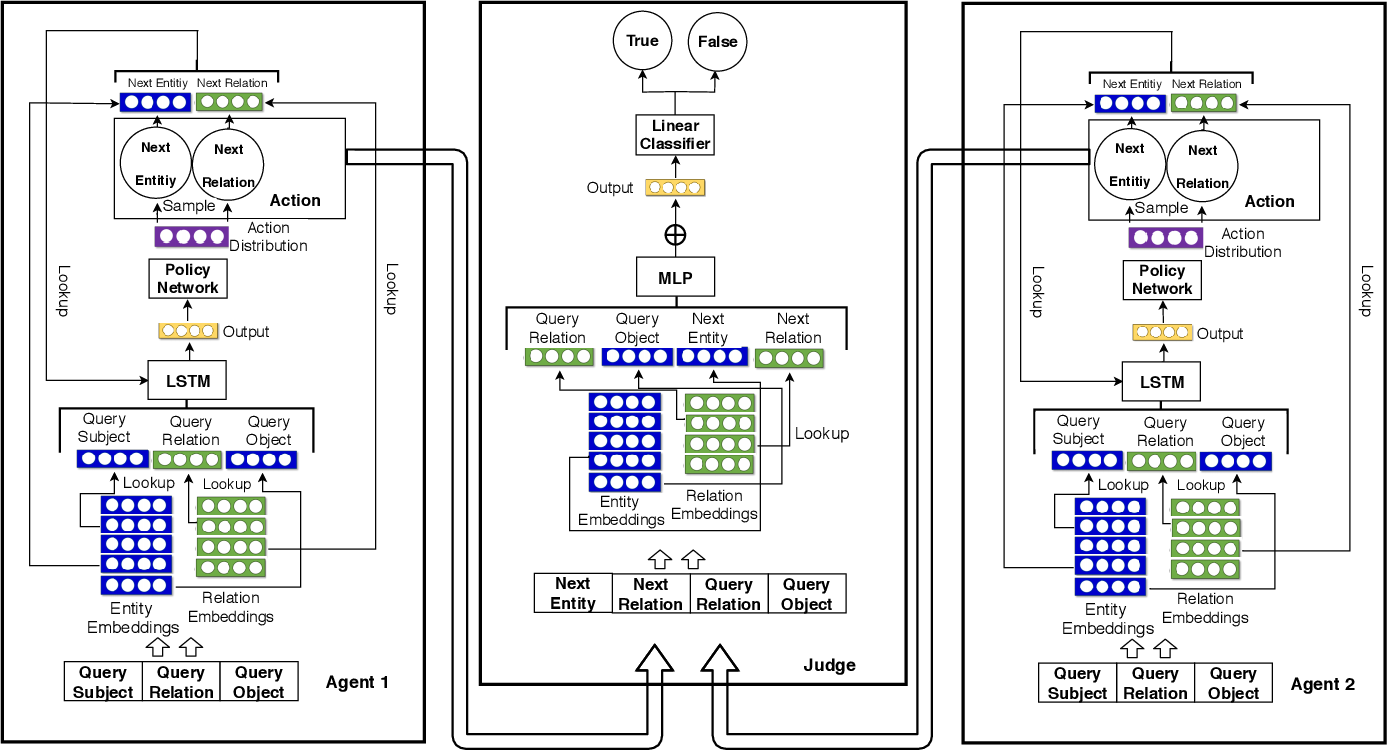 We propose a novel method for automatic reasoning on knowledge graphs based on debate dynamics. The main idea is to frame the task of triple classification as a debate game between two reinforcement learning agents which extract arguments -- paths in the knowledge graph -- with the goal to promote the fact being true (thesis) or the fact being false (antithesis), respectively. Based on these arguments, a binary classifier, called the judge, decides whether the fact is true or false. The two agents can be considered as sparse, adversarial feature generators that present interpretable evidence for either the thesis or the antithesis. In contrast to other black-box methods, the arguments allow users to get an understanding of the decision of the judge. Since the focus of this work is to create an explainable method that maintains a competitive predictive accuracy, we benchmark our method on the triple classification and link prediction task. Thereby, we find that our method outperforms several baselines on the benchmark datasets FB15k-237, WN18RR, and Hetionet. We also conduct a survey and find that the extracted arguments are informative for users.